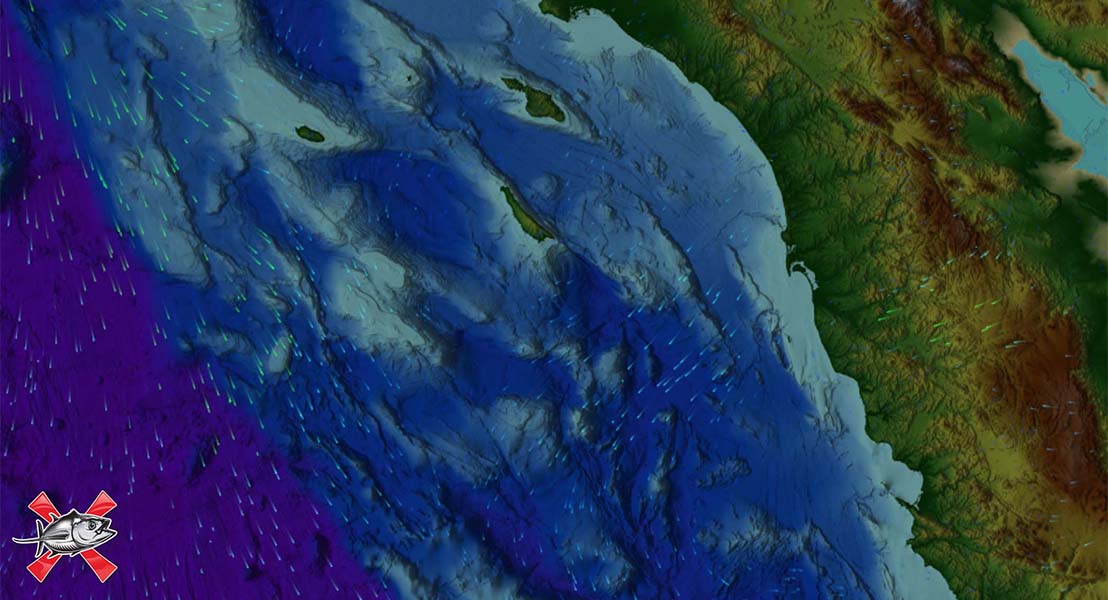 The header shot was taken on the FISHDOPE app and shows Saturday looking pretty nice. So, other than a little bit of wind blowing off Ventura and hitting Anacapa, the rest of the So Cal Bight is open for business. Good luck if you’re heading out this weekend! Please make sure to check the latest weather/ wind forecast and reports as things can change from the predicated quickly.

As for what happened last weekend the Santa Ana wind event definitely lived up to the forecast in most areas. The strange part was that there were also areas with little to no wind, like at my house in Long Beach. I woke up on Saturday morning, stuck my head out the door, and saw that the wind was calm, so I called Jimmy Decker to see if he wanted to go fishing. When he answered the phone in Costa Mesa, I could hear the wind howling in the background and he told me it was blowing 20 to 30 knots. Based on his report, I decided I’d be better off staying at home and watching football.

The weather ended up keeping most guys off the water last weekend, but the boats that did make it out this week reported good fishing. Starting from the bottom up this week, the boats that made the run to Colonet had slow fishing on the yellows but great fishing on big rockfish, like these caught aboard the Tribute on their last 1 1/2 day trip. In other southern news, no one has managed to reconnect with the bluefin tuna below San Diego, but I think that is more likely due to a lack of fishing effort than a lack of fish.

The only real game in town for the local sport boat fleet continues to be bass and sculpin on the local reefs and depending on where you go, it seems like the bass to sculpin ratio changes. Your best bets for finding good bass fishing right now are out of San Diego and Marina Del Rey. While the boats in between are catching bass as well, the fishing hasn’t been as good, so you’re probably going to be catching mostly sculpin.

The halibut have been biting a little for the guys that have been targeting them. The fishing along the coast is a little on the slow side for this time of year according to the halibut special trips that are running out of Dana Wharf Sportfishing. Private boaters are having better success on halibut in shallow water around Catalina Island and shallow along the Ventura County coastline. Private boaters fishing along the coast have also been reporting decent sand bass and calico fishing around the deep-water stones and wrecks.

No one gave San Clemente Island a look over the weekend due to the wind, but I’d guess that the bass bite should have improved a bit since I was there a couple of weeks ago. If you’re planning to head over and fish Clemente this weekend, you’re going to be limited to the west end and middle backside as the navy has all kinds of exercises happening over there right now. The good news is that you’ll have good weather there all weekend long.

Good luck to everyone and be safe.