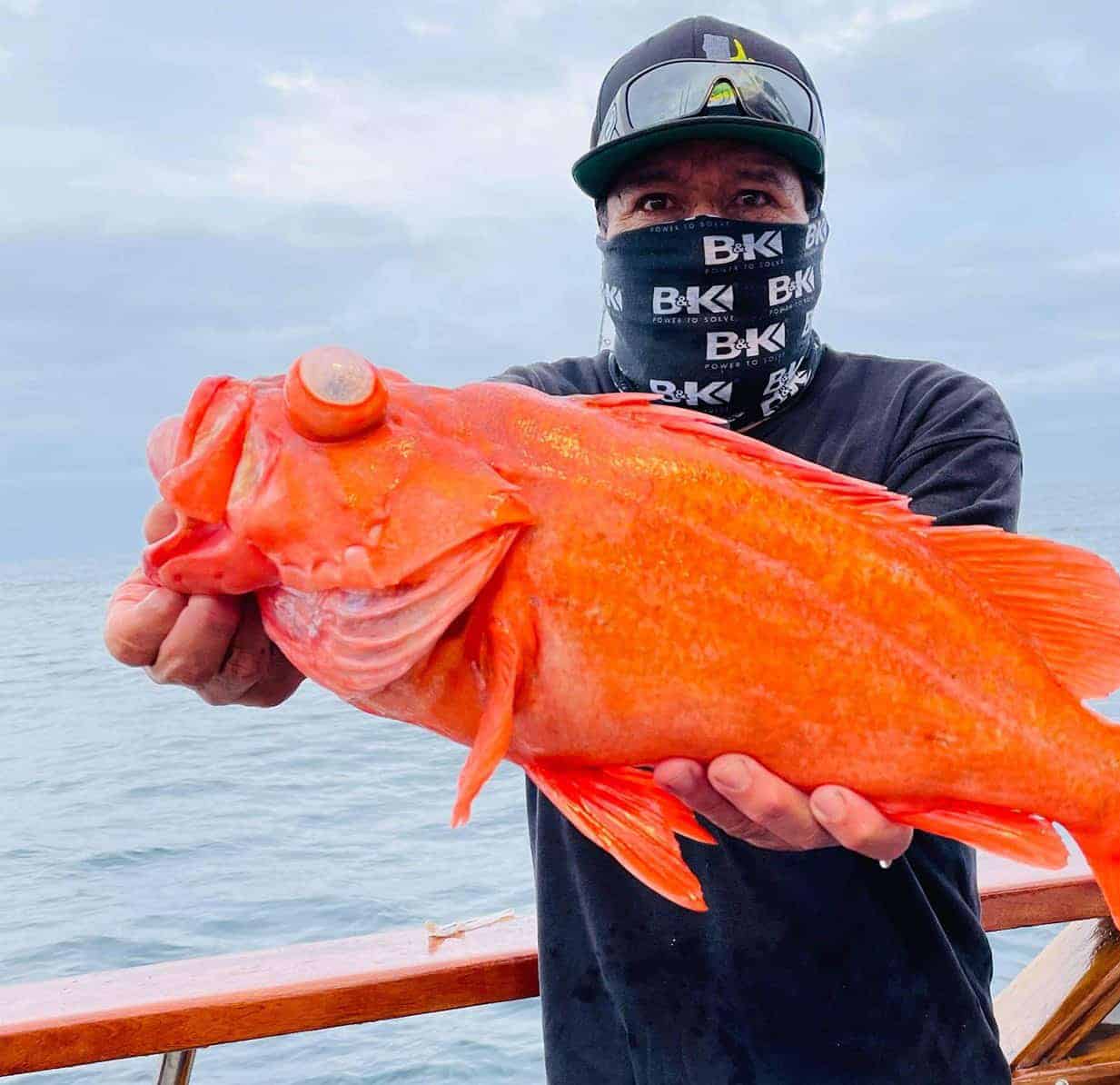 Reports have been a little thin this week as the weather has kept most boats off the water, but the good news is that the storm should be cleared out by the time you read this, and the weekend fishing opportunities look good. 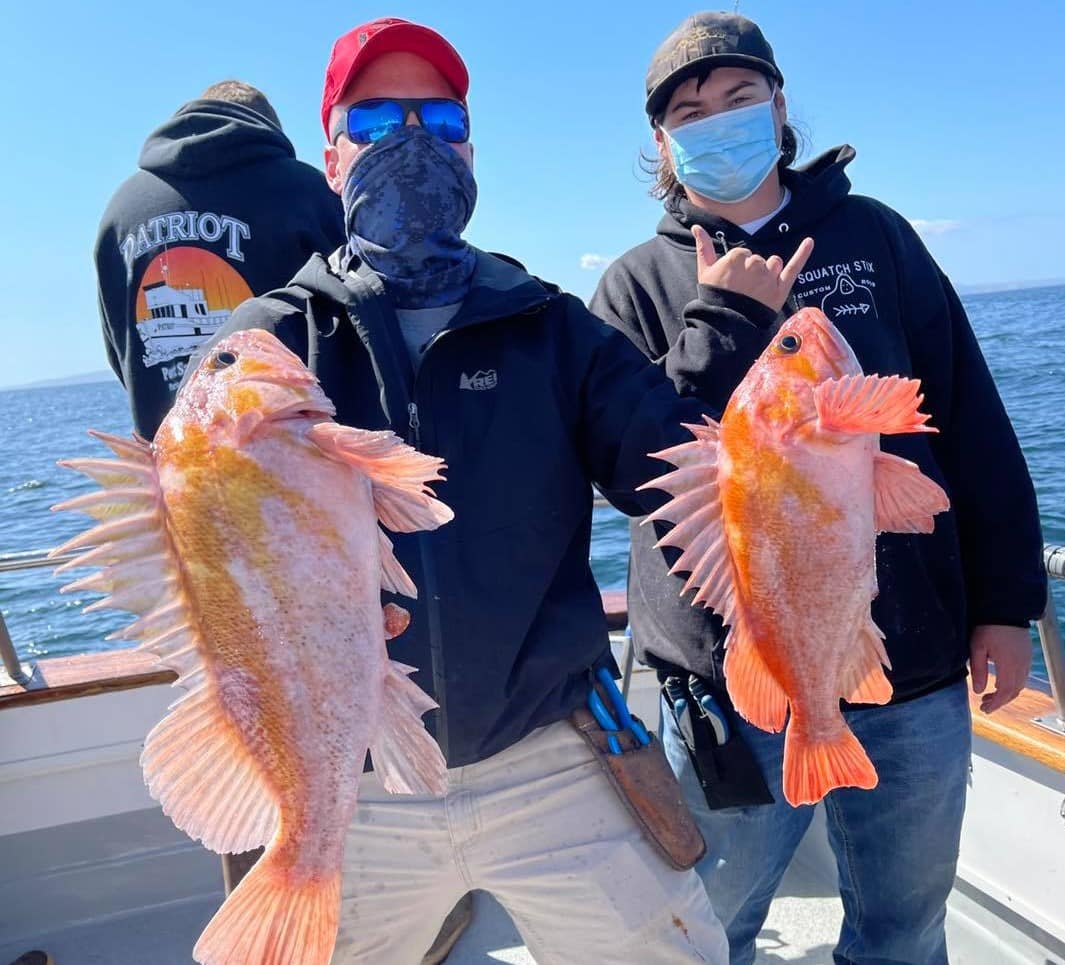 Before I get into the fishing, I’d like to break down what we’re looking at weather-wise this weekend. First off, the weather looks nice along the coast from Point Conception to San Diego. There will be some wind around the Channel Islands this weekend with Miguel and Rosa looking blown out both days while Cruz and Anacapa look fishable on Sunday. It’s windy enough at Nic that I’d be surprised if anyone made the run this weekend. Santa Barbara Island is windy on Saturday but okay on Sunday. Clemente will be too windy for private boats on Saturday but looks sportboat fishable all weekend. Catalina Island will be fine, as will the Coronado Islands, the offshore banks around San Diego, and all the way down to Colonet. 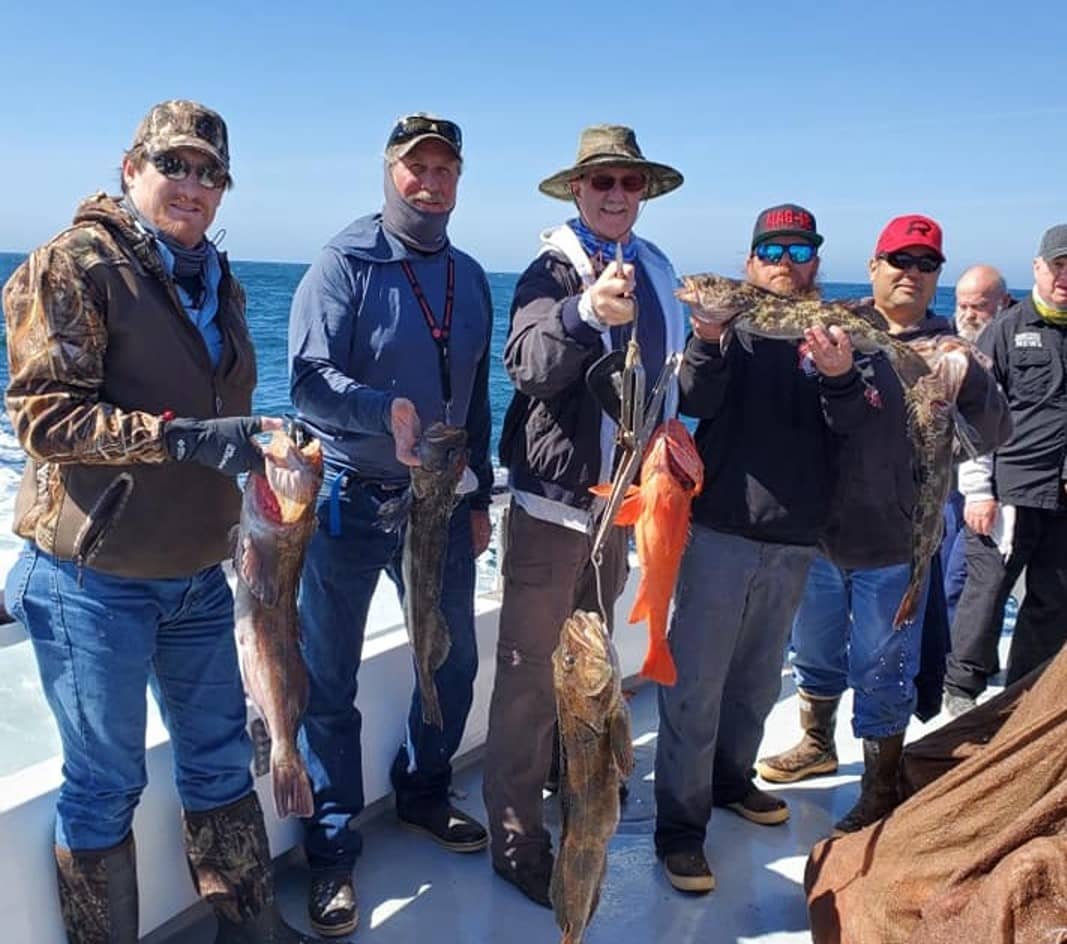 Starting up north, while the outer islands may be out of play, there is still plenty of good fishing to be had along the coast of Santa Barbara. If you’re heading out on a sportboat up there, or anywhere else, this weekend you’ll want to make sure and bring a rod and reel that is capable of fishing water up to 600-feet deep. You’ll also want to bring along heavy enough sinkers to fish that deep. If I were heading out, I’d make sure and have 8, 16, and 24-ounce torpedo sinkers in my box. Most trips aren’t fishing that deep but the heavier sinkers can also come in handy if there’s a fast drift due to wind or current.  Boats fishing in that area have been doing well on reds, coppers, and lingcod. 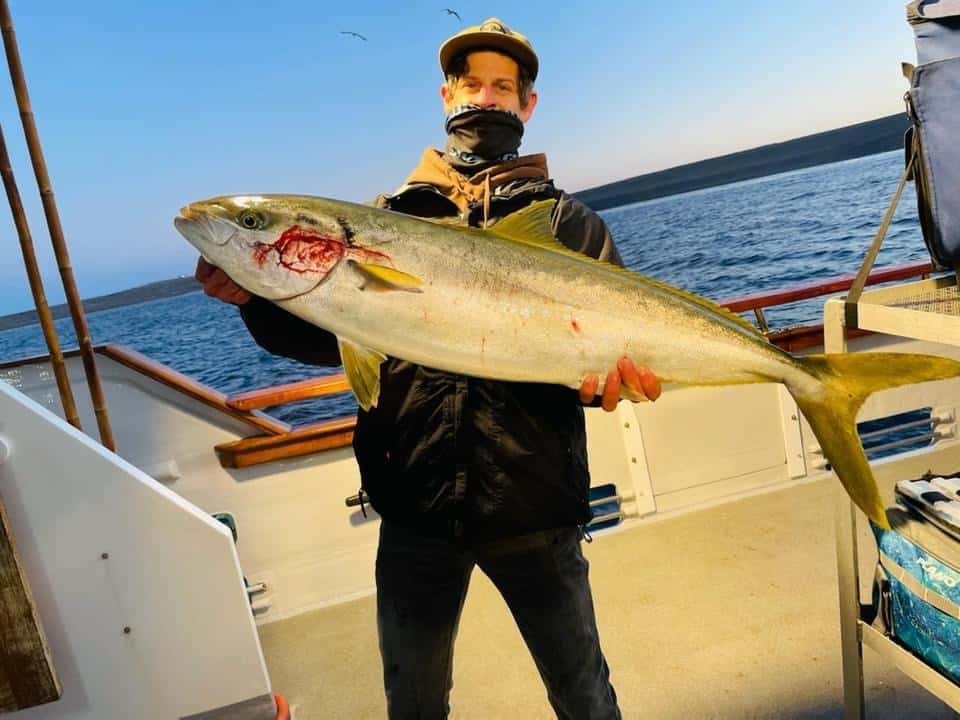 San Clemente Island kicked out a few big yellows for the Thunderbird out of Davey’s Locker on Saturday but it was too rough to get up to the area where they were biting the rest of the week. Despite the weather, the boat scored limits of rockfish with lots of big reds in the mix. With improved weather in the forecast (at least on Sunday) there is a chance that they might relocate those biting yellows and even if they don’t, the cod fishing should be pretty good. 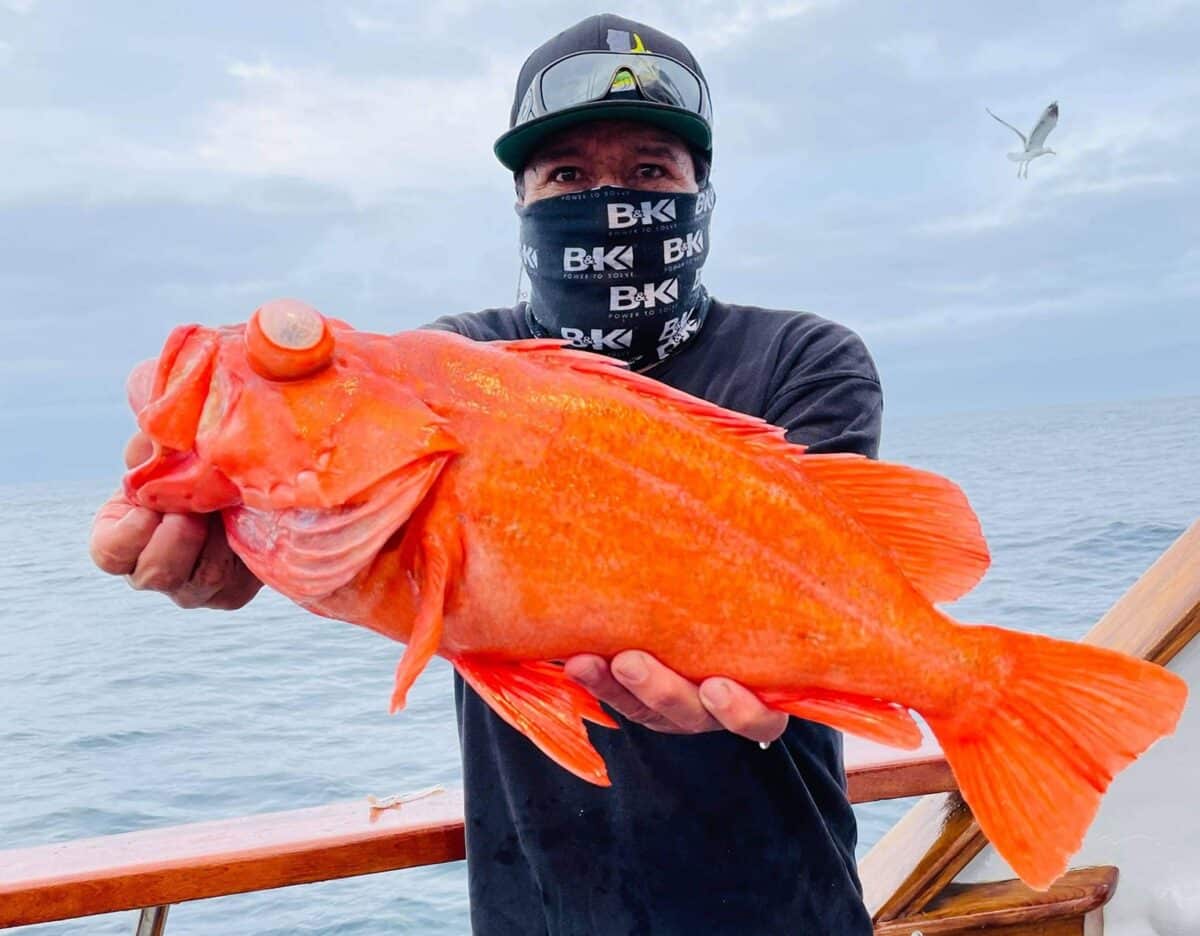 Boats fishing Catalina have been getting some good scores on reds and other rockfish as well and live or fresh dead squid has been the key to catching quality fish. If you’re a private boater looking to make an island run to fish rockfish this weekend, Catalina is your best bet. I ran past the east end of the island on my way home from the cod opener at Clemente and saw a bunch of boats stacked up on the east end. The fleet consisted of a couple of sportboats with a bunch of private boaters floating randomly around them. If you’re taking your own boat out, I’d avoid these situations as they’re not productive. The sportboats are fishing very specific spots, so if you set up near them you’re probably not going to be catching much. If you’re going to Catalina, I’d suggest running up the backside a ways and looking for small isolated structure in 200-300 feet of water as you’re more likely to find reds in that zone. With today’s charts, those small spots are very easy to find if you look for them. 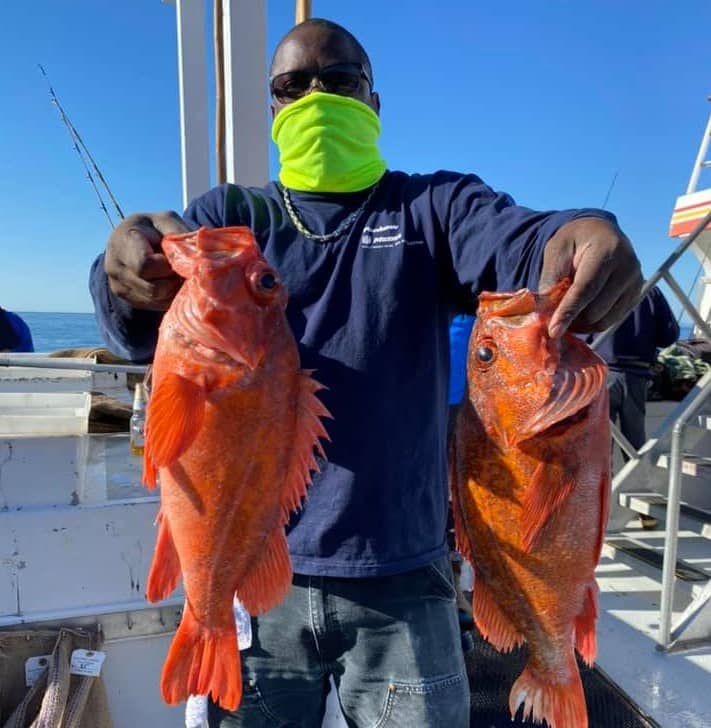 Boats fishing along the coast are also catching rockfish but the reds are usually smaller, fewer, and further between. There hasn’t been much focus on the bass fishing lately but the guys targeting them have been catching a few. I fished along the beach out of Newport on Saturday and it was slow and rough enough that we gave up after just a couple of hours. Speaking of rough, the area where the bluefin had been showing off San Diego has been blown out all week but with better weather in the forecast, I’m hoping that the guys heading out there find some biting fish. The same holds true for the boats that will be running down to fish Colonet this weekend. It would be great to get some good offshore fishing news!