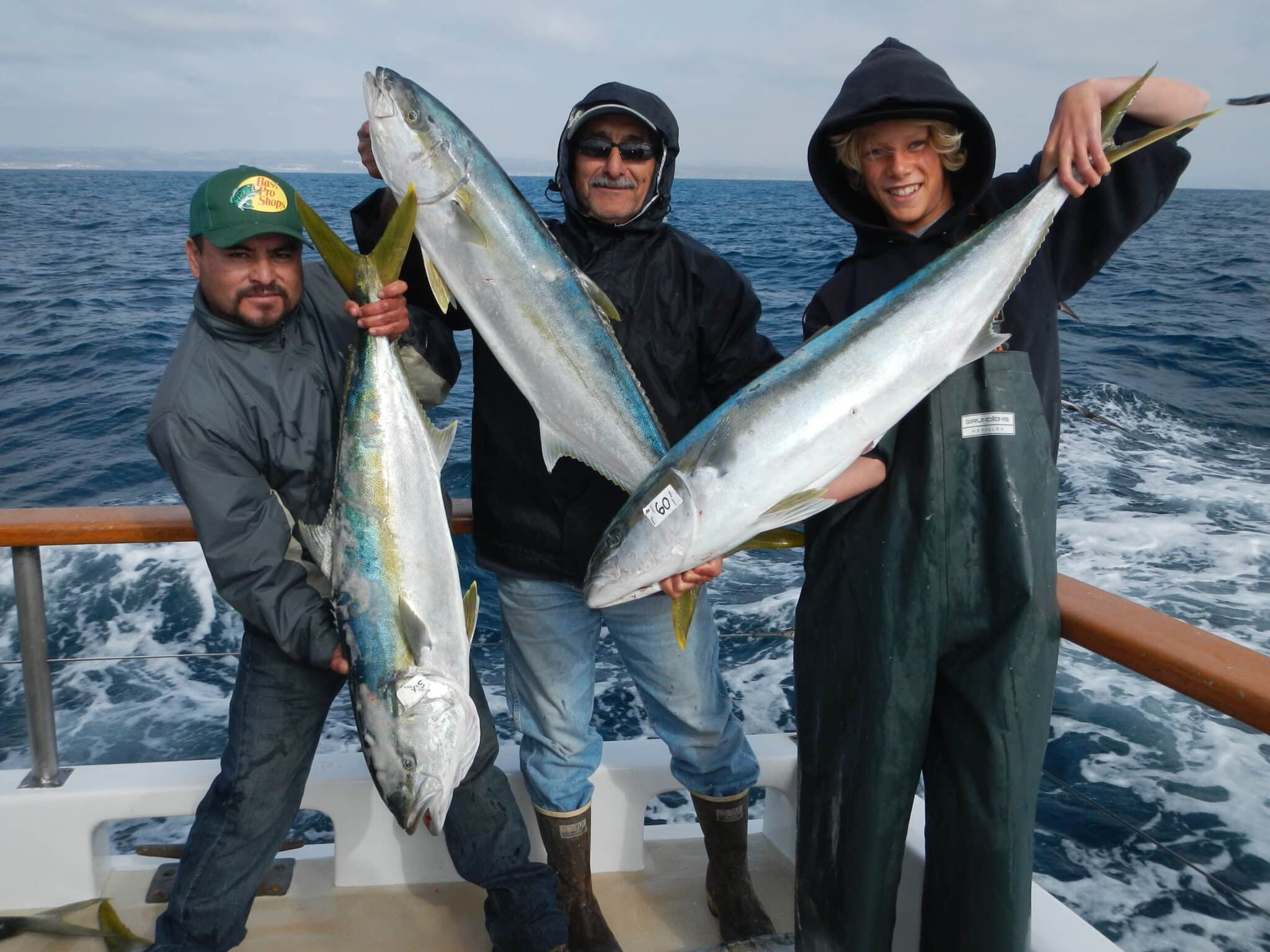 I mentioned in last week’s post about how there was an early season yellowtail taken last weekend aboard the Spitfire.  That fish was totally a random bite that happened while rockfishing.  It’s not the kind of thing that happens often, but it happens.

It’s one of things I love about the fishing we do in the ocean.  You never know what might bite. 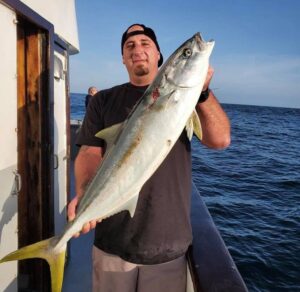 Well, it happened again this weekend!  On Sunday (March 14th) aboard the Toronado out of Pierpoint Landing in Long Beach.  The boat was at San Clemente Island rockfishing.  Owner/operator Joe Phillips reported that they were having a successful download on big reds.  My buddy, Ryan Kruskamp, was on the boat.  He was bouncing an Ahi jig on the bottom targeting lingcod and got the big bite…just not the one he anticipated.  Ryan didn’t get the target ling but instead scored this nice 20-pound yellowtail (right).

While these random catches are fun and hopefully a sign of things to come at this early point in the season, they’re not a full-fledged bite.

That situation may have changed further down the coast and across the Mexican border. 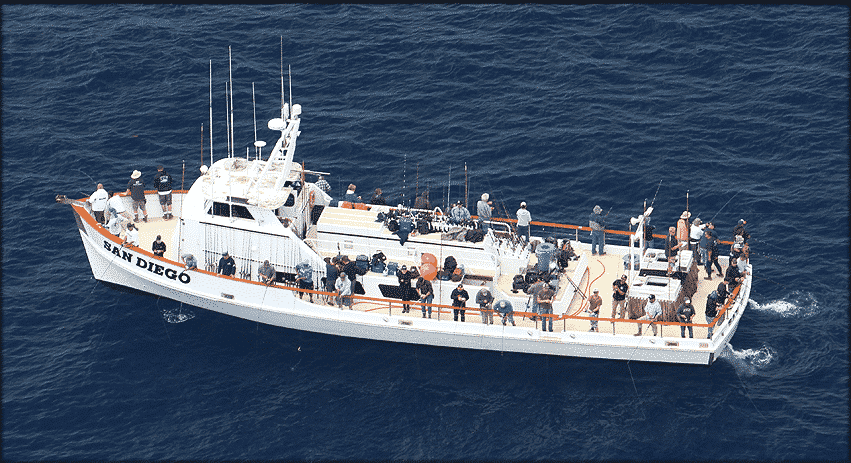 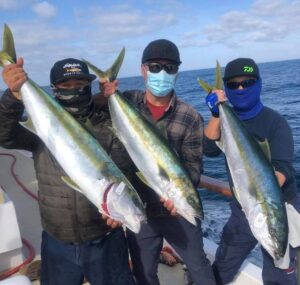 The San Diego had recently returned to service and were back at their normal fishing grounds around the Coronado Islands.  Sunday morning Capt. Ryan Bostian called in a count of 25 yellows with half their day still to go.  By the end of the day, they tallied 47 for 34 anglers with 80 rockfish and 20 whitefish thrown in for good measure.  Unfortunately, due to weather, the boat won’t be back out until Wednesday, but Sunday’s trip was the first good yellowtail hit since the majority of the fleet got back on the water the first of this month.  Ryan reported that most of the fish were taken on full-size heavy yo-yo jigs (Salas 6X, Tady 4/0, etc.), so get your yo-yo gear in order, bring your passport, and sign up.  This weekend’s trips are already sold out, so plan ahead.

Speaking of weather, I wanted to try and get out to the islands last week, but wind and rain continued to be an issue.  I don’t typically like to ride weekend trips, but it was the only decent fishing window last week.  I decided to stay local.  Saturday morning, I got out with Capt. Andy Siratt on the Enterprise out of Pierpoint.  Andy told me that other than the opener, he and the rest of the local boats had been having a tough time of it so far this season.  I haven’t really had the opportunity to fish the area off of Long Beach that much though this year, so I came out anyway. 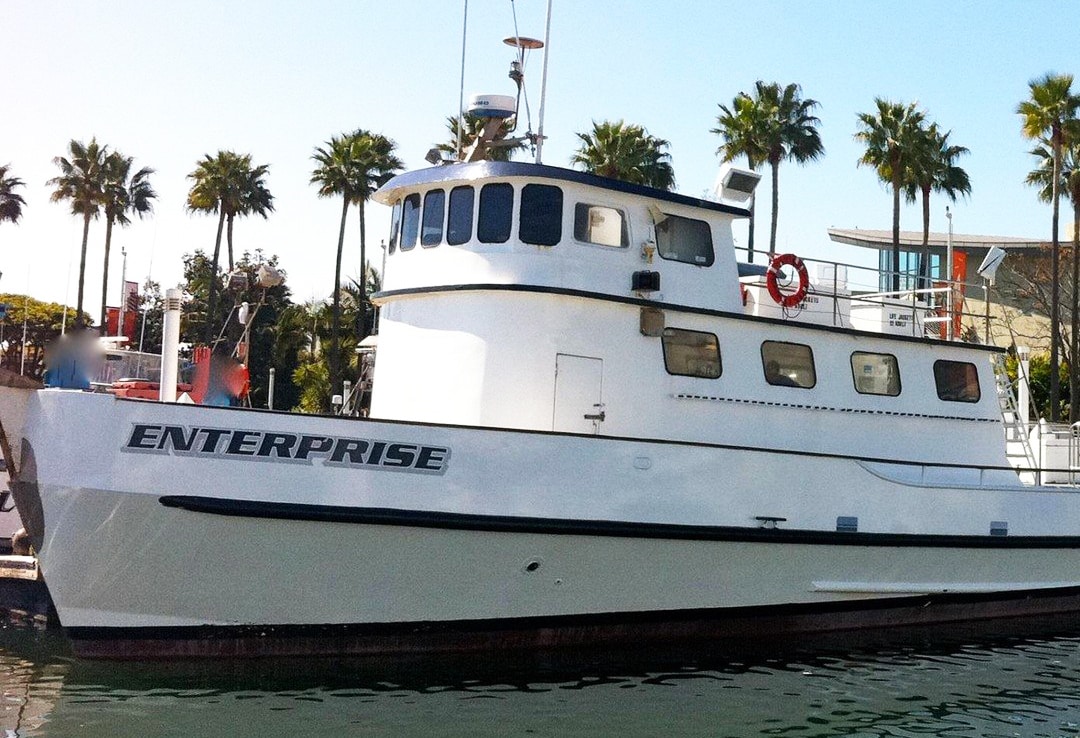 Back when the kids were still young and would come out fishing regularly with me, we’d come out and ride on the Enterprise as a change-up to our home boat the New Del Mar in Marina del Rey.  I remember Andy telling me about various “exotic” species of rockfish that he would catch in the area before the depth limits were raised to protect cowcod.  This year, with the cowcod population rebuilt and the depth limit lowered to 100 fathoms (600-feet), I was curious to find out if Andy would be fishing that deeper water again.  He said he would, so that was enough of a draw for me to check it out.

Sure enough we started the day at the full 600!

I recently picked up a Fathom 25NLD2 and spooled it with Shimano Depth Hunter braid.  The braid has a black section every 5 feet, and a full-color change every 100 feet.  Knowing we’d be rockfishing all day, I only brought 2 setups.  I paired the Fathom with a Fishing Syndicate FSC 800M (composite glass/graphite rod rated 20-50#) and for fun brought out the Inshore Series FSG 800M (all graphite) paired with a little Okuma jigging reel to play with jigs if we fished shallower.

Well sure enough, in that deeper water, I counted out 6 color changes.  Lead deckhand Connor Cassota (right) told me that since the start of the season, with the new depth limit in play, they’ve been catching cowcod on every single trip.  As if on cue, a guy fishing off the stern hooked one on the first drift of the day.  The boat had a release device rigged up though and the fish was let go unharmed.  As the day progressed, all those other exotic rockfish species came into play…boscos (aka aurora rockfish – right), bank perch (they called them speckles here), Mexican rockfish, chilipepper rockfish, etc.

Last week on the Tortuga trip, it was difficult to find other rockfish to fill the sack after getting 5 reds.  This week, the reds were the difficult ones to find.  I wasn’t looking to take home a lot of fish this trip, but I did keep a couple of those chilis as they’re an especially good rockfish to eat.  I would’ve kept some bank perch, but I didn’t manage to get any though.  Bankies are in my opinion, the absolute best-eating rockfish out there, and there were some nice-sized ones that made it into the sacks.  Just guessing, but I’m going to say it was about 5 rockfish per angler while fishing at those greater depths.  I did my part helping the crew fill a cooler to hand out extra fish at cutting time.

We finished the day in the shallower water closer to home.  Andy was targeting whitefish to fill out the sacks.  The first two spots didn’t produce,  The third was another story entirely.  I nailed a big sculpin at the outset.  After that though, I wasn’t getting any of the target species.  I could feel them down there though pecking away, and I was losing a lot of squid strips.  It was bugging the heck out of me that I was feeding the whitefish and not catching any.  There was still a little time left, so I quickly downsized my hooks to size 2 J-hooks (vs. 1/0 circles).  That was the ticket!  I quickly put 4 on before Andy called the trip and started home.

Andy had to really work hard and hit a lot of spots to scratch out a good day for the boat.  I definitely appreciated the effort, and the count showed it relative to the other boats fishing in the area on Saturday.  Thanks also to the crew, Connor, and Zeke on deck, and Johnny in the galley for taking good care of us on this trip.

I’m going to get my first island trip of the year this week.  Hopefully, the weather cooperates.  I’ll let you know how it goes.  Good luck if you get out there.