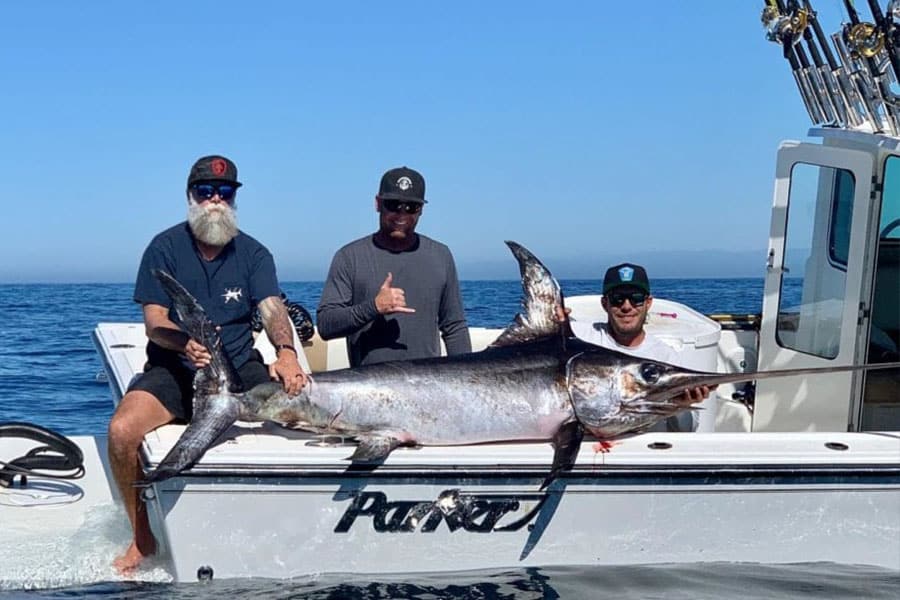 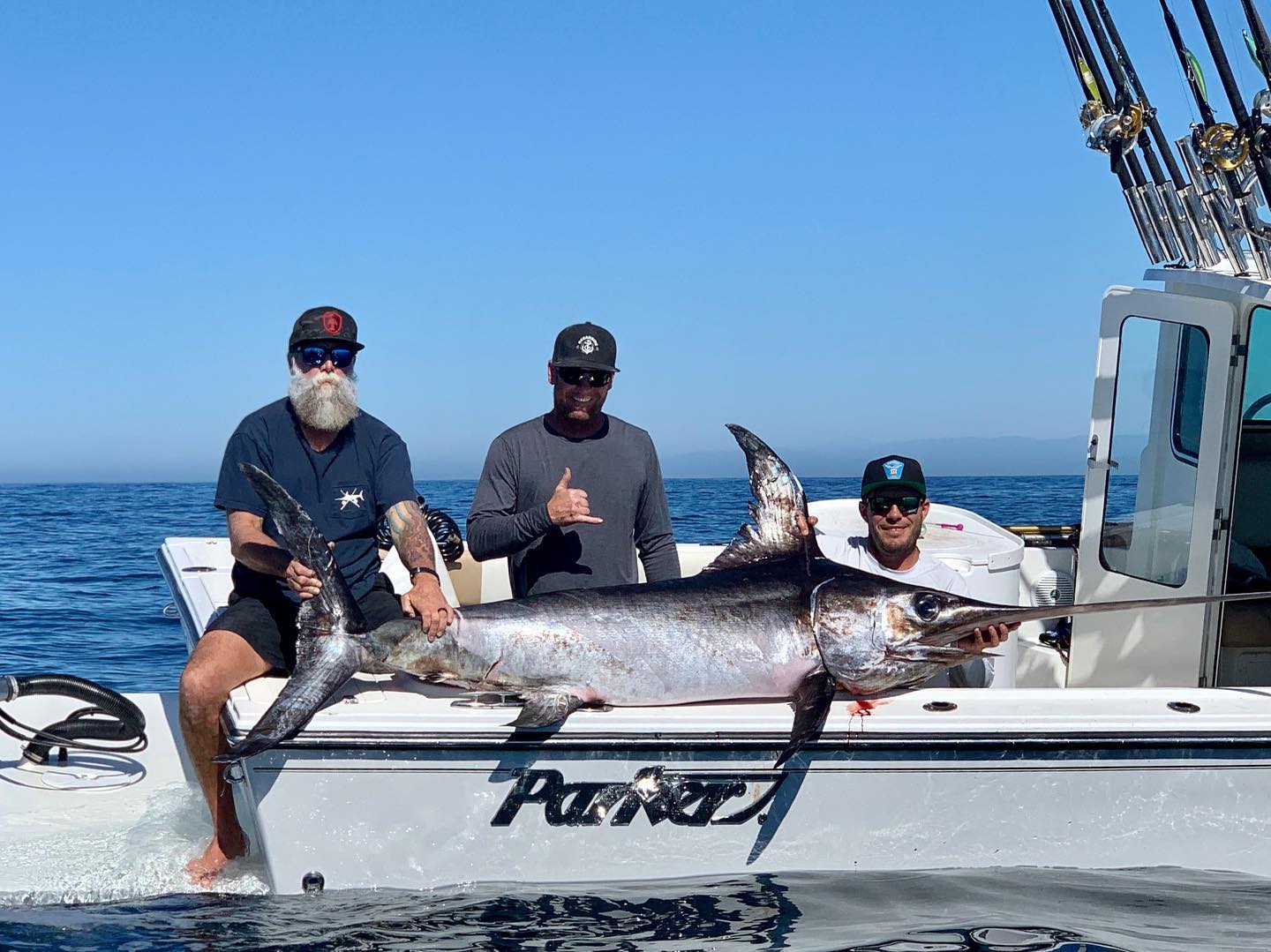 It’s been another steady week of offshore fishing from Catalina Island to below the Mexican border. This swordfish, caught by Lawrance Quigley, while fishing with Jay Krist was one of a dozen or so that were caught this week. There were fish caught all over the place but this week’s hot zone was down in San Diego. I dedicated a few hours to deep-dropping after trolling marlin on Saturday morning but didn’t connect. The good news is that my buddy Curtis Owens waited a respectable amount of time after I left to catch one in the same zone later that day. When it comes to swordfish, it definitely seems like the guys that are willing to put their time in, and fish all day when they do, are the ones getting bites.

I might need to start taking ADD medication so that I don’t go nuts after a couple of hours of rod tip watching. 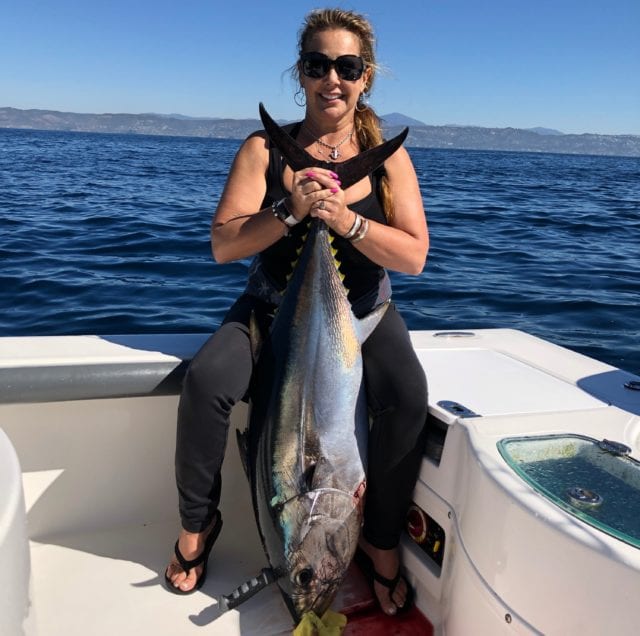 Speaking of going nuts, the coastal bluefin did that for Jimmy Decker on, yup you guessed it, Monday. This is the third Monday in a row that Decker has scored bluefin within a few miles of the beach. This week he brought his wife Tracy and they launched at 9:00 a.m. and were back in the harbor by 2:00 p.m. with three 60-pound class fish. Decker told me there were plenty more around to be caught but he already had more fish than he wanted to process.

After taking Tuesday off due to having to work all night, Decker went back out on Wednesday and drove past the boats not catching anything in the area that only seems to bite on Monday, he headed out to the east end of Catalina and landed several nice yellowfin. Speaking of nice yellowfin, a really nice one was caught earlier this week by a boat trolling a cedar plug off Long Point. The fish was brought to the pier in Avalon and weighed a whopping 221-pounds. There were several reports of other large tuna hooked and lost in that area so I guess the big yellowfin are trying to give the bluefin a run for their money. 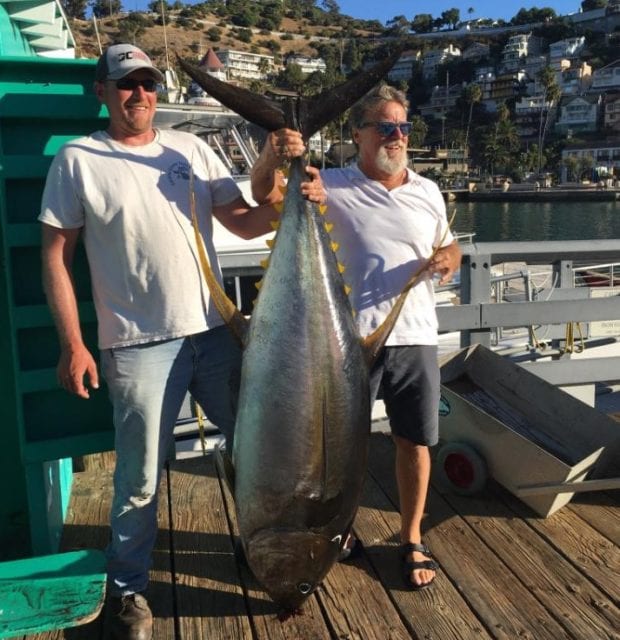 The sport boats have been getting in on the Catalina tuna action as well and on Wednesday the Enterprise out of Pierpoint Landing went through a bunch of lost fish to end up with a couple of yellowfin and a striped marlin. Both the yellowfin and bluefin have been moving around quite a bit following bait schools but almost all of the bites have come in relation to the local banks or along the edge of the coastal shelf. The guys who have been catching them, like Decker, have been doing quite a bit of driving around and checking high percentage areas for signs of bait and birds. 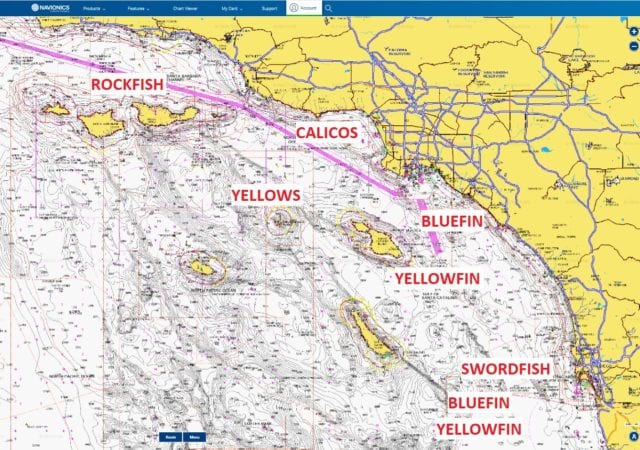 Let’s take a look at this week’s Navionics Chart to see what else is happening. The weather hasn’t been great up north this week and the boats that have been getting out are mostly targeting rockfish. I fished the coast off Malibu on Sunday and it bit about as well as it could given that we were frequently getting hammered by 20+ knots of Santa Ana winds. The yellowtail are still biting at Catalina and the Dirt Clod and I’m sure they’re probably still biting at San Clemente Island but I haven’t heard any recent reports. The wind is also blowing out at Cortes and Tanner but once it lays down I’m sure the yellows will be biting and boats may also relocate some of the bluefin that have gone MIA from the backside of Clemente. 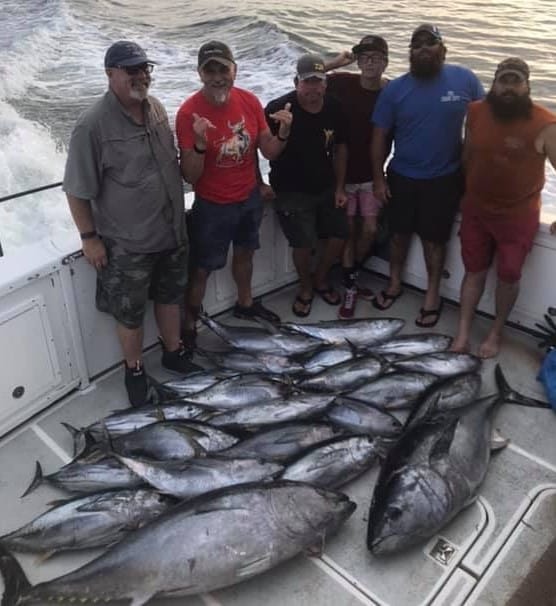 I really liked this photo that Sauerfish Charters posted earlier this week because it pretty much sums up what’s been happening of San Deigo lately. Boats are catching a mix of nice sized yellowfin, big skipjack and there are enough bigger bluefin around to make things interesting. Weather for the weekend looks pretty good in most areas as the Santa Ana winds are supposed to blow themselves out on Friday and make way for a Catalina Eddy that should produce calm winds in most areas but there will be some south wind along the coast in the morning. Good luck this weekend! 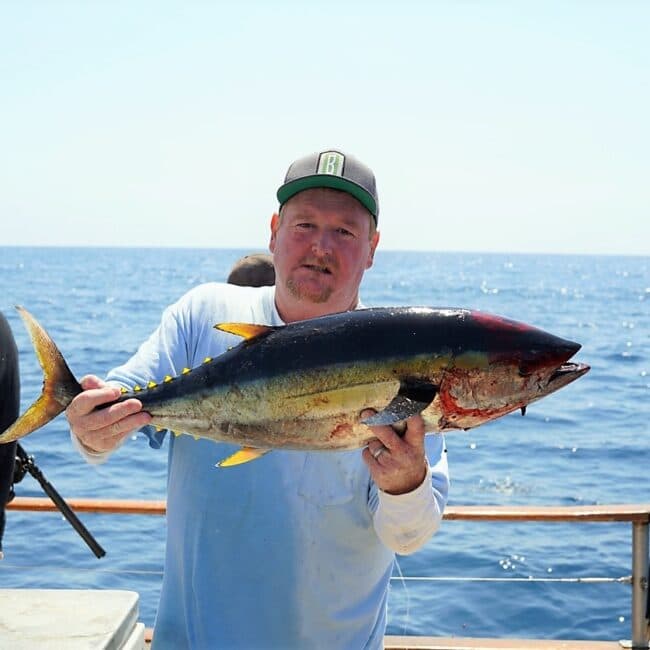