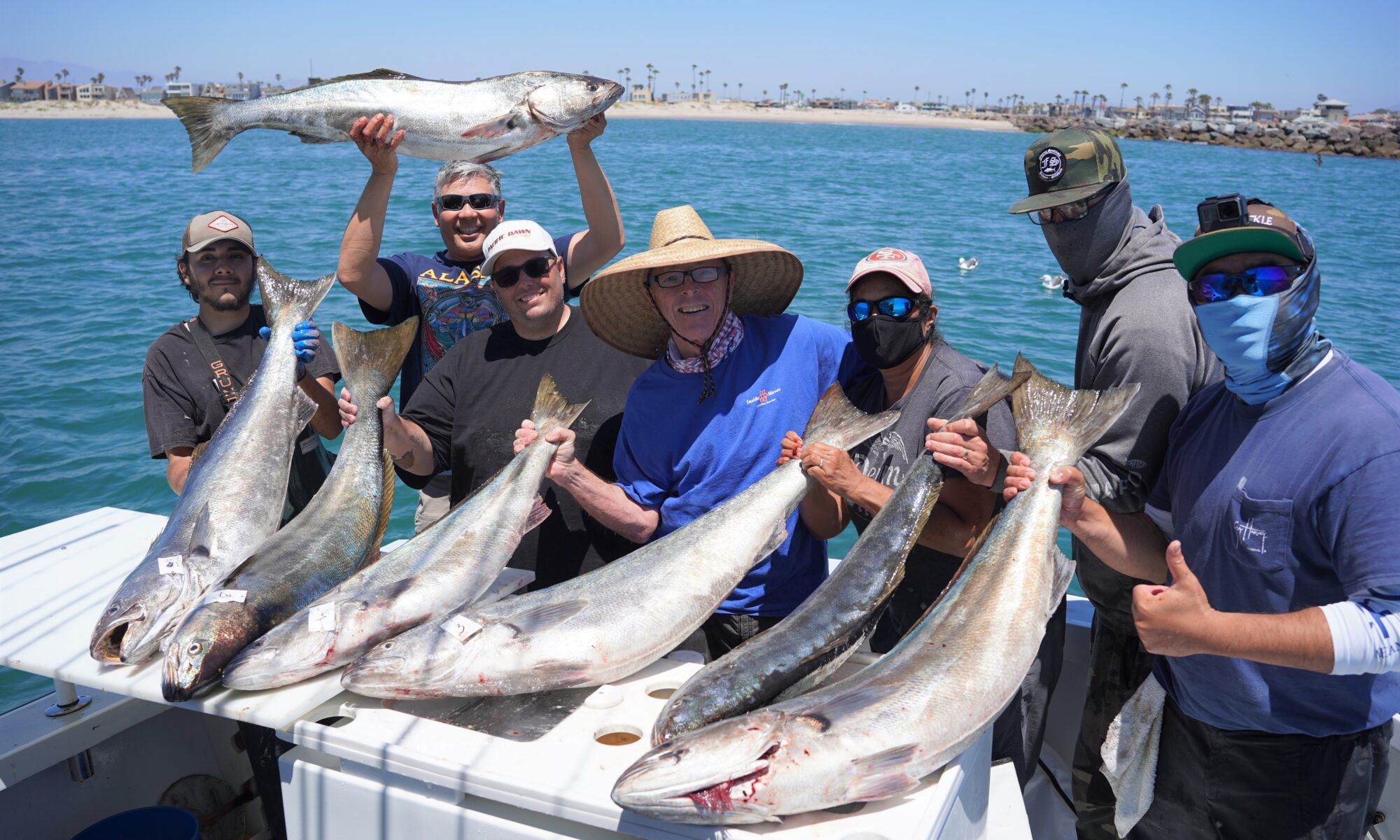 I had a pretty full week this last week. Lots of ground to cover, so I’ll be brief.

I had a couple of industry events last Sunday (June 27th). There was the BD Outdoors – Yellowtail Shootout. I talked to BD boss Ali Hussainy there. Ali said about 80 boats/teams entered the tournament this year which he was a little surprised about but very happy with the turnout. Team Seament took the big fish jackpot with a fish that weighed in at just under 37-pounds! I know where they caught it because my buddy Rony Somo told me. Rony took second place with a 28-pound fish and called in his buddy who caught the big one. Nice guys finish…well not last, but second in this case.

From there it was on to Dana Landing for the Captain’s Meeting of the Tuna Wars event put on by Friends of Rollo. This event was pretty cool, I was at the Fishing Syndicate booth when Capt. Dave Marciano of Wicked Tuna showed up with his wife Nancy (right).

It felt like a mini-Fred Hall with the various vendor booths. It was great to have the opportunity to see many friends in our fishing community and network with industry people. Although Dave is the fan-favorite, the event was won by Team Wicked Pissah led by Capt. Paul Hebert. The winner was determined by a combined weight of the 3 biggest fish. Team Wicked Pissah edged out Team Hard Merchandise with a combined total of 514-pounds vs. 483-pounds.

Had to duck out of the Tuna Wars event early to get onboard the Ocean Odyssey out of H&M Landing. I’d met Capt. Rick Scott before, but never had the opportunity to fish with him until this trip. It’s hard to get on this boat because it rarely runs open-party. Their schedule is typically chartered up for the whole season. I was able to get on this trip though because it was a Fishing Syndicate sponsored trip.

When I was last offshore a few weeks back on the New Lo An, the bite was just off Ensenada. Since then, the bite has migrated north and was concentrated right around the 302 on the west side of the Coronado Islands. Our fishing day was Monday, June 28th. Very slow fishing. Only 6 fish were caught for the trip. I fished hard, but couldn’t buy a bite. I speculated that given how close the fish were to San Diego, that the schools got pounded over the weekend by the fleet, plus an armada of private boats.

Oliver Solis of Fishing Syndicate (left) got one fish throwing a Colt Sniper into a foamer off the bow. There was one guy on the boat who got a limit fishing a sinker rig religiously despite what Rick had to say about the fish being up or marking deeper down in the water column. What was different about him was he got bit going 60# mainline to 40# fluoro at the business end of his setup. Typically, you’re going to fish the sinker heavier, but he made it work. I guess it’s what needed to be done to get a bite given the circumstances.

I was going with a working title of “Don’t Be That Guy” for this article because of a couple of things that happened over the course of the week. The first DBTG occurrence was when we got into the night fishing portion of this trip. An older gentleman decided he was going to tie a flatfall onto his 40# flyline setup, despite warnings from the crew. BAD IDEA. Sure enough, he gets bit, but fishing light as he was, he and his team of friends (who were all taking turns on his rod) got worked. He got bit around 9:30 pm. At close to midnight when I gave up trying to fish, the fish wasn’t even close to being landed. I was in my bunk when the boat started up around 12:15 am. In the morning, I asked Capt. Rick if he managed to land it. Nope.

Why is this a DBTG thing you might ask?

Because of him going all around the boat, tangling everyone as he went, pretty much prevented anyone else from fishing. Please listen to the crew and don’t be that guy!

We got in early Tuesday morning from the Ocean Odyssey trip. I briefly went home to clean up and switch out from tuna gear to seabass gear. Next up was driving to Oxnard where I got onboard the Cobra out of Channel Islands Sportfishing on Thursday morning (July 1st). You might recall me mentioning Capt. Chris Hanson from my Fishing For A Cause article a few weeks back. Aside from being a nautical captain, Chris is also a fire captain for the LA County Fire Department and was one of the key figures involved in the LAFD vs. LACFD benefit fish-off I participated in.

Chris invited me to come up and fish his boat, The Cobra. With the white seabass on the chew up north, I was happy to take him up on his offer. Because Chris still has his full-time gig with the fire department, Capt. John Sudac is the primary operator of the boat. Long story short, the fish have migrated from Anacapa, out to Santa Cruz Island. Despite being further out, there were a ton of boats out there. Similar to my last Graylight trip, it was run-and-gun sonar school fishing. Find the school, drop-in, one or two guys get bit, hopefully, they land their fish, then it’s on to the next school.

Tough week for me because again I couldn’t get bit. There were a couple of times where I had that tap tap, and I waited for the bite to materialize, but it never came. Towards the end of the day, I’m up on the bow and feel that tap tap again. C’mon fish, please bite. Capt. John was yelling at me from the wheelhouse, “Come on Joe, get bit.” Believe me…I’m trying. My rod loads up, and I’m afraid to say anything because of how the day was going. But it does and I’m bent pretty good. The right kind. At the same time, the guy to my right gets bit, as does the guy to my left.

Here’s where the 2nd DBTG moment of the week kicks in.

The guy to the left already has a fish. In fact, I helped him get it because his drag wasn’t set properly. I helped him out. He reeled it in. He got a fish. Since he had one in the cooler, he decides to hand this one off to his buddy. So he’s looking to his left, yelling for his buddy to come up and fight this fish. Meanwhile, all three of our lines converge and I can see impending disaster about to happen. The guy to the left is fishing straight spectra to his topshot, while me and the other guy have mono (I fish a longish mono topshot for the stretch). I’m screaming for deckhand Keith Ballard to come up and try to unweave the lines before the inevitable is about to happen. Keith didn’t make it in time. The guy on the left isn’t doing anything to avoid the tangle. We got sawed off. His buddy gets to reel in his fish unencumbered. Had the guy been paying attention and trying to avoid the tangle, would the same outcome still have happened? Perhaps. However, with him not paying any attention, was that sad conclusion inevitable? I say yes. Capt. John agreed with me. As they say, sh*t happens. Too bad it was at the expense of not just me, but the other guy on my right too. Oh well. I want to say the boat ended up with 10 seabass for 11 anglers, plus a bonus halibut, some calico bass, a bunch of bonito, and a sheephead. A good day for sure. Just not for me and the other sawed-off guy.

Luckily, I had one more opportunity to redeem my week. While still on the Cobra, I get a text from Capt. Shawn Steward of the Graylight. We had just watched him get the last 6 fish he needed to finish out with boat limits on Thursday. “Call me when you can.” I had signal at the time and called. “We were on these fish this morning in the dark by ourselves. I want to try and avoid this mess and get out early. Get to the boat by 2:45.”

Friday morning, we’re at the dock at 2:30. We board the boat and we’re out. Shawn powers out to the same spot and other than one commercial boat and one skiff, we’re out there by ourselves. First stop of the day, all 6 rods of our group are bent. Shawn and his deckhand Angel are furiously trying to untangle and manage to save 5 of the 6 fish, including one that was hand-lined after the line got cut to undo the tangle.

Guess whose fish got lost…yep it was me. “Not this again” I’m thinking to myself. It’s early though. Way early. It’s still dark, so we had plenty of time and the freedom to chase the schools as needed. Unfortunately, we didn’t continue getting those big hits and getting our limits early. We plunked it out like it went the day before. Luckily for me, I wasn’t having the same issues and I already had 2 fish in the cooler by the time the rest of the fleet made it out to the spot.

It wasn’t quite as bad on Friday as it was on Thursday. For some reason there were less private boaters, but it was still pretty crazy.

Being with Shawn on the Graylight, while he communicated with his other boat, the Aloha Spirit was definitely an advantage. Having a buddy boat that was just as skilled was extremely helpful in staying one step ahead of the rest of the fleet. Despite that advantage though, we’d get on top of the fish and they just didn’t want to go.

All that boat pressure will do that to fish.

I saw it on the Ocean Odyssey trip and was experiencing it again. We kept at it though and managed to eventually get our 3 fish limits for everyone that came out.

Thanks to all the captains and crewmembers I fished with last week. I was well taken care of on every boat/trip. They all found fish. Whether or not those fish wanted to go was ultimately what determined the outcome of each trip. If you have a bad trip, just keep fishing. Sooner or later it will be your turn. Good luck if you get out there. 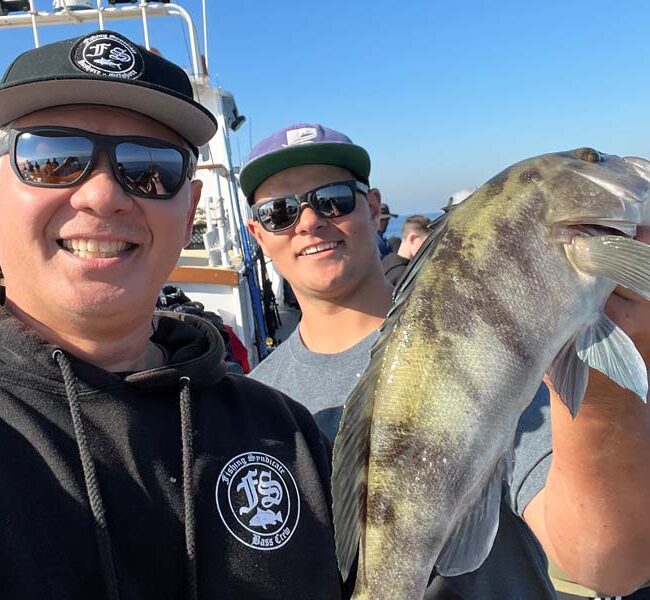 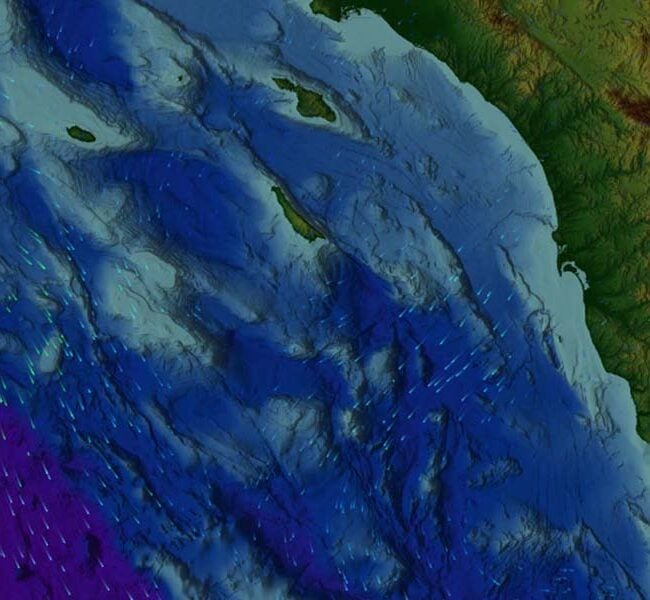