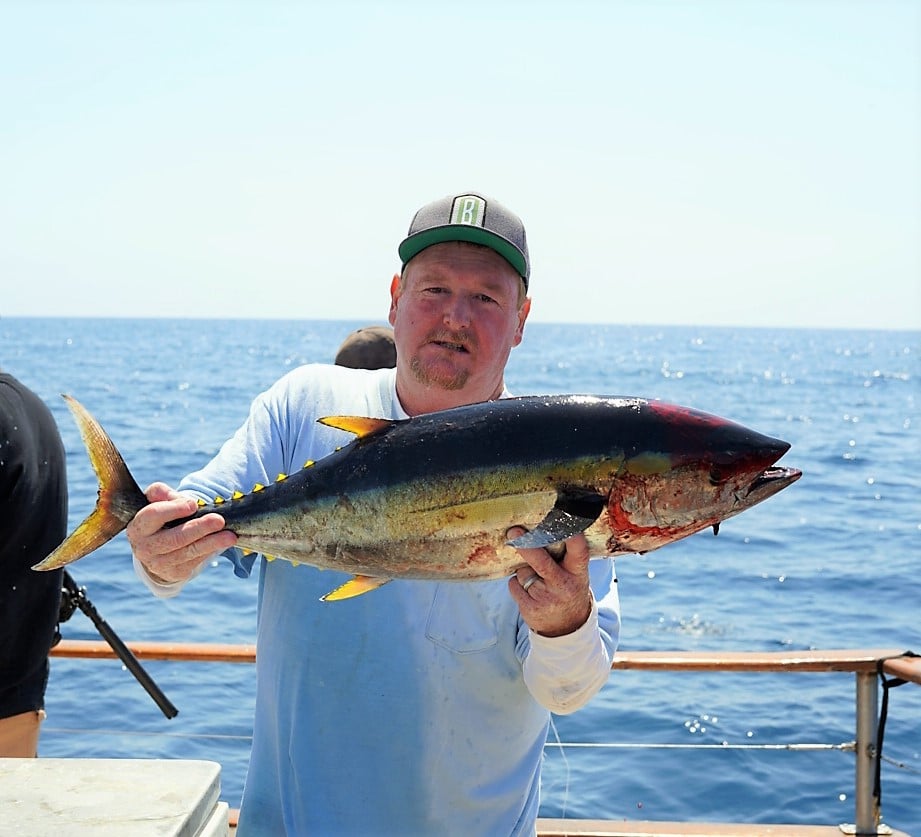 It wasn’t always this way. There was a time that I had confidence throwing 40# flyline, I’d get bit and land tuna. Then somewhere along the way it got complicated. First it was light line, 20# (or even 15#) was what it took to get bit. I struggled with the choice (still do) of going down in line class to get bit vs. sticking with a line class that gave you a better shot at landing fish.

Then poppers were the hot item. I bought my share. The struggle there was finding a reel to throw for distance vs. getting bit on one with enough line capacity to get the job done. I remember being out at the 43 once on the Commander. I launched a Yo-Zuri flying fish popper what seemed like 50-yards or more (with the wind at my back). It was far enough that I couldn’t see it when it landed. Pop-pop. My buddy Tony Caira was yelling at me from the elevated deck outside the galley, “You’re bit! You’re bit! Wind!” I had cast it out on a 9-foot Turner’s Californian rod with a Lexa 400. I dumped about 2/3 of the spool on the cast. Luckily, the fish came toward the boat. Furiously I reeled until the line came tight. The fish was charging at and under the boat. I had to find my way around the stern, so as to not get busted off on the hull. Walk and wind. Walk and wind. I managed to get through all the anglers who were flylining a bait on the drift side and the fish stopped to take a rest as I was next to the house on the opposite side. Deckhand Anthony Cannuli (now at Sav On Tackle) was by my side and asked me if I wanted to splice my line onto one of the boat’s trolling rods. I was still catching my breath and I think the fish was catching his as well. Before I could answer, the fish caught its second wind and went on a long run. I watched my line zip off the baitcaster at an alarmingly high rate of speed. In a desperate attempt to slow it down, I buttoned down the drag and pop! Off came the fish with about 3/4 of my spool gone with it. I have to say it was a thrill getting worked like that, but after that experience, I’m having a hard time even remembering if I used a popper again.

After poppers, the heavy flatfall became the lure to have in order to land big bluefin tuna. I was at the 2019 Fred Hall Long Beach and bought a Makaira 30 and paired it with a custom-made Seeker 2×4 to outfit myself to catch a big one. That year I ran into a string of bad luck with my trips…wind cancellations, shoulda been here yesterday trips, etc. I never really had a legit shot to connect on that gear.

2020 was pretty much a lost cause because I was gone most of the year. I had a shot on the Thunderbird but ended up catching more big yellowfin than I’ve ever caught before. Then again on the T-bird where my struggle continued while I watched Lori Heath and Rob Tressler get it done on their DIY Cow setup (above).

I straightened out a hook for the first time on one using my sinker rig. And I had a knife jig inhaled so deeply that the fish’s teeth found their way past the heavy 200# leader and sawed me off on my 100# main line. Good times. Still, I persist…

Friday morning (July 9th) I boarded the Sea Watch out of Seaforth Landing for a full day trip. The San Diego is booked out into September, so the Sea Watch is now online 7 days a week to provide some additional supply for the demand to go out and catch bluefin. The regular captain is Kris Karpow. Kris contacts me often to update me on what he’s seeing out there and share some pictures from their trips. Kris met me at the boat but then left after helping get passengers signed in. His relief captain, Ryan Myers, would be running the trip today.

After picking up bait, we headed southwest. In a couple of hours, we were in the zone. Over the course of the morning, we stopped on bird schools, sonar schools, drifted kelps, etc. NADA. Finally, around lunchtime, we stopped on a sonar school that reacted positively to the bait we chummed. A guy fishing the sinker rig (using 50#) finally got picked up. He had a Penn Torque reel matched up with a vintage rod that looked to be all glass based on the bend. Plenty of line capacity and drag on the reel, but not enough recoil power on the rod to deal with the fish efficiently. We all thought it was going to be a 100-pound+ fish based on the length of the fight, but it ended up being maybe 50-ish when it was all said and done. Oh well…one bite, one fish to get the day going.

Instead of kicking off an afternoon bite though, it was merely a glimpse of what our day might have been.

We worked our way southeast. I spent most of the time with Ryan in the wheelhouse. Along the way, we had some very promising stops. There were times where the whole screen was filled with tuna. A couple of times, Ryan commented it was the biggest school he had seen this year, but they just didn’t want to play. At one point, we ran into a school that stayed and splashed around just off the port bow. I placed a colt sniper right into a foamer, but no takers.

We were winding down toward the end of our day. Bait was running low and we needed to make something happen. We ran into a school that Ryan recognized as yellowfin, not bluefin. We were all excited that maybe our luck was about to change. Ryan instructed crewmember Riley on the bait tank to dump bait on them big. I was on the stern and saw them react. Across the whole back of the boat, extending beyond the rails on both sides fish boiled on the bait. Despite all those boiling fish…one bite for a guy fishing a bait using a 3/4-ounce rubber core sinker.

We had one more promising stop before the end of the day, but the same results (or lack thereof). Tough day on the water, but it is what it is. The bright spots are that there is a lot of fish around. Also, the water is warming up and yellowfin are arriving on the scene. Hopefully, it’s a sign of better fishing ahead.

I’m going to take a little break. I’m headed to Montana this week to hang with friends and family and try my hand at some trout fishing. This last week, bluefin were caught up the coast off Dana and Long Beach and even spotted as far north as the Channel Islands. I’ll be back at it when I return. 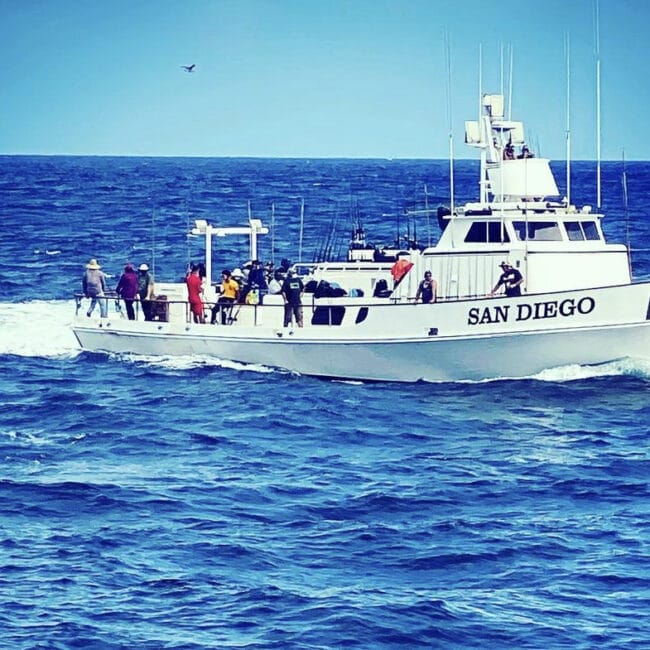 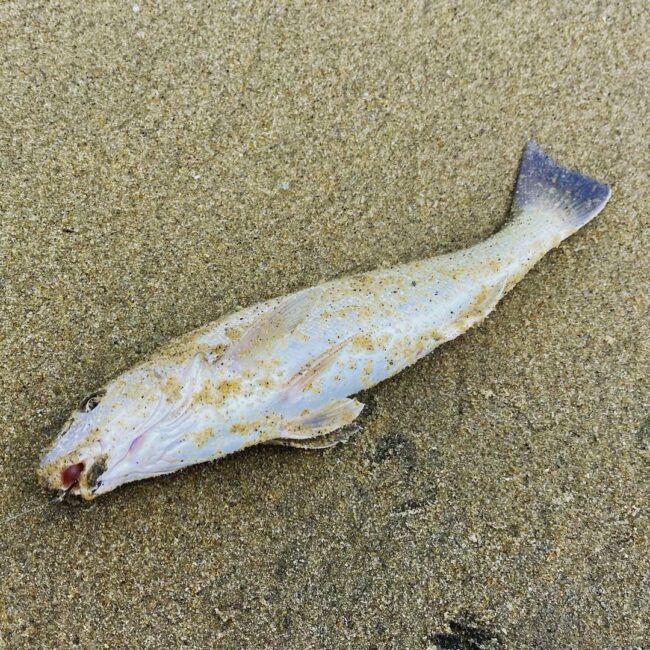