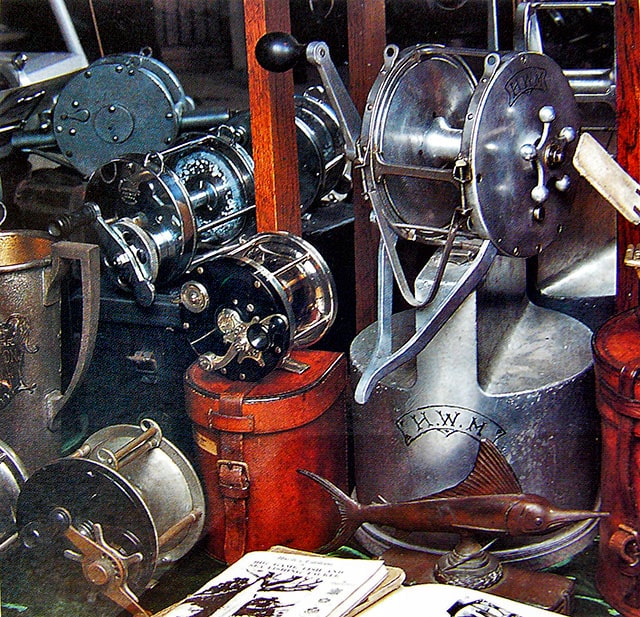 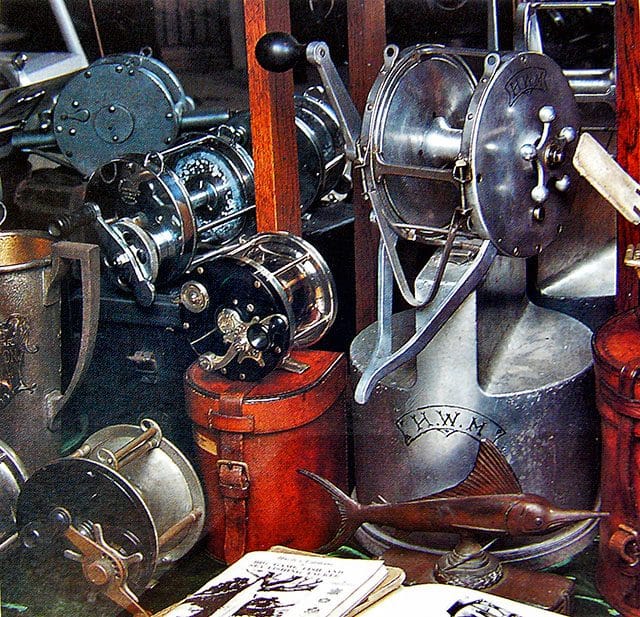 10. In the early 1900’s reels began to evolve into a variety of star-drag systems. Notice the elaborate cases some of them came in.In 1972, San Diego businessman Michael Farrior attended a small “flea market” at the Rancho Bernardo Winery. On a table strewn with silverware and dusty china – dishes from another era – the afternoon sun glinted on an old fishing reel. Not realizing it was a life-changing event that would lead him on a remarkable journey, he purchased it for a few dollars.

After some research, he discovered that the small aluminum star-drag reel was a “Castey” named after builder Dalmo Castey from Santa Monica. While not a rare reel, it did get his curiosity up as he loved fishing tackle and had a penchant for collecting already having worked for a successful native and Ivory-artifact collector across Alaska.

His passion for salt water fishing fueled his desire for collecting saltwater tackle from the American Civil War to the mid 1930s.

He knew the value of having knowledge of artifacts first-hand from his Alaskan mentor. However, as there was no internet in those days, his method was to discover the information by researching old catalogues, books, magazines, tackle brochures and interviewing living legends of the sport.

Research enabled him to understand which manufacturers advanced technology and which made the highest quality tackle. Learning why certain items were more important than others led to his being highly sought after as a reliable source for information. The collection is internationally recognized as one of the finest examples of the evolution of modern tackle.

Early on, he recognized the importance of focusing on acquiring the rarest items in the best condition possible and to avoid the temptation to gather all that comes along. Mike told me that, “My best advice to collectors is to first determine what segment and time period of our sport you would like to collect and stay focused.”

Mike has enjoyed sharing his knowledge through writing, museums, public displays and power point presentations over the years, and many collectors claim he helped encourage them to get started in this wonderful hobby; some have even turned it into a business. He is asked so many questions and amazingly, he answers every one! 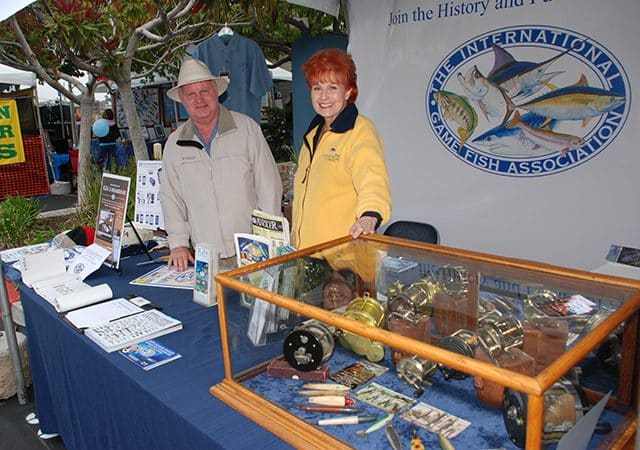 People are always surprised to discover that all of the immaculate tackle he displays is not for sale, just the opposite – he is always interested in learning more, purchasing items and answering questions. If he does not know the answer he will research it and get back to you. Who does that at a show? 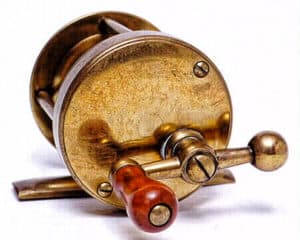 on display and he replied, “They were all 1867 patented reels made individually by Frederick, Julius and Edward Vom Hofe in New York City for casting to striped bass
from the beaches and rocks. Later, when the railroad came south into Florida, these makers (he points to about 15 more reels) innovated these new ideas which enabled anglers to catch the larger tarpon. That was followed by California anglers pioneering the segment of the sport known as “Big Game Fishing.” California is where the first tuna, marlin and broadbill swordfish were caught on rod and reel.”

He showed me a display of “knuckle-buster” reels that typify what the early anglers used when they fished for tuna. The name referred to how the direct-drive reel’s handle would spin backwards when a large fish struck the bait, sometimes skinning knuckles or in some cases literally breaking an angler’s fingers before they could collect themselves. His research established that the birth of big-game fishing occurred on the Pacific Coast and the early fishing gear used to battle large bluefin tuna, marlin and swordfish evolved here. The sportfishing ethics and rules used today by the International Game Fish Association were largely adopted from the writings of our founders of the Tuna Club of Santa Catalina Island at the turn of the century.

“Making Californians aware that big-game fishing originated here is one of my proudest achievements,” Farrior said. “Even here in California it had failed to be acknowledged, and the incredible story was simply lost to time.”

Many “makers” combined their skills as craftsmen with their experience as anglers. Examples of Bates, Conroy, Leonard, Meek, Milam, Hardy, Mitchell-Henry, Kovalovsky, Stead, Lee, Klein, Hoesel, Atlantic, Garey, Fin Nor, Coxe, Stevens, Frederick, Julius and Edward Vom Hofe and several others are represented in Farrior’s collection. Beyond the reels, early metal and wood lures, lines, books and all types of Memorabilia, tackle owned by Zane Grey, Ernest Hemingway, W. C. Boschen, Kip Farrington, George Farnsworth and others are all included.

In addition to rods and reels, it contains early metal and wood lures, linen line, books and bills of record fish including Zane Grey’s 1041-pound marlin from Tahiti. As past President of the Tuna Club of Santa Catalina Island and their Historian for nearly 30 years, Farrior penned the award winning “History of the Tuna Club 1898 – 1998,” a highly collectible but privately printed book. He thanks his departed friend Paxson Offield for believing in the project; Mike describes Offield as “The finest sportsman, conservationist and gentleman angler I have ever known.”

world’s angling community perceives West Coast sport fishing. Michael is the International Game Fish Association’s first official Historian, where he also serves as a Trustee and Executive Board Member. He has been credited by the IGFA with being the first to collect and record all the relevant documentation to verify that California anglers took the first tuna, marlin and broadbill swordfish on rod and reel in the world and established the rules for tournament fishing way back in 1898!

Michael has received numerous awards, including being inducted into the California Outdoor Hall of Fame. His support for young anglers includes an annual tournament in his honor at the San Diego Marlin Club. The collection he has assembled and the research he shares is Michael’s way of giving back to the sport he loves.

This year Michael is offering something very unique at the “Day at the Docks” on April 9th. Along with a limited display of his collection he is offering free information and appraisals to anyone wanting to know more about their own treasures.

Mike is always looking for additions to his own collection that might help better illustrate the sport’s colorful history. As a collector for 45 years, he always encourages others to share in the wonderful hobby, a fascinating and rewarding pastime for the whole family. 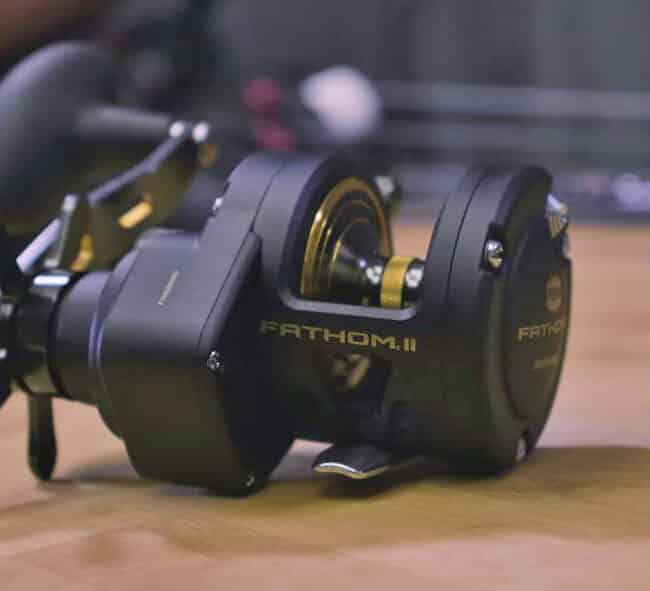 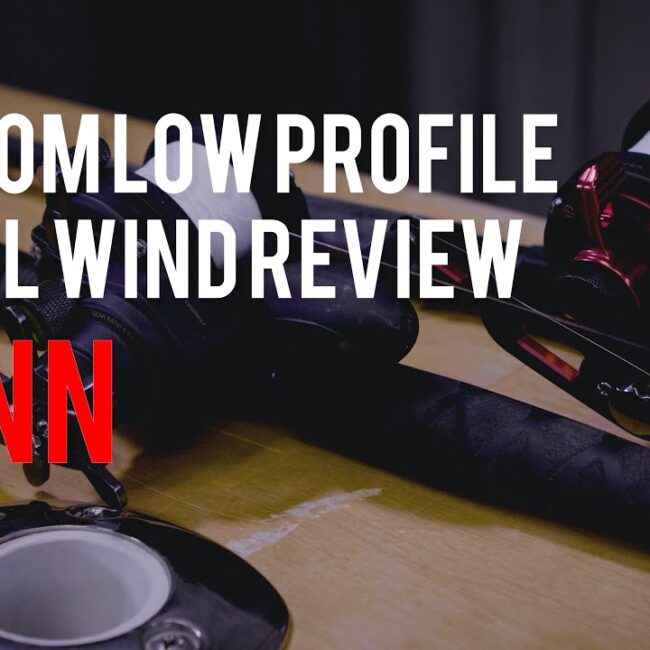