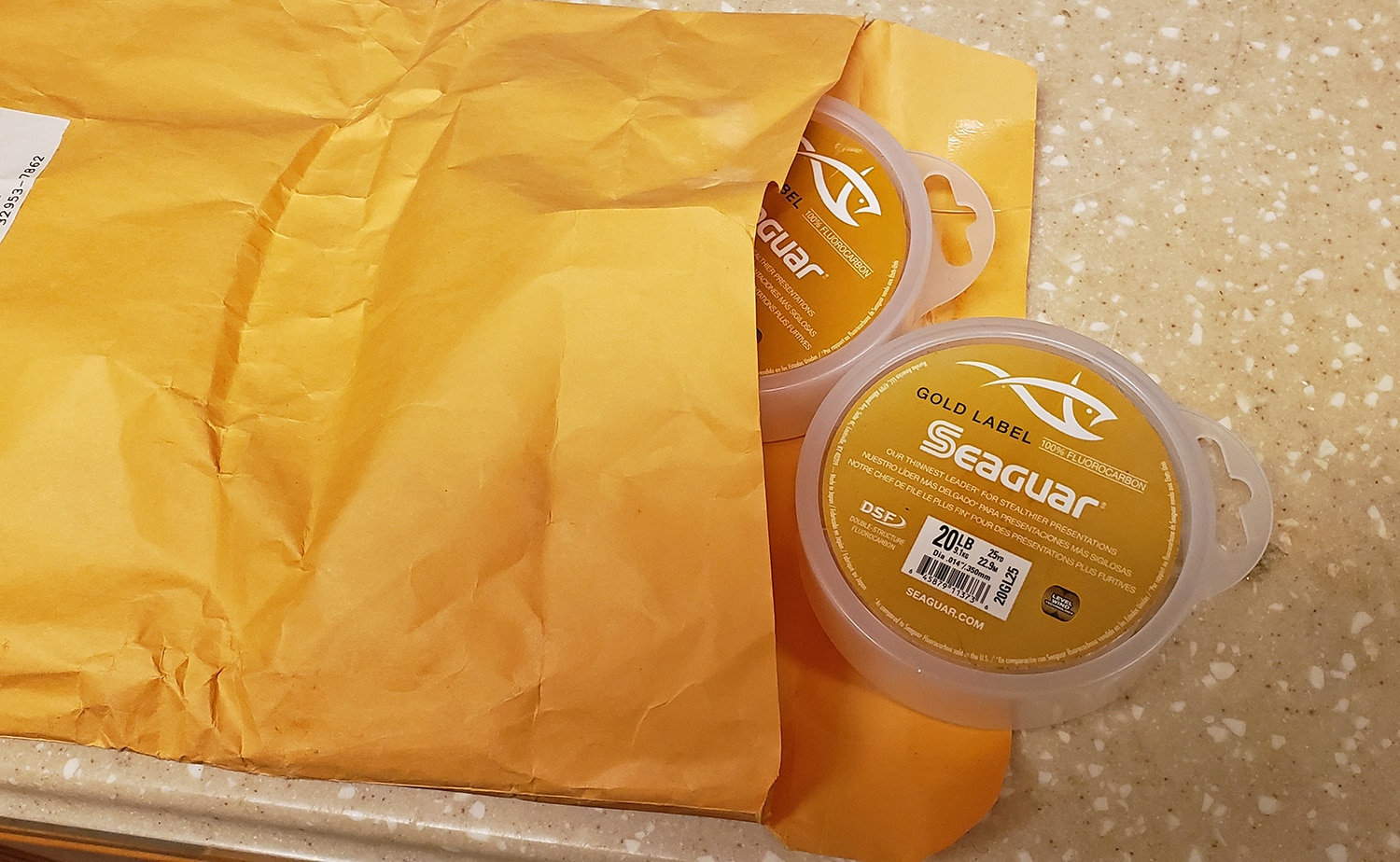 One of my favorite parts of being an outdoor writer is the opportunity to try out new product samples, often before they hit the market for the general public.  Some are just fair; some are pretty good and occasionally we call them “game-changers”.

I believe that this is going to be the final description of Seaguar’s Gold Label fluorocarbon leader.

Originally, I received a few samples of the new product in Seaguar’s long line of premium fishing products.  Many don’t know that Seaguar originated fluorocarbon leader resins and continues to create and manage their own formulations giving them the ability to tailor certain parameters making them better suited for a specific fishery or condition.

This is where the magic of Seaguar Gold Label comes in.  Seaguar has blended two of their custom fluorocarbon resins using their proprietary co-extrusion technique.  The resulting Gold Label material consists of a strong, but sensitive fluro-core fused to a soft, supple fluro-exterior.  The resulting leader is 18% thinner by breaking strength than any of the other Seaguar leader materials.  This is a huge benefit in two directions because you can either use a thinner leader of the same test to get more bites or bump up your breaking strength without having to go to larger and more visible leaders.  Presently, the Gold Label is available in tests ranging from 15# to 40#.

This brings me to the recent experiences that left me feeling a little guilty after the fact. 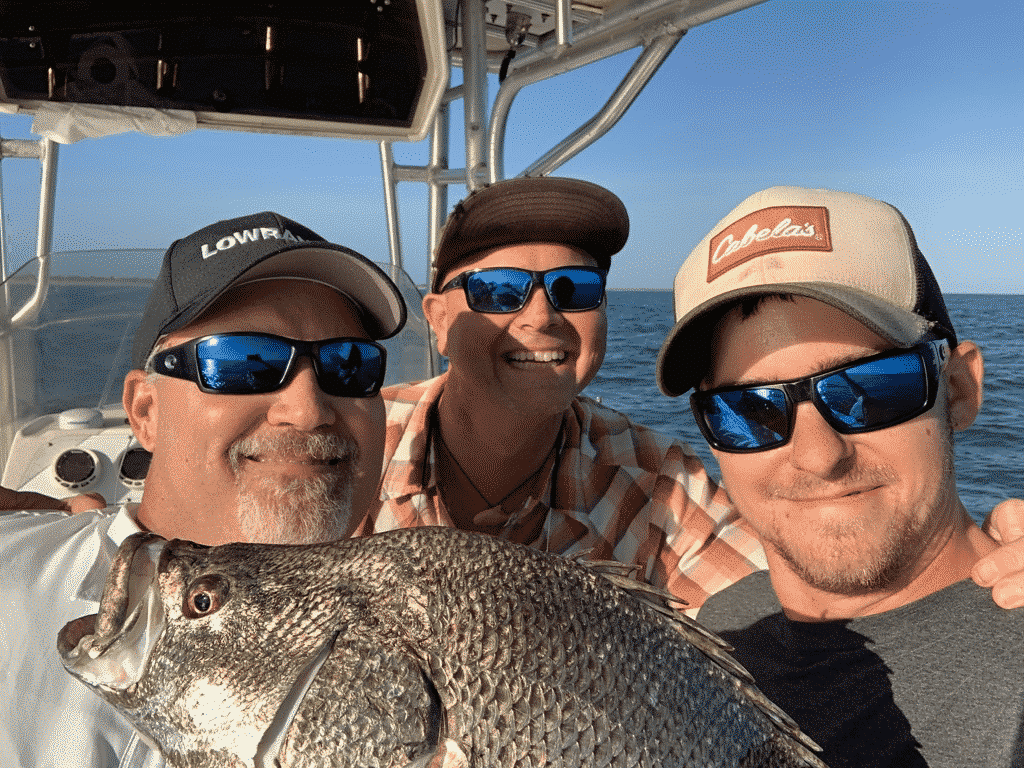 I joined my good friend Derek Redwine, BD’s Creative Director, and his cousin Andrew Redwine for a quick trip along our coast to chase tripletail.  I grabbed my river spinning outfit because it carries over well for inshore coastal fishing.

We were pitching live shrimp on light jigheads to nearshore floating buoys associated with a dredge operation that was taking place just off the beach.  Tripletail love to hang around any structure and floating debris and this makes all buoys a magnet for anglers too.  The moral of that fact is that these fish see a lot of tackle thrown their way and this tends to eliminate the dumb and hungry fish leaving the skeptical and keen-eyed ones.  As many structure-loving fish do, tripletail make us walk the line between using tackle light enough to get the bite, yet heavy enough to persuade them out of their cover.  Buoy chains are not very forgiving and some loss is inevitable, but any advantage you can gain with modern tackle can make a difference.  We already use fluorocarbon leaders as standard practice to help trick wary fish, and on this day, I already had a fluorocarbon leader tied on because I use it exclusively for inshore redfish, snook, tarpon, and seatrout. 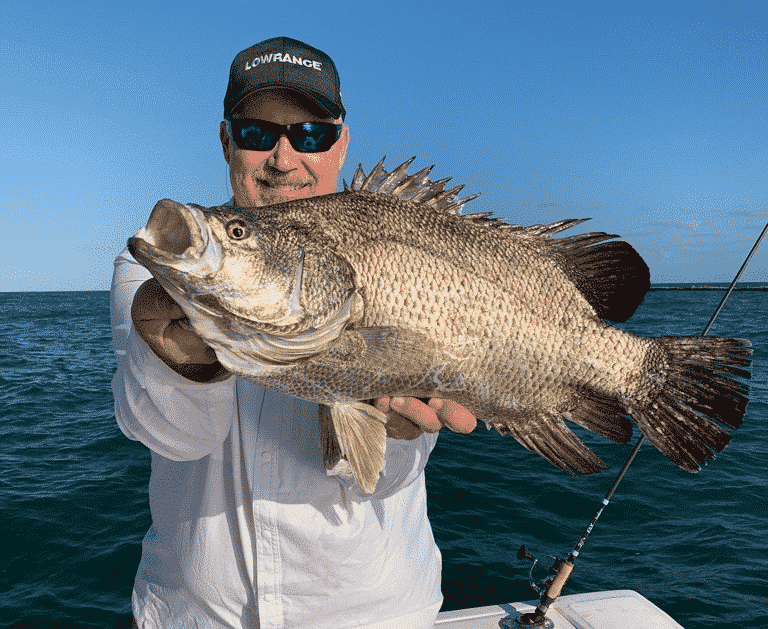 Derek was driving the boat and maintaining our position despite a swell and a chop which made sneaking up and staying put a chore.  Andrew and I coordinated our casts alongside the buoys, letting our baits sink downward with a slight tether alongside the chain.  Sometimes you feel the telltale thump of a bite, but so often the line just stops sinking the same rate as it had been.  That’s a bite and you flip your bail and come tight.  I had more than several of these in a row while Andrew had maybe one.  I don’t remember the exact count, but it was enough that he was eventually getting grief from Derek who was patiently watching and driving.  It actually did become a thing that I was getting more bites and fish than Andrew, though I purely chalked it up to luck because Andrew is a very accomplished angler. 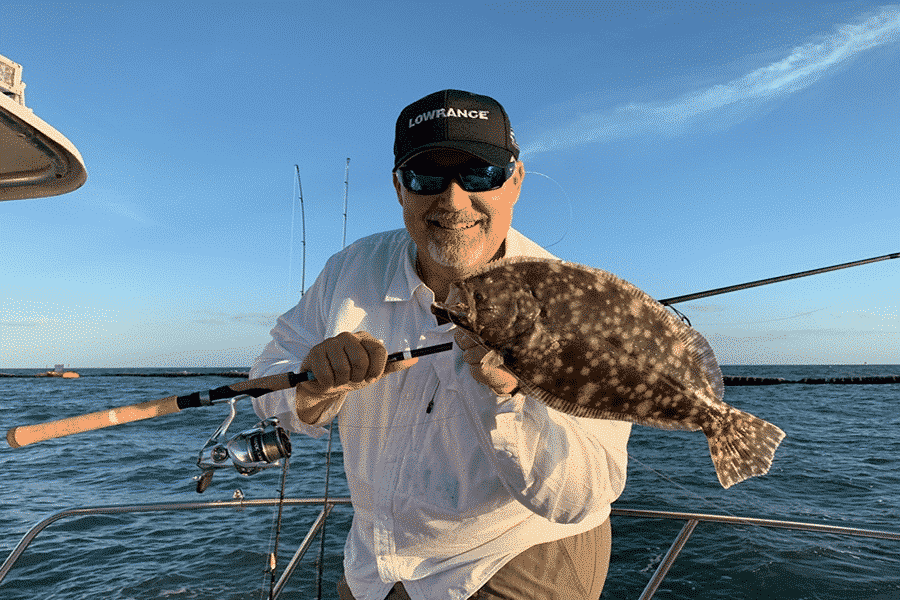 It was only on the ride home during some good-natured ribbing that I realized I had been using a sample spool of Seaguar Gold Label in the river during my last trip and that was what I had been using for the tripletail. Hmmm.  I felt a little guilty and never mentioned it to them, so they will read this now and say: Hey, that’s not fair! 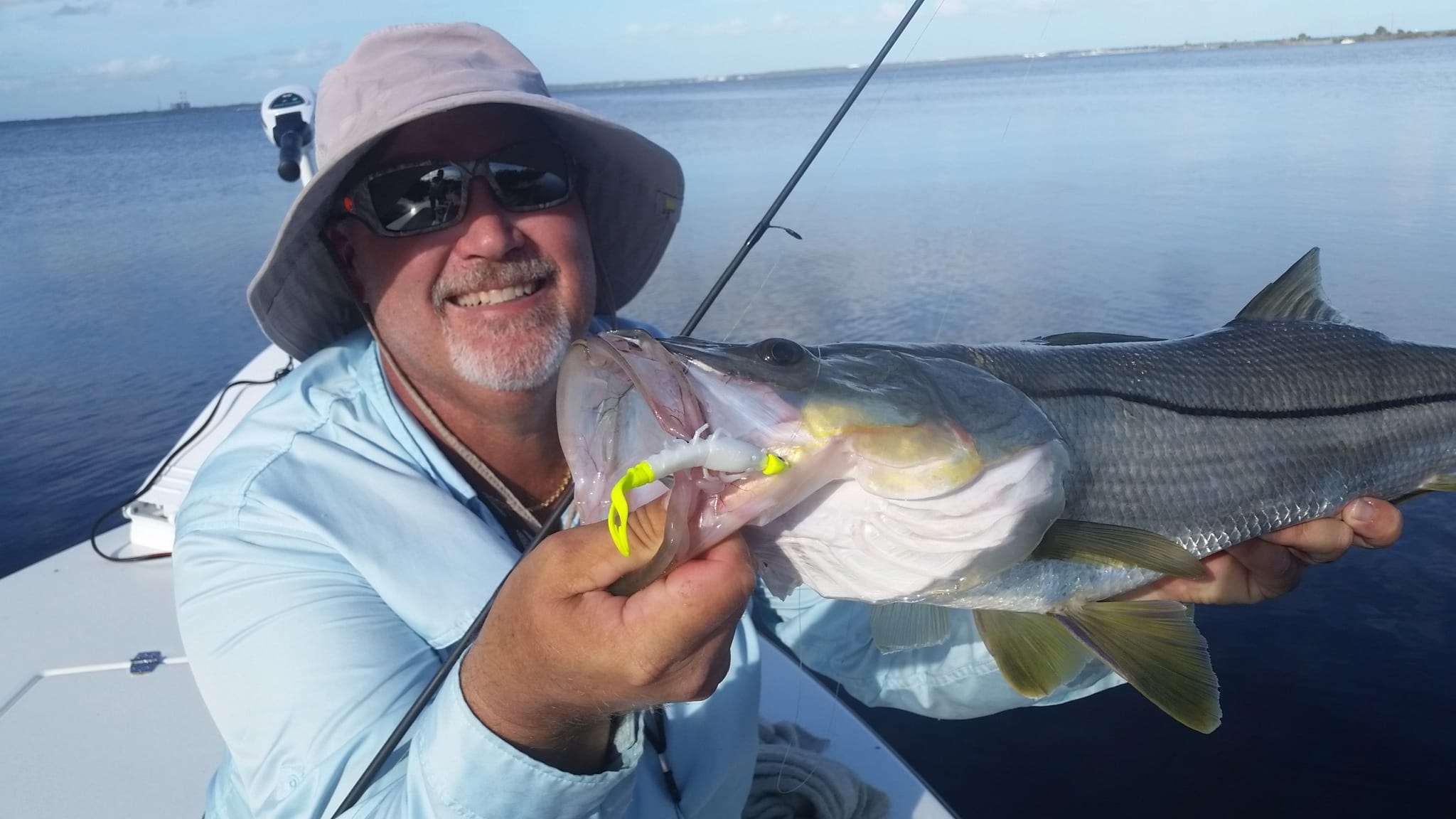 My next trip was with my neighbor, Scott Jones, in the Indian River.  I retied a fresh 2-foot piece of Seaguar Gold Label 25# leader to my braided line.  We fish together often and our normal pattern is to throw a Berkley Gulp Mantis Shrimp on a Mustad Spring Lock jighead.  The jighead has a spring on the back of the head that screws into the Gulp body making it stay in place for the duration.  It makes a dramatic difference in how long the soft bodies last. 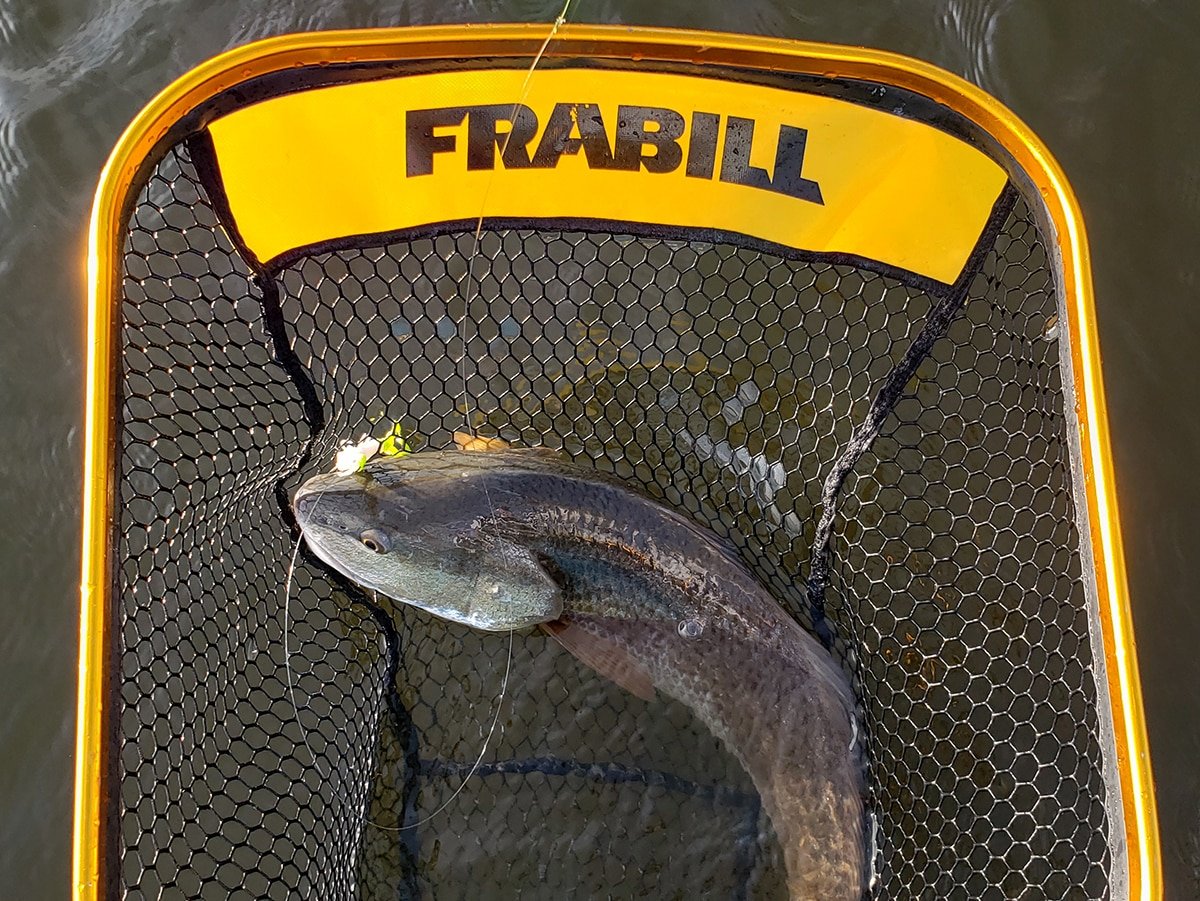 We cast these along shorelines and docks looking for the aforementioned grouping of popular inshore species.  Again, the ability to use a heavier leader without having to go up in diameter and visibility is a huge benefit to the Gold Label.

Of course, It was without ill intentions, that I didn’t think to offer Scott some of my precious sample of Gold Label until after I was up about five or six reds on him.  Once I remembered the fact that this new leader might be the difference, guilt gave way to sharing and we got him rigged up too.  Maybe two casts later, Scott’s lure got blasted and when he set up on the fish it left a huge eruption of water and silt as it realized it had been tricked.  Unfortunately, we pulled the hook on that one before we got a visual, but we both went: Hmmmm. 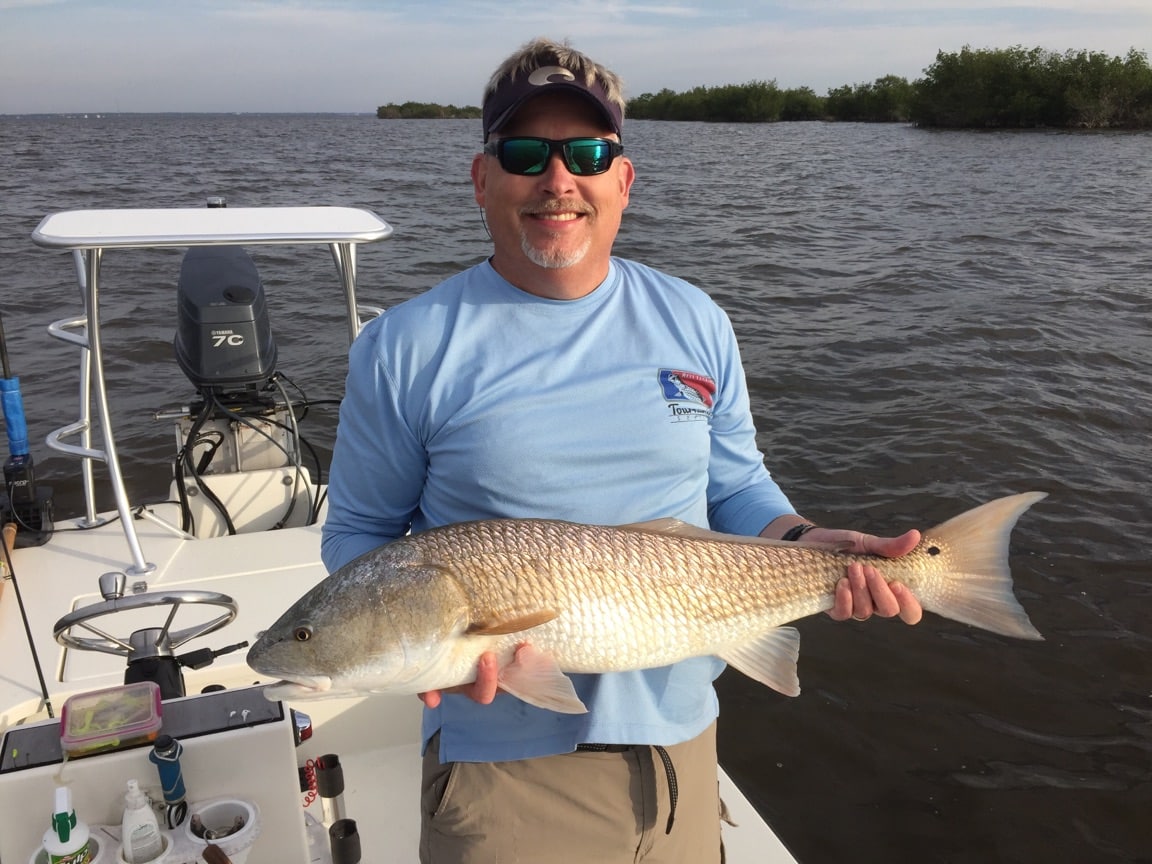 Then two docks later, Scott proceeded to put on a clinic, catching about seven reds in a row.  These were not giants, but they were happy to pounce his jig.  Hmmmm.

I’m not going to say that I can prove the fact that the Gold Label made the difference, but now there is certainly enough mounting evidence to make me say HMMMMM and tie on another piece. 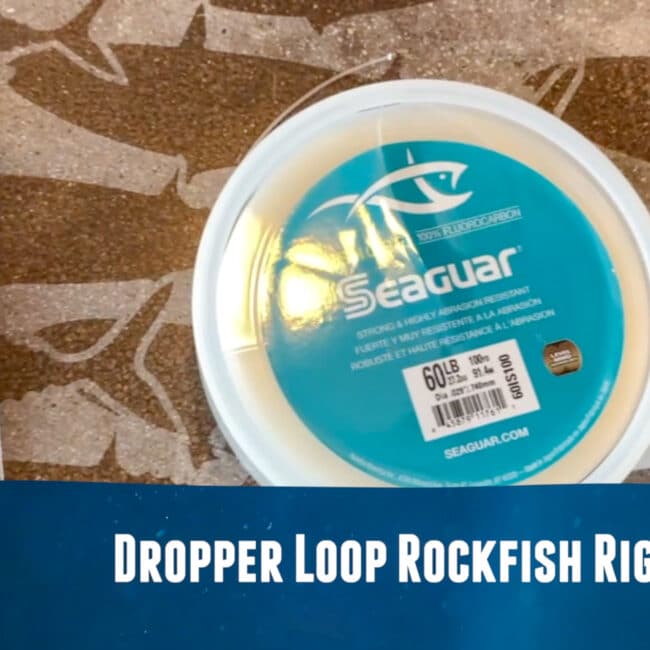 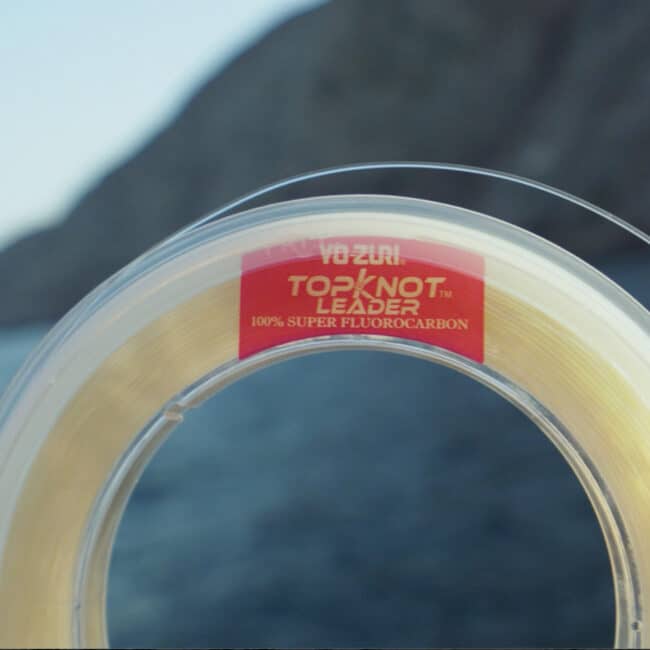 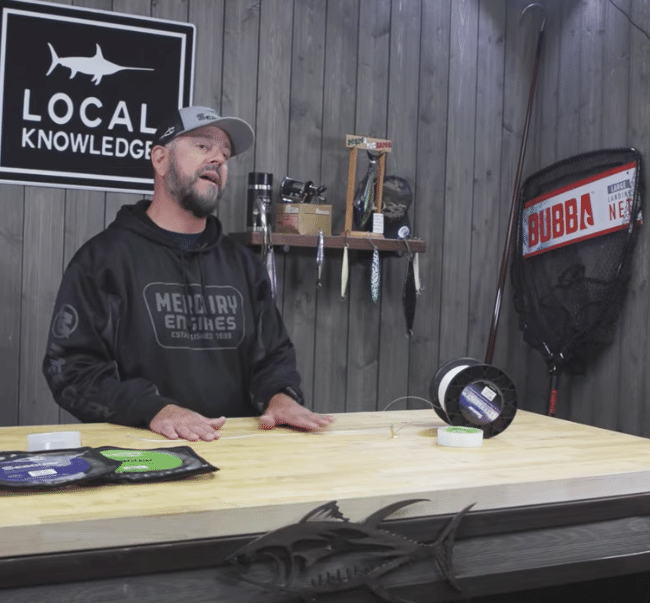