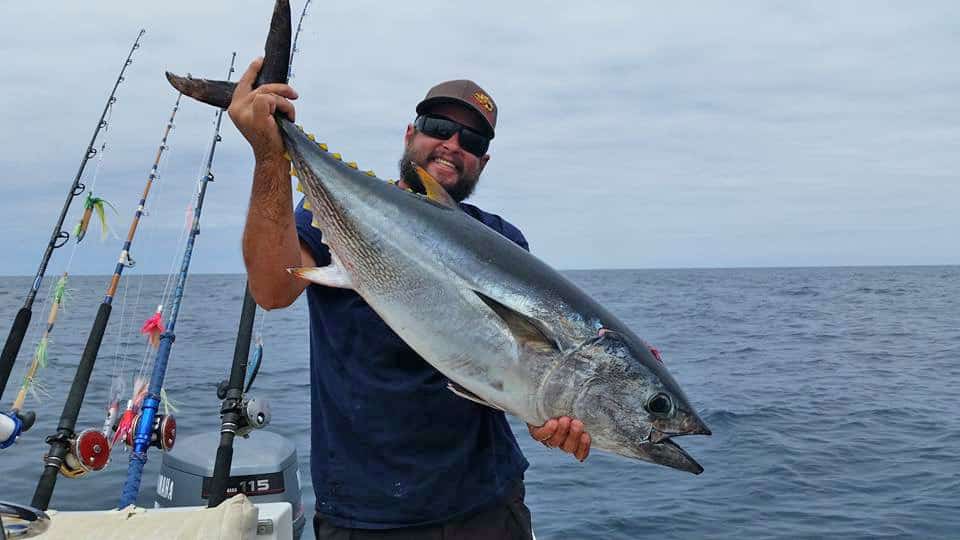 Things have been changing so quickly over the last month that reporting what happened over the weekend is pretty much old news by Friday morning. That being said, there are some long term patterns in play this year, so even old news can give you an idea of which direction to look if you’ve been paying attention to what the fish have been doing over the course of the summer. While I certainly don’t have room to fully extrapolate on my theory regarding these patterns here, I will share some observations when applicable. The bluefin started biting in earnest on Sunday for boats fishing the outer ridge near San Clemente Island. After a few days of decent action, the wind blew and the fishing got a little tougher for boats working out that way. Wednesday was tough according to most reports. However, a friend of mine fished yesterday in an area where there had been bluefin seen but not caught several weeks ago and he had limits of 50-60-pound fish.

We’ve got a new moon on Friday night, so in theory the bluefin should be biting this weekend. Now the question is where to go to have the best shot at catching them. Well, there are plenty of big tuna along the beach below Dana and there are some on the outer banks as well. The problem is that that’s where all of the boats are fishing. So my suggestion (and what I’ll be doing) is to look at what the water is looking like in the areas they’ve been biting and then make some guesses as to where they might also be biting based on previous catches this year. I know; that’s a lot more work than driving to where they bit yesterday, but it’s much more rewarding. Forgetting about bluefin for a while, there are plenty of the bigger grade yellowfin to be caught as well as some dorado and yellowtail. I spoke with Brandon Hayward of One Man Charters and he reported that during one of this week’s trips his passengers caught several yellowfin to 60-plus pounds in the morning and then finished the trip on the beach catching 30-pound yellowtail. Captain Jimmy Decker also reported good offshore fishing out of Dana Point this week. His groups caught lots of yellowfin, with a few 50-60-pound bluefin tuna in the mix. There’s also lots of tuna up around Catalina Island. I fished offshore on Saturday and caught four yellowfin just a few miles outside the rigs. That same day, my friends John and Travis Curry fished below the island and had limits of yellowfin in an hour and a half. I went back out Sunday afternoon and saw tuna, but couldn’t get them to bite. My wife Rachel caught the only fish of the trip; a small dorado.

There are several yellowtail bites happening along the coast right now. Starting in San Diego, there are yellows biting at the Coronado Islands and sporadically biting along the beach. There’s another area biting between Dana Point and Oceanside and of course the bite off Long Beach is still going full speed.

I went out for a couple hours this morning to check out the scene outside of Long Beach. Saw a few fishy areas but ran out of time before anything came together. My friends Chris Lilis and Denek Marshall fished that same zone yesterday and had eight yellows on the surface iron. With the amount of boats I saw out there this morning, I’d be willing to bet that the area is going to be a complete circus by the weekend, so if you want yellows I’d look elsewhere.
There are several elsewhere’s that are worth a look and the first is Catalina Island. The island has been getting less pressure lately because everyone’s offshore or on the beach, but all of the normal yellowtail zones are producing. If you’re unfamiliar with where those zones are you can check www.fishdope.com for details. Anacapa and Santa Cruz Islands are another option for yellowtail right now. Earlier this week I spoke with Captain Nick Tharp of El Tiburon Charters www.eltiburon.fish and he reported good yellowtail fishing at the islands on Monday. His passengers had four on the yo-yo and one on the surface iron. According to Tharp there are lots of big yellowtail around right now, you just need to find the right school of fish on the right day and it’s game on.