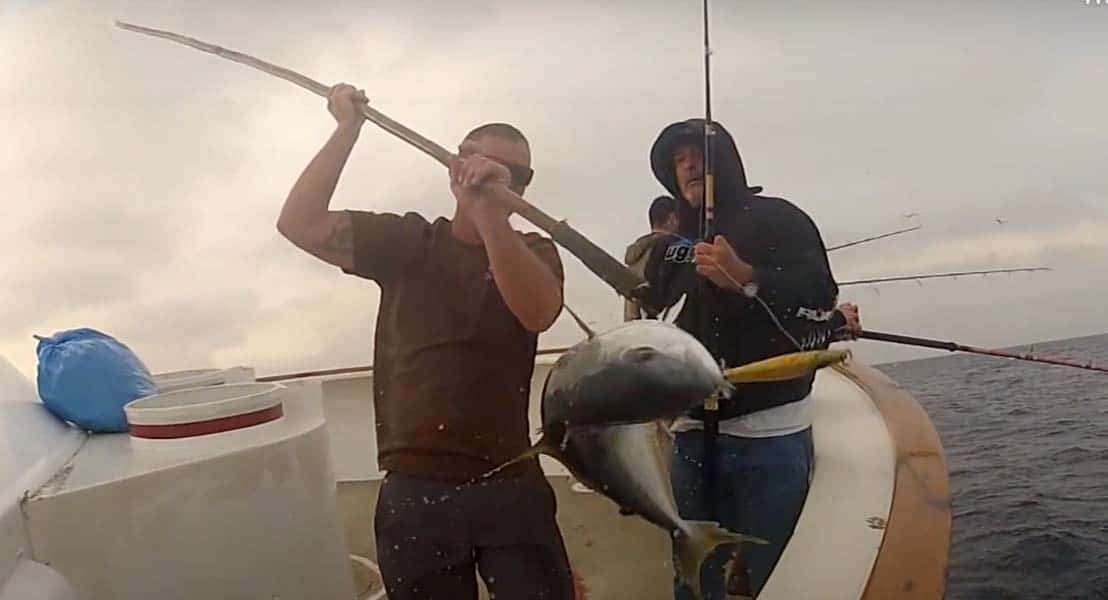 Prior to the last El Nino we experienced here in Southern California, sportboat fishing trips down the northern Baja coast to Punta Colonet were billed as “Freezer Filler” trips.  The draw for those trips was the opportunity to rockfish in Mexican waters during the annual January/ February closure in California waters.  There was always a chance of running into some yellowtail on those trips, but yellowtail wasn’t the focus.

When El Nino happened, the character of these trips changed. Winter yellowtail became an expecation, and rockfishing took a backseat. I did my first Punta Colonet charter (and trip) in 2015 on the Eclipse (now the Tomahawk).  We caught our share of yellows AND the rockfishing was exceptional.

In 2016 I embarked on a particularly memorable trip on the Eclipse with Capt. Adam Williams (now of the New Lo An).  I’m pretty sure we limited out (5 fish per person) on yellowtail for the boat.  I caught 6 on the jig (including my still personal best 40-lb. yellowtail) before I quit fishing to film this video…

It was still biting when I turned the GoPro off even though we had drifted off the high spot.  Many of us, myself included, switched to fishing live bait on a dropper loop hoping for lingcod.  Instead, I ended up catching 2 more yellowtail as a result. My buddy Nick Lam continued to yo-yo and ended up putting a total of 15 on deck that day!  The run of good winter yellowtail fishing seemed to peter out after 2018.  My 2019 Colonet charter on the Pacific Queen yielded just one yellow for the boat.

I hate to say it, but we have cycled back into more typical winter yellowtail fishing.

A lot of luck is involved in catching yellowtail during the winter months.  There are the simple facts of fewer boats being out (due to annual maintenance), compounded by weather curtailing the activity of the boats that are fishing.  When you do happen to get out, and do happen to encounter yellowtail, they just seem less active.  There may only be a short window of opportunity when they are willing to bite.  Those opportunities are usually driven by the tidal movement and tend to close quickly.  More reason to savor those moments when things do come together and make the most of those opportunities.

The first couple of weeks of the New Year was prime time to target yellows at Colonet. I was supposed to go the first week of the year, but my trip was abruptly cancelled. Along with my boat’s cancellation, something about the permitting process (on the Mexican side) kept a lot of boats from going. That being said, a couple boats did get down and had some success on yellowtail. The scores weren’t huge, but the opportunity was there.  The Relentless out of H&M Landing got the first solid score. They returned from a 1.5 day trip on January 16 with 14 yellows (below).

A couple days later, the Tribute, out of Seaforth Landing, returned on January 18th from a 2.5-day trip where they got 60 yellowtail and enjoyed good rockfishing.  That was the high point of this season so far in 2022. Recent trips have been lucky to get any at all.

Despite missing the window on Colonet, I still had the itch to get down that way. Luckily, I had the opportunity to head down to San Quintin (just a little further south) with my buddy Dennis Leung to fish for a couple days with Capt. Bertoldo “Gordo” Garcia of Garcia’s Pangas Sportfishing.  Over the two days, we had two small morning windows of opportunity. Day 1, we were on top of a shallow reef and started a drift in about 150 feet of water, but it rose up to only 60.  I had two opportunities using the Fishing Syndicate FSC 800H (30-60)/Trinidad 20A combo and the full-size mint/white 6x heavy. Both hookups resulted in losing the fish on the reef. A lot of times when you successfully boat one of these fish, their face will show the scars of trying to rub you off on the rocks.  They’re smart, strong fish.  At the end of our window, we were still marking fish, but they were no longer responding to the jig.  I tried a live mackerel on the high dropper.  Great outcome, but not the target fish.

The next day I made a couple of adjustments.  I bumped up my leader to 50# fluoro (from 40). I also buttoned down my drag. I figured pulling the hook would be preferable to getting busted off again.  Luckily, Day 2 played out in a similar way and we had our shot.  Dennis kicked it off and got one fishing the full-size JRI in blue/white.  Then I was able to get one in the boat.  Then Gordo got one, and just like that, it was over.  Short window, but we were lucky to be on it when it was open.

The opportunity to catch yellows is out there.  There isn’t anywhere though in our region right now where it’s a sure thing. If you are willing to try, come prepared and get lucky, the effort might just payoff.  When it’s not wide open, it makes for memorable stories when it comes together.  It also makes you more appreciative of those times when the bite is hot.  Good luck if you get out there.