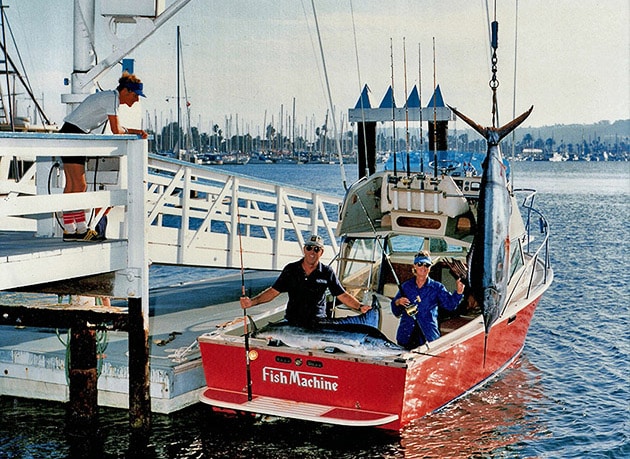 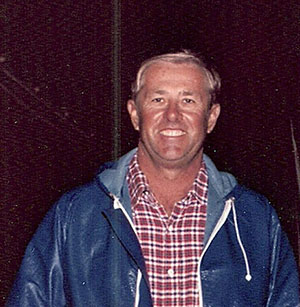 He built a family business delivering a remarkable, well-designed boat equipped to meet the expectations of a rapidly growing group of hardcore Southern California anglers who were seeking a trailer boat designed to their personal, exacting specifications.

Born Feb. 18, 1929, in National City, Don was a fourth generation Californian. His mother, Leona, was born in Chula Vista in 1910 and her grandparents had moved to the San Diego area from Denver after purchasing a citrus orchard in Otay.

Don’s father, Jack, moved from West Virginia to National City at the age of three along with his parents, Arthur and Cora Blackman and grandparents, John and Ada Blackman who were to oversee a large parcel of property the family had acquired in Lower Baja California. (Don frequently boasted that his great-grandfather was one of the first to drive a car from San Diego to La Paz!)

The family, including sisters Jackie, Lillian and Phyllis, relocated to the Point Loma area when Don’s father purchased a lot on Quimby Street where he built their home.

It didn’t take long for Don to discover the abundant surrounding sea life and Sunset Cliffs became his personal playground. He often recalled his childhood exploits, which included prying abalone off the rocks and catching lobster at low tide. Living on the water shaped his interest in sportfishing and the outdoors that continued throughout his life.

In 1940, Shirley’s family moved west from Kansas City and settled on Quimby Street, next door to the Blackman family. Don and Shirley first met as 10 year olds – the classic boy and girl next door. In the early days, Shirley dismissed Don as an ornery brat and Don claimed he didn’t even know Shirley existed!

They first dated in their freshman year at Point Loma High. Shirley was a cheerleader, witnessed all of the baseball games, football games and even some of the basketball games that Don played during his high school athletic career. 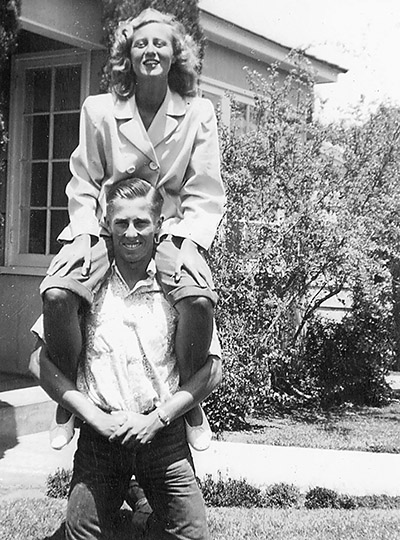 On the day of Don’s high school graduation, he was drafted by the Brooklyn Dodgers organization; he and his high school teammate Don Larsen flew to New York together that summer to report to their respective teams. Don played three seasons before returning to his home, family and the ocean that he loved.

Shirley and Don married on May 12, 1950, spending their weekend honeymoon in Los Angeles watching a PCL baseball game. Their marriage spanned more than half a century.

Back in Point Loma, Don and his dad worked full time at a lumberyard, Blackman’s goal was to start a sportfishing charter business with his father and sent away for plans to build a 30-foot boat. Shirley’s parents generously offered their backyard for the construction of what would be Don and Shirley’s first boat. 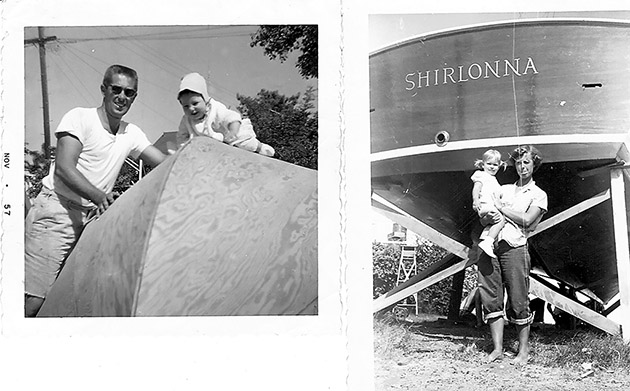 When completed, the first charter boat was named “Shirlonna” – after Shirley and Donna, their daughter.

After a year of the sportfishing charter business, the boat was sold. He then went to work at Kettenburg Marine and then became a foreman at Driscoll Boat Yard while taking correspondence courses to acquire his boat-building skills.

Don and Shirley were “boatless” for a number of years. They bought their home in Bay Park; son Steven was born and their interests turned to hunting.

Don became interested in breeding and training Labrador Retrievers both for hunting as well as for competitive field trials – Belle (Blackies Belle) and Brant (Black Brant of Whiskey Creek) – became members of the family in the late-1960s. 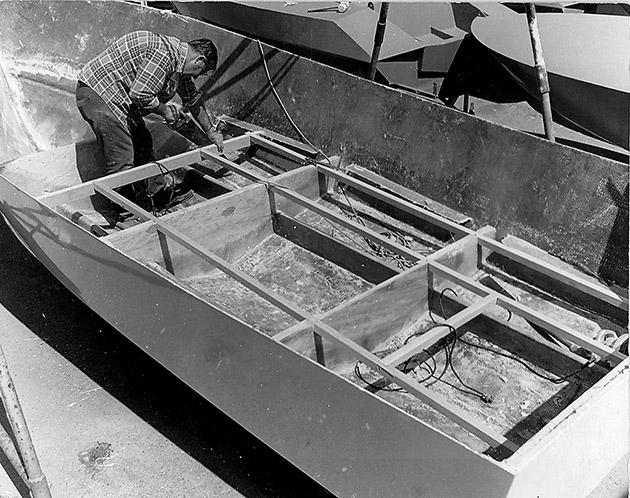 By 1967, their boat building company was underway. First they constructed plywood lobster skiffs after work in their garage and eventually moved to Kettner Boulevard before relocating to a larger facility on Market Street in 1981 as they outgrew the Kettner facility.

It was the mid-’70s when they built the first Fish Machine, a distinctive bright orange 20-foot fiberglass skiff. 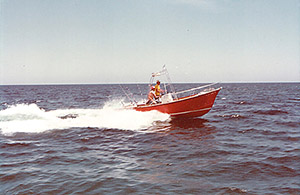 I met the Blackmans in the mid-’70s. I was fishing the La Jolla kelps in my 19-foot Bayliner and spotted an orange center console 20-foot skiff with a small tower. I wanted to add a tower to my boat. I slid up beside the fishing couple, complemented them on their cool tower and inquired where it had been built. Their answer? A fellow named Don Blackman in a shop called Blackman Boats on Kettner Boulevard. I later discovered that Don was a shy, unassuming man and never one to boast.

When I walked into the shop the following week, there stood the couple I had seen fishing off La Jolla. Puzzled, I asked if Don Blackman was there. Grinning sheepishly Don introduced himself and his wife, Shirley. This was the beginning of a friendship that lasted more than a quarter of a century until his death in 2004. 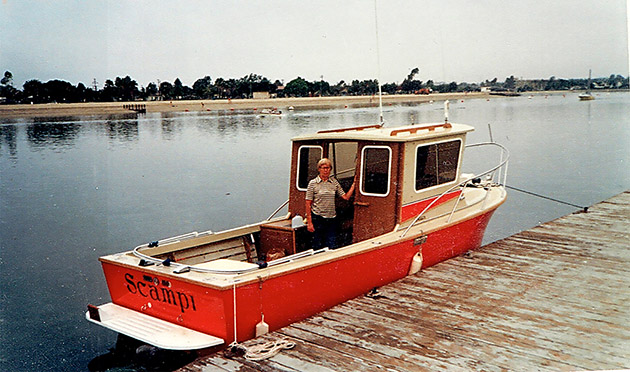 Soon after that meeting, Don introduced his 23-foot Fish Machine in several different layouts –one of the most stable, dependable sport fishers ever built. It was roomy, comfortable and trailerable with a variety of power options and features.

The first 23-footer was ordered by Seth Brown and I ordered the second, a center console model with an over-the-console tower. 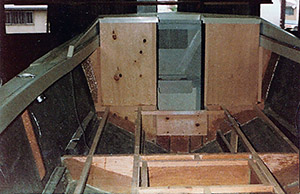 This was the first and only time that I ever purchased a custom boat, built to order.

Frequently I visited the boat yard from the time it left the mold until it was finished and in the water. It was a new design for Don and I had a few suggestions that I thought would work better for us, especially in Baja. Little things like the placement of rod holders and storage to name a few. 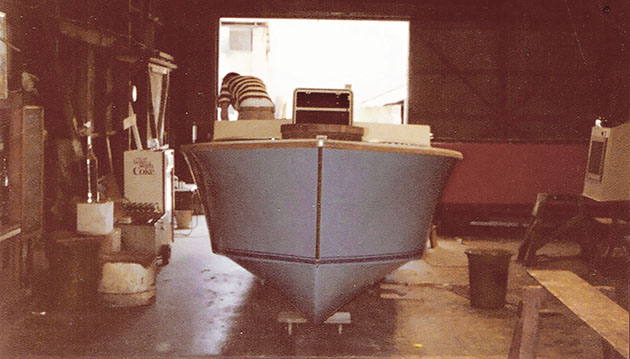 When I suggested that mine should have an autopilot, Don was aghast! Why in the world would I want that expensive piece of equipment on such a small boat? From my point of view, I intended to fish alone occasionally and having one on board was like an extra pair of hands.

The second season, I concluded that the small seat over the console, which he had used on his boat, wouldn’t work for me, so I commissioned Blackman Boats to build me a full tower. Don and I had many lengthy discussions over my request for a full set of controls in the tower before he finally conceded.

After running the boat in following seas, I told Don I thought my boat would perform better with trim-tabs. I learned very quickly that suggesting anything that even hinted that the hull’s performance could be improved with tabs was tantamount to suggesting that there was something slightly amiss with his first-born child; but with more give and take, I finally had my trim tabs.

In my defense, my modifications became standard options on all the boats he built after that. Over this time frame, we managed to build an even stronger friendship 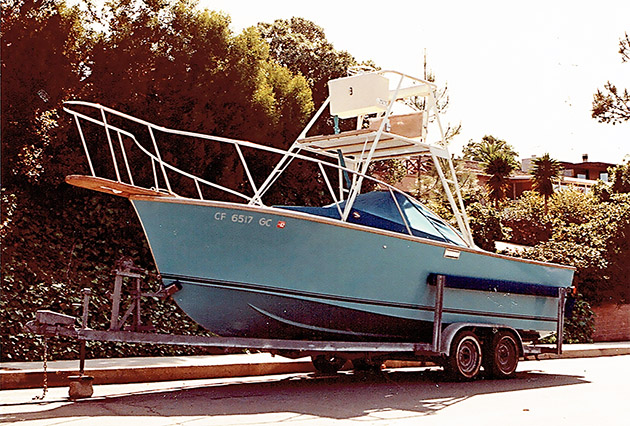 Early in the summer of 1977, I took delivery of my blue skiff, the “Water Closet,” named in honor of “Services Unlimited,” a janitorial service I started in 1964.

Don had joined the Marlin Club of San Diego in 1974, qualifying as an active member with a marlin he had caught earlier. He quickly made many friends in the fishing community. His VHF radio blaring in the background at his shop made it a must-drop-by place during the week to keep up with fishing dope, and it wasn’t unusual to run into friends who had popped in to enjoy the warm, friendly atmosphere of this family-run business. 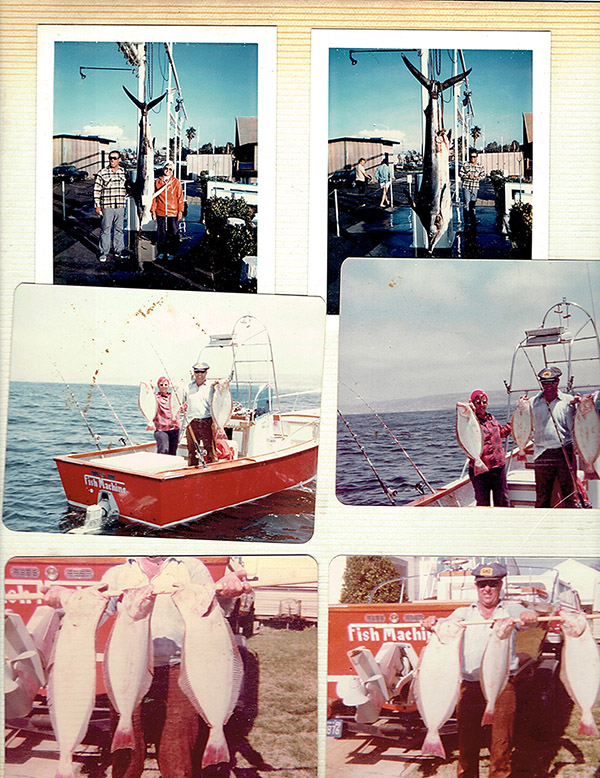 And almost every weekend, you could find Don and Shirley on the water fishing for whatever was biting … for almost everything that was biting! Throughout the summer, the orders that came in for Blackman’s “Fish Machine” models kept him and his growing crew hopping. As the fleet grew, other interested buyers, anxious to purchase their own custom boats built and equipped to their personal specifications, flocked to Blackman’s.

As summer waned that year, albacore were replaced by striped marlin. Yvonne and I spent many days that season attempting to put our first marlin on the “Water Closet.” After many near misses, in early November, the two of us were fishing alone when we finally hooked one, and ironically Don and Shirley were nearby. 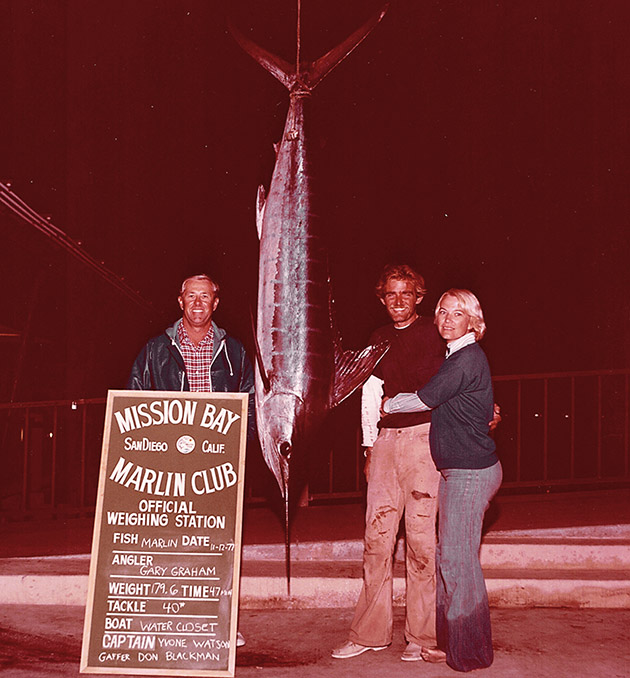 Seeing that it was just the two of us, Don called on the VHF. “You need a hand?” his voice boomed over the speaker. Soon he was alongside and on our boat. Not only had he built the “Water Closet,” he was awarded an assist for gaffing my first Southern California striped marlin!

In the following two days we landed two more marlin for the boat. It did indeed live up to its name – Fish Machine!

Two Blackman boats, Don and Shirley’s and Chet Thompson‘s, (Manager of Stanley Andrews Sporting Goods) had been towed down the Baja Peninsula to East Cape, returning with many stories of their adventures. In San Bartolo, north of Los Barriles, Blackman had needed someone to climb onto the stainless tower and lift the wire and incandescent light bulb hanging from it — the only streetlight over Mex 1 — so the boat’s tower could clear. While the offshore fishing was terrific, the two groups had the most fun fishing for roosterfish that behaved like little marlin along the shore.

As the Southern California season came to a close, we prepared the Water Closet to make our first trip to the tip of Baja, trailering our boat all the way to Cabo San Lucas for the first time. 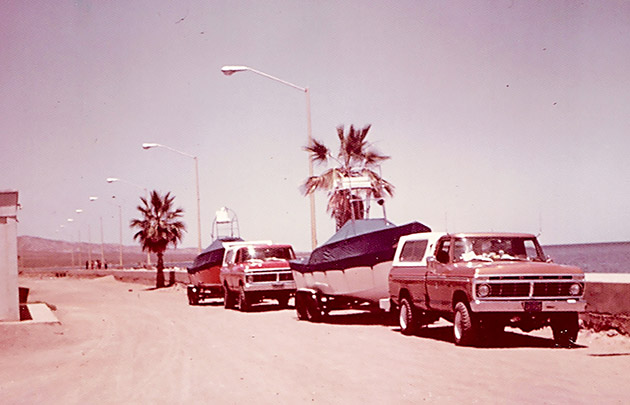 We excitedly began our journey down Mex 1, caravanning with the 20-foot Fish Machine “Peace,” owned by Frank Wood, a Coronado real estate broker. Along with my longtime friend David Lewis, owner of Avalon’s Hermosa Hotel, who rode shotgun, and with my son, Greg, our trip went smoothly.

My father, friends, Walt and Pat Gutjahr and even Don and Shirley were among the many other fishing friends from San Diego who joined us to fish throughout the spring before we towed the boat home.

Again in 1978, Don Blackman played a part in yet another milestone for “Water Closet.” 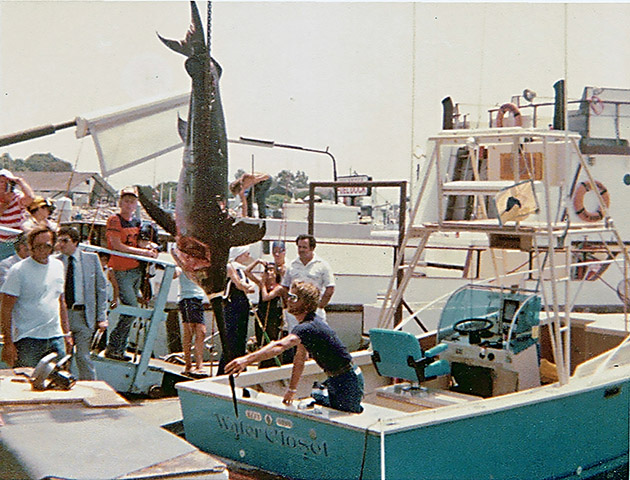 My first swordfish, weighing 230-pounds on 50-pound test line, took 13 hours. With the center console controls, I was able to handle the boat and fight the fish alone. Gene Grimes coached me via VHF. I hooked the swordfish at noon, five miles out in front of the Mission Bay roller coaster, and around 10 p.m. Blackman and Chet Thompson came out and found me about 20 miles offshore. Though the fish was still hot, we managed to gaff it. It sent water spraying over the tower for forty-five minutes before it was subdued but at 1:00 a.m. we brought it in. It was the first swordfish on a Blackman … gaffed by Blackman! 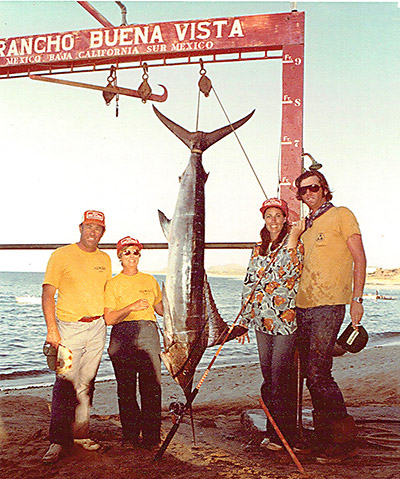 From the mid-1970s when Blackman’s first prototype was launched until the end of the decade, the Fish Machine quickly became the trailer boat of choice for an impressive list of seasoned anglers too long to list here – many of whom I have had the honor to call friends over the years. I assure you that if you ask, they will each have similar stories of exciting adventures and memorable catches that they will eagerly share in animated detail. 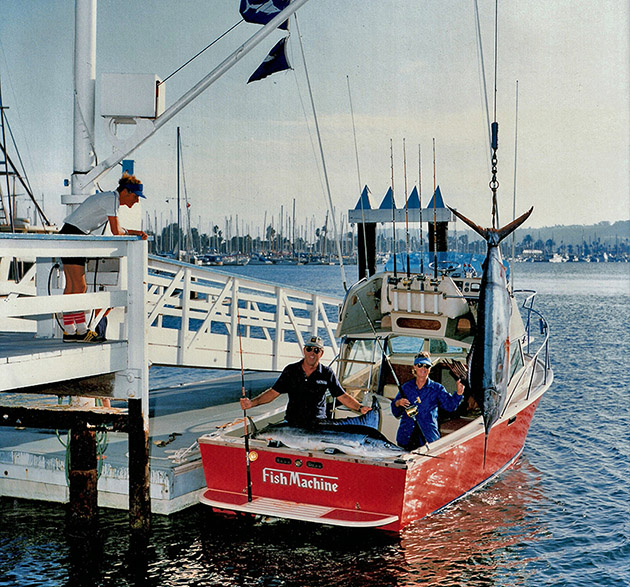 Using a baseball metaphor, Blackman swung for the fences with his Fish Machine boat. As he rounded third and headed home in the early-80’s, he was already planning his next turn at bat in the upcoming decade. His next design would take him into the big leagues!

And that is where I will pick up the story in Part 2.