Editor’s Note: Here’s a great story from Bruce Kuhn about his cabezon record that still holds today. Bruce worked two years for the Santa Monica Harbor Patrol prior to moving to the Los Angeles County Harbor Patrol… He graduated from the Los Angeles County Sheriff’s Academy in 1964.  He has been involved with fishing and the science of fishing for many decades.  Here is one of his many stories and one for the record books!

It was the spring of 1958 and I was just a few weeks from graduating from Loyola High School in Los Angeles. It was finals and I was tired of hitting the books so I decided to take a day off and relax fishing.

The morning I arrived at the pier they advised me that the Indiana wouldn’t fish that morning and they sent me on the half-day boat Kiora with Captain Jerry. 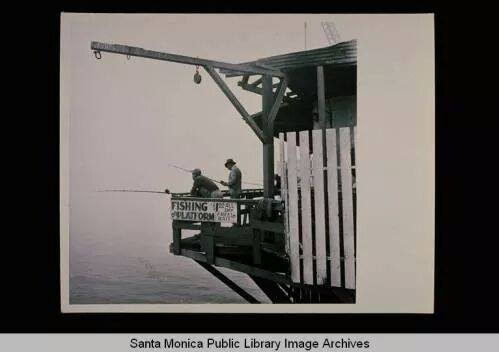 The morning run was uneventful. On the afternoon run we headed for Santa Monica Canyon located right in front of the Los Angeles International Airport runway.

After a few hours fishing Capt. Jerry gave the “Wind ‘em up, we are heading home.” Just then my rod bends double… my drag was locked down as we were bottom fishing and you really don’t let those bottom fish run… and I was jigging a Chrome Spoofer. 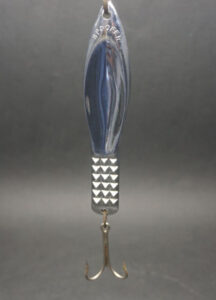 Holy Smoke! I really have something “Big” on…

Of course all on board gather around and say “It’s a shark, no bottom fish fights like that.” Captain Jerry was getting anxious to get back to the pier and kept saying, “Just reel the shark in and we’ll go home.”

Probably 20-30 minutes later someone yells “COLOR!.” The first cry is, “It’s a big lingcod!” Captain Jerry says, “Look at the fish, it’s a cabezon.” The deck hand says, “Capt. have you ever seen a cabezon that big?” “It must be a big ling. “

Capt. Jerry tells the deckhand to net it. “Don’t use a gaff, I want to keep it alive.” Once aboard they placed the fish in the bait tank and Capt. Jerry called the pier and told Versal Schuler, owner of Santa Monica Sportfishing, to call the California Department of Fish and Game and let them know we are coming in with the largest cabezon he had ever seen.

The game warden showed up at the pier and drove the fish directly to The California Department of Fish & Game Marine Resources Laboratory on Terminal Island. In 1958 some of the state’s most respected ichthyologists and marine biologists worked at the Marine Resources Laboratory. Included were John Fitch, Hal Clemens, Leo Pinkus, Anita Dougherty, and more. One or more of these biologists examined the fish and found the weight to be 23-pounds 4-ounces, the largest cabezon ever recorded on rod & reel at that time.

Whenever I asked the guys at the pier, “What have you heard about my fish?” they would say, CDF &G said it was a big cabezon. They never said it was a record.

Now move forward 35 years in time to 1993. I was fishing yellowtail on a panga off Loreto’s Coronado Island with Phil Friedman, founder of 976-TUNA. He says to me. “Have you ever caught a big cabezon?” I said, “Yes back In the day when I was in High School 1958.” He then tells me that he saw my name in the CDF&G Saltwater Records for a monster cabezon. Remember, this is now 35 years later. I knew I caught a big cabezon but I didn’t know it was a record. 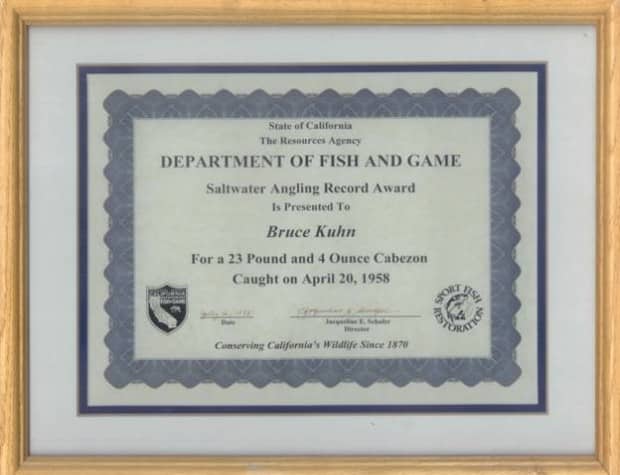 Then someone told me that if I contact The California Dept. Fish & Game, they would send me a Confirmation Certificate.

Later, friends said, “contact the IGFA and let them know.” So first I contacted Biologist Ed Roberts at CDF&G Sacramento who told Biologist Steve Wertz. Biologist Wertz and the Director of the California Department of Fish & Game, Hon. Robert Hight, both wrote a letter to the IGFA.

The Director’s letter brought to life in detail the entire sequence of events related to the 23-pound 4-ounce record cabezon and the fact it was examined at the State of California Department of Fish & Game’s Marine Resources Laboratory by one or more of the state’s most qualified marine biologists.

IGFA turned down the letters from biologist Steven Wertz and the Director of The State of California Department of Fish & Wildlife’s as proof of the cabezon’s record.

So to me, I really don’t care. The State of California Department of Fish & Wildlife holds the World Record for the largest cabezon ever caught on rod & reel and I Bruce Kuhn caught it. It doesn’t have to be an IGFA record to be the world record. If it’s confirmed by the California Department of Fish & Game Marine Resources Laboratory as the biggest, then it’s the World Record.

On April 20, 2021, it will be 63 years since the catch. I imagine the World Record cabezon will still be 23-pounds 4-ounces—held by Bruce Kuhn in California.

I am now 80 years old and can’t tell you all how great it feels to hold a world fishing record. For an angler, it’s “the greatest reward” for one angler against one fish.

I would like to thank Hon. Robert Hight, Director California Department of Fish & Game, Marine Biologists Ed Roberts, Steven Wertz, and Bob Lee, all biologists at the State of California Department of Fish & Game, for all your efforts on my behalf. This is my fish story and I am sticking to it and I have the documentation to back it up—to say the least. 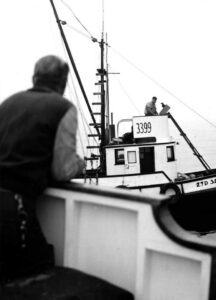 The World Record is the largest cabezon caught on Rod & Reel.  People say…”Oh!…it’s the California Record…23 lbs 4 oz. but the fish is 4 oz. larger than the IGFA record…

That should be good enough for anyone…  The CDF&W Certificate tells the story. 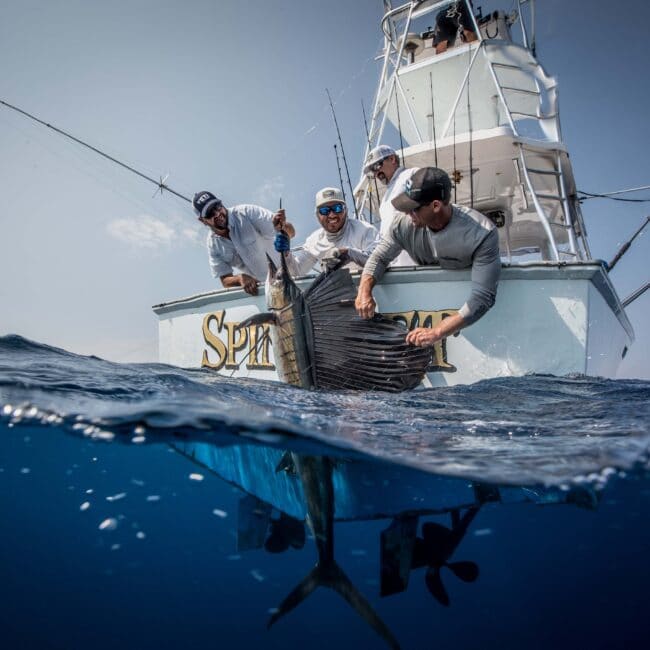