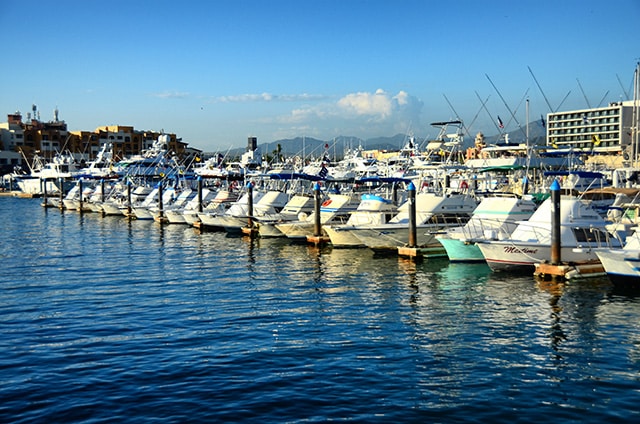 For nine days each October, the top international captains, mates and anglers converge on Cabo San Lucas, the remarkable “fishing field of dreams,” where arguably some of the best billfish and tuna fishing anywhere on the planet is found. 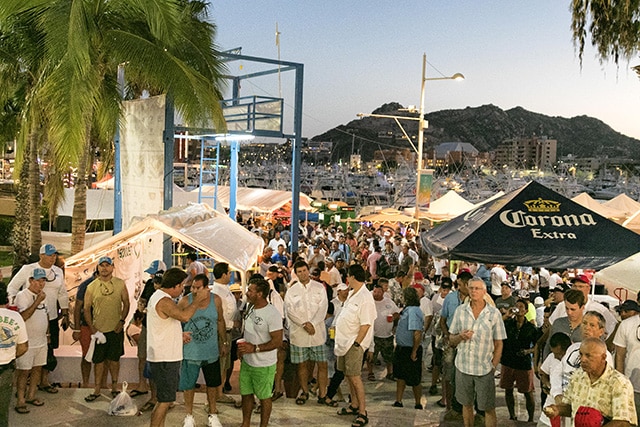 It is there that the Big Game Sportfishing tournament scene is centered, beginning with the Bisbee’s Los Cabos Offshore Tournament. The first event is a two-day contest offering cash prizes to the top three teams based on the single heaviest qualifying black or blue marlin brought to the scale, along with a Release Category that includes black, blue, striped marlin and sailfish as well as a Gamefish Division based on the single heaviest qualifying tuna and dorado. 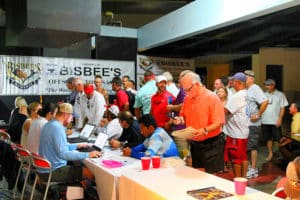 On October 14-16, the record 108 teams competed for more than $773,000 in prize money. Gathering at the Puerto Paraiso Mall to register, the mood was upbeat and the noisy scene was charged with electricity as teams lined up to complete their entries.

Catherine Carr and Marilyn Atkins of Texas were fishing in memory of their long-time captain, Danny Bosque of Cabo San Lucas, who

passed away recently. Bosque skippered Never Give Up, a 35-foot Cabo. “This year we’re giving it our all for Danny, who was our captain,” Carr, of Medina, Texas, explained. “The Los Cabos Offshore is always a fun event; the people are great and Wayne and his family do so much for the Cabo community. We always enjoy the event, but this one has even more significance.”

t coordinator, welcomed the teams and guests and reviewed the rules. Qualifying species include black and blue marlin weighing more than 300-pounds, tuna topping 40-pounds and dorado exceeding 30-pounds. A large percentage of the fleet also entered the optional Billfish Release Division which included striped marlin and sails as well.

The first day began beneath a cloudless sky when the 8 a.m. flare start sent 108 boats racing off in search of big fish. By scale closing time, six marlin and three qualifying yellowfin tuna had arrived at the scale.
Danny Chiodini and the Santana Team were the first on the leader board with a 312-pound black marlin, hooked on a live tuna near the Gordo Bank followed by Deno Merziotis and Team Nice Ride with a 366-pound blue marlin that ate a purple and black plunger lure. It was boated after a 40-minute fight.
“We were out towards the 1150 line and conditions were great,” team member Breck Girod, revealed. “There was very little bait, but good seas and only a few fish. We found one of them!”
Angler Rich Oliver aboard Salsa brought a brawny yellowfin to the scales. The 194-pounder swallowed an orange and brown Sevenstrand plunger. The 35-minute fight resulted in Oliver’s personal best tuna.
Team Octopusi, with Gonzolo Castilla on the rod, fishing on Pangalisa brought a 311-pound black marlin in by late afternoon. 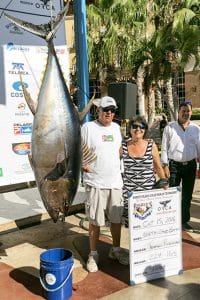 James Rosenwald on North Star was sure he had hooked a large hammerhead shark when his fish ate a big chunk of squid. Tightening the drag on the 80-pound rig, he quickly realized a giant yellowfin was attached to the other end. After a long fight, he boated the 224-pound tuna, which earned top daily honors in the Gamefish Division.

Canadian Mike Maier, a frequent visitor to Cabo, had fished the Bisbee’s for the past five years, but he had never been to the scales. That changed when he and Team Go Naked outlasted a 391-pound blue marlin that inhaled a live caballito.

“That was my biggest marlin ever and first time weighing a fish, so I’m definitely stoked,” he admitted, after the weight was announced to the gathered crowd.
Two more marlin were also weighed on Saturday; both fish fooled by plunger lures. Trenton Twamley on Bull Rider scored a 325-pound blue while Chris Vincent on Go Deeper added a 333-pounder just before the scales closed.
When the scales opened at 2 p.m. on the second and final day, Nacho Bancalar and Team Choyero were the first to arrive with a 328-pound blue marlin qualifier which had been landed on the Pacific side near the Golden Gate after a 35-minute fight. The crew had the fish to the leader six times before finally gaffing. Their lucky Black Bart Blue Marlin Breakfast lure did the trick.
Go Deeper angler Steve McManaman outlasted a 188-pound yellowfin caught in the same grid – B-2 – as their previous day’s marlin. The tuna strike was the only one all day and the team made the most of the opportunity by boating that fish.

Francisco Rochin and his fellow team mates aboard Go Deeper coaxed the only qualifying dorado to the gaff, a 32.4-pounder.
Earlier reports on the Tournament Control radio of a large, boated marlin, fueled the anticipation before the Wild Hooker finally backed up to the IGY dock. Rick Daab of Cypress, Texas, landed the monster black marlin which turned out to be the largest fish overall, topping the scales at 450-pounds. 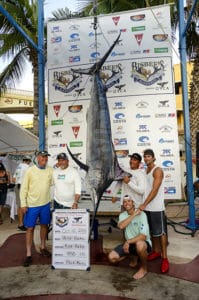 “The fish ate a live skipjack tuna while we were working up north on the Pacific side,” Captain Shane O’Brien of Kona, Hawaii, observed. “It was flat calm out there and just beautiful – a great day for fishing.”
The largest game fish of the event, a tuna, came just as scales were closing. Angler Brian Parker and his team aboard Sin Duda somehow managed to best a Mini-Cooper-sized 283-pound yellowfin.
Angler Rick Daab and his veteran team aboard Wild Hooker earned the largest share of the overall for their 450-pound black on Sunday – $263,951 for the top tournament entry and all three Day 2 optional billfish jackpots.
Mike Maier and his Go Naked Team received a check for $235,034 for his 391-pound blue on Saturday.

Team Nice Ride and angler Deno Merziotis earned a payout of $8,505 after landing the third-heaviest marlin, a 366-pound blue.

Francisco Rochin and his Sea Fever team mates earned a tournament record payout in the dorado division after the prize money rolled over with no qualifiers on Saturday. The team’s 32.4-pound dorado, was worth a whopping $93,230.

In the Release Division, Sea Angel emerged triumphant after releasing four blues and one striped marlin, good for 1,300 points. That effort won the Texas family team $50,830 in prize money.

Pocket Aces rounded out the standings for Third Place, good for $9,775.

From its humble beginnings as a simple get-together for alumni Black & Blue winners more than a decade ago, the Los Cabos Offshore has grown into a world-class event that showcases top angling skills and serious prize money.

On October 17, the “lay day” between the finish of Los Cabos Offshore on October 16 and October 18 when the 36th Annual Black & Blue got underway, the Bisbees held the Inaugural “Sponsor Appreciation Bar Crawl.” The gang gathered at the Baja Cantina, where many dressed in costumes from mundane to outrageous. 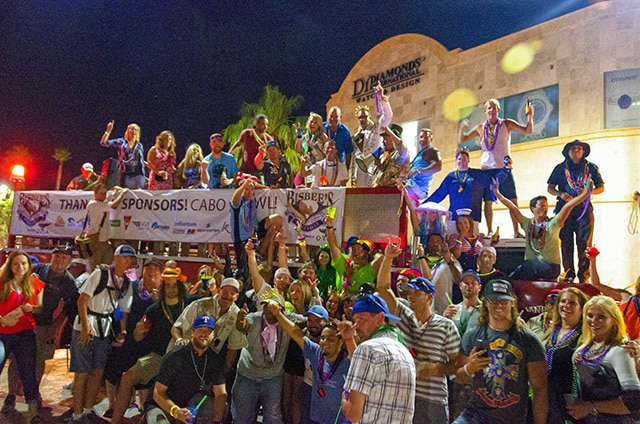 For the next two hours, part of the group rode on a Cabo San Lucas fire truck down Main Street, flinging colorful beads to strolling pedestrians, while the remainder paraded behind on foot. 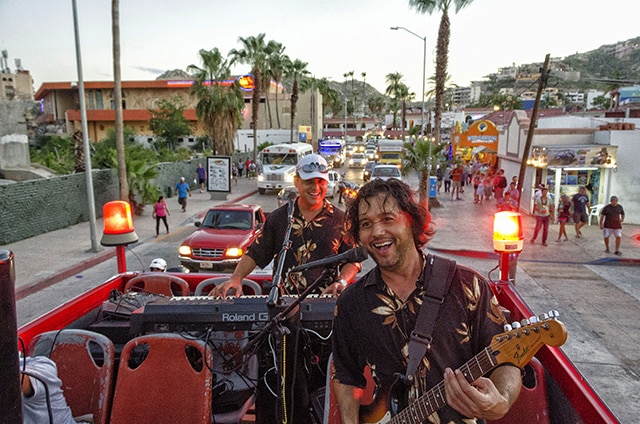 Cabo Max entertained the crowd as we worked our way from bar to bar before reversing direction and returning to Baja Cantina. The popular “Pub Crawl” will probably remain on future schedules.

The less-fortunate children of the communities surrounding Cabo San Lucas were benefactors, as well as the award winners. Thousands of pounds of the billfish, yellowfin tuna and dorado were donated to the Feeding Los Cabos Kids charity, which provides high-protein meals through support centers in the local barrios.

Since the Los Cabos Offshore was designated a charity event, its popularity has grown, as has the number of teams participating in the Black & Blue that takes place in the latter portion of Bisbee’s nine days of October.

With that in mind, and always considering ways to give back to the sportfishing community, the Bisbee family added a silent auction preceding the Awards Banquet and following the three days of fishing the Black & Blue.

Part II of Bisbee’s Nine Days in October… will cover the exciting Bisbee Black & Blue Tournament that has earned the title of “Super Bowl of Sportfishing!