When the powerful Category 4 Hurricane Odile walloped the tip of the Baja peninsula on September 14, it inflicted mayhem.

Homes were destroyed, power and water were knocked out and lives were forever altered.

Stunned inhabitants faced the seemingly insurmountable task of not just replacing their personal, local infrastructure, but regional and statewide as well. That was then and this is now – and the remarkable recovery has been well documented.

Bob Bisbee, Sr., family patriarch and founder of the Black & Blue, flew down immediately and began disbursing low-interest loans and grants to help the local, independent charter boat owners, bait fishermen and eco-tourism guides get back on the water.

The Bisbee Foundation established a Bisbee’s Cabo Relief Fund, kicking it off with $250,000. In partnership with groups like Waves 4 Water and Club Dust, a massive relief effort was created, distributing water filtration systems and erecting temporary houses. 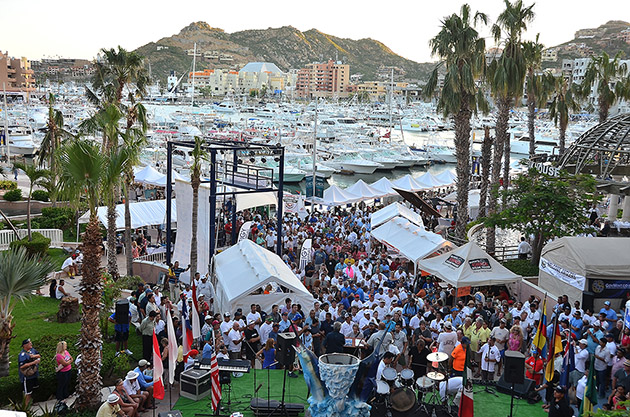 Another initiative, the Charter Hook-Up program, was created by an anonymous benefactor. This program’s goal was to ramp-up tournament registration and put local fishermen back to work. A number of base entries would be paid for anglers who would book the local charters at a fixed fee. Ultimately, 47 teams responded to the generous offer.

Many anglers who had fished the Black & Blue for decades joined with the newbie’s and responded to the call to fish in the 34th edition of the event. When the shout-out to help the local economy rebound came, hundreds heeded the call. The response, as one local noted, was “awesome!”

The results had enough twists and turns to cause a casual observer to believe in both good and bad Karma: some teams being victims and others being beneficiaries. 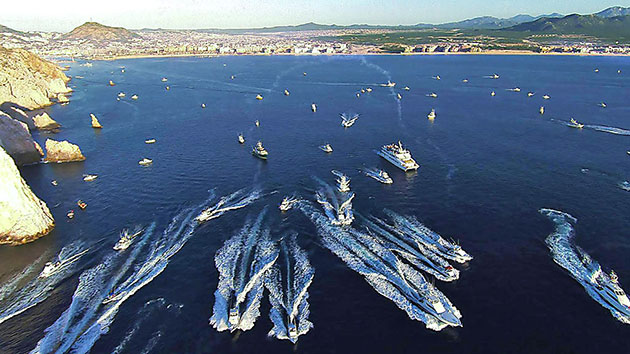 On Day One, 127 teams of anglers boarded their boats, both casual and even a larger number of first-timers – first-timers not only to big money tournaments, but sportfishing itself – jockeyed for a clear shot at the starting line to their carefully picked “hot spot.” As the starting flare arched above their heads, emotions spanned the gamut from excitement to anxiety.

Each team shared one common thought: all were thrilled to be in the hunt.

The twists and turns of fate began the very first day. Canadian tourist Dan Tosczak and his girlfriend had booked their trip to watch the Bisbee’s Black & Blue Marlin Tournament, but when they arrived and learned about the Charter Hook-Up program, they decided to fish. By the time the scales at the Puerto Paraiso Mall closed at 9 p.m., Tosczak and Team Danito and Karlita were the early tournament leaders with a 394-pound blue that Dan landed in 65 minutes.

However, during a standard interview regarding the catch, along with a review of tournament rules, the novice team realized that their fish that had died and subsequently been hand-lined in and therefore would not qualify so they withdrew their catch! 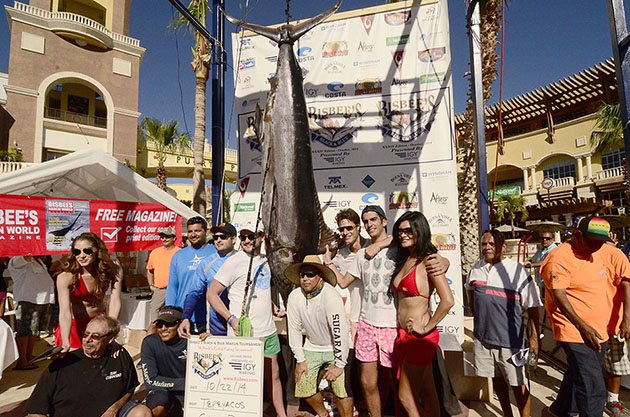 Their action flung the door wide open for Salvador Padilla and his team of buddies from Mexico City who had brought in the other qualifying marlin on the first day, a 304-pounder, just four pounds over the minimum weight, but it felt good to move into first place for Day One. Padilla and Company had also taken advantage of the Charter Hook-Up program and were paired with Tepeyacos, a 32-foot Blackfin. Although Padilla has fished Bisbee events previously, this was his first qualifier. “I don’t know the name of my lure, but it’s now our lucky one and we’re going to fish it the rest of the week,” Padilla said after the weight was announced! “It was a long fight. I can’t tell you where we were fishing, though. That’s a secret.”

On Day Two, boats seemed equally divided as they chose the Pacific side or up toward the Sea of Cortez. Team Tepeyacos left that morning hoping that lightening would strike twice so they could improve their narrow lead. 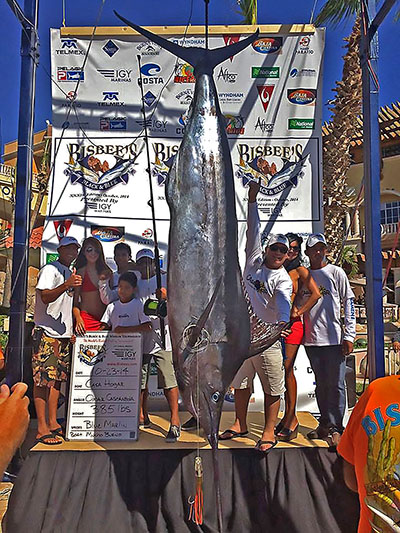 Two blues arrived at the scales with one qualifier and one that didn’t meet the 300-pound minimum. The qualifying fish, a blue marlin boated by angler Omar Castaneda, with Team Casa Hogar and Capt. Ernie Cosio of Cabo San Lucas who is the skipper of Mucho Bueno. “We were at Destiladeras in the Sea of Cortez using live bait and caught nothing. The water temperature was 83 degrees. We switched and put a Hi-5 Petrolero Lure on and three minutes after it was in the water we got our bite,” Cosio said. The 385-pound blue was subdued after a 43-minute fight. Locally made, Hi-5 Lures have been consistent Bisbee’s winners over the years.

“The Petrolero is a swimming lure I designed after seeing a live squid and its colors,” Hi-5’s Ken Matney explained from his booth near the Bisbee’s scales at the Puerto Paraiso Mall. “The skirt is dark brown on top, orange in the middle and gray silver on the bottom. I had netted a squid and it was lit up in those shades, so that’s what I tried to copy for that particular lure.”

As the final day of Bisbee’s Black & Blue unfolded, the tournament workers discussed the possibility of a similar finish to the 2013 Black and Blue when the leader board wasn’t settled until the last fish arrived at the scale after dark. 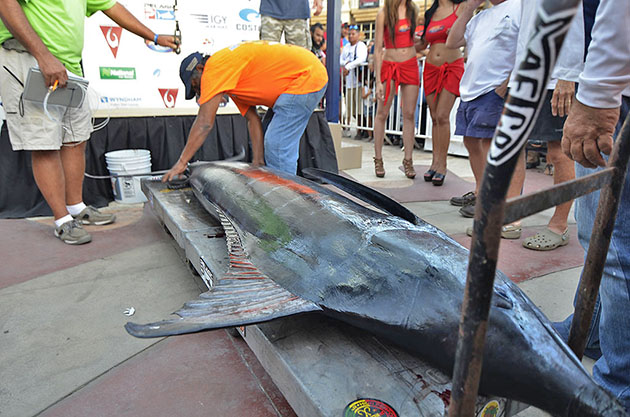 According to Catch Stats, the day produced 18 marlin, with just two actually weighed in. By comparison, Day Three produced 24 marlin, reflecting a “Hail Mary” attitude. Of the seven landed, only three qualified! All the qualifiers were in the three hundred-pound class with the final fish of the night a 303-pound blue. Joel Rivas and Team Rivas Brothers aboard Alegra, one of Hotel Rancho Buena Vista Beach Resort’s fleet boats, arrived at the scale with the 303-pound blue that placed them in 6th place – definitely out of the money. It just made the 300-pound cut-off, but the local team didn’t care. It was a qualifier in the richest sport-fishing tournament in the world!

“Look at this way,” mused Axel Valdez, marketing director of the East Cape hotel the following morning, “Our boat, the Alegra, out-fished 121 teams!”

After all was said and done, Team Casa Hogar was 2014’s top winner. The 10 anglers and crew were fishing on behalf of the local non-profit organization that provides food, shelter and education to under-privileged Los Cabos boys. Angler Omar Castaneda scored the win after landing the biggest qualifying fish of the tournament, a 385-pound blue marlin. That fish took the overall team prize, tournament jackpot, top captain award (Capt. Ernie Cosio) and Day Two $500 Daily Jackpot. 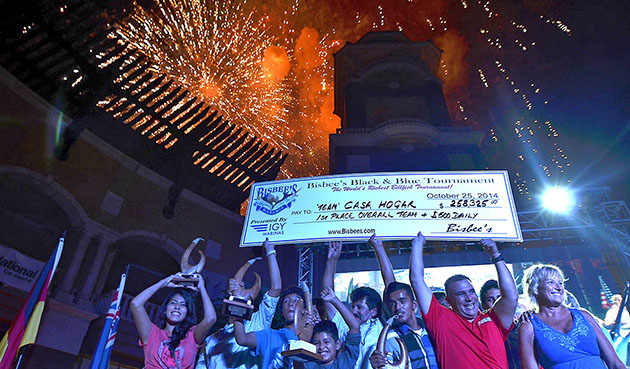 The team donated the entire $258,325 winnings to Casa Hogar.

“We won the Bisbee’s Marlin World Tournament … my first time fishing a marlin,” an excited angler Omar Castaneda proclaimed. “First time in a famous tournament and First Place, let me tell you ONLY GOD does this miracle. God, the Only GOD, creator of all that exists today. He decided to Bless Casa Hogar Cabo AC, with this huge prize!” 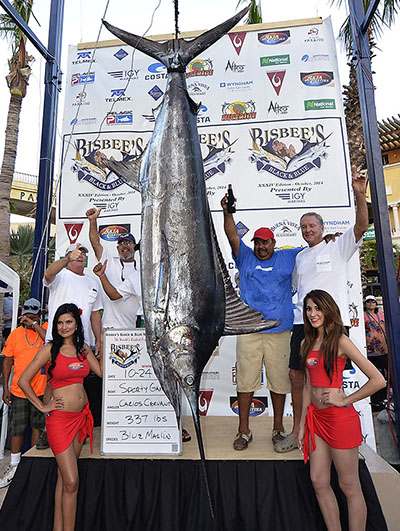 Sporty Game scored the second spot and the biggest payout of the week with 37-pounds to spare. Reinforcing the importance of participating in the different jackpot categories, the team had bet across the board in all possible jackpots in the optional categories earning them $1,682,612 for Second Place.

Angler Carlos Cervantes fed a live skipjack to the marlin near the Iman Ledge and after a short fight, the Sporty Game crew had the fish in the cockpit. Owner/Captain Dan Lewis, of La Jolla, California, has been fishing the B&B since at least 2000. “It was a great fish,” he said after the weight was announced to the roar of the packed throng surrounding the scales. 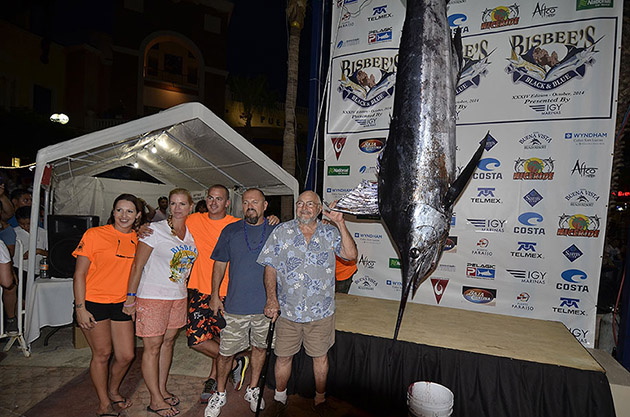 Survivor, a 36-foot Skipjack, weighed the second-largest fish of the day, a 328-pound blue that was captured after a 20-minute fight. Survivor was fishing north of the Gordo Bank in the Sea of Cortez. “We were hoping it was bigger than it is,” said owner Ken Leisher of Whidbey Island, Washington. “But it will do. It was a good catch.”

Baja Benditos arrived shortly after the scales opened at 2 p.m. Angler Nathan Visser and his buddies from Cabo San Lucas boated a 320-pound blue marlin in Grid E-6 after a brief 35 minute fight. It was the first marlin ever by the local team in the B&B and the fish was fooled by a blue/yellow Zuker 5.5 lure. They enjoyed Third Place until Survivor arrived pushing them into Fourth Place.

“The water was calm with a lot of flying fish and porpoises out there. Conditions were good,” Visser said. Baja Benditos ran back out in search of another one in the remaining couple of hours.

In the tightly contested Release Division, Mobius took top honors and the most money – $49,725 – by releasing the first marlin based on time. Suzuka A, one of seven teams from Japan, was second ($17,212) and Los Tapatios took third place and a check for $9,562. For the week, the 912 anglers from multiple countries caught 60 blue and six black marlin.

Said tournament officials, “The twists and turns – in’s and out’s – in this year’s event were pretty remarkable.” Many doubted the October tournament spectacular would be held, let alone be such a success. Not only did it restore a broken community, it handed out cash prizes north of two million and provided Casa Hogar with a cool quarter of a million dollars, plus it provided work for a community that had been idle, and hope for an area struggling to find hope.

Those are enough twists and turns – in’s and out’s – to make anyone believe in miracles.