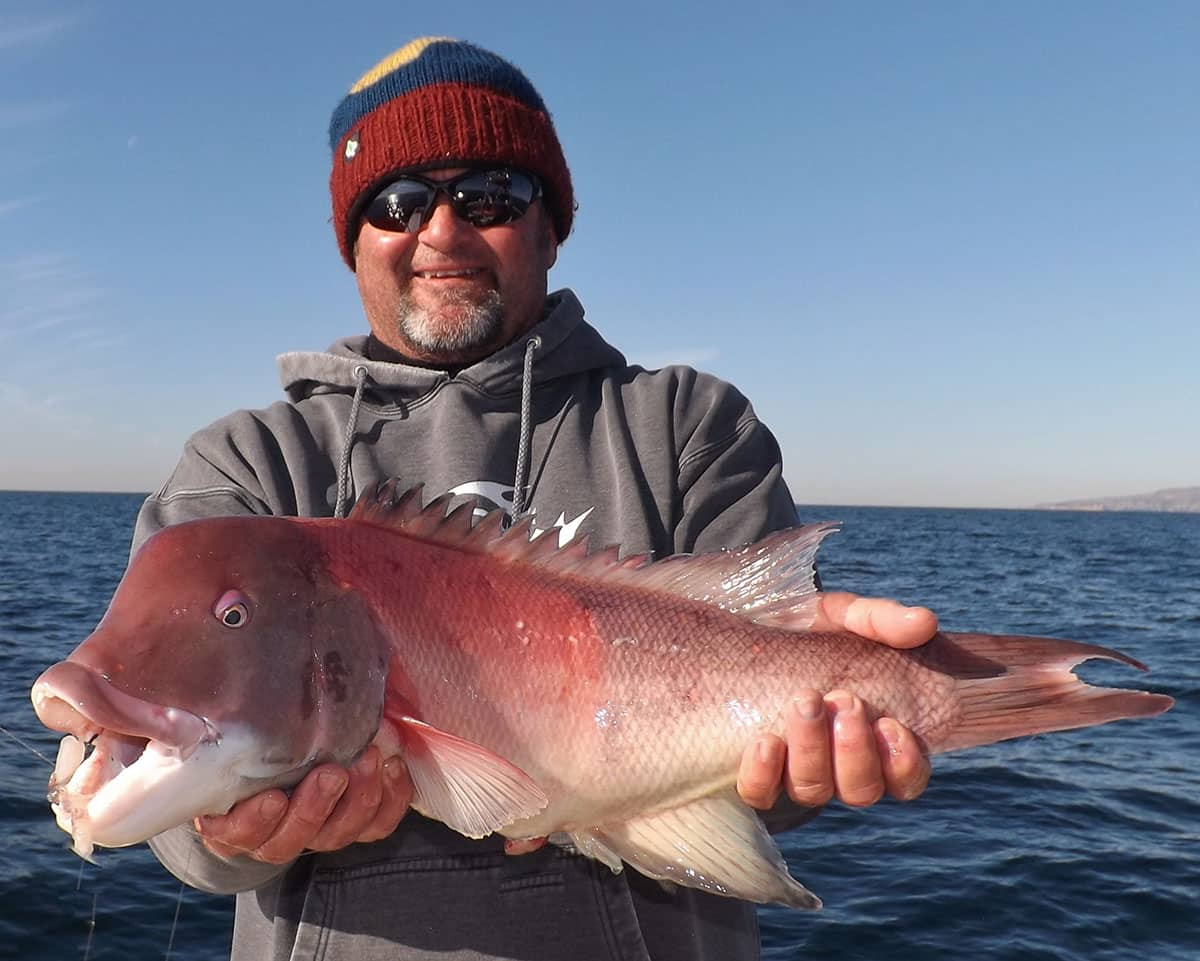 I always try to spend January 1st on the water. I never tire of the thrill from a bent rod and it’s always all the more fun when it starts off a new season on the first day of a new year. Back in 2015, for whatever reason, it didn’t come to pass. It wasn’t until the 16th before my first fish was caught and all was made right but it was a bit unsettling to have broken our long-standing tradition.

Now I certainly can’t complain about the winter fishing last year…it was nothing short of fantastic.

Those big yellows were biting out on the 150 (as well as a bunch of other areas) and we got our share. November and December of 2014 showed plenty of fish but almost all of it was glued to the bottom. We were fishing heavy jigs and dropper looped mackerel in 150 to 250-feet and saw virtually nothing on the surface. But by January the yellows were spread more evenly throughout the water column and we started to get more fish on the surface iron along with those down deep and it just got better and better. It was one helluva a winter!!!

This year (2016) was kicked off properly. The 1st was clear, cold and bright as we left the dock just past the crack of dawn.

My buddy Mike had been out on the 31st and caught what was probably the last yellow of the season in the late afternoon on live squid and he wisely saved the extra bait. So we were all tanked up with plenty of big leatherbacks and full of expectations for the day.

There’s no doubt we all thrive on the thrills of catching big fish while far offshore. But for me there’s also the low-key, quiet satisfaction of that comes from a winter-time trip spent local and scratching out a day targeting sand bass, calico bass and sculpin on the local wrecks, rocks and hard bottoms. Add in some tasty rockfish and huge lingcod once the season opens again on March 1st and the stage is set for some fun fishing.

For our inaugural trip I started on a longtime favorite spot, a load of rocks destined for breakwater construction that somehow slipped off the barge while in transit. There are many of these “missed loads” as they’re known scattered around and they all provide excellent fish-holding structure. Instead of a solid, monolithic rock these spots have lots of nooks and crannies for the fish to hide in; just picture a small section of breakwater sitting on the bottom all by itself. It’s no wonder these spots are often more productive than natural hard bottom. Mike started off the year with the first fish…a nice sheephead that was carefully released.  Then I backed him up with a dandy sandy…my first fish of 2016. Conditions were tough with wind against the current but once we got properly positioned the live squid worked its magic. We caught and released a nice sample of sand and calico bass as well as some nice sheephead and everything was safely released. It was a great start to both the day and the season. But with a tank of prime squish and the chance for the bigger exotics in the nearby deeper water it was time to make a move.

We gave the 150 sector a good look for a couple of hours for no bites, no meter marks and no visual signs at all. It was just a down day on the yellows. So we headed back inside and hit a couple more spots for more of the same. Pete finished off the day with on the last cast and got the jackpot with this nice sheephead. As the day rolled into the later afternoon the wind backed off and the swell dropped to next to nothing. It’s one of the things I love about winter fishing; along with the solitude is the fact we’re often blessed with flat calm weather and the 1st was no exception to the rule. It was fun, simple fishing with good friends and great weather and it definitely made for a more traditional start to the New Year!!! As I’m punching out these last few words at the end of the year, a lot has happened on the water. The stellar winter yellowtail fishing of last year has been sporadic at best. There has been some of the bigger fish on the bait grounds at La Jolla and a few scattered along the coast from there up to my zone off Long Beach. We’ve had a sprinkle of fish around but nothing like the volume we witnessed last year. But they water temp is still 60-61 with lots of bait so maybe they’ll still show up.

Of perhaps even more interest is the seabass situation. Last year with the lack of squid along the coast it was a different fishery. There was good signal of big fish around for a while but it was a different setup. Much of the fishery was based on fishing big baits on the edge of structure; a totally different deal than camping out on the squid grounds. This year with the cooler water temps there seems to be a bit more squid around and we’ve already seen some positive signs of the fish right with it. A 74 was caught by a kayaker off La Jolla, a 63 was caught near Newport just the other day and there was a decent pick on big fish in Santa Monica Bay for the first two weeks of the month. This bodes well for the season developing on schedule and again…it is a more traditional start. I’ve blocked out a bunch more time to fish this year and hopefully conditions are such the fish move back in to their historical haunts at Catalina, Clemente and SBI…I love fishing seabass at the Islands!!!
Just a little postscript to remind you guys that if you’re planning a bait system upgrade please don’t wait too long. Last year was crazy busy and this year has started off even more so as we’ve added several new tanks to the lineup. Take a look at one of the new arrivals…the PE-80-SDI. This single tank was specifically designed for a customer with a 35’ Cabo flybridge. We make a double tank with the same base dimensions (24”W X 40”L) but he wanted a single so we made it for him. Then we made it even better. The “DI’ in the part number specifies a dual inlet, one on each end. They will increase the water flow and distribution to keep your bait better during the high-stress days of warm water and biting fish during the summer and fall. It’s turned out to be an extremely popular size for many other sized boats, even those much smaller. By the time you read this article the tank pictured below will be installed on Rick (Rockcod Rick) Maxa’s brand new 25’ Parker center console fish-killin machine. Watch for more updates on this project.