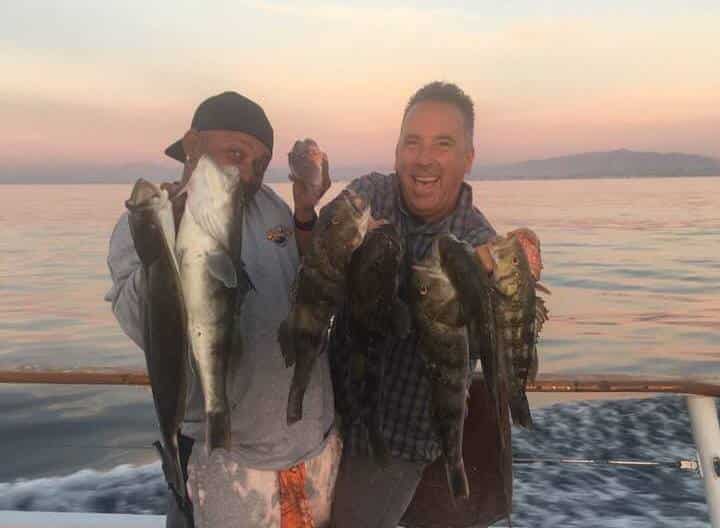 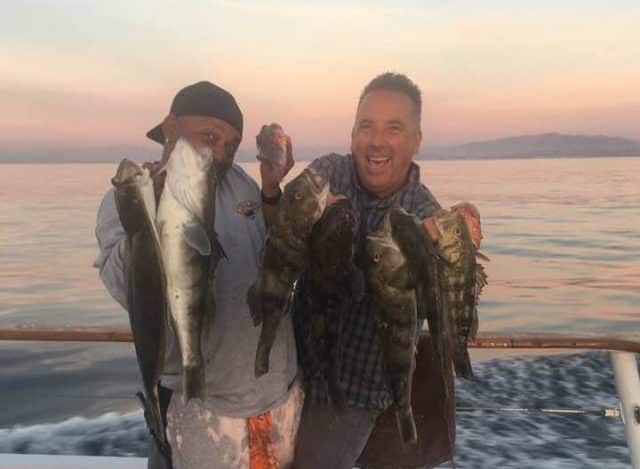 Not gonna lie…it’s been a slow week.

It’s not normal to be catching bluefin tuna and paddy yellows in the winter.  Same thing catching half-day yellows.

What’s normal is sculpin and bass and mix in a trigger fish.  If you’re lucky, you might score a halibut.  That’s normal winter sportboat fishing in Southern California.  Those are my buddies, Gene Patterson and John Anjard (top), on the half day boat, Dolphin Sportfishing, out of Fisherman’s Landing in San Diego. 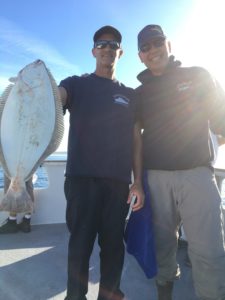 To me, that’s not a bad thing.  I’ve been on a few sculpin and sand bass trips this year.  I rode the Spitfire last month and almost pulled off the stretch goal of catching a legal halibut (22 inches).  We had good fin bait on the boat, and after catching my limit of 5 sculpin, I did a little hunting and found one that ended up being just short of the mark.  That’s owner/operator, Jeremy Maltz, holding the fish up for a pic before we released it.

I did the afternoon halfie on the Dolphin before getting on my Pacific Queen – Colonet trip.  Capt. Kody Kessell drove us out to the submerged pipe off the beach from Tijuana.  It would’ve been good fishing had the conditions not been snotty.  We just couldn’t hold the spot where Kody wanted to be.  When we were there though, fish were biting.

All was not lost though, I learned about a new presentation (for me at least) while I was fishing with those guys…

They called it a “Knocker Rig” 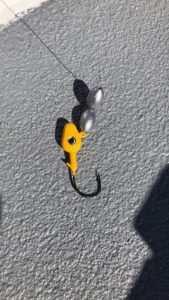 When I saw it on the boat (left), I thought people were doing it just to add additional weight because of the conditions.  I found out later it was the rig the crew was recommending.

Pretty simple setup; it’s your standard lead head & squid presentation, but adding one or more sliding sinkers to it.

On our way back, I was sitting up in the wheelhouse with Kody and crew member, Corey Gambill.  Corey theorized it worked because the sliders knock against the lead head and each other, and the sound gets the bass’ attention.  Kody theorized that the slider(s) hit the ground at a different point than the lead head and kick up some dirt.  The multiple landing points create an illusion of movement that attracts the bass.  Either way (or maybe it’s another reason why entirely), they both testified to the fact that the rig was more effective than the typical lead head and squid presentation.

We’re less than a month away from the rockfish opener March 1st.  Everything changes once the boats have rockfish to fall back on.  More boats will be out looking, and good things happen when our great captains and crews are on the water en masse.  Until then, get on a local boat and give this rig a try.