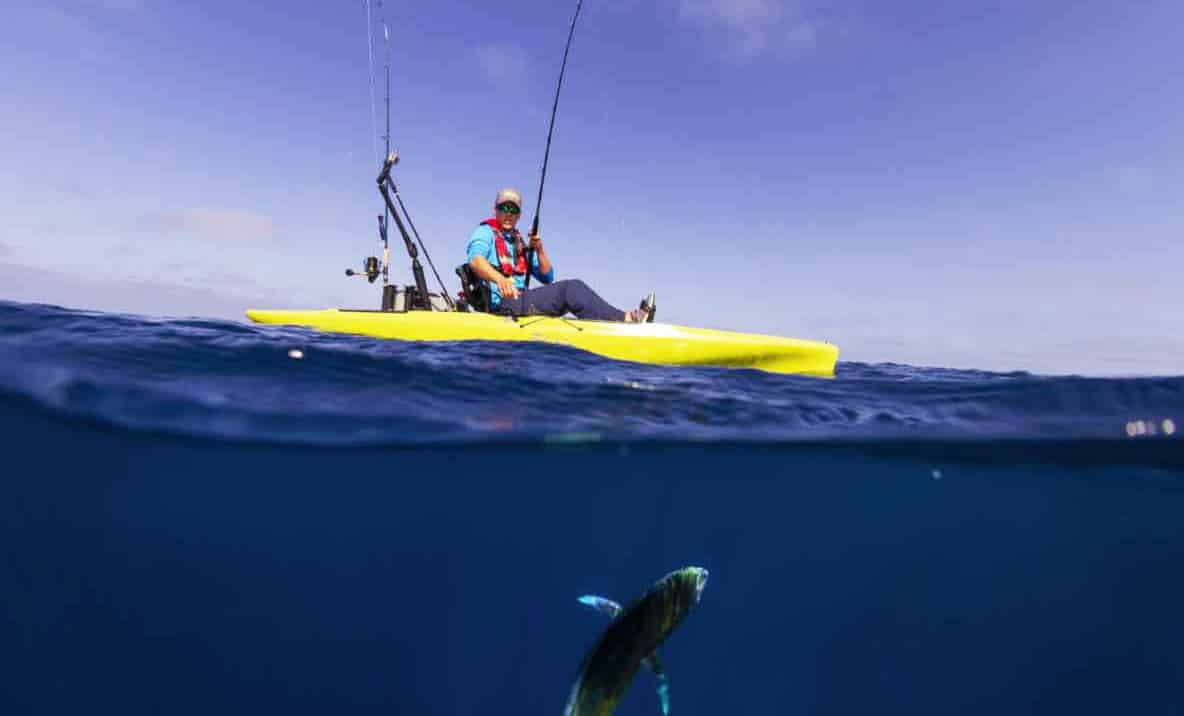 If you enjoy close-quarters combat when you attack the fish, the Hobie Mirage Pro Angler 360 belongs in your arsenal.

Whether you want to get into some big-game kayak mother ship fishing, hunt for huge white seabass from a kayak, or test your skill in a radical competition like the Extreme Kayak Sailfish Tournament, there’s no doubt that sitting mere inches above the water while battling a fish heavier than your boat is a serious thrill. There’s also no doubt that kayak fishing has become spectacularly popular in recent years. And finally, there’s no doubt that among the fishing kayaks on the market, Hobie’s Mirage models like the Pro Angler 12 and the Mirage Sport are top-tier competitors. And, they just got even better.

Hobie pioneered pedal-propulsion on kayaks with its MirageDrive, which amounts to a pair of underwater fins that swing back and forth to displace water and provide thrust, as opposed to utilizing a propeller-like most other pedal drives. This has a number of advantages: you can stop pedaling with the fins flat under the boat to reduce draft to hull draft alone; the flexible fins won’t break or chip if they hit a rock or obstruction while in motion, and there’s very little drag as compared to a propeller and drive unit.

Prop-driven yaks first hit the water with an advantage, however: pedal backward and you had reverse drive. In 2019 Hobie again changed the game, by introducing the MD180 drive. With this upgrade, you could pull a tab and flip the direction of the fins to shift into reverse. Now for 2020 they’ve upped the ante yet again with 360 drive, which can provide thrust in any direction and may make for the most maneuverable pedal kayak ever developed. Plus, in yet another twist invented what they’re calling “kick-up fin technology.” The kick-up fins are hinged at the front, so if you run over a log or hit bottom they temporarily disengage and kick back out of the way. As soon as you’re past the obstruction, they flip back down and get back into action. Similarly, the rudder (controlled with a small lever next to the seat) also flips up upon impact.

Just how much speed can you get out of a Hobie with the MirageDrive?

Naturally, the exact figures will vary depending on your weight and fitness, wind speed, water conditions, and load. But on a calm day with a light load, we found a 180-pound male in decent physical shape had no trouble at all maintaining around three mph, and pedaling furiously, could hit about five mph.

Unlike the cheap “fishing” kayaks you’ll see in many big-box stores, the Pro Angler 360 is equipped for serious duty. Sure, there’s a pair of molded-in rod holders. Everyone’s got that. But there are also horizontal rodracks, two Plano tackle boxes in a built-in compartment, a built-in transducer mount (side-scan compatible) with a retractable transducer shield, and a forward mount ready for your fishfinder head unit. Still, what kayak angler doesn’t enjoy a bit of customization? And the boat’s ready for this, too. It comes with “H-Rails” running down either side. These are extruded aluminum and allow for the quick attachment of adjustable rod holders, cup holders, tackle stowage bins, G-Holds (for gaffs, nets, and other long-handled tools), and mounting plates for electronics units. There are also H-mounts for 1.0” and 1.5” RAM ball, YakAttack, Scotty, and Railblaza mounts.

Awesome though it may be, no boat is perfect – and that goes for kayaks, too. In this case, the knock is an obvious one as soon as you ask the question “so, what does it cost?” The Hobie Mirage Pro Angler is available in two sizes, a 12 and a 14. The smaller model MSRPs at $4,599 and the larger one at $4,799. That’s a pretty substantial chunk of change to spend on a one-man boat that fits in the bed of your pick-up truck.

It must be pointed out, however, that you get what you pay for, and one of the hugely important things about fishing from a kayak is comfort level. Spend $500 bucks on one of those basic sit-on-tops that have a molded-in seat, and after a few hours of fishing, your back will feel like someone’s trying to pry the vertebrae apart with a screwdriver. The Pro Angler, however, comes with Hobie’s Vantage seat. The back, bottom, and lumbar support are all adjustable, it has comfy full-length armrests, and hammock mesh allows for airflow. The first time we experienced fishing in a Vantage seat, the comfort level was nothing short of shocking, and we’ve found that you can sit in one for eight or 10 hours at a clip without a problem.

Do you want to partake in a rather radical angling adventure? Fishing from a platform that might be smaller or lighter than the fish you’re after certainly qualifies as extreme. And no matter what prey you’ve set your sights on you’ll have a tough time finding a more competent fishing kayak than the Pro Angler.