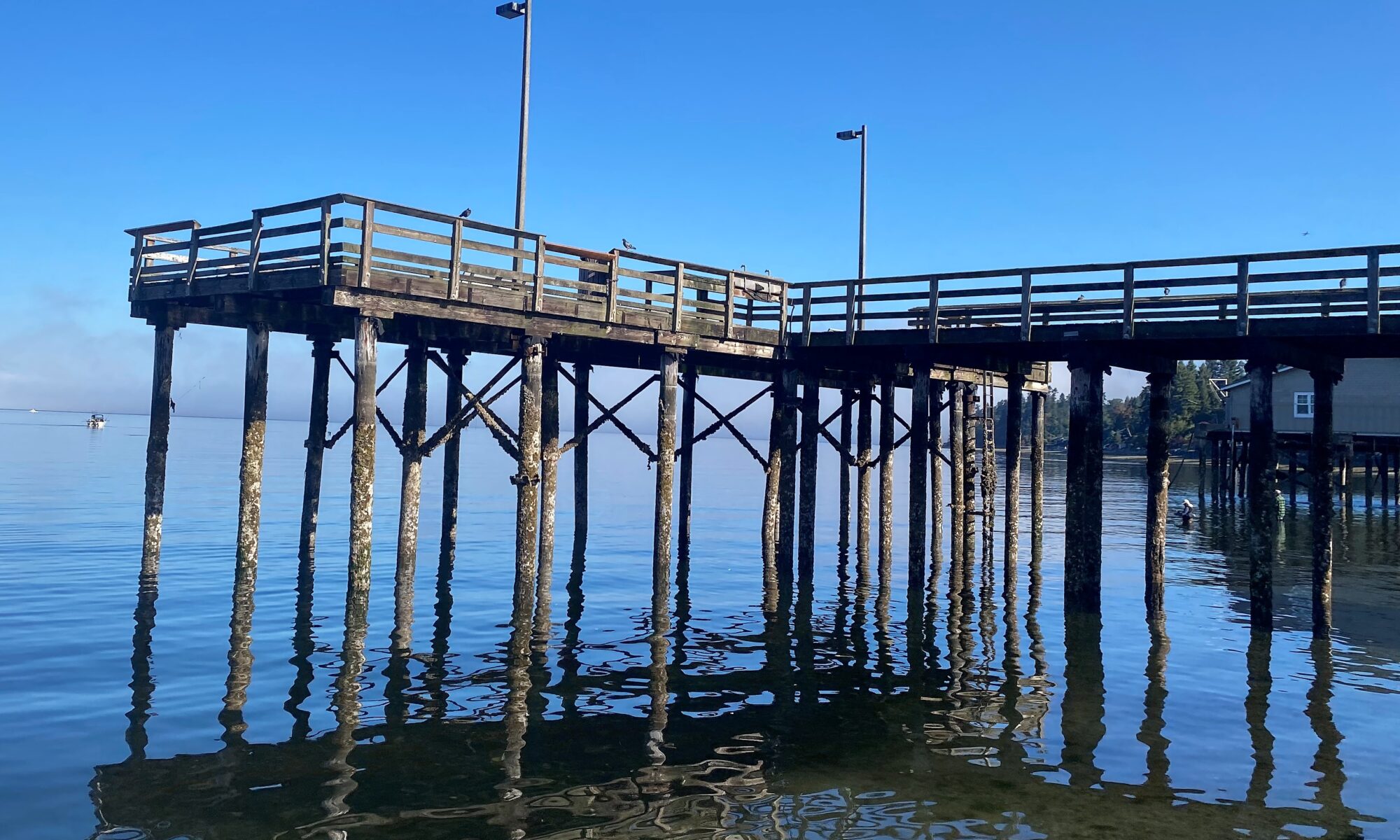 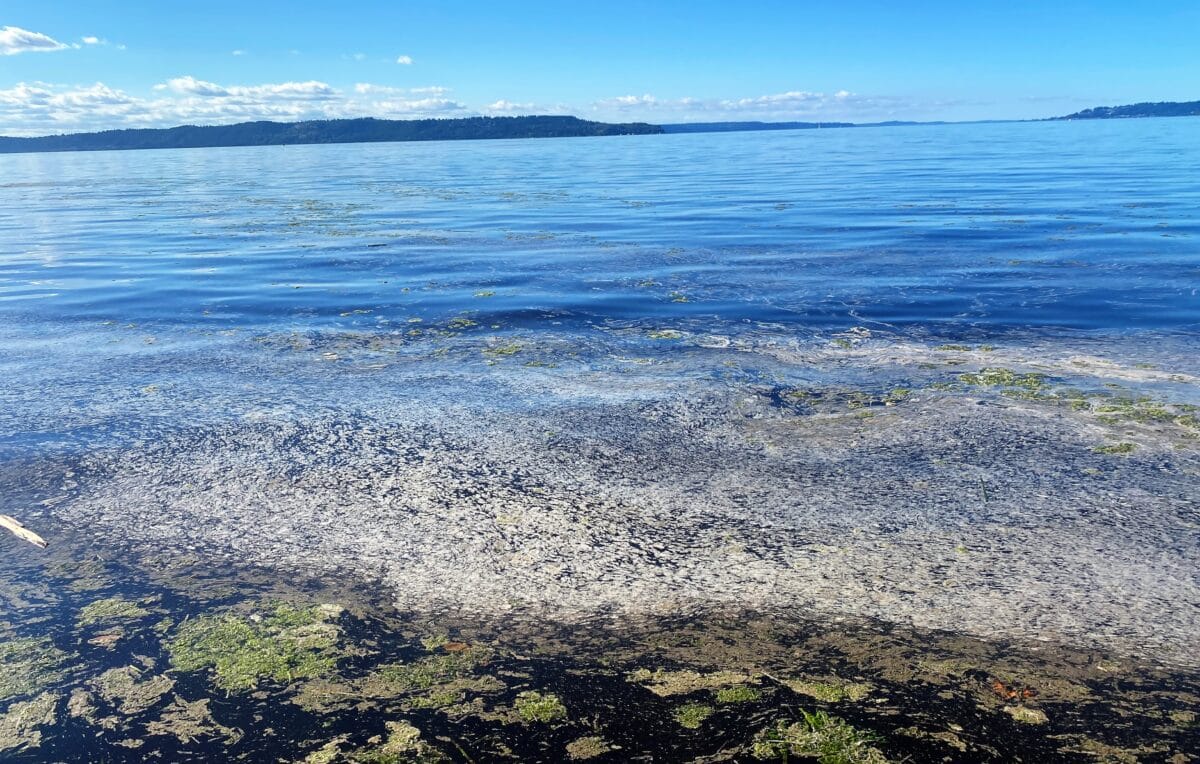 This was the sight that greeted me when I got to the spot.  UGH!  I put in 25 casts, shook off a few shakers and picked a lot of seaweed off my gear before calling it a day. 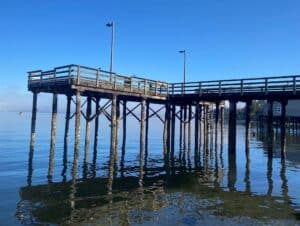 I “discovered” this spot on Saturday afternoon.  It’s the sliver of dock at the boat ramp of my home pier growing up.  It’s where my fishing journey began so many years ago.  The pier was closed last year when a concerned citizen reported to the city that there was some small structural damage underneath.  Instead of making the repair, the city closed the pier indefinitely to avoid the potential legal exposure.

The water was clean on Saturday.  I met a guy named Lee who knew all the regulars that I met this year at Dash Point Pier.  We went to the same high school but he graduated 5 years after I did.  Lee gave me the rundown of the terrain and where there were potential snags.  He’s caught 9 kings (vs. my 2) this year at various piers around Puget Sound.  I mentioned last week that this year’s run is proving to be a disappointment, so in this context, his tally is that much more impressive.  Lee shared a little trick with me that he felt helped him out this year.  I promptly went to the tackle store and acquired the items I needed to replicate Lee’s setup.  I went back yesterday afternoon because the conditions looked right, and I was anxious to put Lee’s advice into action.  Given the lackluster result, it dawned on me that the big moments for this particular fishing situation are probably over for the year. 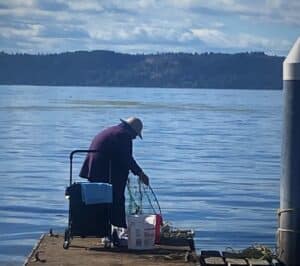 While I was there, I met an elderly woman who was crabbing.  We shared the spot for the hour or so that I was fishing.  She knew what I was trying to do and told me that most of the fishermen she meets are very patient people.  I told her,

“It’s a low percentage sort of situation.  But I feel like if I consistently put in that time, then eventually it will happen.”

I thought about our conversation on my way home.  Why do we do it?  Unlike the flounder fishermen that are practically guaranteed to come home with fish every session, this pursuit aims higher.  What is the motivation that keeps me coming back despite those low percentages?  Every time I go with the optimism that today might be the day.  Yet it’s only been 2 days out of maybe 6 weeks that I’ve gotten the desired outcome.

And yet I keep coming back.

I’m not going to pretend to speak for all fishermen, but I like solving puzzles.  I like to learn new things.  I love learning something new, understanding when to deploy that new bit of knowledge, and see it come to fruition.  Today wasn’t that day, but it’s happened often enough that I know I’ll get my shot eventually.  The best stories, the ones we tell like-minded fishermen, are the ones where it wasn’t easy.  The ones where we suffered some heartbreaks but learned from the experience.  The ones where when we got another opportunity, we seized the moment to finally achieve the goal. 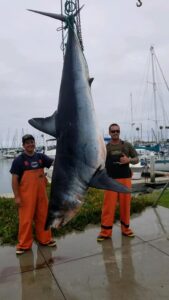 I did get my pier salmon this year.  I just didn’t have that redemption moment after losing the big one.  Reflecting on this particular chase, I came to accept that my modest level of success is probably going to be it for now.  I’ve met people in these last six weeks who are still chasing their first.  I’ve earned the respect of the regulars…my pier peers if you will.  So if this is it for this season, I can chalk it up as a win.  But you can be sure that I’ll be counting the days to resume this journey next year.

I wrote last year about Bo Scanlon’s successful quest to catch a huge mako (right).  I’ve got a couple of ideas of some other peoples’ successful quests I’d like to bring to these pages while I figure out a new pursuit of my own.

What fishing pursuit are you chasing?

I love hearing these stories.  Tell me yours…maybe I’ll write about it here.   Good luck if you get out there.