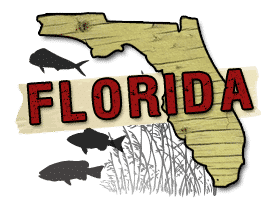 Florida is a boater’s paradise with more than 1,350 miles of coastline running down the Atlantic seaboard and the Gulf of Mexico. The state has always held a reputation for hosting one of America’s most diverse fisheries. Anglers can target a wide range of game fish in the Sunshine State. From bonefish in south Florida to high-flying sailfish and world-record-sized tarpon, there is something for everyone in Florida.

The biggest decision any angler planning to fish in Florida has to make is what species do they want to target and what area do they plan on fishing?

There are so many different regions in Florida to fish, so here is a quick picture of what each region has to offer.

The Florida Panhandle refers to the Gulf Coast region that stretches from the Alabama border and runs east to Apalachicola. This area is less populated than the busy southeast portions of Florida. The larger coastal cities in the Panhandle include Pensacola, Destin and Panama City. Many offshore boats head to the continental shelf and fish the offshore canyons, edges and oil platforms. It’s a bit of a long run to the grounds from the Panhandle, but the payoff is world-class tuna fishing, swordfish and billfish. If an overnight trip isn’t your thing, there are plenty of fish to chase around inshore, especially redfish and sea trout.

The west coast of Florida, running from Cedar Key south to Naples encompasses some of the best inshore fishing in the state, especially for tarpon. Crystal River, Tampa Bay, Boca Grande and Fort Meyers are home to very productive tarpon grounds. There are also plenty of wrecks in the Gulf to target grouper and red snapper, or you can head west toward blue water and troll for the usual offshore suspects.

South Florida and the Florida Keys

South Florida is known for its diversity when it comes to fishing. Swordfish and sailfish make up the top offshore game fish, as well as dolphin fish, wahoo and tuna. Moving south the Florida Keys make up some of the most prolific fishing grounds in the country. From Key Largo to Key West anglers target inshore species in Florida Bay with tarpon, bonefish, permit, snook, sea trout and redfish reigning as the prime game fish targets. There is literally something biting on the flats all year. Lobstering is also popular in South Florida.

Offshore you can find a massive population of sailfish working the reefs in the winter, and dolphin fish, blackfin tuna, king mackerel and wahoo in the warmer months. Reef fish such as yellowtail snapper, amberjack and grouper are also popular. As are sharks and a long list of other game fish.

This area is known for its world-class redfish action on Mosquito Lagoon and the Indian River system, as well as the cobia, tripletail and tuna action off the coast of Port Canaveral. The offshore boats in this area pioneered fishing the “other side” of the Gulf Stream for big yellowfin tuna. Boats head 100 miles or more to fish the east side of the Stream and rarely get skunked. The cobia fishing is also world class here as is the tripletail action. The red snapper and grouper are also great when targeting the wrecks and rockpiles.

Although the Gulf Stream is a good distance away from this portion of the state, the boats that make the run are rewarded with sailfish, marlin, tuna and dolphin fish. Inshore, massive red drum spawn around Jacksonville, making for some great fishing. Other action includes pompano on the beach and sea trout in the St. John’s River mouth.

For fishing license and regulations, visit the Florida Fish and Wildlife Conservation Commission at myfwc.com.