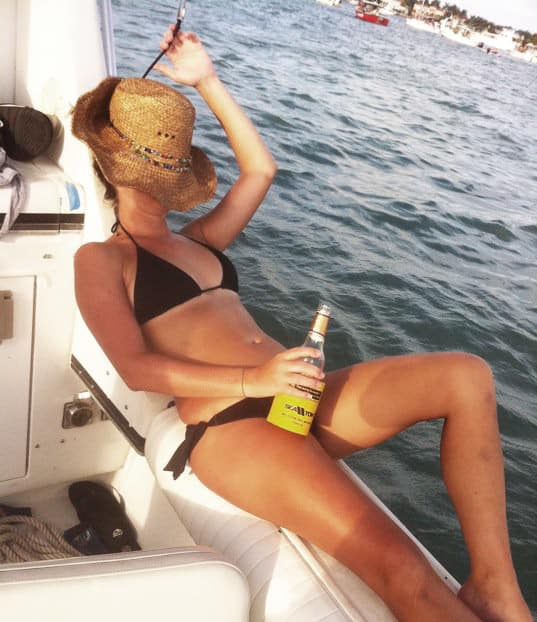 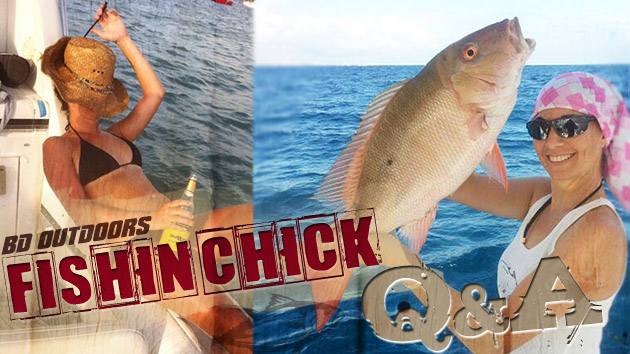 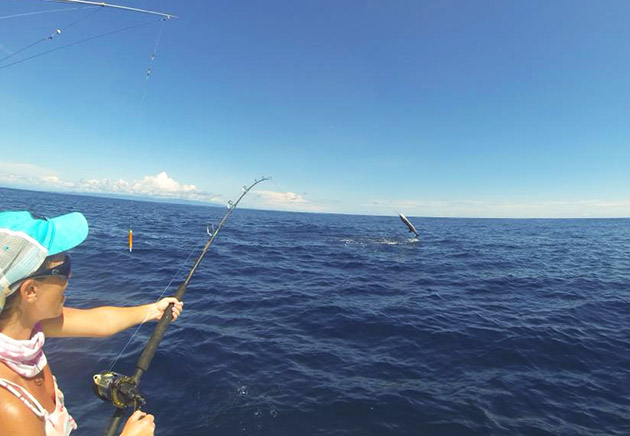 Maureen Mascaro: I am a commercial real estate construction project manager at Cresa in South Florida. I advise and represent tenants during the process of selecting an architect (to design) and a general contractor (to build) their new space. It is mostly interior office build-outs in Downtown Miami but we also do warehouses and call centers. As a PM, we manage the client’s budget and monitor the construction progress to ensure the project is delivered according to the client’s expectations. What I like most about my career is the mix between meeting with top executives to work through project design details one day and being in my jeans and boots kicking mud at a jobsite the next. No day is ever the same and no project is ever dull. 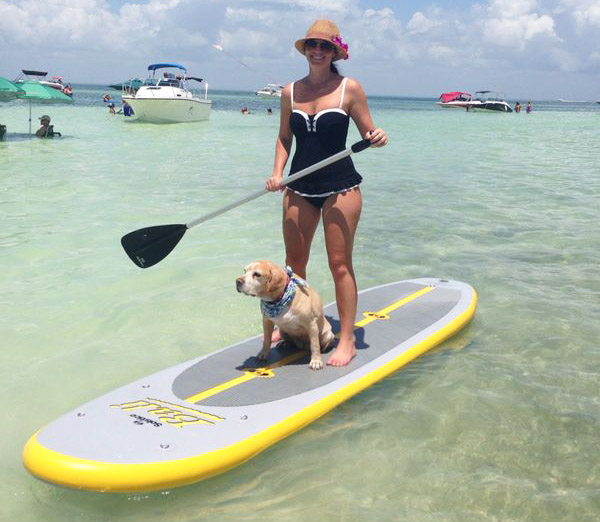 Maureen Mascaro: Fishing and boating in general is my passion but I also spend a lot of time reading and when I can, I write. I also scuba dive, paddleboard and enjoy cooking, especially if it is my catch. I love live music so I go to a lot of concerts. Traveling is something I can’t live without and have been to Germany, Italy, Bimini, Jamaica, Trinidad and Tobago, Costa Rica, and almost every state in the continental United States. 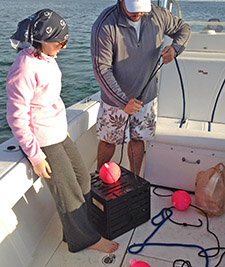 Maureen Mascaro: I caught the bug about four years ago when I met a friend-of-a-friend who was having a hard time getting his normal fishing buddies out on the water as often as he wanted to go out. I kept offering to go and although I was probably Dave’s last resort, we ended up going out fishing quite often. He wasn’t a man of many words back then so I learned little by little through watching, listening to his instruction during a fight and asking questions when I knew specifically what I wanted to know more about. At first it was mostly bottom fishing over reefs and wrecks but then as the seasons changed he taught me trolling and kite fishing too. I’m not very good at it yet but he also introduced me to spearfishing and lobstering. 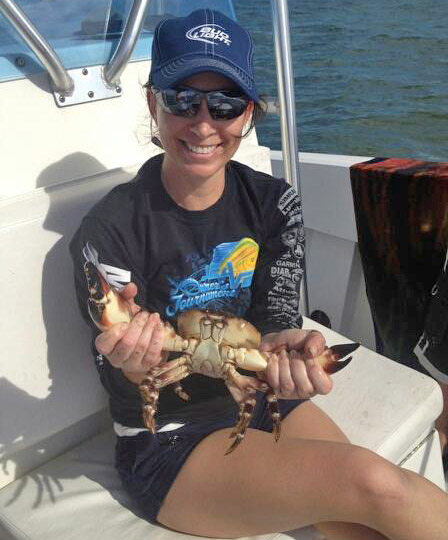 When the next stone crab season came around in 2013 we both bought traps and checked and re-baited them regularly in the mornings before fishing. That was actually a blast and I’d recommend it to anyone who is looking for an excuse to get on the water every weekend. After about a year of fishing with Dave, I knew I was caught so I started to attend fishing seminars and take classes through IGFA as well as reading as much as possible about fishing. I also joined two science/fishing clubs that meet monthly which has been invaluable for broadening my understanding of the ocean and for networking with other local anglers. Dave Bustamante introduced me to a sport I knew nothing about and had never had exposure to and encouraged me to take it wherever I wanted. We became good friends through this shared passion and still fish together. 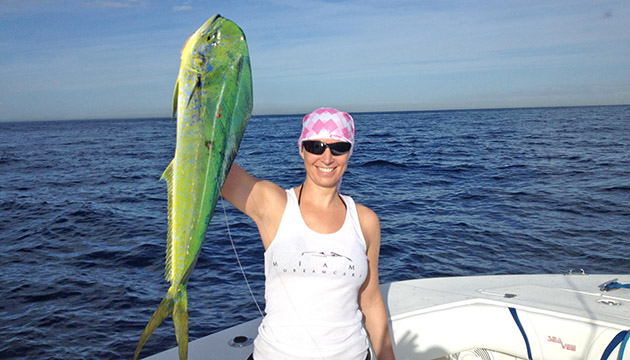 Maureen Mascaro: In South Florida, the Florida Keys and the Bahamas I have targeted amberjacks, grouper, yellowtail, cubera and mutton snapper, permit, pompano, dolphin, tuna, sailfish, swordfish, and wahoo. The barracuda has been a steady by-catch and I love the fight they put out. 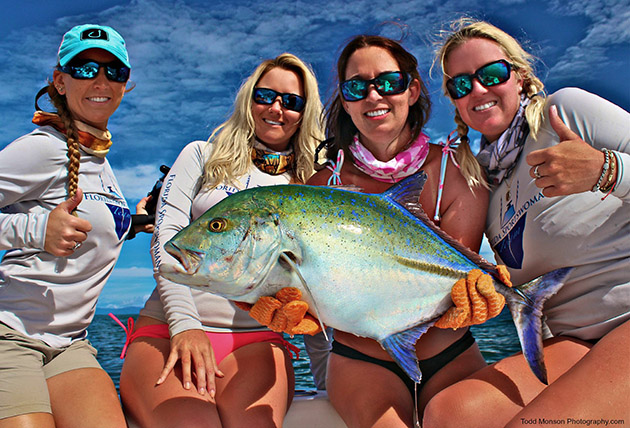 In Costa Rica I went with the Florida Sportswoman fishing team to the highly recommended Crocodile Bay Resort in the Osa Peninsula to target roosterfish and although we didn’t get any onboard I was able to land a few other amazing firsts: a Pacific sailfish, an african pompano, a jack crevalle and a stunning bluefin trevally. 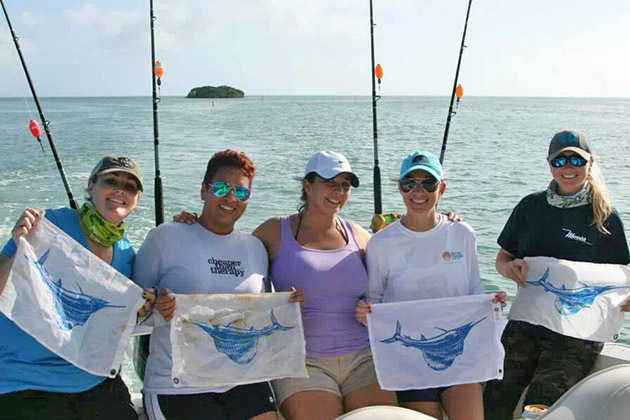 In the Florida Keys, I took out a group of ladies out with The Ultimate Catch’s Captain David Bardzick. Each of us ladies got a turn at landing a sail and we brought in four! For three of us, it was our first ever Atlantic Sailfish. – that was an amazing day and I was so happy to share the sport with some of my girlfriends who had never fished offshore before. 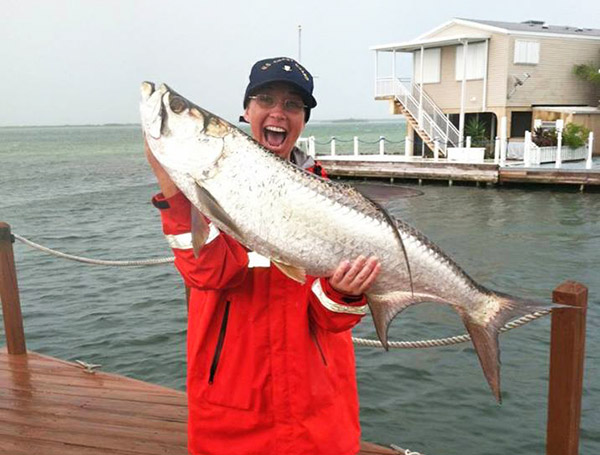 Recently in Trinidad, I searched for and found the monster Silver Kings (tarpon) where it is legal to actually harvest and eat them, which our captain happily did in lieu of a tip. 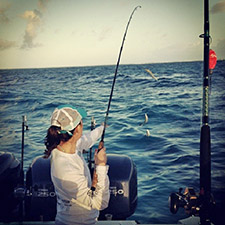 Maureen Mascaro: Offshore trolling for sure. A perfect day out on the water would be an early morning start to a bait spot, chumming the water up, casting the sabiki rod out until a crowd gathers and then throwing the net to pull in the rest. After that, we’d head offshore and raise the kites. After enough work, we’d hook an acrobatic sail that puts on an amazing display and plenty of photo-ops, land him for a quick hug and kiss and send him back on his way. After that we’d try some more and hook up to a wahoo or tuna and have him for lunch right on board. We’d then crack a few beers and sling in some dolphin before heading back in to fillet them, clean the boat and equipment and then eventually crash into the best sleep of my life. 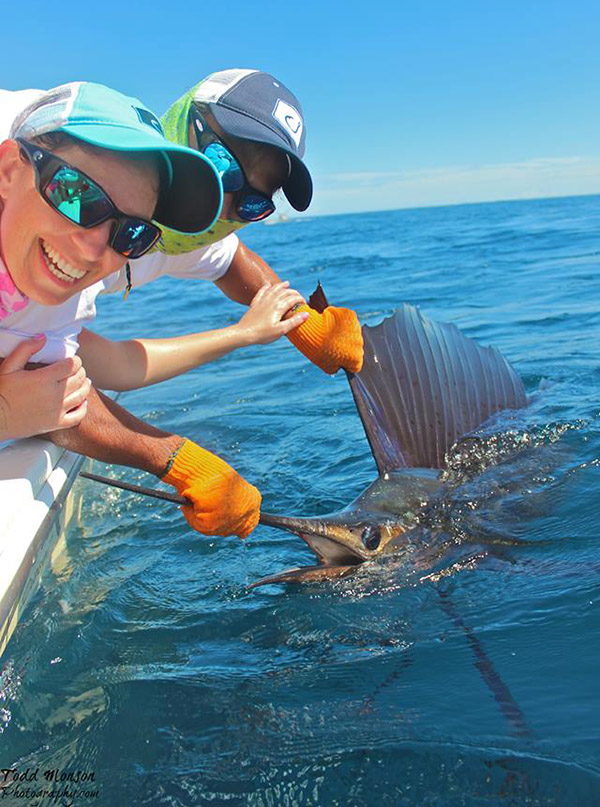 Maureen Mascaro: Tournament fishing is the next milestone. Earlier this year I took the IGFA Observer Training course with the goal of traveling internationally to qualify the fish caught during high-dollar billfish tournaments. Over the next few years, I hope to make some great connections and pick up a few pointers and take that knowledge to the local South Florida tourney circuit. I am looking for a consistent group of anglers to compete with but in the meantime I am accepting invitations to fish with other teams as the female angler. I’d like our names to be up on that leader board a lot. If I end up actually having any skill in competing, I’d like to try the international tourneys a few times a year and go from there.

I like to say I’m a “Miami based, internationally bound angler”. 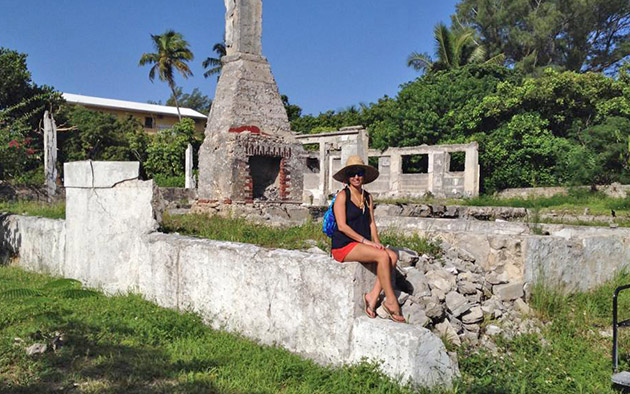 Maureen Mascaro: My fishing bucket list is pages long because I am still so new to the sport but I’ll confess my ultimate dream trip: I am a HUGE Earnest Hemmingway fan so I want to take a year sabbatical to trace Big Papa’s footsteps around the world starting in Key West with his cats and then to Cuba for a mixture of fishing and rum. Spain would be next – with the Bull Run in Pamplona and some fly fishing in its rivers. I’d then wine and dine my way through Italy before heading off to take down some big game on a safari in Africa. Then, I’d tempt a billfish slam on Kenya’s coasts. Ending the adventure in Paris, I’ll sit in cafés all day watching beautiful people walk by and write my own novels from the pages of my journals kept along the way. On the way home to South Florida, I’d make a stop in Bimini to meet with some friends, celebrate, fish and pay my respects to the legend himself at The Complete Angler. Who knows, maybe I’ll even open a tackle shop there! 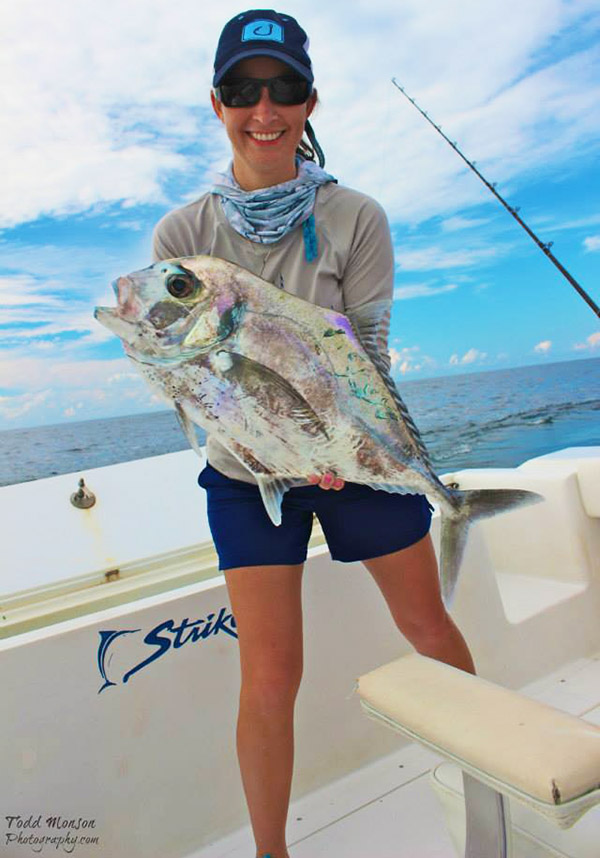 BD: What part of fishing do you like the most?

Maureen Mascaro: Maybe it is my overactive imagination but every day of fishing plays out like a story to me – the stories involve passion for a sport, goals, determination to reach them, friends and family that I love, sometimes adversaries and situations that are negative, as well as the drama of the sea and its turbulent weather patterns. I see it all as an adventure and I cherish the memories each and every time. 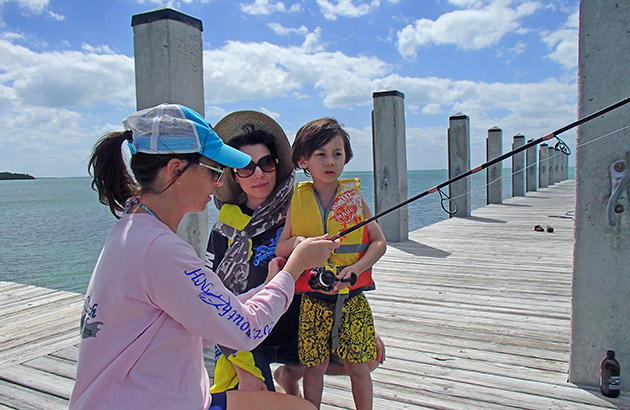 BD: Name some of your proudest moments in fishing, i.e.…catch highlights, tournaments etc.…

Maureen Mascaro: My proudest moment was when someone casually asked why it is important to understand the tides when fishing. I was able to answer her question without hesitating and that conversation led to one about moon phases and spawning times of various species. I don’t fish inshore very often so the tides aren’t that important to me – what this meant was that I had absorbed enough knowledge about the sport that I could actually hold an intelligent conversation and teach someone else what I knew. My mom coaches archery and I recognized her in myself during that moment. I realized how grateful I was that she instilled in me the desire to follow a passion without regard to what others think or say to discourage you. To live your own life and seek your own truth. To be brave in your endeavors even when you are intimidated or discouraged. To be independent and satisfy my own needs without apologizing. And mostly, to trust myself. 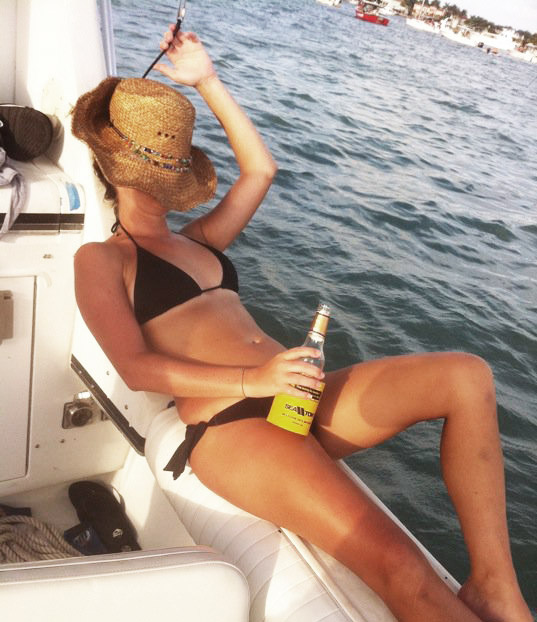 Maureen Mascaro: Not many people know this but reading and writing are a huge part of who I am. I would like to write a fictional novel series one day and as I develop the writing skills required I am working out the story lines – which obviously will certainly involve fishing. For now I have started a fishing blog called ‘She’s A Good Catch‘. You can find it on Facebook but I am also working on the website for 2015. I have shared some of my fishing adventures in the notes section and otherwise try to share pictures and interesting stories I find online, mostly just to have something to do when I can’t be on the water. I also started a fishing club with a few other women anglers called ‘Wishin We Were Fishin‘ It’s also on Facebook. We hope to evolve it into a group of more local women that meet in person monthly like a book club does and explore the sport in more depth together. 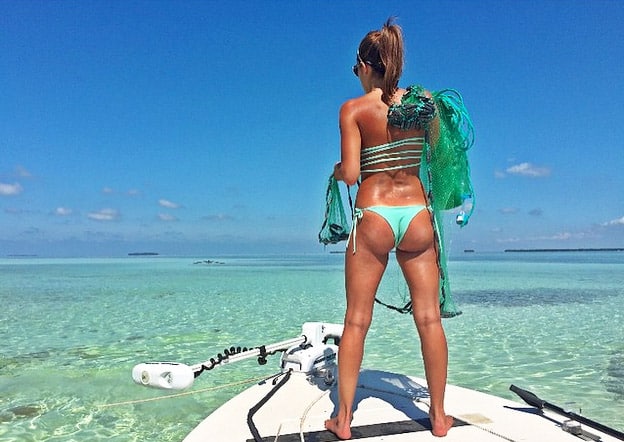 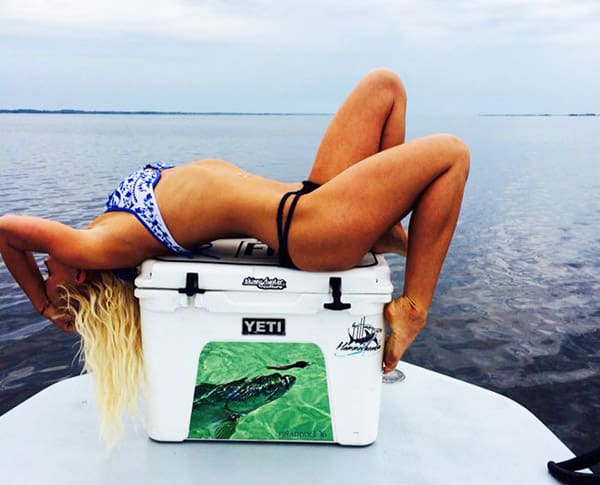 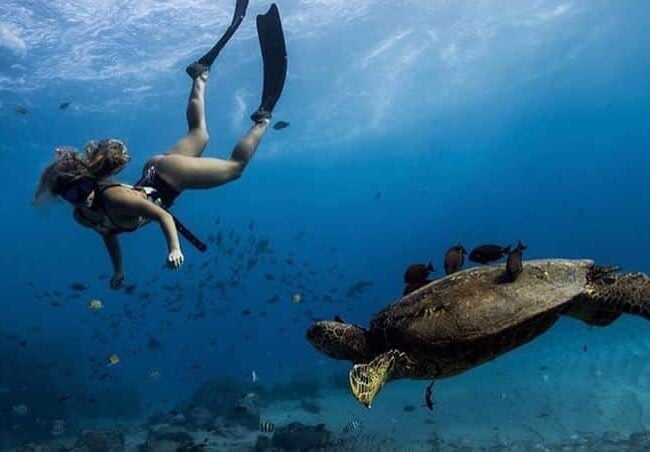 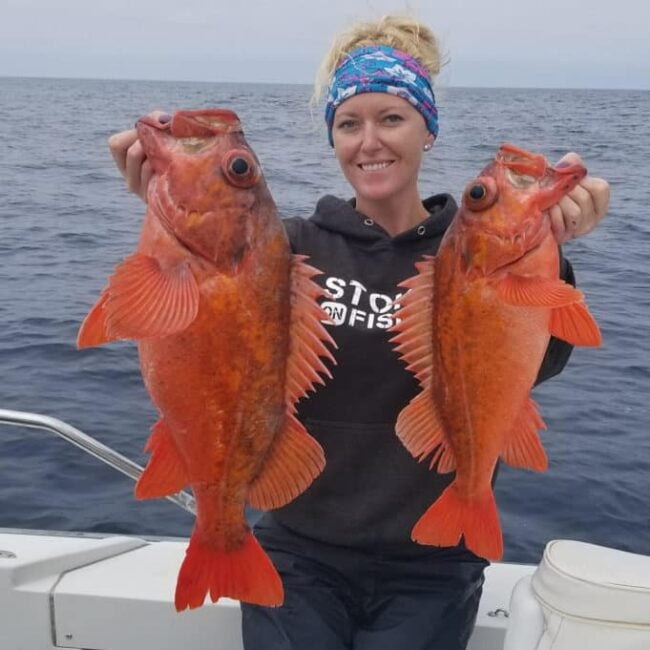 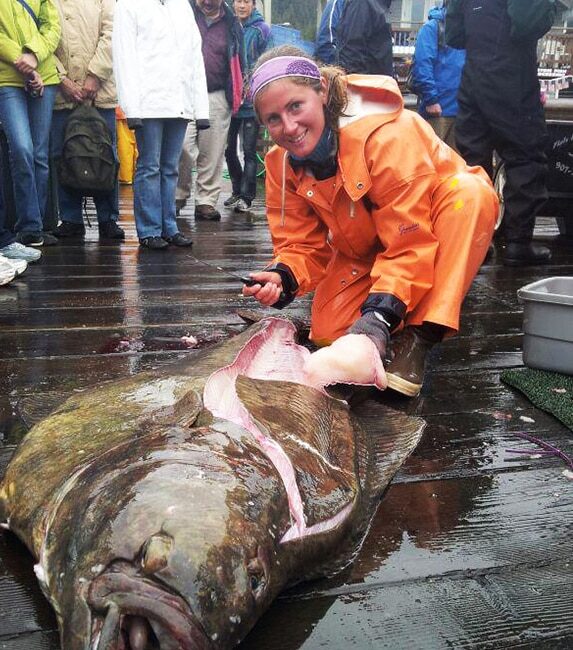