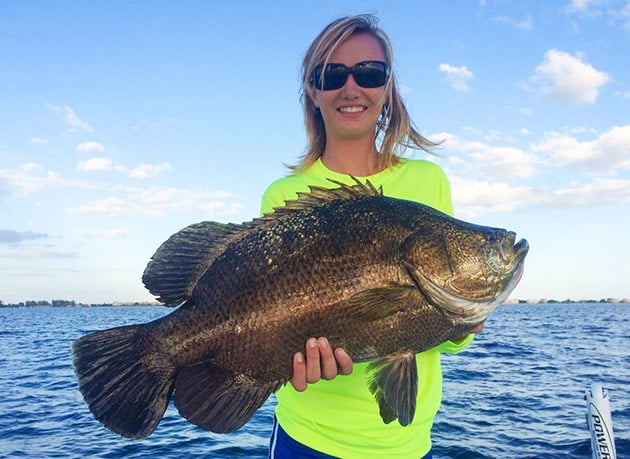 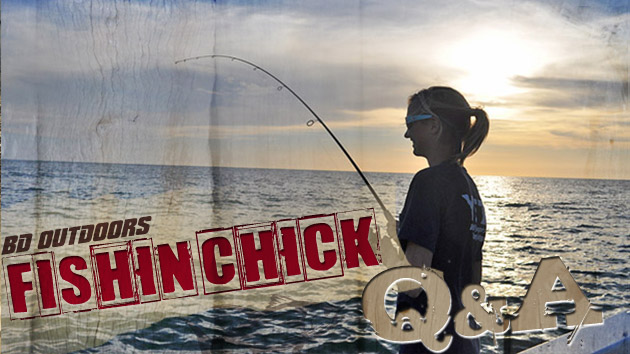 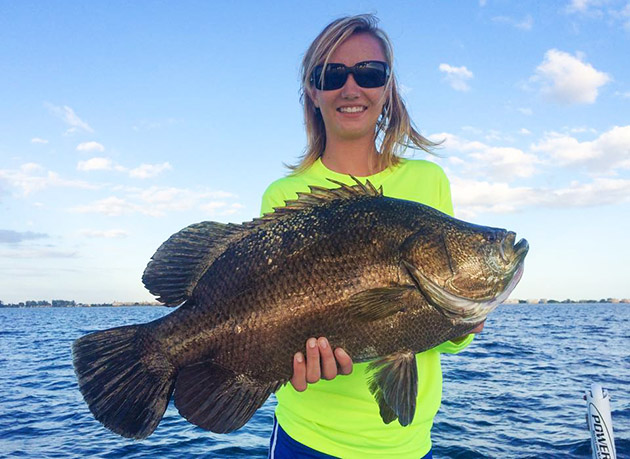 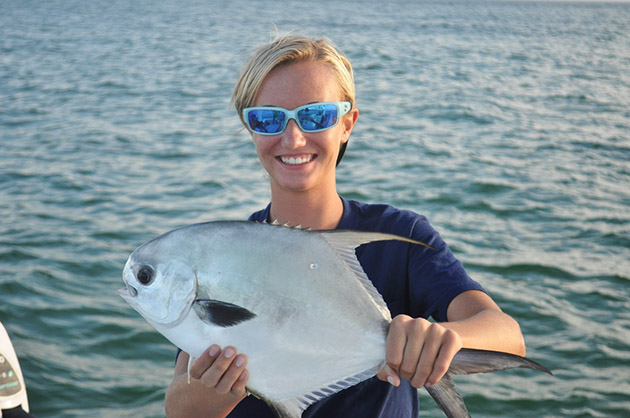 BD: What is you occupation?

Chasten Whitfield: I am a high school student 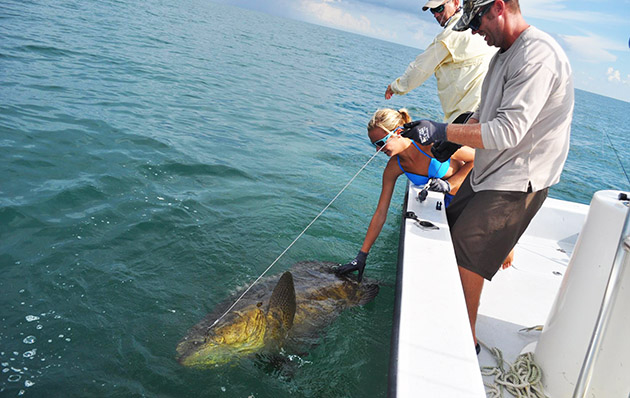 Chasten Whitfield: I am a high school cheerleader, a member of Reinaunce, and Key Club. I also travel around teaching kid’s fishing seminars. 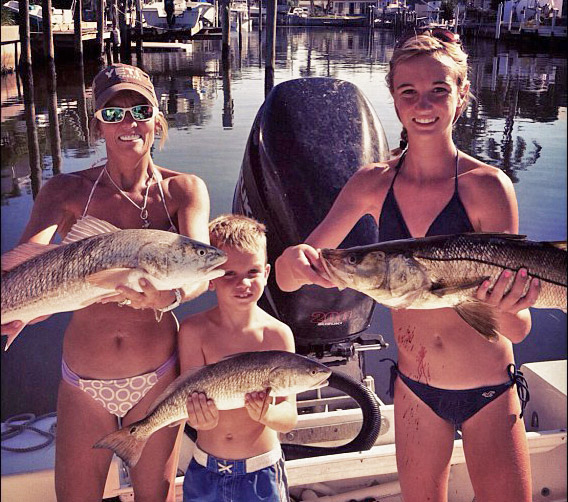 Chasten Whitfield: I started fishing with my family as a little kid. We would always fish just for fun. A few years ago some kids in school were making fun of me for being the only girl in our school who fished. I signed up to do my first local tournament, won first place in the ladies division and I have not stopped since. I have made it my mission to get more kids out fishing. 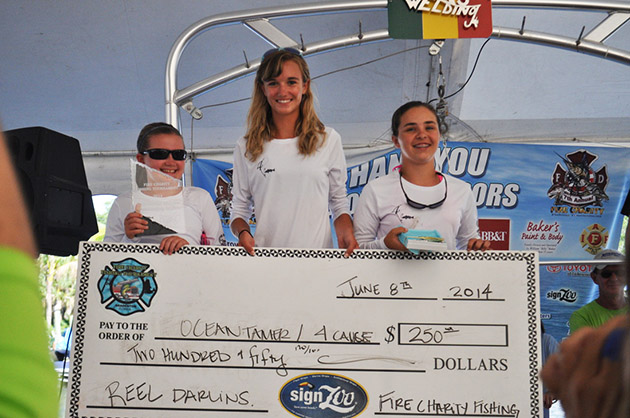 Chasten Whitfield: I have been fishing since I was 2 years old. However, fishing tournaments since 2013 but each tournament I win, I give my winnings to charity. I have always loved giving to charities and helping out kids who really need it. Each year since kindergarten, I have put on a garage sale and raised money for St Judes Children’s Research Hospital; as of 2012 we have raised $8000 for St Judes. This came full circle when my baby brother was born and was diagnosed with a tumor in his hand in 2010. St Judes helped us find a doctor who had experience with this rare surgery. You know they say when you give, you get back 10 times and I have seen that many times over. After giving to St Judes all of those years and then having to call St Judes asking for help was one of those times. 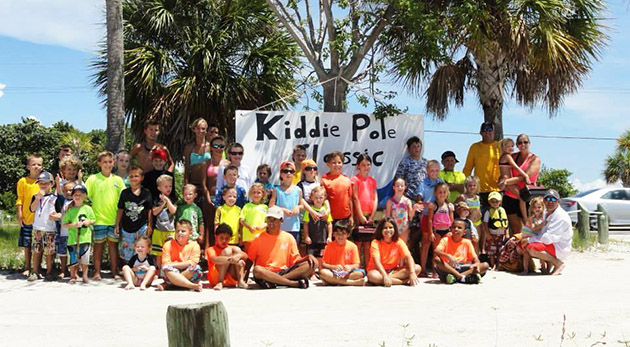 My captain-friend Chad Gamble and I put on a fun tournament called the Kiddie Pole Classic where you have to fish with those cartoon poles and last year alone we raised about $3600 for Face Autism. (The kids even came out to fish it, it was so much fun). 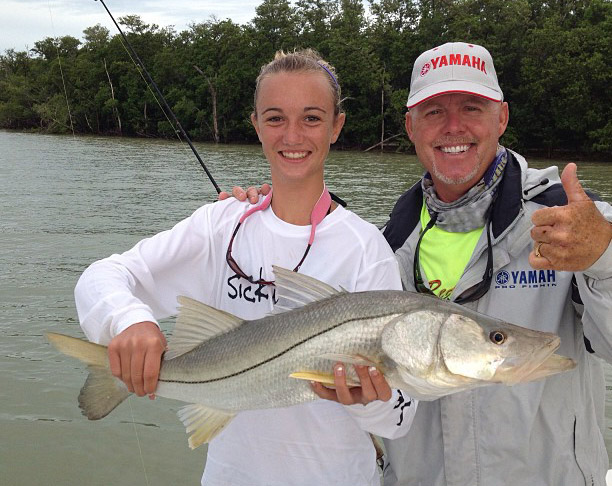 Chasten Whitfield: Lets see, Capt. Rick Murphy and I fished flamingo and caught some monster snook and my brother caught his first tarpon when he was seven. I fished out of Deerfield Beach with Mr. George Poveromo and caught my first mahi and sailfish. Those were incredible; we don’t have those types of fish over here on the west coast of Florida unless you go super far offshore. During my Spring Break I fished with Dream Catchers and caught the biggest tarpon EVER! And of course just outside my canal in September, we have huge redfish that pile up. We also have tarpon just outside along the beach in May. I don’t really have to go far during certain times of the year; we are very blessed with that. 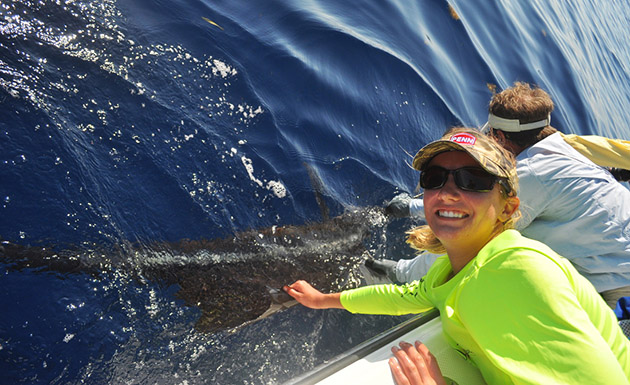 Chasten Whitfield: It would have to be sailfishing; probably because I don’t get to fish for them all the time. Fishing for sails with kites is completely different than anything I’ve done. And the way they tail walk is like watching a show. Its as if they know your not going to hurt them and they put on a show for you likes its their job. Well at least it was for me. 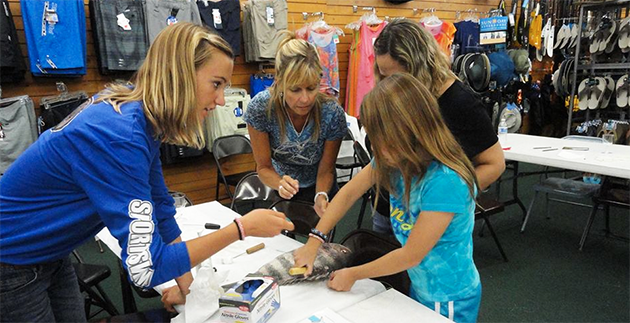 Chasten Whitfield: I have been traveling around the state of Florida every other weekend going to various tackle stores and helping kids of all ages (yes we have had adults come too) become more comfortable anglers, while teaching positive life skills, thoughtfulness and doing what is right. I am actively working with some tournaments to encourage the implementation of more junior and ladies’ divisions in their formats. I am also working with a few companies and together we are helping kids with disabilities that don’t normally or have never fished, to experience the thrill. One long-term goal, (which I hope isn’t too much longer) I want to eventually have my own fishing show for kids on TV. These adult shows don’t have many kids on camera. Think about it, if I have kids on TV and we are fishing, whether it’s wading, bridge-fishing, kayaking or in a skiff, wouldn’t that be fun to watch? Not to mention more parents would get their kids out to fish, meaning those kids are not inside watching TV, playing video games or glued to their phones. That would mean more parents would be going to tackle stores, which means tackle stores would be making more money, which make the fishing industry that much stronger! 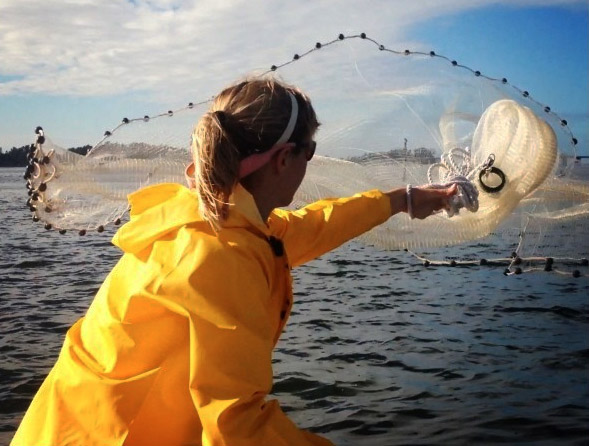 BD: What part of fishing do you like the most?

Chasten Whitfield: Fishing is my comfort zone. When life gets in the way I, go fishing. It’s quiet and you are one with Mother Nature. I know that sounds dorky but there is so much more to fishing than fishing. If you think about it, in life you can do many things. But in 2013 I was told I shouldn’t, couldn’t or would suck at fishing merely because I was a girl. That next week I went to a cotillion dance and there was a large boy that most of the girls were laughing at. I watched him as he approached girls and they would giggle or laugh. I felt bad because you could tell he was so nervous, but when it came his time to dance, he could really dance. He danced better than the skinny, more popular boys. At that point I realized I am that kid. I am a young, school-aged girl entering into a “mostly male dominated sport”. But I can reel in a fish just like any male can. I can throw a net just like any boy can. That’s when I said, I am going to take this fishing higher because how many other girls out there want to fish or hunt but won’t because they don’t “look the part”. It doesn’t matter what you look like; BELIEVE ME. I have done some amazing things these past two years. 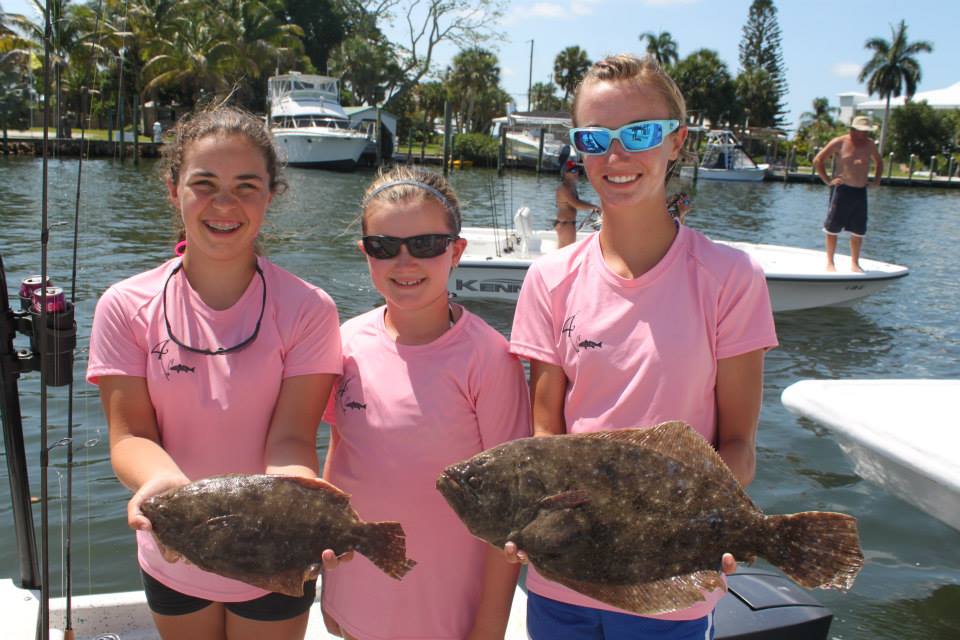 BD: What are some of your proudest moments in fishing?

Chasten Whitfield: Tournaments are funny, maybe it’s because I am so much younger than most people participating in them, or maybe it’s just because I don’t do them for the “title”, “bragging rights” or the “money”. If I win, I give the money to kids that can’t fish. Fishing is just fun for me. 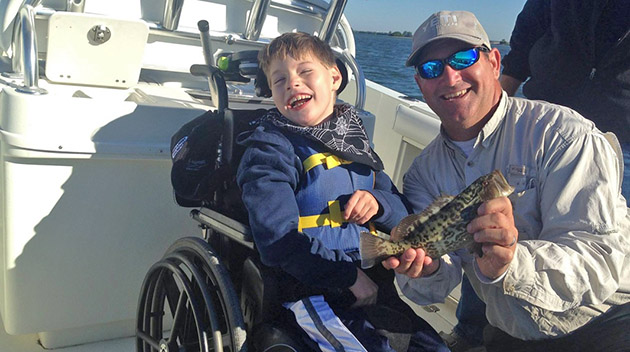 So I would say I have two highlights:

#2– When I get emails from kids saying, “Thank you so much. I have always wanted to hunt but none of my other friends were doing it. Watching you encouraged me to hunt.” Then there are the emails from a Dad saying, “Thank you; my daughter was to the point of hurting herself because her friends were bringing her down, but she follows you and you have encouraged her to be herself and stand up for herself. She loves following you.”

I have no words for how those emails make me feel. Those are my trophies!! 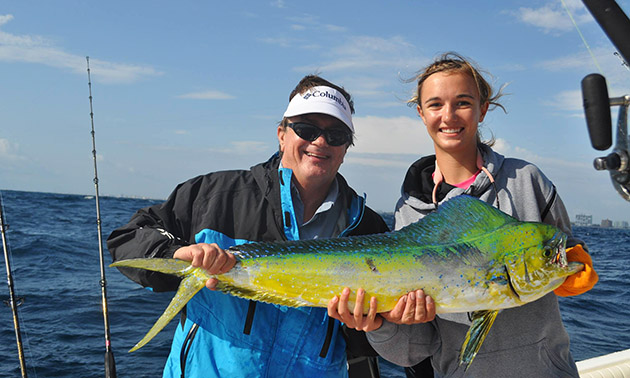 Chasten Whitfield: I never liked talking about myself, it always seemed like I was bragging and that is not the case, there is just so much I have experienced in the past two years, I have not asked anyone for anything, with the exception of advice. 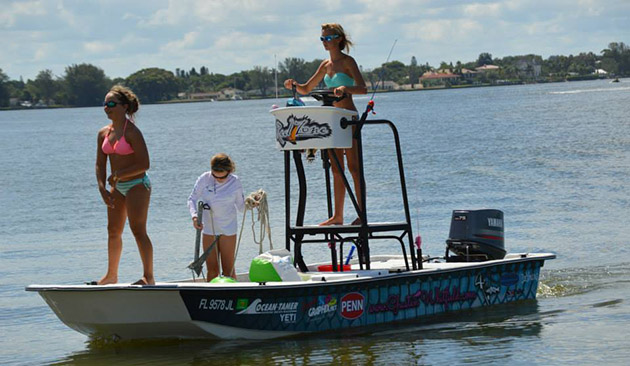 I had my own boat at 13 and it was wrapped and donated by my sponsor and an artist who donated the artwork to wrap it. I am an editor for Coastal Angler Magazine and I travel around teaching kids’ fishing seminars with Florida Sportsman, Reel Time, and Florida Sportsman TV Show with George Gozdz. 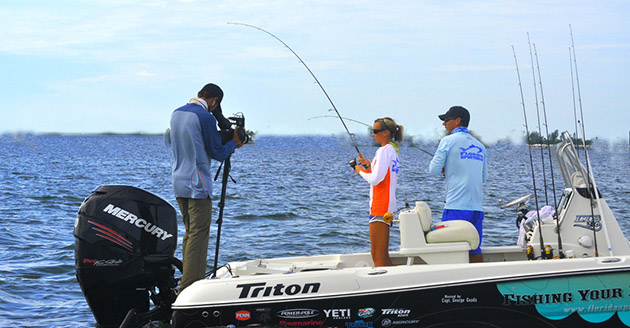 We did a show that will air in April 2015. There is a village of captains, friends and charities I help and who stand behind me, they help me take kids who can’t fish fishing, or when I just need advice. I have fished with some of the most famous and knowledgeable men in the fishing industry, but did not fish with them because there are famous.

At the end of the day it’s not about what you did with who, it’s about why you do the things you do that matter.

I did all of these things not to be like them but to learn from them. From there I pass on knowledge to other kids, whether it be fishing knowledge or advice on struggles in their lives. 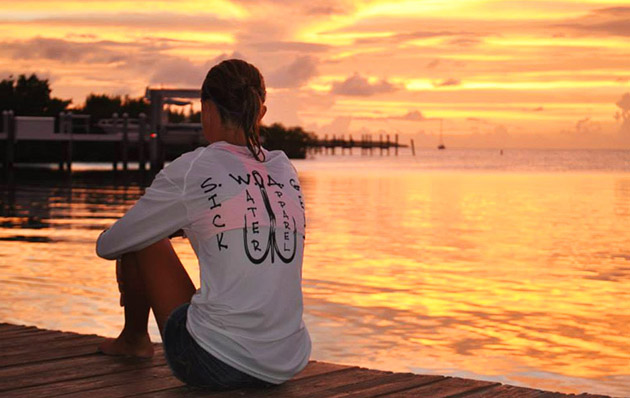 Here is my motto I try to live by:

As you grow older you learn that you have two hands, One for you and one for helping others.

BD gives thanks to Chasten for sharing with us and setting a shining example for young and old alike.

You can follow and get involved with Chasten’s work and adventures on her website: ChastenWhitfield.com and Fishing4Acause.