Which fishing boat hull design is the best choice, for you? 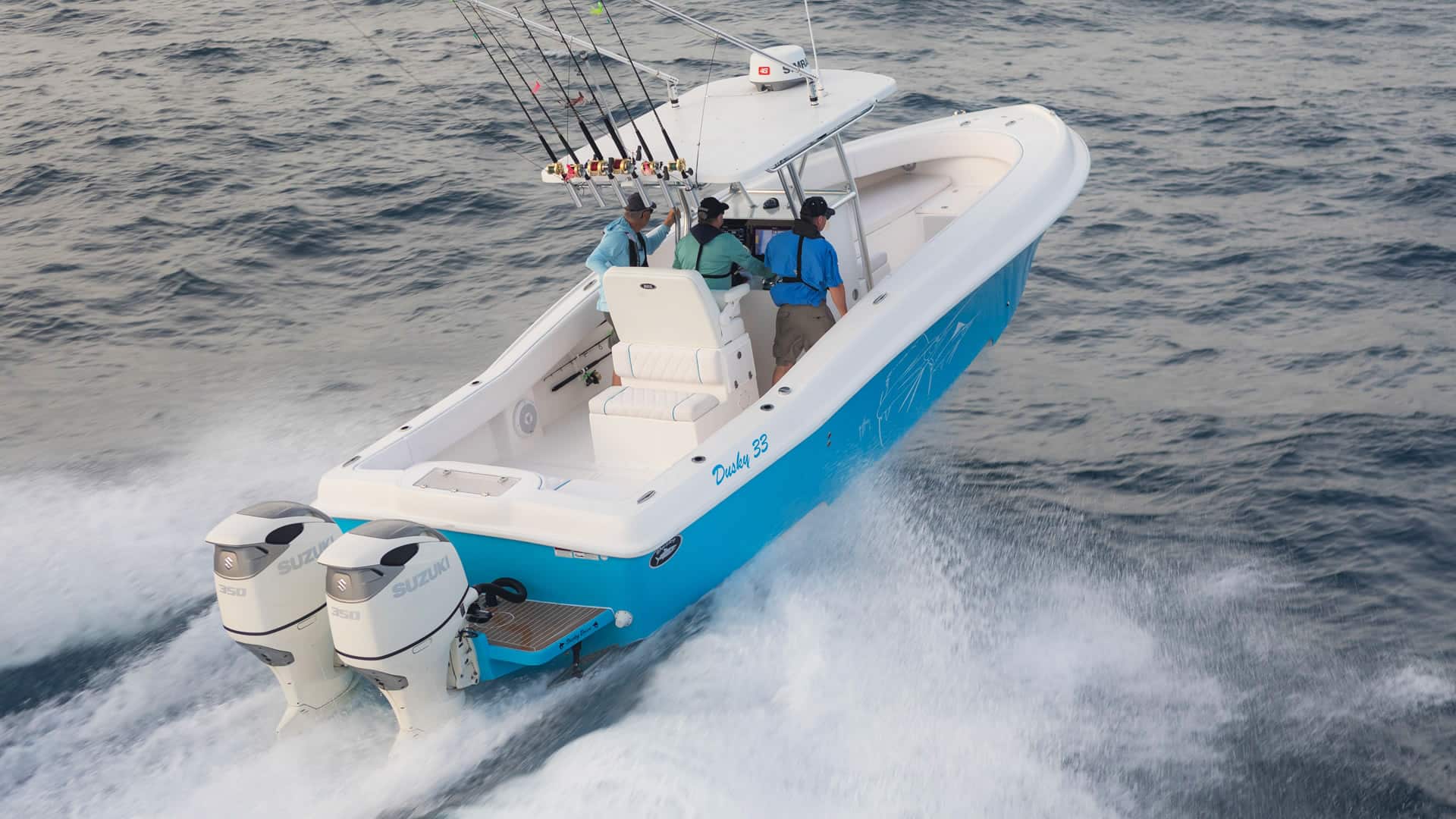 There’s no such thing as the “perfect” fishing boat hull design since we all have different priorities, but whether you’re interested in anything from finding the best center console for your needs, to choosing among different convertible fishing boats, having a firm grasp on the different aspects of hull designs and how they affect a boat’s performance and comfort is incredibly important. Just in case you’re not an old salt who already understands the difference between transom deadrise and variable-degree deadrise, knows exactly how steps work, and comprehends why a powercat has so many great advantages and so many not-so-great quirks, here’s a basic break-down of the most important hull terminology and designs to know.

Transom Deadrise is the amount of “V” in the hull, measured at the transom. In a nutshell, all other things being equal more deadrise generally equates to a smoother ride through rough seas at high speeds. But as deadrise goes up so does rocking and rolling, because the more V a hull has the more rocking and rolling it can be expected to do. Deeper V designs also tend to be a bit less efficient than shallower Vs, are impacted more by variations in weight, and have deeper drafts. Hulls with 21 to 24-degrees of deadrise are generally considered deep-Vs, those with 10 or 12 to 20-degrees are semi-Vs, and those with less deadrise are moderate-Vs.

As a general rule of thumb, boats designed for long offshore runs in snotty weather will be deep Vs. Those more inclined towards use in calmer waters or for shallow-water fishing will have less V. And the smaller a boat is the less able it is to accommodate for stability and weight-bearing issues, so boats under 20-feet can rarely carry a deep V and very small boats are usually flat-bottom or have minimal deadrise in the hull.

Variable-degree Deadrise is the term used to describe hulls that have a V shape which transitions through different angles, from bow to stern. Transom deadrise is still measured all the way aft, but a boat with this design might have 20-degrees of transom deadrise, more like 30-degrees amidships, and even more at the entry.

Hull Steps are abrupt changes in the depth of the hull, which is deeper on the front of the step and shallower behind it. Notches in the hullsides at the bases of the step allows air to flow under the boat. As the boat moves forward an area of low pressure is created behind the step, air gets sucked into the area of low pressure via the notches, and forms an air pocket behind the step. As a result, wetted surface is reduced. This accordingly reduces drag, which boosts speed and efficiency. When properly designed they can provide excellent performance, with gains in speed and efficiency of up to 15-percent. But in some cases they degrade pre-planing efficiency a bit, and when poorly designed they can cause unpredictable handling. To gain a fuller understanding of stepped hulls be sure to read Stepped Hulls – Is a Stepped Hull Boat The Right Choice For You?

Flare is the widening of the bow well above the waterline, to knock down spray. There’s no real down-side to having flare, except perhaps increasing the boat’s footprint without increasing its interior volume very much. People can argue about how it affects looks, too, but of course that’s purely subjective.

Compression Tunnels may be found on powercats, with a tunnel that grows narrower moving aft, and is designed to compress air as the boat moves forward. This creates a cushion of compressed air that softens the blows as the boat hits waves. But powercats can be quirky, and have a lot of unusual traits that go along with their smooth rides and unusual looks. Check out Power Catamarans – The Good, The Bad, and The Ugly, to learn more about these designs in specific.

Prop Pockets may be designed into inboard boats to reduce draft, and apply mostly to large twin diesel rigs. They can reduce draft significantly and, in some cases, decrease shaft angle, but in some other cases they may reduce efficiency a hair.

Chines are the angles and/or flat surfaces at the edge of the hull’s running surface. Each different type has its own properties (hard chines can enhance stability and planning but may also enhance pounding; reverse chines are said to knock down more spray; rounded chines reduce pounding but enhance stability less; etcetera).

Tri-Hulls and Cathedral Hulls fell out of favor decades ago, and don’t get talked about much anymore. They have a center V flanked by smaller Vs on either side, usually with a rounded surface between them. Tri-hulls offer magnificent stability on small boats, and do just fine in a small chop, but can pound excessively when slamming larger waves. There’s been a bit of a revival of similar designs in the past few years, including boats like Bayliner’s Element series and the Mako Pro Skiff, though these builders have come up with more marketable names like “M-Hull,” and “Inverted V.” We do want to note, however, that these are both rather unique hullforms and shouldn’t necessarily be shoe-horned into any specific design class.

Now, here’s the tricky part: each of these design traits and how they’re applied to a boat has an impact on one another, and designers are constantly striving to find the “perfect” mix. Which, of course, doesn’t exist anyway. Because what makes a boat perfect for you doesn’t necessarily make it perfect for me.

The only way to tell if any one boat best meets your needs is to go for a sea trial – or several sea trials – to get a real-world feel for how it performs.