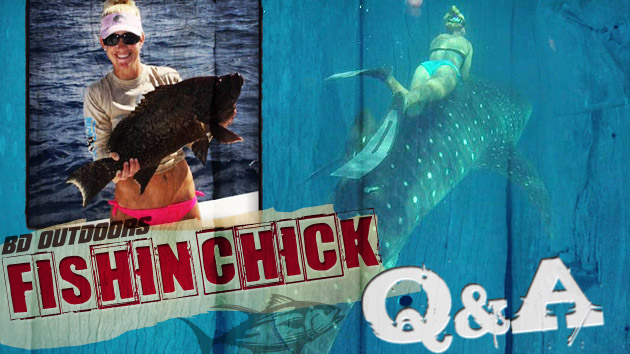 This month’s Fishin’ Chick, Monique Savoy, grew up fishing in the Gulf of Mexico and has turned her passion for the sport into a career. She recently got her six-pack captain’s license and currently works for the

Louisiana Department of Wildlife and Fisheries. Monique prefers to fish way out in the Gulf with her beau Eric Newman and target pelagic species, but she loves to catch anything that will pull.

Q: How did you get into fishing?

A: I was born and raised in New Orleans, Louisiana, and as many of you may know, southern Louisiana has some of the most versatile fishing in the United States. It was kind of hard not to enjoy the sport. I grew up fishing with my parents, mainly inshore for trout and reds and the occasional offshore trip. By the age of 10 I started to grasp the concept of fishing and that it wasn’t all about spending the day in the boat playing in a bucket, chasing the shrimp. In the next few years my dad took me under his wing and starting teaching me how to tie knots, bait hooks, clean the boat, drive the boat and back up the trailer. Dad was living the dream until 2010 when Eric Newman came along and introduced me to a new world of fishing. I recently acquired a job with the Louisiana Department of Wildlife and Fisheries and I’m part of a team that’s in charge of all offshore research projects. So this love has become a reel addiction for me.

Q: Do you mostly fish in the Gulf of Mexico?

A: All of my fishing is done in the Gulf of Mexico, mostly out of Venice, Louisiana. I’m spoiled because nowhere else in the world can you catch such a diverse group of species. You can catch everything from bass to marlin within a few mile radius of the Mississippi River mouth.

Q: Would you rather target inshore fish or go offshore?

A:I prefer the pelagics. To me it’s all about the challenge and the tougher the fight and the size of the fish, the bigger my smile. I enjoy being pushed to the limits, anyone can go out and real in trout after trout or deep-drop and press the up and down button all day, but it takes a special person to want to catch some of the toughest fighting fish in the Gulf and endure the pain that this fight involves. The adrenaline that goes through your body when the fish strikes, the reel zings and the fight starts is a love within itself.

Q: I hear that you can really hang with the boys when it comes to fishing. What’s your trick?

A: I’ve definitely acquired a spot as one of the guys. There is nothing a man can do that I can’t, besides bench press more than me (I’m also a personal trainer when time allows). I’ve learned to be a part of the team, so I tie knots, rig rods, drive the boat and learned to understand the proper water temperatures and currents when targeting specific species. I recently acquired my captain’s license because I wanted to expand my knowledge on running a boat. I also have thick skin. For some reason they like to throw jokes my way — but I throw them right back!

Q: What is the coolest fishing trip you’ve ever been on?

A: When Larry Dahlberg came down to film his TV show “Hunt for Big Fish.” It was a great experience to fish with a man that has fished all over the world and listen to his stories. I caught a 220-pound yellowfin tuna while he was filming. He came down to do a show on Louisiana shrimp boat tuna and he got what he asked for. As we pulled up to the shrimp boat I started chumming and about 5 minutes into this two nice tuna come rolling by. We put out two ribbonfish and bam, HOOKED UP! Both reels were screaming as Larry and I harnessed up. It was the fight of my life and all while being filmed for a national TV show. This fished really tested my limits. I’m 140 pounds and pound-for-pound yellowfin tuna are the toughest fighting fish there is. The fight lasted a little more than an hour. Eric gaffed it and next thing I know the fish is sitting on my lap, posing for pictures.

Q: What else does a girl do for fun in Venice?

A: It takes a different kind of girl to enjoy all that Venice has to offer — hunting, fishing, and Eric’s wonderful meals. Town is two hours away, so once you’re in Venice you’re committed. My time in Venice is usually spent fishing or working on tackle and boats.

Q: To you, what’s the perfect day?

A: I would love to do it all — head offshore to catch wahoo, tuna, dolphin, and marlin, then do some deep-dropping for grouper and tilefish. Take a quick stop at the shallow rigs for red and mangrove snapper and amberjacks. And before we get back stop at the spillways in the Mississippi River for speckled trout and redfish. But I would settle for just heading offshore — really far offshore — like 70-plus miles. There’s something special about cruising along with the smell of the saltwater, good tunes playing, and the anticipation of what is soon to come. Each and every offshore trip is so different. Any day on the water in general is better than being at the dock.

Q: If you could plan any fishing trip in the world, where would you want to go?

A: With Eric and the Bloodydeck guys to Nova Scotia to catch bluefin tuna!

Q: Do you like to fish with other lady anglers, or would you rather go out with the boys?

A: I really haven’t had the chance to fish with any other lady anglers besides my mom, but if it ever presented itself I’m sure me and the girls could really give the guys a run for their money!

A: July 4th, 2011 I got to fight the biggest fish of my career thus far. I was fishing a tournament out of Fourchon, Louisiana, on the Blueline captained by Dr. Bankston from Baton Rouge. We left port on Thursday evening making our way out to Green Canyon. We fished there for two days. We were starting to make our way back in when we stopped at EW 308. We were trolling around the rig, pulling ballyhoo. We started to see something swimming in our baits. The fish hit the short bait and then went for the shotgun blue-and-white Ilander, my favorite bait to pull now. The reels start screaming and I harnessed up. About 10 minutes into the fight it became very clear to us what we had when the fish started greyhounding. “Its a BLUE!” everyone started screaming. The tournament win was in my hands. Out of eight guys on the boat they put this pressure on me, hooked up to my first blue marlin. The fish makes run after run, and I’m giving him all I got. With great captaining skills and coaching I got the fish to the boat in 20 minutes. But that’s not the end. Just as the fish is about to be leadered it decides to take one final dive 600 feet down. There was no turning his head, no slowing him down. I felt three tugs while he was diving. We later found that the marlin got tail wrapped and hit bottom. Now I have to crank this sucker in. The blue finally reaches the boat and we tried to revive it for 10 minutes, but no success. So we headed back to the dock to show off my big catch. The fish weighedd 323 pounds. Blueline ended up winning the tournament for best boat, best captain, and best angler — me!