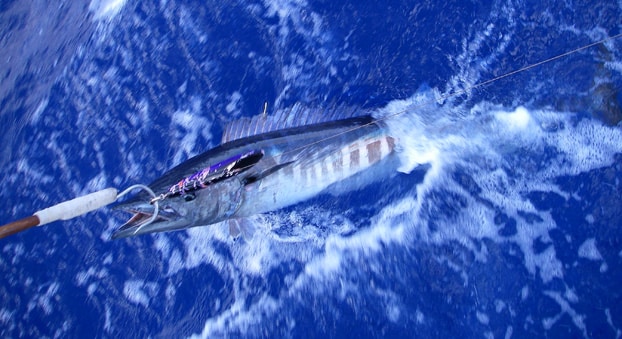 The first wahoo of the 2015 season was weighed in at the Balboa Angling Club on Saturday. The wahoo was caught by Mikko Monte along with his dad, Eric, who was the captain and gaff man. They were fishing aboard the Mas Tarde, a 37-foot Hatteras owned by grandfather Neal Monte, a long-time member of the BAC. Eric and Mikko were fishing the 17 Fathom Spot when the wahoo hit Mikko’s trolled lure at 10:00 am.  It took Mikko about twenty minutes to bring the wahoo to the gaff. The fish weighed 52.58-pounds and was caught on 50-pound tackle.

Wahoo are usually found in Mexico’s Sea of Cortez and off southern Baja California and barely ever migrate this far north, but with the warm waters of El Nino, we are having an abundance of bluefin, yellowfin, dorado and now the elusive wahoo! One of the last wahoo caught was on a BAC boat in September 2014, and that was believed to be the first genuine catch of a wahoo in the Eastern Pacific north of the U.S.-Mexico border. Previously, the farthest northern catch was 130 miles south of the border. Mikko’s wahoo, which measured 59 ¾-inches and had a girth of 24 ¼-inches, was weighed and photographed by Mindy Martin at the Balboa Angling Club scale in Newport Beach.

If you’re interested in joining the Balboa Angling Club, stop by the clubhouse located in Balboa just down the street from the Balboa Pavilion and next to Hill’s Boat Service at 200 “A” Street, or call 949.673.6316 or check out the website at www.balboaanglingclub.org.