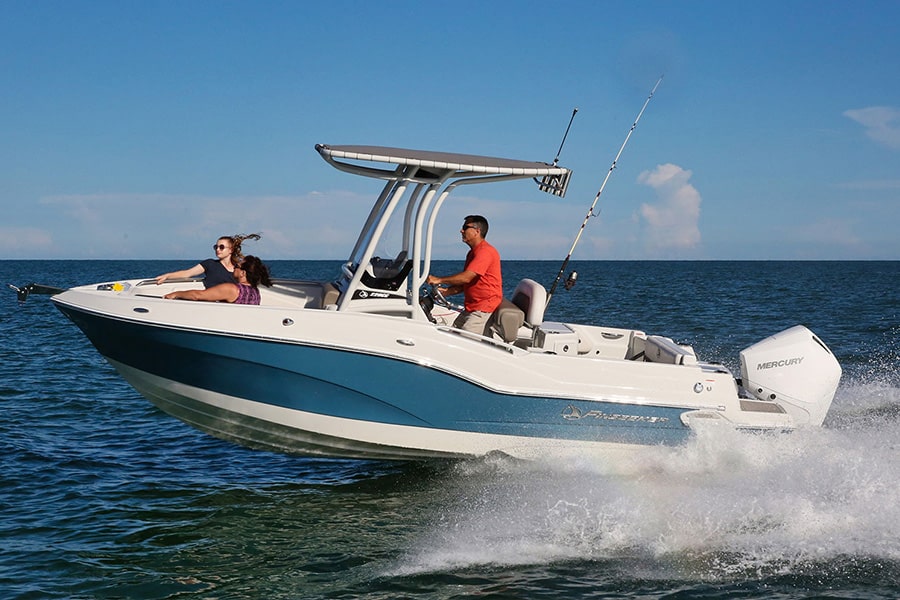 The Finseeker 220 represents fresh thought in a fishboat.

When a cruising boat manufacturer or a speedboat manufacturer decides to start building center console fishing boats, they often miss a few things. Or, they miss a lot of things. Like, um… livewells. So we approached the new Finseeker 220, created by Crownline, with a wary eye. But with curiosity, too, because Crownline has a well-earned reputation for building exceedingly nice runabouts and small cruisers. So if they lined up their ducks correctly, why not a fishing boat?

It’s clear that Crownline did their research, starting out with the inclusion of twin livewells. There’s one in the transom with a clear viewing port, and a second in the leaning post. Both are on the small side at 10- and 12.5-gallons, respectively, but truth be told this will be sufficient capacity for most inland and bay anglers. And the rest of that leaning post is totally kick-butt. Swing-out doors on either side hold a pair of slide-out tackleboxes, it sports four rocket launchers on the backrest, there’s a center stowage pocket for items like leader spools and pliers, and there’s a center aft drawer for bulk stowage. For a 22-footer, that’s an excellent use of the available space. Too bad there’s not also room for a slide-out cooler, right? Wrong. There’s a slide-out 65-quart Yeti hiding under there, too. 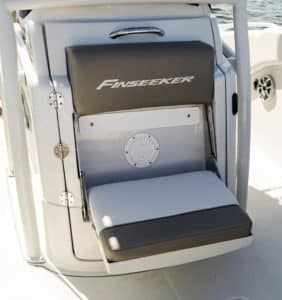 Still, it’s clear that the Crownline influence is felt throughout the boat. The standard-issue stereo system includes six-speakers, an IP67-rated Bluetooth Kicker head unit with USB/iPhone/iPod/Android ports, and a variable day/night dimmer on the full-color LCD display. Wow. Other family-ish/cruiser-ish features that carry over include a windlass, a freshwater transom shower, and of course the expected enclosed head compartment. Finseeker used a forward console entry that makes getting in and out easy – smart move. They also dedicate most of the bow to seating in a U-shaped bowrider-like fashion, including removable backrests and an optional removable table that you’ll want to be sure to leave in the garage on fishing trips.

A great feature from both the family and the angling points of view can be found in the front of the console. Rather than putting in the usual forward console seat, which eats even more into bow deck space, Finseeker’s designers pulled off a neat trick: a fold-down seat pops out of the console entry door. When it’s up and out of the way there’s no price to pay in the way of deck space, but when deployed, you still get that extra forward seating.

Despite the all-around smart design, we have one big beef on the fishing front: the optional rocket launchers on the hardtop are a clamp-on rack that simply doesn’t cut it. They’re lightly-built, flexible, and we wouldn’t trust ‘em with our rods and reels when running through any kind of significant seas. This is probably one of those oversights that can happen when cruising folks build their first fishing boats, and we’d bet that Finseeker hears the same from its dealers and customers and upgrades this item sooner rather than later.

One big perk of looking at a fishboat with Crownline DNA is that you know it’ll perform. And while we couldn’t take the 220 off the dock when we first found it at the Annapolis boat Show, early reports put top-end in the mid-40s and cruising speed in the low- to mid-30s. That’s pretty spiffy, for a 22-footer running on a single 225-horse Mercury FourStroke V-6.  And considering the hefty 105-gallon fuel capacity, it also means this boat will have long legs; range can be expected to exceed 300 miles through much of the powerband and should be well over 200 miles throughout.

A few other unexpected perks: a trailer is included in the approximate $120K (fully rigged and ready for action) price tag, a rarity on a boat of this size. Another nice standard is a pair – not one, but a pair – of 7” Garmin EchoMap 12X MFDs at the helm (upgradable to 12-inches). And the cockpit sports toe rails, a raw water washdown, and a pair of macerated fishboxes in the deck. That’s all stuff we fish-heads appreciate, and that your average bowrider builder probably wouldn’t have considered. So, yeah, a Crownline fishing boat. Who woulda thunk it?