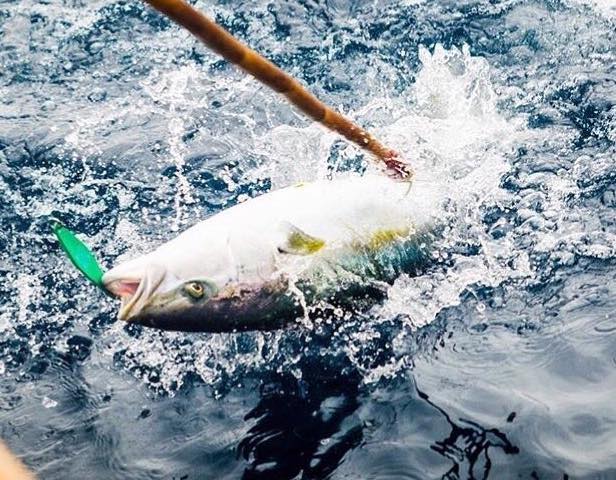 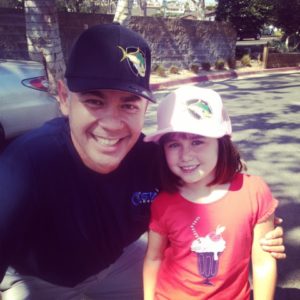 Fathers Day Weekend Fishing Edition: My daughter asked me what I wanted for Fathers Day. “I just want to spend time with you.”  And maybe fish a little.  I’m hoping I can talk her into a halfie or some time at the beach.

For the rest of our angling community, I really like the prospects of getting out this weekend. Lots of species are out there biting…bluefin, yellowtail, white seabass…all of them and more are in play.  What’s your flavor?  Where are you willing to drive to?  How much time do you have? 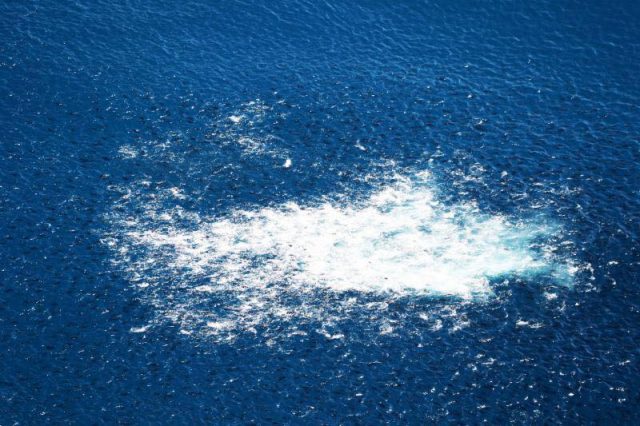 The SAC plane was up this week and it spotted a lot of fish out there (above).  Some fish were actually willing to cooperate and sportboats were able to capitalize.  The fish being caught are literally from 20-200-pounds, so they do present problems when planning on what gear to bring.

At the lighter side of the spectrum, Capt. Gavin Harbour of the Pacific Queen got his passengers onto limits of that 20-30-pound grade of fish on Wednesday.  They were on a day and a half trip returning Thursday morning. Sounds like it wasn’t that frustrating, light line deal either as he reported they bit well on 30# with the flyline sardine.  If it was me, I’d still have some 20# (maybe 15 too?) fluorocarbon in the bag, they are bluefin after all. 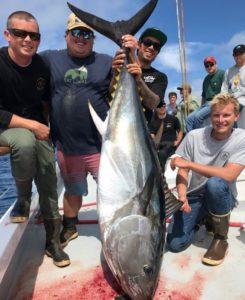 Capt. Adam Williams of the New Lo An found some of that smaller grade of fish early in his day yesterday. They were on an overnight trip and got 8 of them.

Then they ran into a school of the bigger fish, managed to hook one and battled it for nearly 2 hours.  Adam reported that angler Reed Perkins (right) successfully landed the first “local” sportboat cow of 2018 on a flatfall, fishing 100# Blackwater fluoro.  The fish ended up weighing out at 201.4 at Point Loma Sportfishing. Congrats to all involved.

Lots of spots available as of this writing across several of the San Diego boats.  Bring your light to heavy gear and everything in between.  There was even a popper fish this week, so go nuts.

We’re in that golden seabass window still of 3 days before or after the new or full moon.  The new moon happened on Wednesday.  True to form, they bit pretty well this week.  The action has been centered up north at the Oxnard and Ventura landings, but there have been some surprise catches along the whole coast.

Tuesday, those MDR boys chartered the Aloha Spirit and Capt. Shawn Steward gave them a day to remember (below). They got 16 white seabass and added 100 yellows to go with some bass, bonita and barracuda to round out their day! 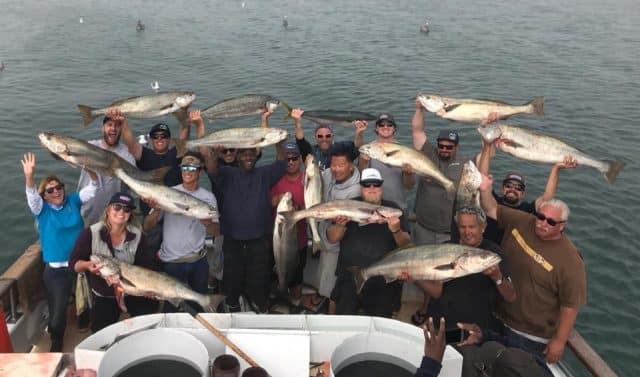 The interesting thing this year is the lack of squid up there. Make sure to bring an anchovy setup.  The secret bait has been red crab pattern tube baits.  Kind of a run on them up there, so buy beforehand if you’re going to make the trip up.  The limit goes to 3 fish tomorrow, so it’ll be tougher to find a ride this weekend than it is on the bluefin.  Jump on it right away.  If you can’t get on, I’d look ahead to the full moon and book your spot now.

Yellowtail are getting caught everywhere. It was really good this week for the San Diego full day boats fishing the Coronado Islands.  Boats fishing Catalina and Clemente got into them this week, and they’re biting up north as previously mentioned.

Bottom-line, it’s a great weekend to be fishing so get out and enjoy it. Good luck if you get out there.

Get lots more from Joe Sarmiento on BD.