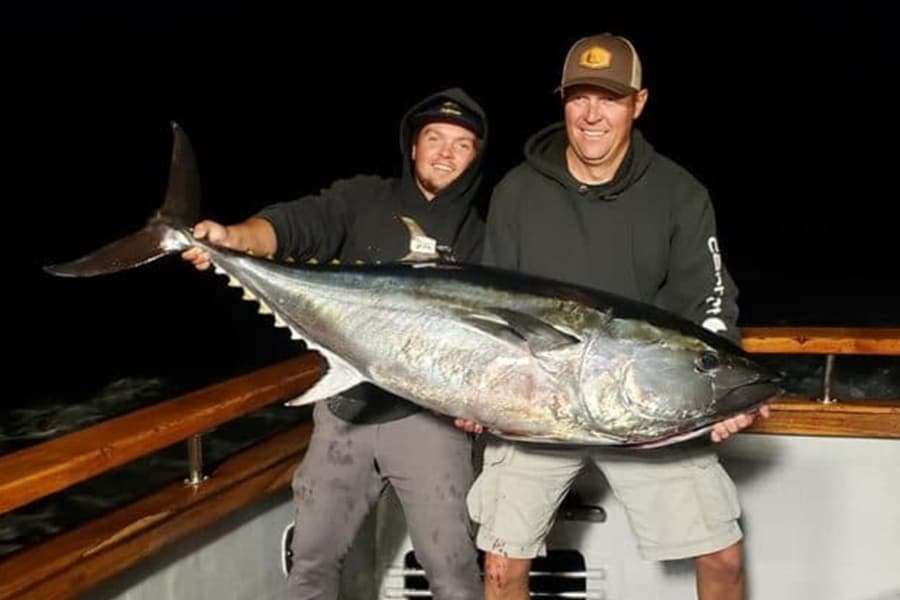 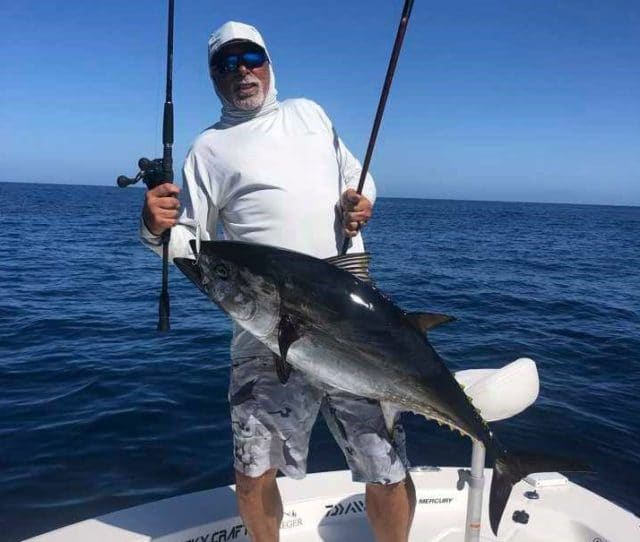 I know that I keep saying the same thing over and over but it’s been yet another good week of fishing in Southern California. We had a little bit of weather earlier this week that kept the private boats away from the big bluefin grounds off the backside of Clemente but the sportboats that weathered the storm did catch fish. If enforced, the island’s naval closures this weekend are basically going to close the entire bite zone down but we’ll have to wait and see what happens. Overall the bite out there has been down since the wind blew but these bluefin don’t seem to mind cold or dirty water so I’d imagine the bite will improve again as we go into the full moon on the 13th. 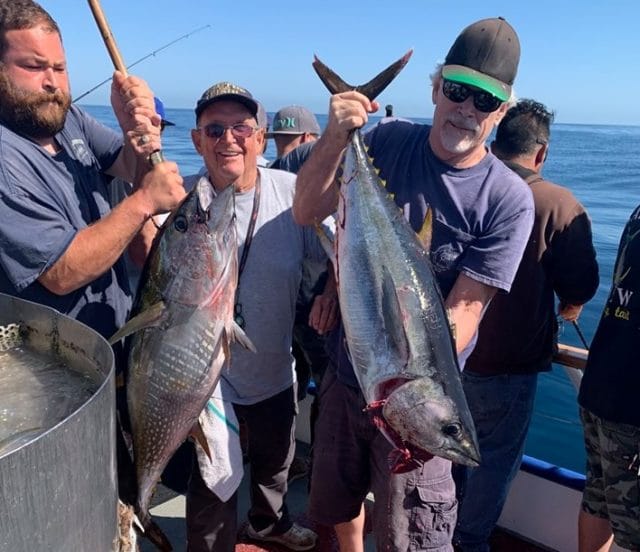 In the meantime, the yellowfin have started biting off the east end of Catalina again. These fish have been there for a couple of weeks now but have been more miss than hit. On Wednesday there were enough cooperative fish around that the Freelance out of Davey’s Locker was able to score a couple on their way home from fishing the island. Captain Justin Reynolds was also out in the zone on Wednesday and one of his clients hooked a yellowfin while fishing a small hardbait on light gear. Two hours later they landed a 48-pound yellowfin. In other “big fish on the wrong gear” news, Captain Gerry Mahieu fished on Wednesday and cast a small lure into a school of 15-20-pound yellowfin and hooked a 50-pound bluefin. After quite the battle he landed the fish in the photo at the top of this article. I’m not sure if the tuna off Catalina will bite this weekend, but I do know that they’ve been holding in the same general area for at least two weeks, so if you find signs of non-tuna life anywhere off the east end, I’d make it a point to give it another check on the late morning or afternoon slack tide. I’m not going to talk about the swordfish that are still biting except to congratulate my friend Bob Hoose, who after several years of trying, caught his first deep drop fish this week. It was long overdue. 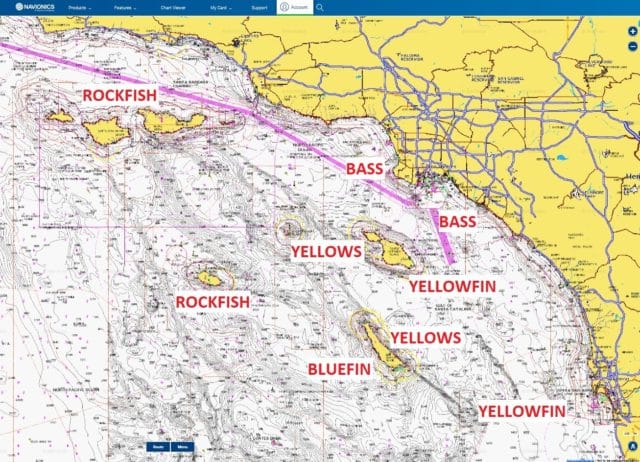 This week’s Navionics Chart shows the highlights of what’s happening across the Southern California bight. There are still some yellowtail being caught at the Channel Islands, but rockfishing is the name of the game for most boats. It looks like we’ve got some great weather in the forecast up there this weekend so if you’re looking to fill the freezer, now is a good time to do it.

The rockfish, halibut, and yellows are still biting at San Nic and my crazy buddy Brandon Vulgamott continues to risk life and limb to head out there. At less than 90 miles from the launch ramp, it may seem like an easy run in your own boat, but if the weather forecast is wrong you’re going to be in big trouble (yes Brandon, I’m warning you. Again.). Crazy private boaters aside, if there are any sport boats with San Nic trips online this weekend, it would probably make for a fun and productive trip. 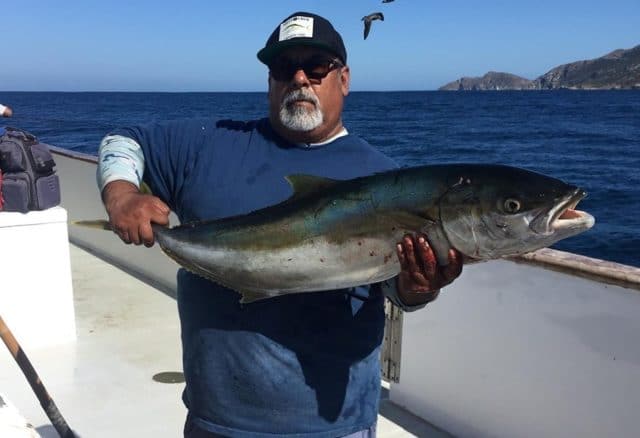 There are still some yellows biting at San Clemente Island but between the naval closures and the big bluefin biting at the island, they haven’t been getting much pressure. The big yellows at Catalina are still biting pretty well for the 3/4-day boats. As is always the case, you’re much better off fishing on a weekday than a weekend at Catalina because it cuts down on the amount of private boater bad behavior you’ll have to deal with. Not only do weekdays make for less yelling but the fish seem to bite better when boats aren’t driving up, over or across your chum line every three to five minutes. 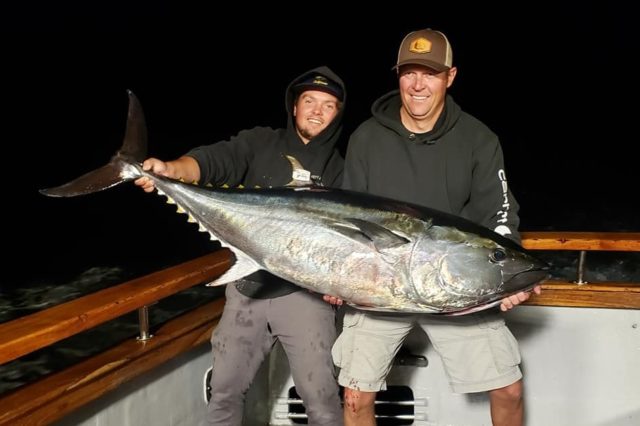 The bass are biting along the coast in most areas. I went out and fished the pipe on Saturday morning for a couple of hours with Jimmy Decker. The fish were top to bottom on the meter when we got there and they bit the crankbait wide open for a half-hour before the current quit and the bite ended. We ended up getting chased back into the harbor by a strong south wind shortly thereafter, but after a month of not catching any bass due to marlin tournaments, it felt great just to go out and be able to cast a lure with a reasonable expectation of getting a bite. Once Decker and I get our swordfish deep drop gear dialed in I’m looking forward to some bass/swordfish combo trips. It’s going to be nice to have something different to fish for if the bass bite quits because the current died on the pipe first thing in the morning.

Finally, the yellowfin and skipjack are still biting for boats fishing out of San Diego. These fish are still in the same basic zone as they’ve been the last couple months so if you’ve been out at all this summer, I recommend just driving right back to where you caught them last time as you’ll have a pretty good shot of them being there again. The yellowfin are mixed from 10-pounders up to 30-pounders with the occasional 50-pound fish thrown in, so be careful about throwing too light a line if the fish will bite something heavier. That’s about it for this week. Good luck if you’re going fishing!