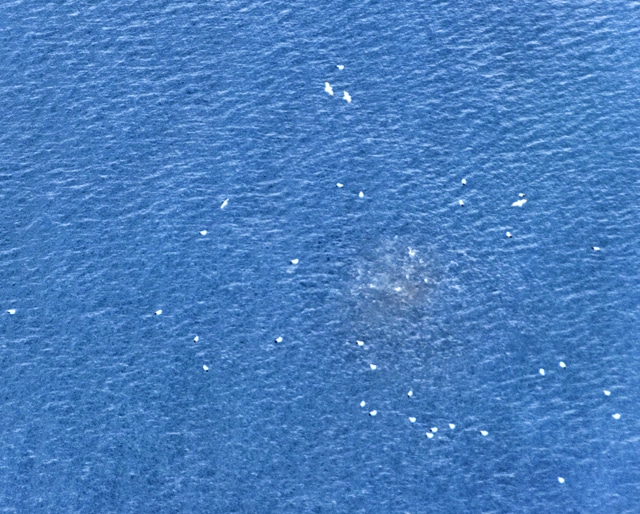 If you follow my WON Roadtrekker column, you’d have noted that I was to leave on May 30 for my annual drive down the peninsula, meeting the Sportfishing Association of California (SAC) team in Loreto on June 3 after stopping for a couple of interviews en route. In fact, I gave you my whole schedule for my trip.

However, when I received an invitation from Ken Franke, President of SAC to ride along with their pilot Tom Greene on one of his scheduled twice-weekly fish spotting trips, regardless of the schedule changes it required, I had no intention of missing out on the opportunity. So, after a few telephone calls and schedule adjustments, I was on board with the upcoming fish spotting trip.

Franke went on to explain that the volume of yellowfin and bluefin off the Southern California and Baja coast this year was extraordinary and according to Greene, there were huge schools spread out throughout the area, many with large fish upward of 200-pounds … and he had photos to prove it.

While I have flown in small aircraft throughout Baja many times, I had never flown specifically to search for fish. I was eager to tick that box. 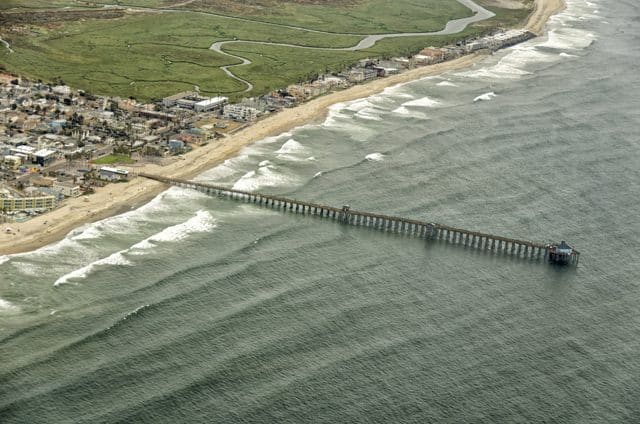 Tom and I met at Gillespie Field in El Cajon on May 30 and after the usual preflight instructions, we headed west over the Imperial Beach Pier. With the Coronado Islands in the foreground framed by the Pacific Ocean at an altitude of 800-feet, the view was stunning.

Greene acquired his pilot’s license in 1972, expressly to be a fish spotter for Southern California swordfish boats and eventually for seiners all the way down the West Coast of Baja. His experience is vast and his stories are entertaining. 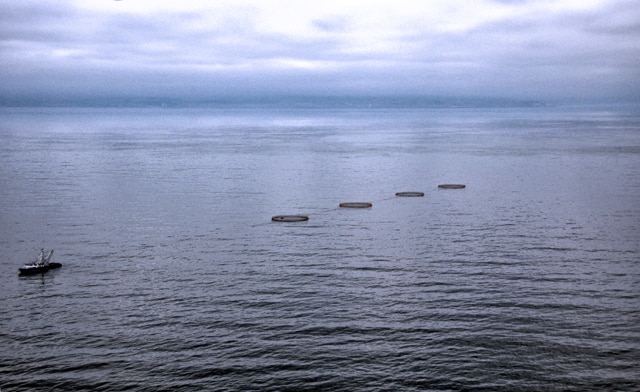 As we neared South Island, there were a large number of tuna pens, all of which were full, surrounded by support vessels. The Mexican fleet had already reached its quota by early May. 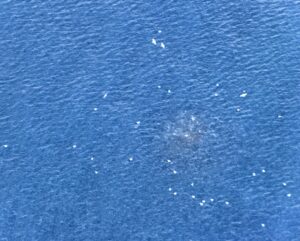 From there, we continued southwest toward the 425 Bank searching for birds, color spots, shiners and boilers. Regardless of the cloud cover, it wasn’t long before we were circling our first of many spottings that morning. 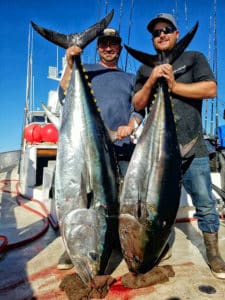 After reading Greene’s report, the San Diego out of Seaforth Landing in Mission Bay headed out Saturday to some numbers where large tuna had been spotted the day before. That was well within their three-quarter day range. For their effort they were rewarded with two trophy tuna weighing in at 177 and 125-pounds.

On our flight we saw several sport boats including the San Diego and Liberty. Another school of larger fish showed not far from the San Diego; heading our way, they were soon among the school with fish boiling around them as we continued on. 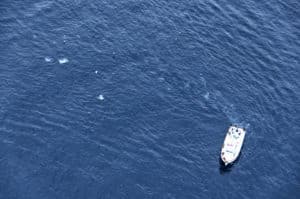 As sport boats, private yacht sportfishers and skiffs, along with trailer boats crisscrossed back forth beneath us, it was easy to appreciate our vantage point and our ability to find fish from horizon to horizon, while those on the water struggled to see muc 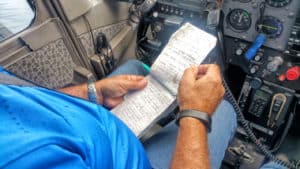 Throughout the flight, Greene constantly referred to his tattered notepad that contained notes carefully printed in pencil with notations of previous sightings and events while constantly scanning the water surface we flew over. When a spot appeared, he would slow the aircraft slightly and circle while verifying the size and quantity of the school. Then scribbling that info on his notepad, he would resume his course. 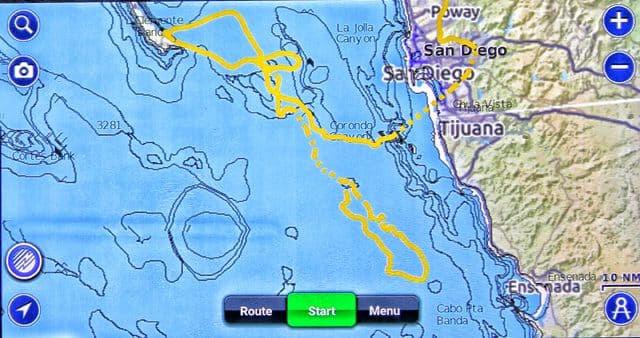 The cloud cover remained throughout the afternoon as we worked our way back up the line across the 43 Mile Bank towards San Clemente Island and we both continued to search for more signs of life or fish. Although the clouds didn’t hamper spotting the schools, it was not the best conditions for photographing.

Greene added that “the volume of tuna this year was remarkable.” Continuing, “The first tuna I spotted this year was on March 9; however, the seiner fleet wasn’t ready, the weather was inconsistent and it was several more weeks before the serious fishing for that fleet had begun.” 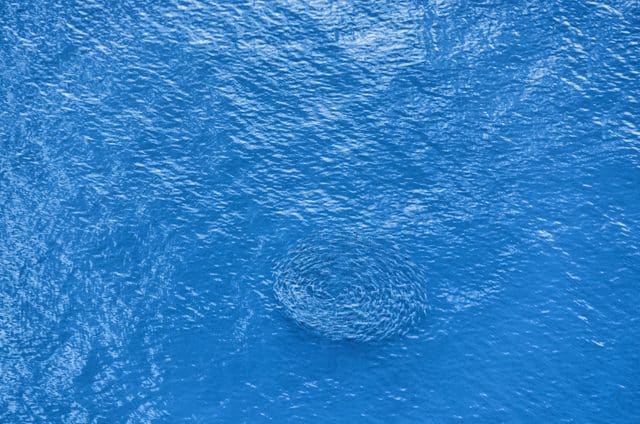 By mid-afternoon we were in the lee of San Clemente and Greene wanted to show me a huge school of large yellowtail he had seen on his last trip. Once again referring to his notes, he discovered the school had hardly moved. 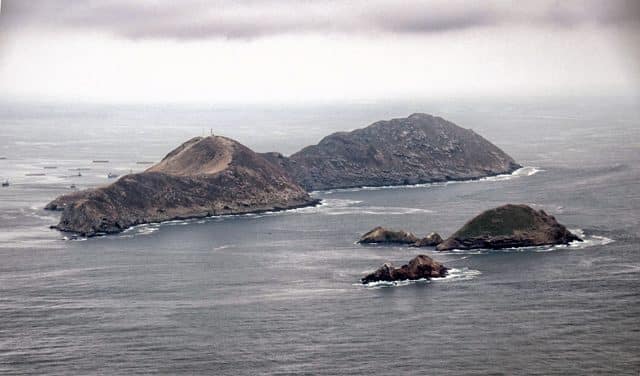 After several circles around the tightly balled-up school, he set a course toward the beach by way of the Coronado Islands, circling the North Island for a photo op before we headed for the Gillespie Field Airport in El Cajon.

Franke later said that when he and his Board of Directors had decided to recruit a spotter plane five years ago, its purpose was to enhance the ability of the 80+ member fleet of fully-equipped rigs operated by some of the most respected captains and crews in the world who had the latest technology available to allow them to locate fish quicker and stay on them longer. In addition, there were other unexpected advantages, not the least of which was the amount of time and money saved along with the huge amount of fuel conserved.

Captain Buzz Brizendine is a life-long fisherman who is well respected throughout the marine community. Owner of Prowler Sportfishing in San Diego, he is serving his second term as a member of the Pacific Fisheries Management Council as well an Executive Board Member of the Sportfishing Association of California. 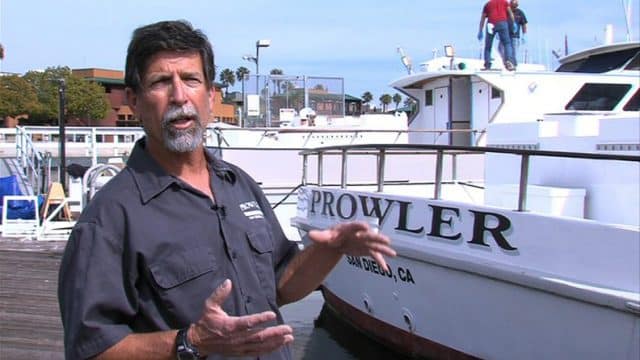 “What began as a tentative program five years ago has become a tremendous benefit for all of our members, allowing us to have up-to-date reliable information about our playing field,” Buzz offered.

“As an example, last Friday Greene flew and information he gathered on the areas holding fish was invaluable. The plane was up and he put out the different numbers. I decided to head directly to one of those positions and on Saturday morning when we arrived in the dark and stopped, we were on top of a huge school of bluefin.”

Franke added, “It’s hard to believe that it’s only June. The number of fish and the size that are being seen certainly is an encouraging sign of a banner season for our fleet this summer.”

I want to thank both Franke and Greene for a very educational and exciting detour to my usual Baja road trip. I learned a lot from Tom, and look forward to flying with him again in the future.

Franke and his pro-active board for SAC has made a difference in the field of sportfishing by seeking innovative ways to benefit its members and the sportfishing industry, reaching across international borders to assist tourism as well as sportfishing organizations throughout Baja and Mexico. The impact that SAC has had on them is remarkable and you can count on Franke and his team to continue to find unique solutions to the uncommon problems in the future.