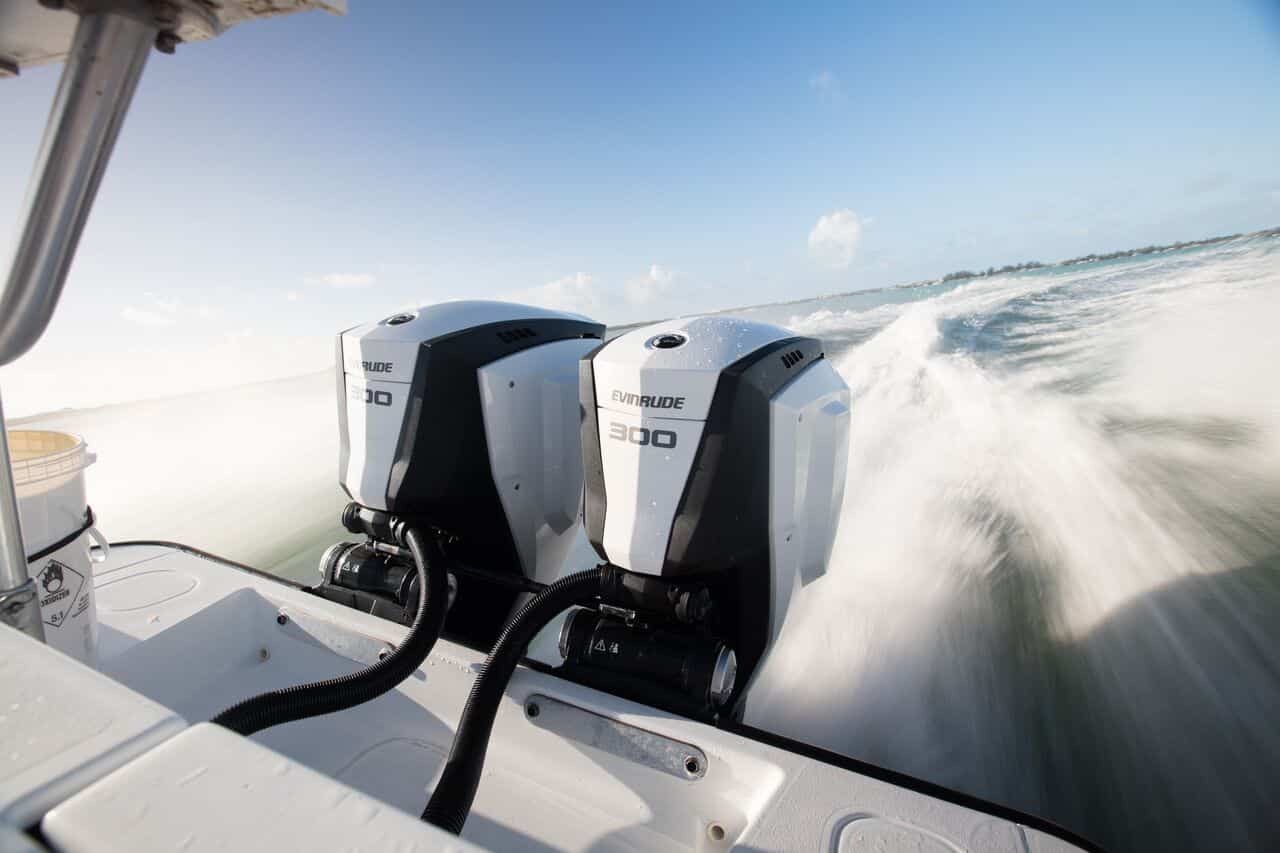 The Evinrude E-TEC line proves that two-stroke outboard engines still have a place on today’s ocean – in a big way.

There was a time when many outboard engine aficionados thought two-strokes might go the way of the dodo bird, but if you’ve been keeping up with the news lately you probably noticed that Evinrude E-TEC G2 outboards recently won top product honors from Boating Industry, and they just expanded the G2 horsepower range.

How has this one brand of modern two-stroke outboard survived and thrived, even as other manufacturers have turned entirely towards four-strokes? It all boils down to new tech.

When creating the G2 line, Evinrude took the old two-stroke playbook and tossed it right over the gunwales. Rather than redesigning or upgrading an old block they started with a fresh sheet of paper and created it from the ground up. The design is based on a 74-degree 3.4-liter V6 powerhead developed with the assistance of computational fluid dynamics. A very unusual aspect of the G2 is the positioning of its cylinder banks and exhaust ports. Unlike the usual symmetrical design, on these engines the exhaust manifold for one cylinder bank is off-center, on the side of the engine. This prevents the two banks from “fighting” with each other to evacuate exhaust, improving its flow and boosting torque and efficiency. 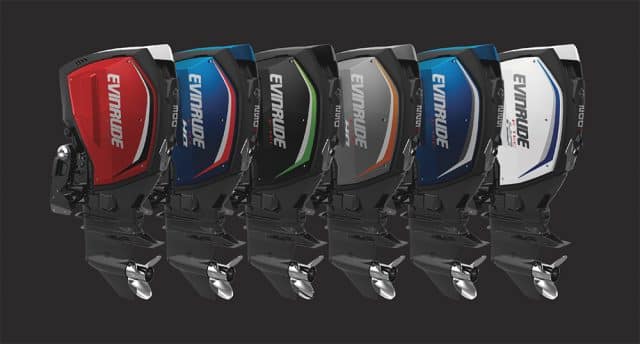 Historically, the two-stroke versus four-stroke debate was defined by advantages and disadvantages that held true across all the different brands and model lines: two-strokes were lighter and offered better acceleration, while four-strokes were more fuel efficient, quieter, and cleaner-burning. The part about being cleaner is a key component to remember, and not merely because four-strokes didn’t subject people to that blue cloud of fumes – ever-increasing environmental standards were the real catalyst for the four-stroke revolution, as the EPA ratcheted up emissions standards through recent decades. 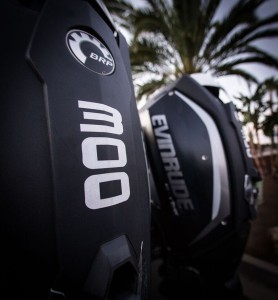 In many ways, the G2 turned this entire argument on its head. While these new-tech two-strokes still have neck-snapping off-the-line kick, and four-strokes still win for quiet operation, the new G2’s have posted efficiency numbers significantly better than many four-strokes – often to the tune of 10 to 15 percent at cruising speeds. Yet on the other hand, two-strokes are now (just barely) heavier than some of their four-stroke counterparts. The 250-horse G2, for example, tips the scales at 558-pounds while the Yamaha F250 comes in at 551-pounds. As far as environmental friendliness goes, all the modern offerings meet or exceed the tough current EPA standards.

Maintenance is another part of the two-versus-four debate that’s changed with the G2. Most manufacturers recommended a 100-hour maintenance period in the past and this is still true for those in the four-stroke realm. But G2s have their scheduled maintenance checks at 500 hours. That’s quite a bonus, especially for owners who live in the boonies. 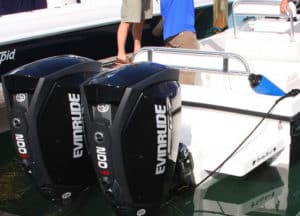 What about the reliability piece of this puzzle?

It’s a tough call. Like any form of engine there’s always a risk of mechanical difficulty but both the G2 line and the modern four-strokes on the market are certainly light-years ahead of the outboards built a couple decades ago in this regard. They’re far more like modern cars, and while outboard engine failure used to be a rather common event, today it’s very unusual across the board. While it’s true that the newest part of the G2 line, the 2.7 liter models, have only been on the water for a very short period of time, it’s also true that Evinrude is showing a huge amount of confidence in them by offering a 5 year warranty and recently having provided 10 year coverage during their spring sales push.

Perks of the Evinrude E-TEC G2

Since Evinrude designed the G2 from a clean slate, they were able to also make several advances in areas that had more or less stagnated across most competing outboard lines. Rigging is a great example. Up until now every outboard on the face of the planet has had a steering arm, rigging tubes, and tilt/trim rams. Many of these pieces-parts clutter up the transom and force extra space in the boat to be dedicated to the motor well, plus they all introduce opportunities for parts failures. Not so, with the G2s. These systems are incorporated into the motor’s mount, requiring just one tube leading from the boat to the top of the mount.

Power steering, which is included on all motors above the 150-horsepower mark, is accomplished via a hydraulic helix system. Tilt and trim are accomplished via another integrated hydraulic helix and the motor pivots on a tilt-tube. Since everything is part of the motor mount and the mount sits behind the transom, less room is needed forward of the transom to provide rigging and tilting space. In fact, when we tested a pair of G2 300s the boat manufacturer’s rep agreed with the Evinrude rep, when he asserted that this rigging system could allow the builder to trim down the motor well length by several inches – adding that space back to the cockpit of the boat.

Another unique feature of the G2 line is its cowl, which consists of side panels rather than the usual lift-off top. This allows for custom-matching the color of you boat, but of more importance is how easy it makes performing regular inspections. A side panel removal allows you to see the gearcase lube reservoir so you can easily spot lube level, and if there’s any water intrusion. It also provides easy access to the fuel-water separator and gives a visual on the oil reservoir, which is filled via a port on the top of the engine.

The Bottom Line On Evinrude

When it comes to outboards pricing does vary quite a bit, depending on a number of factors ranging from whether the engine is part of a boat-motor package to what dealer you’re buying from. We’d love to give you a solid figure, but that would be unrealistic. We can, however note the Evinrude E-TEC G2 line is competitive with the other major brands out there. Look at the price of any 250-horsepower model, for example, and you’ll notice that all the major brands are within about 10 to 15 percent of each other. 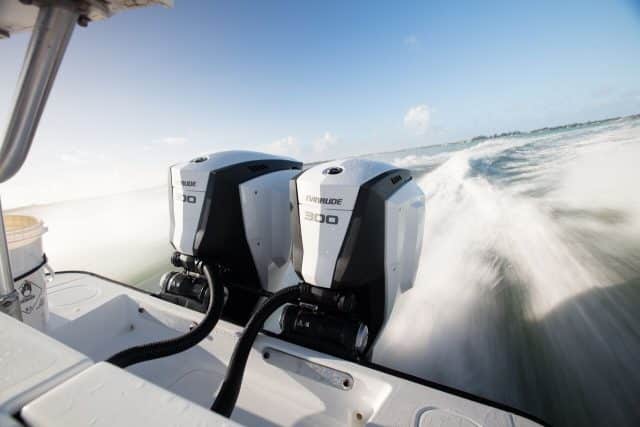 Is a G2 the right motor for you?

That question, we certainly can’t answer – it all depends on how you prioritize factors like efficiency, sound level, maintenance intervals, and the other variables we discussed above. But one thing is for sure: whether you’re a two-stroke aficionado or a four-stroke fan, the two-versus-four debate is alive and well.