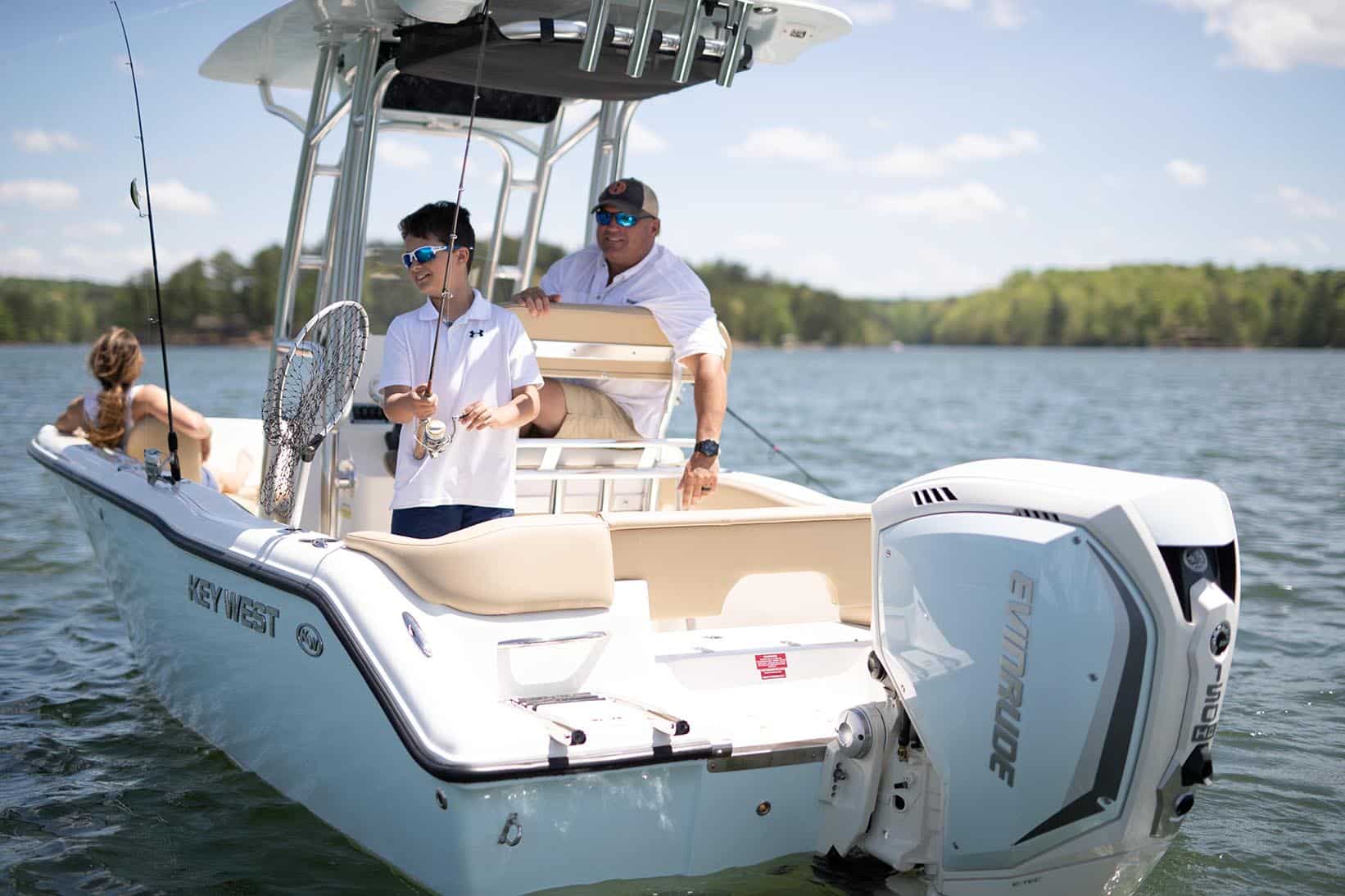 Back in 2015 the newly-introduced Evinrude E-TEC G2 won an NMMA Innovation Award right out of the gate. Then two years ago when Evinrude introduced a down-sized version of the E-TEC G2, it won Top Product Honors from Boating Industry Magazine.

Well, we hope they’ve dusted off another shelf on their awards cabinet. After spending a day running various boats rigged with the all-new 115 HO, 140, and 150 horse G2, we’re guessing that this powerhead will prove to be another hands-down winner.

There are three models in this line, including a 115 HO, a 140, and a 150-horse model. Yes, there was already a 150 in the Evinrude G2 line-up, but that was with the 2.7L V-6 powerhead. This new model is an in-line-three that displaces 1.9-liters. That’ll cut some weight, and although as of press time Evinrude hadn’t yet released the specifics on what these models weigh, as a rule of thumb the G2s are within a few pounds of the competitors.

Like the other G2s, these engines make uber-efficient power via direct injection. This is more or less the same advanced EFI technology used to one degree or another by virtually every modern automobile manufacturer (you can find it in everything from Fords to Ferraris). It atomizes the fuel in the combustion chamber more evenly for a better burn. Long story short, Evinrude claims that a G2 has an efficiency advantage over a four-stroke outboard, and our on-the-water experience has proved that this is often true. Certainly, there are differences between the competing four-strokes and you’ll see different results when looking at different sizes and model lines, as well as at different rpm ranges. But as a general rule of thumb, a 10- to 15-percent efficiency advantage at cruising speeds seems to be quite common.

Also like other G2s, these engines enjoy a eye-opening five year, 500 hour window between regularly scheduled dealer maintenance. They also come with a five-year warranty, so Evinrude is basically saying you can buy one of these powerplants and then go fishing for the next five years without any hassles – and if any problems crop up, they’ll cover ‘em. Another way they mitigate the hassle-factor with these new 115, 140, and 150 horse engines is by integrating in an oil tank that has enough capacity to carry through 60 hours of use. For many normal boaters this will more or less amount to an entire season, and to die-hard anglers, it certainly still amounts to quite a stretch of running time before you ever have to think about adding oil.

More on the hassle-factor theme: it used to be that when buying an outboard as small as these, you were doomed to those old throttle and shift cables that you knew would become sticky and tough to use with age. But this platform is designed around digital controls, which not only go clear down to the 115 but are even available on a tiller-steer configuration. Same goes for power steering, which like other G2s is designed right into the engine and mount.

Most of the other two-versus-four issues have essentially gone moot in recent years, thanks to a number of changes in technology and in the marketplace. Engine weight is usually more or less a wash. Sticker prices are competitive between all the manufacturers. All meet the EPA emissions regs without a problem. It should be pointed out that the G2s do enjoy a torque advantage that leads to neck-snapping acceleration. An on larger boats, that torque means you have the ability to bull through big seas without slowing up even while climbing mountainous aquatic terrain. So, what’s left to consider? Noise and vibration levels. Even as they made huge strides in efficiency and maintenance, this was one category in which most of the four-strokes in the market scored points whenever being compared to G2s.

Evinrude did make headway in recent years, managing to tune down the two-stroke chatter somewhat. It was a noticeable difference. Still, however, most of the competing four-strokes had an advantage. But when we jumped aboard a Blazer Bay 19 rigged with the new 115 HO and turned the key, our ears perked right up to what we didn’t hear – because Evinrude has made another significant incremental change in sound levels. Is it every bit as smooth and quiet as the best of the four-strokes, to our ears? Nope, not quite. But we’re beginning to reach the point where this issue also becomes moot. Instead of talking about an outboard that’s virtually silent at idle, we’re talking about one that’s barely noticeable. And as we advanced the throttle and the engine began to speak up a bit, it was quickly overpowered by wind and water noise just like virtually all modern outboards.

There was a time when every one of us thought the two-versus-four battle was over and done with. Evinrude says not by a long shot, and after spending a day with these motors we’ve got to agree – let the debate continue.