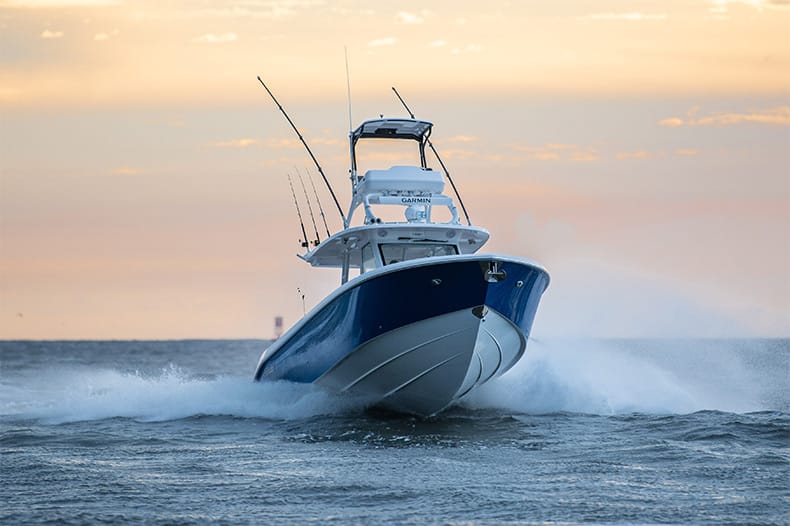 Even among the best, most hard-core center console fishing boats, it’s hard to find a model that comes right out of the box with enough rod holders (and it’s impossible to find one with too many, for the obvious reason: you can never have too many). So we were quite stoked when we noted that the new Everglades 395cc sports 39 rod holders—making it one of the rare fishing machines to achieve one-rod holder-per-foot-of-LOA status. Sweet!

Here’s the breakdown: eight on the hardtop including two kingfish-style mounts; six in the vertical foredeck holders; six on the sides of the forward lounge; six in the transom; and 13 going around the gunwales. Other major fishing features include a bait prep center and twin 40-gallon pressurized livewells in the transom, extensive tackle stowage in both sides of the leaning post, forward and aft fishboxes with a total capacity of 187 gallons, coaming bolsters 360-degrees around, fresh and raw water washdowns, a pair of 30-amp under-gunwale plugs, and in-gunwale rodboxes. Unlike most boats, Everglades also includes a high-end outrigger package (22-foot Gemlux carbon-fibers) on the standard equipment list.

Everglades doesn’t build boats for the shy nor the price-conscious, which is one of the reasons this boat gets such a substantial number of standard features that would normally be considered optional on others. Along with all the fishing goodies, some big-ticket items include a five-kW Fischer Panda diesel genset, Zipwakes, underwater LEDs, Pompanette helm seats, and an 8,000 BTU air conditioning system. Perhaps the biggest, however, is the brace of triple Yamaha F425 XTO Offshore outboards at the transom, which also come with Helm Master joystick controls. Feed those beasts 58 gph to reach 4500 rpm, and you’ll be headed for the blue water at a spiffy 42 mph. When the tournament demands WOT operation, you’ll be able to maintain better than 56 mph (according to Yamaha’s performance results, which we’ve always found to be highly accurate).

Another Everglades trait is the luxury touch, and you’ll find plenty of that aboard starting in the cabin. It’s quite substantial for a center console yacht of this size, with a forward dinette that converts into a large berth, a mini-galley with a microwave and countertop, and a fully enclosed separate head compartment. As is always the case when a console gets enlarged to house a cabin you do lose deck space, which in this case you mostly feel in the bow where the lounger built atop the cabin and flanking bow lounge seats dominate the scene.

Speaking of the bow lounger: there’s another great example of how Everglades brings luxury into the mix. Have you ever seen one built atop a console cabin that had articulating backrests? Now you have. Backrests for the flanking loungers swing up or fold flat, stowage compartments underneath are lighted, and you can press a button to presto-chango the bow deck into a cocktail table, should the desire strike you.

Even bait-watching is done in luxury, from the aft-facing seat built behind the helm. It’s slightly elevated with a fold-out footrest, upholstered with diamond-stitching, has USB charging ports, and air-conditioning vents that gush a cool breeze on hot summer days. There’s stuff you can add to the boat, too, to make it into a total cush-machine. You can get a Mediterranean bow sunshade (which is a waste of perfectly good canvass), replace a livewell with an electric grill (oh, the shame—someone oughta slap you), and add a retractable cockpit sunshade (an unbeatable casting impediment).

Since the Everglades 395cc was at the dock at the Miami show when we saw it, we weren’t able to shove off and put it to the test in some seas. But we’ve spent plenty of time aboard a wide range of their models, and have always found the combination of their deep-V hulls (the 395 has a whopping 25-degree transom deadrise) and RAMCAP glass-around-molded-foam construction kicks some serious butt. But like we always say, don’t take our word for it. Jump on a 395cc, and take it for a test run for yourself.

And while you’re at it, be sure to count those rod holders.