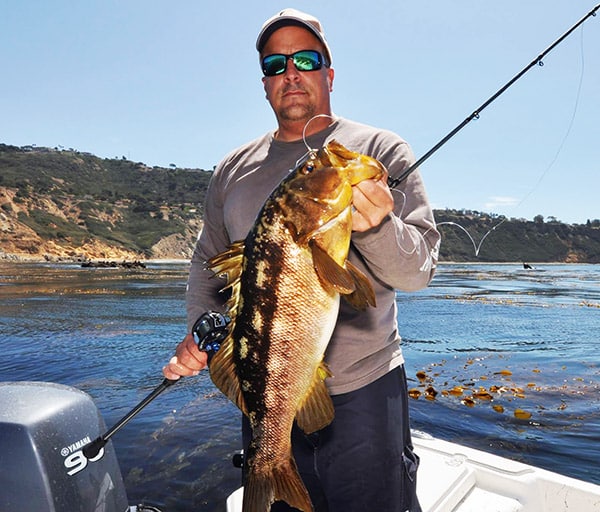 My biggest problem with our message boards (and social media in general) is that every time I look at them, I’m barraged with photos of people holding up big fish; most of them accompanied only by vague stories about the catch. While I love looking at fishing pictures, there are a couple of things that bother me about them. The obvious thing is that I’m sitting behind a desk looking at pictures on the internet instead of being on the water taking pictures. But more importantly, viewing these images out of context can often bias my expectations on upcoming trips.

Take for example this picture of a calico bass that I caught last Friday at Palos Verdes (when I took a day off from work). 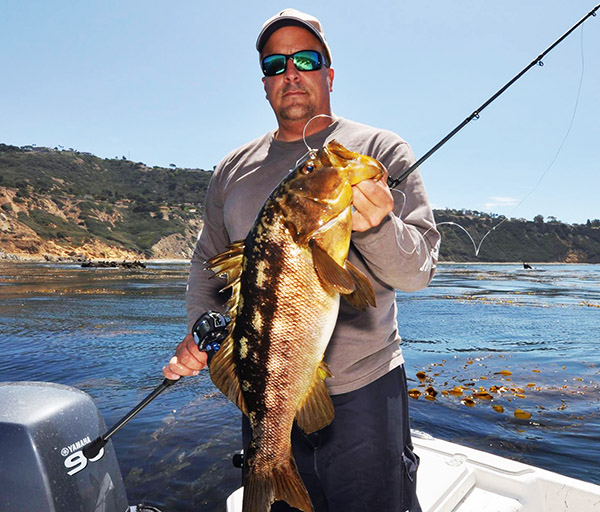 The picture and vague description speak volumes, telling the story of a big bass, caught in the kelp along Palos Verdes, by someone who was lucky enough to skip work and enjoy a leisurely day of fishing, close to home and without having to fight the weekend crowds. The calm waters and laid down kelp in the photo also hint at good fishing with lots of biting bass to be found. Sadly, if you were planning a trip to PV and based your expectations on what you saw in that photo I guarantee that you’d be completely and utterly disappointed.

Here is the reality of the events that lead up to and followed that photograph.

Our original destination for that trip wasn’t Palos Verdes, but Santa Cruz Island. That plan was nixed when we found ourselves stranded by the side of the freeway at the intersection of the 405 and 101 freeways, when my truck’s water pump blew out at 5:30 am. The breakdown was followed by calling a tow truck and making the return trip to my house in Long Beach; that took the better part of two hours in Friday morning rush hour traffic. 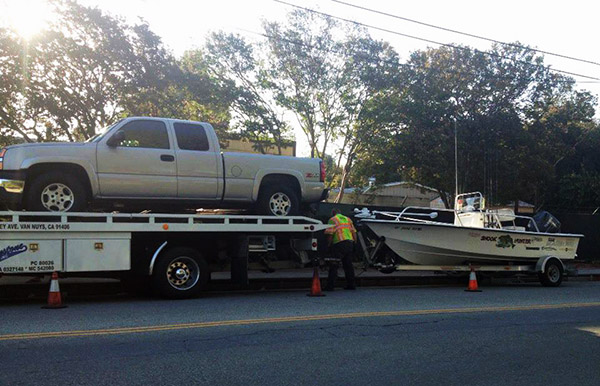 Arriving home at 10:00 am, we left my broken truck at the house and hooked the boat up to Matt’s truck before racing down to Davies Launch Ramp for a 10:30 am departure and we were finally on the water a full 8 hours after I got up to go fishing that morning. We were greeted by Kenya hot weather on the water and not a breath of wind, so we headed to our zone above Rocky Point that had produced fish the previous week and managed to catch three bass (including the one in the photo) in six hours of fishing. Based on our lack of results, we decided to head up there again the next day and only managed one (very un-photo worthy) fish for our efforts.

So, let’s take another look at the first impression from that photo. Yes, it was a big bass caught at Palos Verdes by someone who was lucky enough to take a day off work. However, there was nothing leisurely or close to home about it, as both days were an absolute grind. While PV is close to Long Beach, the part we were fishing is over 25 miles from the launch ramp, so in two days of fishing we ran over 100 miles to catch 4 bass.

If that number isn’t big enough for you, let’s take a look at the mind-numbing amount of casts that it took tocatch those 4 bass. Matt and I both fished the MC weedless swimbait all day during both trips and since we make short casts and fish them fast, it’s easy to average two or three casts per minute while fishing.

Now let’s do the math: two guys, each making approximately 150 casts per hour, for a total of twelve hours over two trips, equals approximately 3,600 casts which resulted in a cast to hook up ratio of approximately 0.11%.

I wish there were a rule that all photos of big fish posted on the internet must be accompanied by a disclaimer stating the actual chain of events that lead up to that fish getting its picture taken.

Speaking of expectations, let’s take a look at one of the big bluefin tuna that was recently caught out of San Diego. 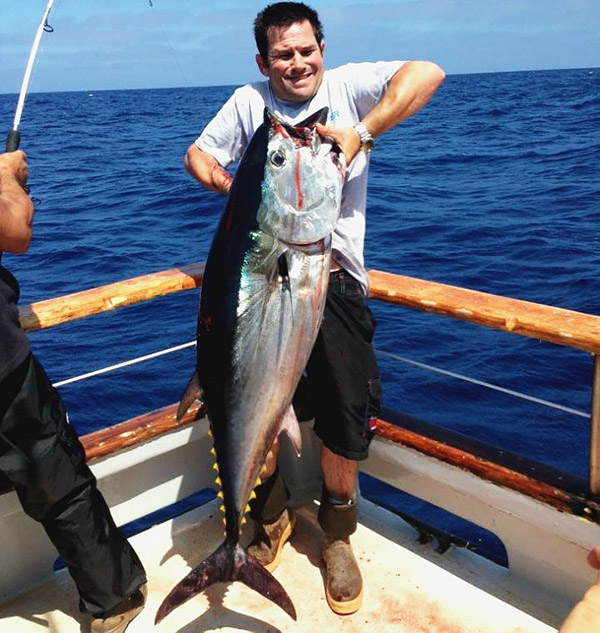 Photos like this are often accompanied by sport boats reporting, “The big bluefin and yellowtail are biting, book your trip now!” These reports are usually followed a day or two later by someone posting on our message boards about how XYZ boat sucks and they are never going to ride it again. The post will usually go on to explain how the boat either spent the day catching tiny kelp paddy yellowtail instead of targeting big bluefin, or how the boat drove around all day fruitlessly targeting big bluefin instead of spending the day catching tiny kelp paddy yellowtail.

Do you see where this is going?

The chance of you catching a big bluefin tuna on an overnight boat may be a little better than the 0.11% chance I had of catching a bass last weekend, but it’s far from being a guarantee. Also, the boats that are catching those big bluefin usually aren’t the ones that are burning time catching 3-5 lb yellowtail. Finally, if you go on one of those trips and the captain is a jerk who “just drove around all day without letting us stop and fish for more than five minutes without moving the boat”, you should thank him for putting in the effort and burning the fuel to improve your long shot odds of catching a fish -like the one in the picture that convinced you to book your trip in the first place.

Regardless of whether you fish bass or tuna, it’s important to remember that you’re going to have a lot more tough days of fishing than you are good ones. So if you head out with the expectation that you need to catch a certain size or quantity of fish for the trip to be successful you’re going to be disappointed. Instead, just get out on the water and fish for the sake of fishing. And when you get that big bite on cast #687 of an extremely long and slow day of fishing, you can hold that fish up for the camera, post the photo online and frustrate the hell out of those of us stuck at our desks looking at fishing pictures on the internet…