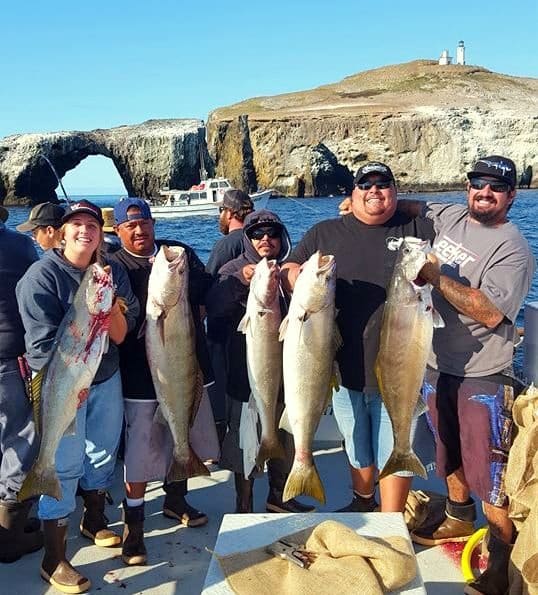 When this current El Nino cycle first started in 2014, there was a lot of speculation as to what we might see over the course of that year.

I remember talking to Capt. Frank Ursitti, owner of the Ranger 85 & Constitution and now the General Manager at H&M Landing. Frank was telling me how back in the El Nino of the early 80’s, he was running the 3/4-day boat the Estrella out of CISCO’s.  On one memorable trip, they caught 4 dorado by the Anacapa Arch!

As El Nino actually unfolded, we were surprised and amazed by each new occurrence…early tuna, late tuna, half day tuna, local dorado, marlin, wahoo.  We were barraged by images of these exotic species daily.  It got to the point where if you didn’t “at least catch yellowtail” the trip was a bust.

Fast forward to this year.  The natives are getting restless.

It’s almost June and we’re into our third year (Part III) of this El Nino condition.  It’s on the wane, but we’ve seen (are seeing) a lot of fish.  Red crab is everywhere.  There is also a lot of fin bait in the water.  On the one hand, the abundant bait is keeping these fish around.  On the other, it may be the root cause of why sometimes they just don’t want to bite.

We’re seeing some remarkable fishing opportunities and I think there is a lot left in the tank for this season.  Couple of thoughts about it…

To the regulars who were around before El Nino, get over yourselves.  The Internet didn’t ruin fishing.  Information gets shared faster, but there would be boat pressure and crowded sportboats without the Internet.  Deal with it.  Hopefully, some of these El Nino anglers will stick around and keep the industry going through the inevitable downturn.

To the El Nino anglers “waiting until it gets better.”  Stop waiting.  This may be as good as it gets.  You have an opportunity to catch a “fish of a lifetime” right now.  It will probably never be wide open 100-pound bluefin or wahoo. Just go.  When this cycle turns around the other way (scientists and weather observers are saying by the end of the year), you’ll have to travel to Cabo or Panama or some other warm water destination to have these same opportunities.  Don’t let them pass you by.  If a trip doesn’t work out, accept it.  Chalk it up to paying your dues and make your plans to get out and try again. If you want a sure thing, it’s wide open at Seafood City and it’s always biting in the galley!

Rant over.  Remember, you’ll never be a part of and feel the thrill of days like this one if it was easy and you could just go “when it gets better.”  If and when it does get better, your waiting may leave you sidelined by those willing to make their commitment earlier.

Get out there.  Good luck the rest of the season.