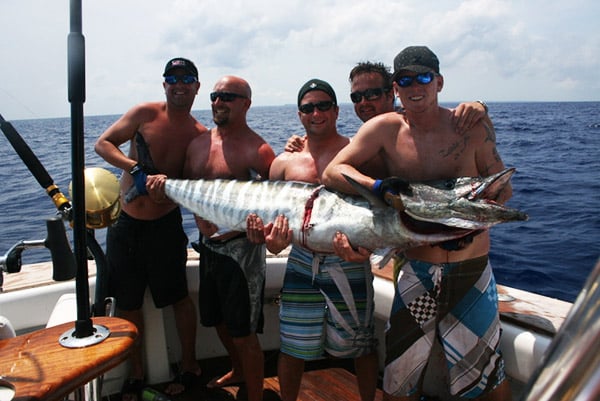 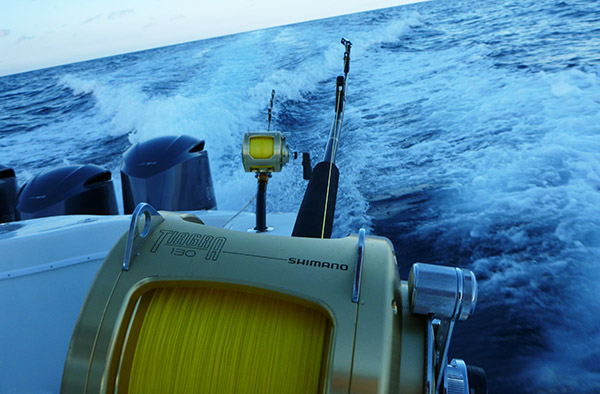 The quiet rumble of 1050 horsepower pushing the boat along at 15 knots is enough to lull you into daydreams, but the roaring clicker of a Shimano Tiagra 130 dumping line at 15 knots will snap you back to reality in a heartbeat. 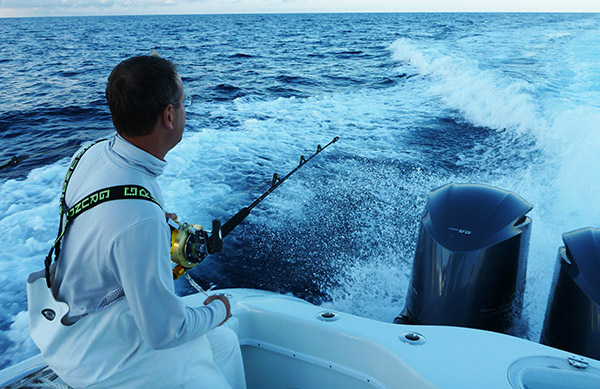 I had the pleasure of joining the crew of the “Fishin A Loan” out of Ponce Inlet, Florida recently. It was a gorgeous October day. Calm seas and warm temperatures did not have the feel of normal winter wahoo conditions that one might normally endure. I was fishing with Kevin Marsh the owner of the 39′ Yellowfin and his buddy Mario. 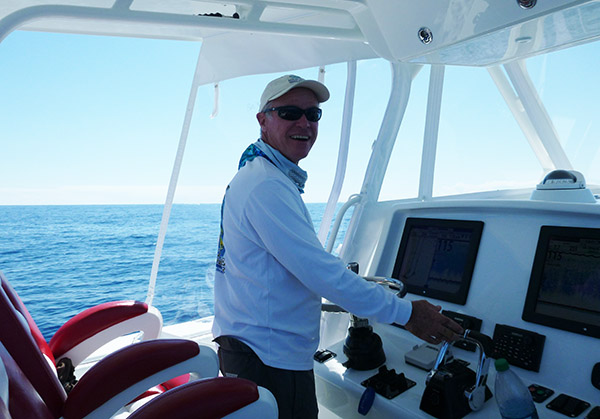 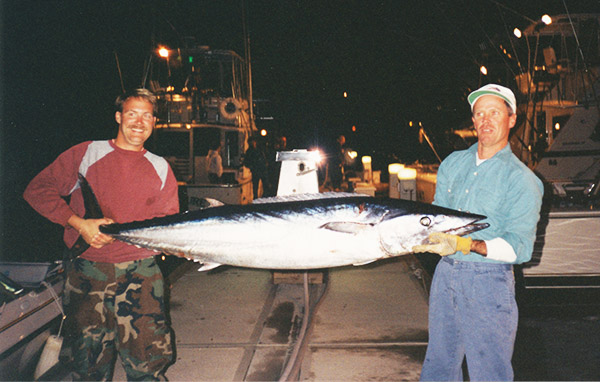 We had many great times, especially memorable for me as they were usually my first encounter with a certain species or chain of events. To this day, my biggest wahoo was caught with Capt. Charlie. I can still picture the scene as if it were yesterday. I was leadering the forty feet of mono behind the planar and exclaiming “It’s a giant wahoo”.

Charlie’s wise words were: “Settle down, take your time”.

Those words still ring in my head when I’m getting fired up about a big fish. I do still get excited, but learned from Capt. Charlie to save it till the fish is sucking ice.

So it was with many memories and stories that we rode out this beautiful October morning to see if any wahoo had shown up yet. Though wahoo are caught year round, the cooler months are the times to target them.

High speed trolling is the best way to target wahoo, because without a doubt, they like it fast!

We passed a few edges on the way east, but even in the early morning light, we suspected the water was still a brownish green. Around the 30-mile mark, the water had blued up and we put the lures over in 150-feet. 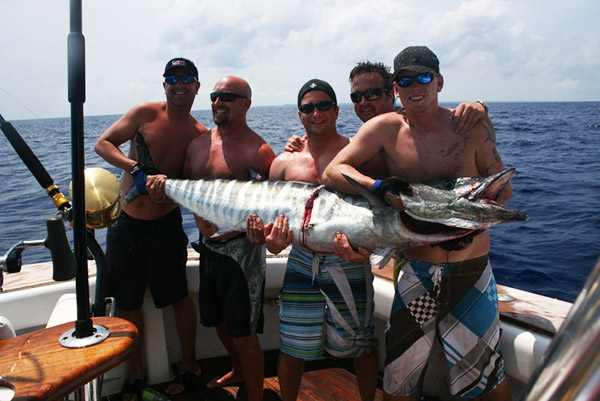 Charlie and Kevin have been fishing many of the wahoo tournaments that take place in the winter in the Bahamas. Wahoo can be thick and big there and high-speed fishing has become the standard. Capt. Charlie recounted the first tournament they entered, and never caught a fish. They were thinking that the fish just had lockjaw, until the other boats covered the docks with wahoo. Persistence and the desire to learn more has catapulted them up the learning curve and they have placed or won many of the tournaments that followed. 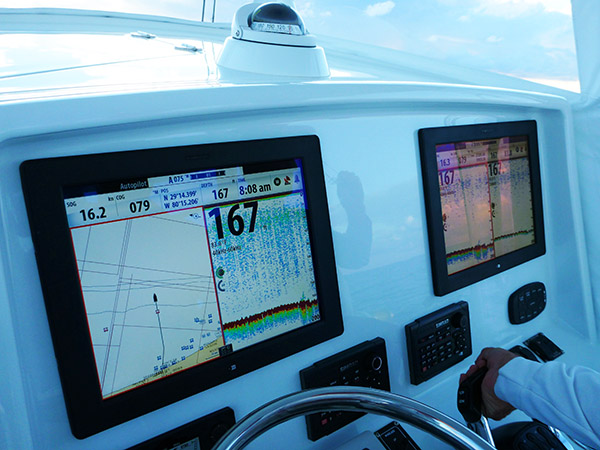 Since most of their Florida based wahoo fishing had been done running north towards the bottom contours off St. Augustine, they had not spent any time exploring the areas closer to Ponce Inlet, near their homes. Our trip was to be the exploratory one, even though we wondered if it was a little early in the season.

“You never know till you go”

is what we often say, so we headed east towards the bottom topography displayed on the Simrad charts.

We deployed a spread of high-speed lures, which consist of an in-line trolling sinker, a 30 to 40-foot mono leader and lure with cable leader. All of these are built up to be heavy duty to endure the pressures created by the fast trolling speed in collision with a torpedoing wahoo.

The trolling sinkers varied in weight, but the closest to the boat were the heaviest. That amount of heavy hardware in the water going 12 to 15 knots creates an incredible amount of pressure at the reel. That’s why a set of 130 Shimano Tiagra reels filled with braided line is the tool for the job. The rods all had bent butts and swivel tips, as one would have on a deep-drop outfit. Outriggers are not involved with this kind of trolling and everything is pulled from the rod tip. Heavy-duty rod holders were installed to withstand the pressure of this specific type of fishing. This method is not for the meek and it is more about catching the fish to eat him, than it is to play a fish at the end of a light line. With that being said, when the clicker starts roaring, it is awesome! 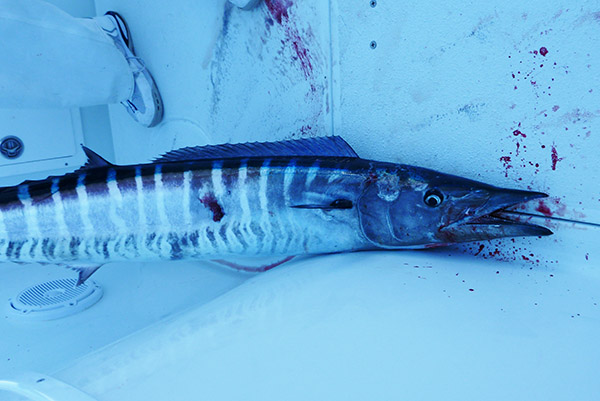 We didn’t have to wait five minutes, before that sound filled the cockpit. We all looked at each other and said, “must not be too early”, referring to the season and warm weather. Capt. Charlie keeps some forward motion with the boat, while the “lucky” angler gets to crank “as steady as you can” on the reel. Clearing all the lines is important because a tangle is not pretty. Once the sinker hits the rod tip, the angler steps back with the rod and the wireman leaders the mono section as steady as possible, bringing the fish along side for the gaff. Five minutes in and our first striped “whoo- fish” hit the deck.

The day continued with us charging around the ocean covering lots of ground and marking tons of bottom structures for future reference. The fish kept coming, including one triple hook up of which we landed two. Our total for the day was seven wahoo for eight bites. Not a bad ratio and by normal Florida standards, a whacking of the wahoo. Most of the fish were between 20 and 30-pounds. Wahoo grow to over a hundred, but Capt. Charlie said they are smaller earlier in the season. 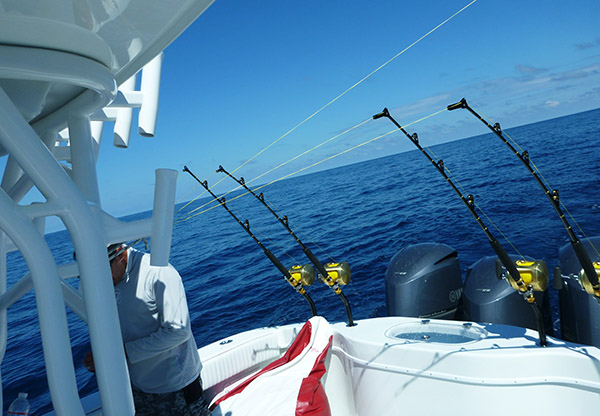 We called it a day at 1:30 and wrapped up our rigs and prepped for the 40-knot ride in. One thing they did that was interesting was to secure their rods by attaching the swivels to a rope on the hardtop to steady the rods for a high-speed ride. Twenty-seven years later, I’m still learning from my mentor Capt. Charlie and loving it. 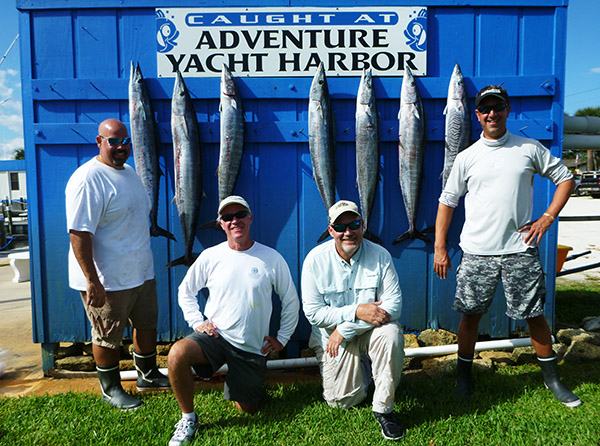 That is the beauty of fishing. It is always evolving and if you keep an open mind, you can always learn new tricks and come up with your own. Thanks to Capt. Charlie for getting me started and to Kevin for a great day of fishing!

Note: Capt. Charlie is the owner of Adventure Yacht Harbor in Daytona Beach, Fl and runs a great operation with a friendly, small-town atmosphere for boat owners and live-aboards to enjoy. They have slips, boat storage, fuel, charter boats, a water-side restaurant and a first class fish cleaning table!