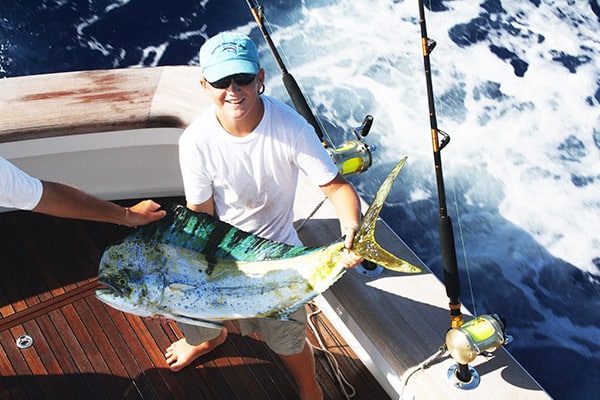 Whether you call them dorado, mahi mahi, or dolphin fish, this is one of the highest prized game fish found anywhere in the world. Providing an incredible fight on light tackle, launching to the heavens, screaming drags in long blistering runs and they dog it out right up to the time the gaff sinks in. Don’t relax when the fish is onboard, because they aren’t finished! These fish can be down right dangerous on deck, you should never turn your back on one or you’ll end up with a size 10/0 hook imbedded somewhere in your body! Mahi mahi are one of the fastest growing fish swimming. They are eating machines and are found in all the worlds’ warmer climates.

Mahi mahi seem to always be hungry, and will feed aggressively at times. When they are fired up, they will attack even the largest of billfish lures! Smashing into the spread, white water rolling off their backs as they charge into the lures with wild abandon! Then again the same fish, may not even look at a trolled lure on a 2nd pass, but that doesn’t mean he or she still can’t be added to the brine bag. Like we mentioned they are always hungry, but sometimes these fish can be finicky as a spoiled teenager who only wants pizza hut.

Out of all the pelagic species we chase, mahi have traits that can be counted on nine out of ten times.

These traits, once we recognize the circumstance in which they are being presented, will take some of the guesswork out of being successful, and flying a mahi flag at the end of the day.

Mahi mahi have followers, and I don’t care if you are in the Bahamas or Tonga if these fish are on the surface for any length of time; birds will take notice! In the Pacific, from Hawaii stretching all the way South to Vanuatu ‘mahi mahi birds’ follow mahi mahi!

These are white terns that just can’t ignore a free swimming fish, and when the fish is in feed mode the tern will dance and dip like crazy; picking up any left over crumbs! You see a white bird dipping up and down onto the surface in these waters; I flat guarantee that bird is over a mahi mahi who is enjoying lunch!

I think FADS were created with mahi’s in mind! There are always mahi mahi near FADS; they may not be showing, but they are around. Anything floating like a log, fishing net, 55-gallon drums, or even a trawl float or balloon, will attract mahi mahi like a magnet! If you see something on the surface, make a pass or two around it. Chances are excellent it will be holding fish (My two biggest days ever were around floating trees).

In the Gulf of Mexico the FAD buoys happen to be really LARGE! Oil platforms, and drilling ships are scattered all over these waters and man oh man can these hot spot produce some really trophy class mahi’s! The current will run off these massive structures creating weed and debris lines that attract bait, which attract the game fish, which in turn attracts us! Fish the edges of these with a good mix of lures (large marlin stuff in close, smaller wahoo, tuna, mahi plastic on long riggers and shotgun) Give the area a good couple of passes, and pick up the aggressive fish first; when it slows down run out the live baits in the area you have the most knock downs. Hard tails around 8 to 10 inches seem like candy bars to a ten year old!

The last two weekends this past July on Gordon Gills Hatteras ‘Never Better’ out of Orange Beach, Alabama, produced over 30 mahi, from 10lbs schoolies to 30lbs bulls, around the offshore platforms using this procedure! When conditions are right (blue water is a big item!) the mahi fishing in the Gulf can be some of the best in the world.

Ok Fish Story! Years past in my Hawaii days, I had a buddy named Tom who worked for the Navy in intelligence, and like any intelligent man would take a day off from work to go fishing. If I need a fishing partner I’d call Tom the night before, he’d call in sick and be at my boat with ice and beer at 5:00am the next morning! This morning, (like most perfect Hawaiian days) was a beautiful clear dawn, a light SW trade wind easing on with the sunrise as we headed offshore in search of ahi; towing a mixed spread of marlin and ahi lures. Tom spotted the birds first about a mile or so off our port bow, he set the binoculars down a huge smile spreading across his face.

There is a hell of a pile of birds at 3:00 o’clock!” We did a hard bat turn and soon I could see them with my naked eye. ‘Holey Smolley’ (or something to that effect), better get down on deck; this is going to be great! Within a quarter mile I could see something in the water, a dark blotch in contrast to the indigo blue Pacific. Soon this became apparent – a tree, a massive root system and “Oh My Bloody… look at the friggen mahi mahi!” literary hundreds if not thousands of mahi were swarming around this nurse log at sea! Everything on deck went off as one and we weren’t within two hundred yards of the log. I kicked the boat out of gear and leaped to join Tom on deck. Mahi mahi were all around the boat and we had five fish on going every which way. Lines crossing up, just total mayhem!!! We managed to land three out of five, and to this day I can’t remember how, everything is just a blur; stimulation overload. We were like two thirteen year old’s who just discovered their older brother’s secret playboy stash!!!

We untangle, stash the fish in the brine bag, re-rig the outfits, and like two sane guys only set out two lures- Wrong! We are psycho, crazed, and totally mental, all five rigs go back out and we line back up on the tree.

Wham everything goes off again, we cheer and jump into action. Tom grabs the first rig he comes to, a 50 wide, and all of a sudden his fish becomes bait!

A monster blue surges up though the forest of swarming fish and gobbles Toms mahi. All of a sudden we find ourselves hooked up to an 800lb blue on stand up gear-with four mahi mahi also hooked up doing their absolute best to create a tangled mess.

To make a long story short, I reluctantly cut loose the other four fish and about 300 bucks worth of lures, we fought the huge billy for half the day before parting her off and totally lost sight of the log (never took a GPS reading on it). We only had three fish in the brine bag for all that, but you know that day still ranks right up there as an all time classic! The whole key to that memorable day was keeping a sharp eye out for birds!

We could have just as easily driven right on by that biomass of fish! What happens when the mahi mahi are lure shy, you drag an arrangement of lures across the noses of a group of fish around a FAD, and not even a look! Ok here is a trade secret that will add some weight to your brine bag, but you just gotta have this one ingredient… ‘aku’ or skipjack belly- fresh is best, but frozen are do-able. Rig a 4-inch strip on a small 5/0 circle hook on a 20 foot 30lb-50 lb test leader (shyer the better). Take in all the lures and run out the two strip baits about 75 yards and 100 yards behind the boat, in and out of gear to just maintain steerage; creep up on to the buoy. This won’t take long, fish on!! Strip baits are so deadly they probably should be illegal. I even had a client hook up a 100lb blue on a strip intended for mahi’s, the guy was in shock when that little billy exploded out of the water 50 yards behind the boat, the Penn 30 screaming in his hands! In my Pacific days I had never really been set up with a live bait tank, just tuna tubes, so I can’t compare live bait to strip bait for mahi mahi, but I can well imagine how deadly a livey would be, after seeing how well it has worked this summer in the Gulf. In my case, we never really needed a well, as the stripper has always been the hot ticket for these fish.

Briefly we mentioned that mahi’s were dangerous on deck, well this is an understatement! They can be a nightmare, and when multiple fish are coming in a well-trained deck crew is worth their weight in gold! I did a lot of live on board charters, where keeping the whole gang safe was top priority, no hospital or even a damn plane for a hundred miles. Consider all mahi mahi “hot” when they are gaffed and brought onboard, a fish that has been played out, once a gaff is sunk will find extra strength and fight like hell to get loose.

NEVER EVER pick a mahi’s head out of the water while leadering and bringing to gaff, this will just entice the fish to jump. Keep the fish head in the water slowly bring to the gaff, and close to the head as possible is your target. The gaffed fish is then immediately pinned in the corner, bend the tail to the head and bridle the beast! The bridle set up is simple – a long shank open gate hook in about a 10/0 (bend the barb flat) with a 3-foot piece of twine spliced though the eye of the hook, a small snap on the end. The hook goes into the corner of the boated fish’s mouth; wrap the twine around the base of the tail, snapping the clip back onto the line. That mahi is now well bridled and safe to handle, unhook the fish safely and watch the color changes, from yellow to blue, to green. The clients can now handle the bridled fish for these color phase photos that is if another isn’t on its way to a lure. Most anglers have heard the old method of keeping one hooked up fish in the water to keep followers around the boat and I’ve seen this old proven technique work on many occasions. Very simple if you know you’re not into a single fish, don’t boat the first one, keep it free swimming about 30 feet out, and present another strip bait; once that one gets eaten bring in the first. This can be so deadly that it borders on commercial fishing!

The largest, single, most important piece of advice I can pass on is to be aware of your surroundings! Invest in a good pair of binoculars and have them handy from where you drive. The guy who tells you to stare at your lure spread all day, is not giving you good advice. Big Game Fishing is like its land-based brother, Big Game Hunting!

Look, and look hard all day, for birds, splashes, floating stuff, anything that is different and draws your eye. That big bull mahi could be a couple hundred yards off to port under the single white bird hovering in the air and if your eyes are glued to your spread, you’ll drive right by tomorrow’s dinner.

Once you’ve caught them, here is how to clean them.