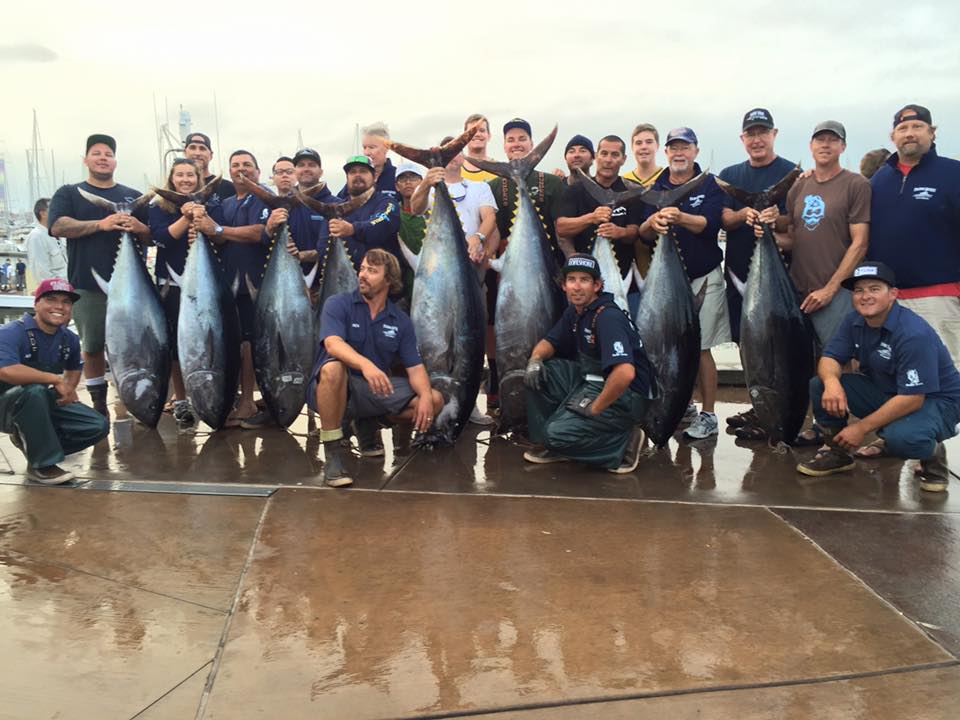 I’ve been asked several times in the last week…

We’re talking about offshore fishing and honestly, this is uncharted ground for me.  The El Nino event that started in 2014 is winding down.  This is the first El Nino that I’ve lived through as a consistent angler in our waters here in Southern California.  None of the seasons that we’ve experienced it have run a typical pattern and I’m not seeing one this year.

Lots of good things have happened this year.  Leading that parade has been the giant cow bluefin tuna that have hung around for quite some time now.  July ended with a bang.  The Pacific Queen was out on a day and a half trip last weekend. Capt. Drew Card put the 21 anglers aboard on 12 Bluefin Tuna (photo top), 119 yellowfin tuna, and 1 dorado.  A great trip!  Of the bluefin, 3 were over 200-pounds!  The “runt” was merely 70 and the rest were over a 100-pounds.!  EPIC! Boats out of the Oceanside and Orange County landings are even getting in on it.  Last Sunday July 31st, Capt. Andrew Viola of the Thunderbird ran into some bluefin (right) that wanted to bite when they got kicked out of their normal San Clemente stomping grounds by the Navy on an overnight.

Andrew was so encouraged by what he saw, he decided to target them for Monday’s trip.  He got blanked.

Oh but the yellowfin are coming and they won’t be finicky like those pesky bluefin will they?  Uncharacteristically, they are this year. The Coronados have slowed down on the yellowtail, so Capt. Taro Takeuchi decided to take it offshore on his boat the Liberty on a 1.5-day fishing on Tuesday, August 2nd.  They got into 18 yellowfin and 7 dorado.  My buddy Rachel Todd (left) scored 2 nice yellowfin.

The next day Capt. Taro reported, “Saw some really good schools of yellowfin tuna today… But we only managed 3 yellowfin and 1 yellowtail. If these fish ever get their attitude fixed, we’re in for some fun fishing!!!”

These two stories from this last week pretty much sum up how it’s gone this year.  Something gets us all excited to go hit it offshore, and half the time it’s just not that good.

The good news is that paddy yellows are still paddy yellows. Even better, there are some pretty big ones out there with fish in the 40-pound class being reported.  We have them as a fallback, but as one 805 angler put it to me recently, “Why would I drive all the way down to San Diego and go offshore to catch yellows when we’re catching them here?”  Fair point.

So you want a recommendation?

Just go fish.  Get some buddies together, make your reservations and just commit to going.  Accept that the opportunity for epic is there, but as I’ve already said before, it’s just an opportunity. Stay tuned over here and on Facebook.  I’ll do my best to tell you what’s up and what’s working, but it’s a roll of the dice.  The ocean is vast.  It’s mysteries and treasures will only be revealed if you get out there and give it a try.

Next weekend, my plan is to try for white seabass on the Pacific Islander.  We’re coming up on a full moon phase again, and if you want a pattern, that’s one that’s more or less followed through this year.  Before the end of the month though, I’ll give offshore another try.  All you can do is plan to go and hope for the best.