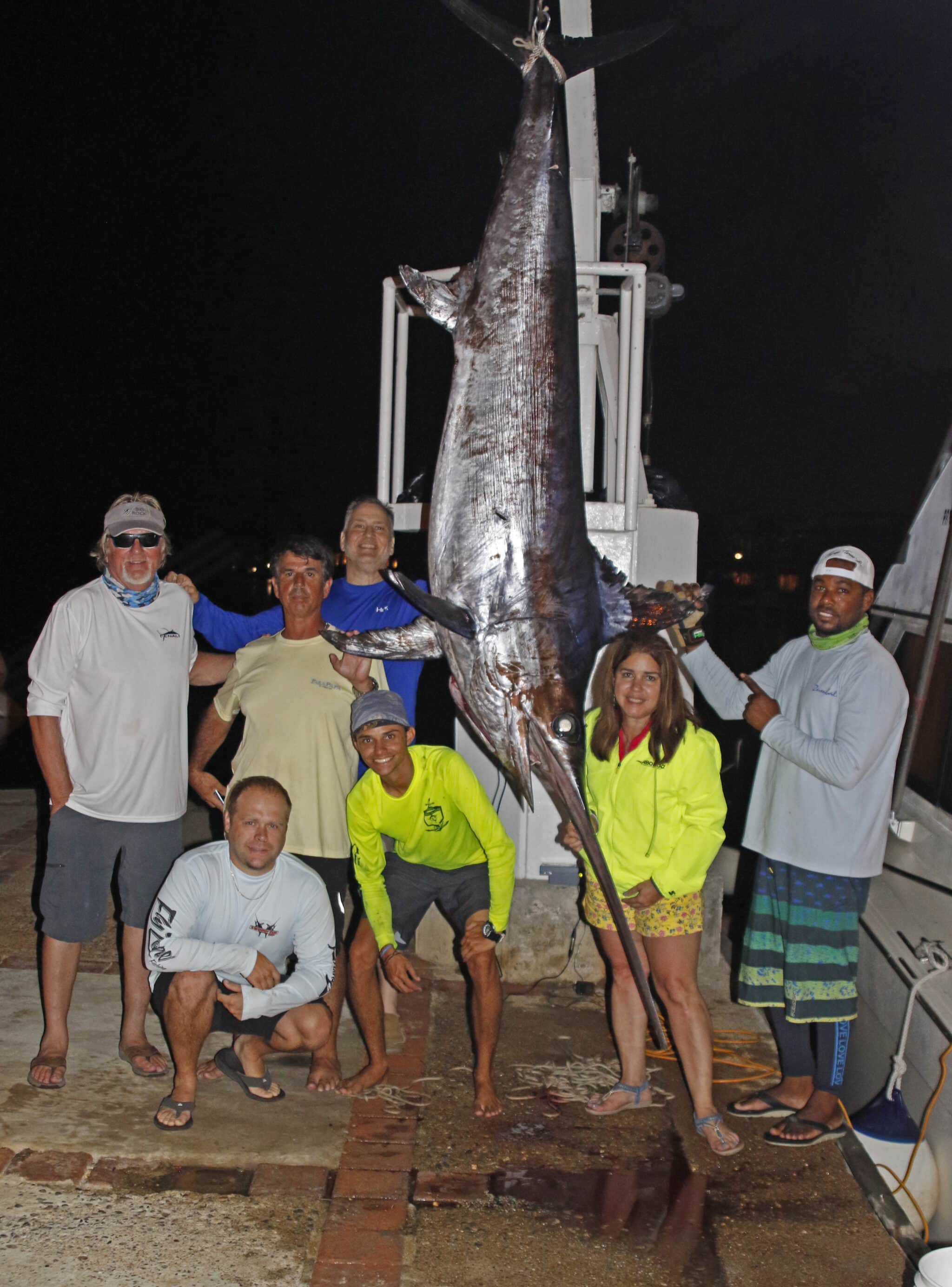 The 1st Annual Swordfish Cup, a single-species tournament with a 24-hour global format, was held July 27-28, 2019, with 23 boats in the initial fleet. Paco Vela and his crew aboard Dulce Coco, a Hatteras based in the Dominican Republic, were declared the winners with a 381-pound broadbill. The Swordfish Cup was presented by Fly Zone Fishing and RJ Boyle Studio. Updates were broadcast on FaceBook every two hours during the 24-hour tournament.

Dulce Coco’s fish was caught on a whole de-boned and butterflied bonita near Isla Saona off the southeastern tip of the Dominican Republic. The 95-inch sword was boated late the first night and was weighed at Casa de Campo in the early hours of the morning. Vela and his team won a cash prize and the $1,500 Hooker Electric Bounty for their efforts.

With boats fishing Grand Cayman, St. Maarten, Cancun, the Gulf of Mexico and the Florida Keys and East Coast, the competition was intense. Luna Tico brought a 291-pounder to the Sailfish Marina in Palm Beach at 11 am. Tournament sponsor and local expert RJ Boyle, competing aboard Hooked Up, brought an 80-inch 250-pound entry to the Lighthouse Marina in Pompano Beach around 6 pm.

Aussie Rules fished during the day off Cancun, Mexico and caught a non-qualifying fish. The minimum weight was 200-pounds. The crew reported a very low-key, fun and relaxing day of fishing, however. Because of the time-zone differences, many boats communicated with tournament control via text or WhatsApp.

In the Gulf of Mexico, The Duke captured some smaller swords along with a very large mako shark. Tighten Up, based on the Texas coast, went five for five on swordfish with the largest measuring 72-inches from the fork of the tail to the tip of the lower jaw. All line class weights were allowed. Anglers could only use conventional rods and reels, including electric mounted on rods. Weigh-ins were conducted at approved scales certified by governmental authorities within the last year.

Yellow Whip, fishing out of St. Maarten, staged a determined and late challenge. After the crew fished all day in extremely rough conditions, they returned to port to rest and eat. The boat went back out around midnight and hooked up right around dawn. After a battle lasting 2 hours and 40 minutes, they finally boated the swordfish which tipped the scales at 291-pounds.

“Everything went really, really well for a first-time event,” says Tournament Director Robert “Fly” Navarro. “I’m happy with the participation and the geographic spread. All the teams reported having a good time and the number of boats will only increase based on the feedback and inquiries. Congratulations to Dulce Coco and thanks to all the teams and our sponsors. I look forward to the second edition next summer.”