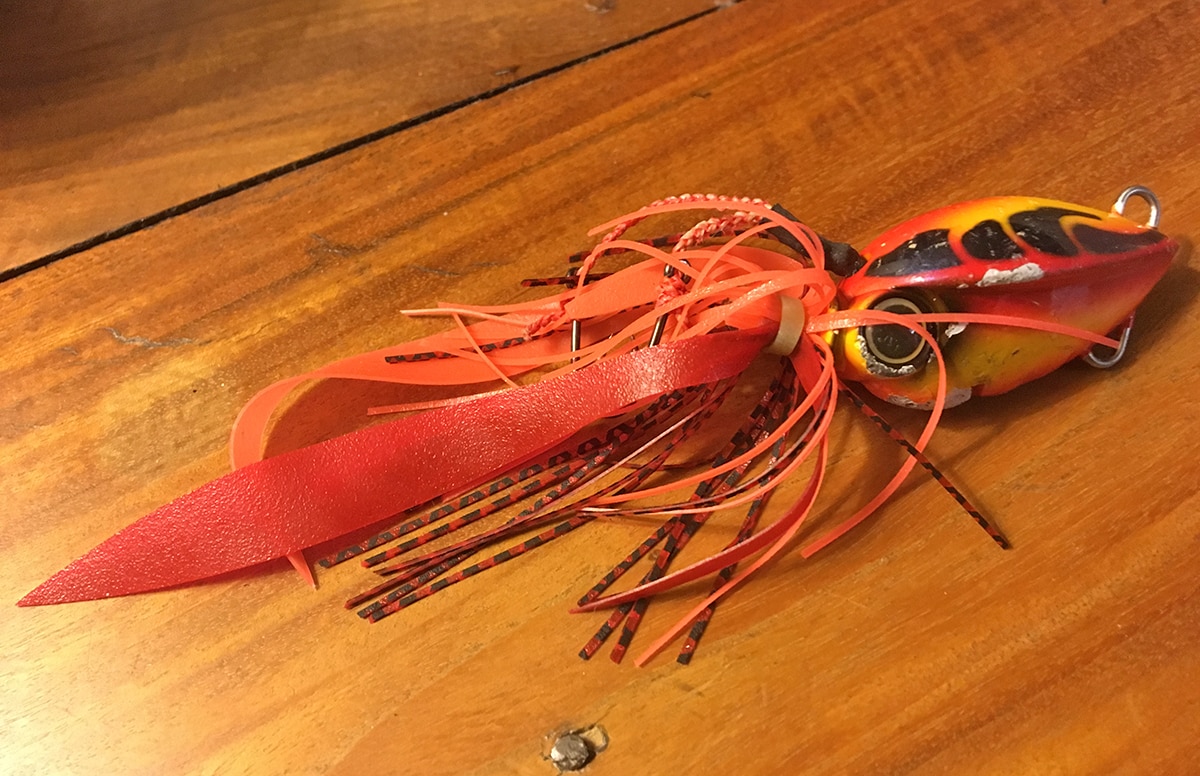 “What’s the hot jig right now?” I admit it. I ask. I look at the pics and note what I’m seeing. If you do the same.

You’ve probably noticed that “red crab” seems to be the hot jig at Colonet right now. There has been a lot of red tuna crabs in the water down there, so it would only stand to reason that a red crab colored jig would be the right choice for the occasion. There’s more to it than that though. If these fish are truly ‘keyed in’ on red crab (and from their stomach contents they definitely are), why would they bite a jig that is way bigger than a tuna crab or fished in the traditional high-speed of a yoyo jig.

So Does Color Even Matter?

I’ve been thinking about this topic for over a year. Those damn crabs have been present for at least that long. How much crab has kind of ebbed and flowed with the arrival and retreat of the warm El Nino water, but red crabs have been around.

If you want to talk “match the hatch”, the small size Shimano Lucanus in the “Sunset Crab” color should’ve been a killer for all species. The color is right. The size is right. You basically dead stick it or slow wind them, more closely resembling the movement of the tuna crabs. But I caught squat on it all year and I tried a bunch of times.

There are very few absolutes when it comes to fishing. People are always asking me, “What’s the best way to catch (insert name of fish)? The correct answer is “it depends.”

One absolute with fishing is, “fish where the fish are.”

In my Colonet trip last year, I didn’t start catching until I discovered the fish were higher up in the water column than we previously thought. They also reacted to a slower retrieve than the normal as-fast-as-you-can wind we’ve been taught for the yoyo technique. In that scenario, the pattern didn’t have to do with the color of the jig, as much as it did with finding the right zone where the fish were and then finding the retrieve speed they wanted. Once I figured that out, I enjoyed a quick succession of four fish. On this year’s trip, the key was getting down close to the bottom where the fish were and then maximizing the amount of time spent with the jig straight up and down. The heavy 300-gram Jimyjig in Firetiger was a good call because it was heavy and got down faster. I also cast it far against drift so that I could get a good 3 or 4 winds in the zone at an angle that was close to vertical. And because the fish were so deep, I think the glow of the jig definitely helped make it stand out. So if a jig isn’t working, don’t automatically swap out the jig.

Try these other things first:

On that last one, sometimes just being different is attractive enough to entice a bite. When you think you’ve exhausted your options, just try something else. Or if you have a good bag going already, try something different just for the heck of it. You won’t know until you try.

Who knows, maybe you’ll discover something new before anyone else does. Give it a shot and let me know how you do.