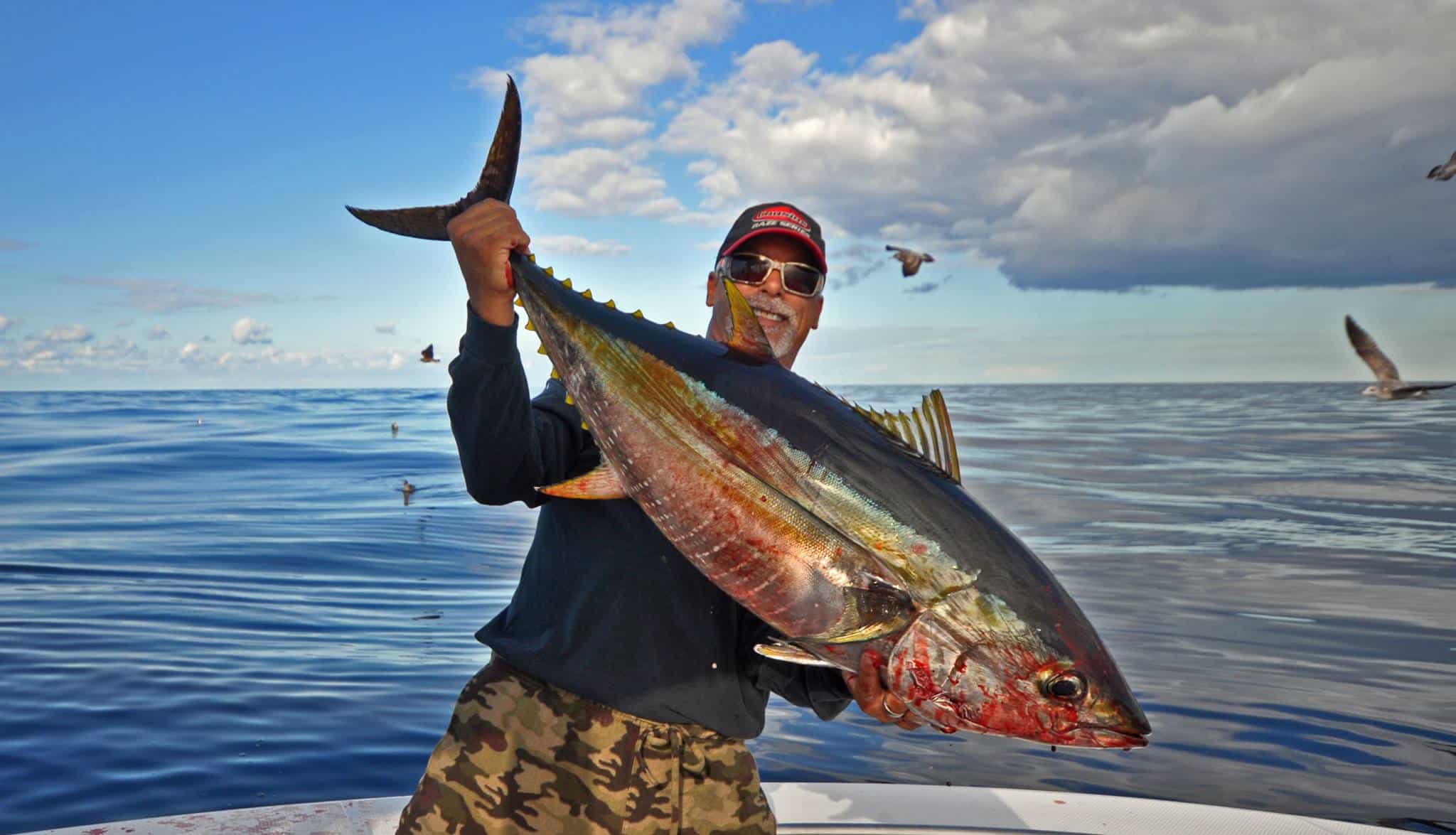 Much earlier this year, I was having a conversation with my friend John Curry about just how long the 2015 offshore fishing season might last. At the time, I half jokingly told him that the way things were going, I wouldn’t be surprised if we were catching tuna on Thanksgiving. Well, what seemed like a long shot prognostication six months ago now looks like just another underestimation of this year’s fishing potential. John and I didn’t end up fishing on Thanksgiving, but we did run out of San Diego a couple days later with our buddy Gerry Mahieu and the amount of tuna we encountered was surprising. In hopes of avoiding the crowds, John ran down towards a temp break below the 371 and we found a paddy loaded with fish on the cold side of the break. First round was all big ones and the three of us were bent for the better part of two hours but only went 2 for 6. The smaller ones showed up after that and we were done in short order.

On our way in we listened to boats spread over 10 to 12 miles above us catching fish. We also drove by several more paddies that had big tuna schools marking below them and once we got inside of the Coronados we found dolphin that were holding tuna as well.

We literally saw or marked more tuna in more places than we did in the middle of summer.

The drawback is that the fish are on the small side and they aren’t biting all that well for everyone every day. But what the heck? It’s December and there are tuna to be caught within 3/4-day range of San Diego. You really can’t ask for much more than that. In other news, there are still scattered yellowtail biting along the coast from Santa Barbara to San Diego. I spoke with Captain Nick Tharp of El Tiburon Charters who fished out of Santa Barbara on Saturday with Scott Summersgill. He reported, “We metered a mess of fish on Saturday in little packs of 10 to 15 fish. They where eating 8-12-inch mackerel on the dropper loop as well as the heavy iron. A lot of fish in the 20-pound class, but there was a few bigger fish with them. I hooked an angry one on the iron. It pulled 60-feet of line on a buttoned down drag, found the rocks and earned its freedom. I was fishing a stout 50-pound yoyo outfit but it was not enough. By far the biggest yellow I hooked this season”. These bigger yellowtail are showing up on the rockfish grounds in the Santa Monica Bay on a consistent basis as well. The occasional fish is also being caught off Long Beach, but the next major concentrations are below Dana Point and off San Diego. If you’re looking to get in on this yellowtail bite, you’d better be ready to spend a day driving around looking. These are small schools in deep water so you’re going to need to have your eyes glued to your fish finder and your yo-yo jig in hand and ready to drop if you’re going to get a shot. I spoke to a few guys that fished San Clemente Island over the weekend and all of them reported a lack of conditions and a lack of biting fish. Closer to home, my friend Brandon Vulgamott bounce balled for halibut with Josh Boudreaux out of Dana Point. Their Sunday morning trip resulted in limits of big halibut. Looks like we’re going to have another weekend of good weather, so get out there and catch some fish!