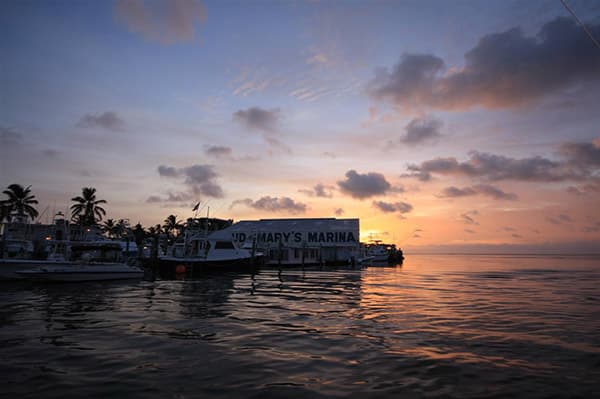 I’m not exactly sure when it first happened, but a few years back I became obsessed with catching xiphius gladius, aka the broadbill swordfish. I’m not really sure what the attraction was. Maybe it was the mythological status among West Coast anglers, or maybe it was presenting bait to several “tanker”-class fish only to have them ignored. Whatever it was, I’ve got “purple fever”. 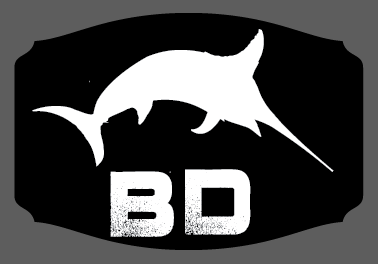 Several years ago I began saving any magazine article, forum discussion or any other tidbit I could gather related to catching swordfish. During this time I was fortunate enough to spend time with several legendary local captains like Pete Groesbeck, Steve Lassley and Mike “The Beak” Hurt. Combined they have many West Coast swords under their belts. I’d begin conversations with these captains with “I’m going to ask you a million questions. When you get tired of me, tell me to go away. No hard feelings I promise!” Fortunately these guys embraced my enthusiasm and really opened up to me and told me what they could about the West Coast swordfish. From my research, I figured there were two methods that were most likely to lead to success on a repeatable basis. These two methods are night trolling and daytime deep dropping.

After several night trolling trips, my crew and I became frustrated with the kelp and other crap we would snag while working current edges. While I still feel this is a viable method that needs more fine-tuning, I couldn’t help but notice the consistent success that South Florida anglers were having with daytime deep dropping. This was especially true of the pioneers of this style, the Stanzyck family.

The Stanzycks own and operate the famed Bud N’ Mary’s Marina in Islamorada, Florida. I knew our editor had a relationship with them and I asked him to reach out to Nick Stanczyk to see if we could set up a trip before the Icast show in Orlando. After all, The Florida Keys are ONLY six hours from Orlando. I had to get down there and see first hand how these guys were doing it. After a few quick emails with Capt. Nick, the trip was arranged and we’d be spending a couple days together trying to catch my first keeper sword while picking the brain of one of the pioneers of daytime deep drop fishing. 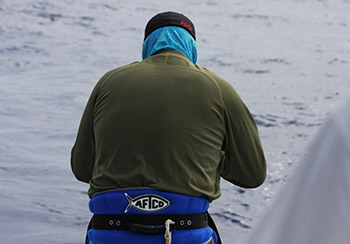 It didn’t take much to drag BDO’s Creative Director, Derek Redwine, and our good friend Mike Nicholas from Cocoa Beach down to the Keys with me. After doing a little touring, we settled in to our hotel room and touched base with Capt. Nick. The weather looked good and the fish had been biting.

The next morning we made the short trip to Bud N’ Mary’s, grabbed some food from their deli and took off for the grounds. After a quick twenty mile run Capt. Nick gave us a detailed run-down of his program. This included a 100-foot-long leader attached to a 12# break away concrete weight with one Lingren Pitman light placed where the leader met the mainline and another light 20′ from the bait. The bait was consistent with most techniques: a squid, dorado or bonito belly sewn to 12/0 Mustad J-Hooks. 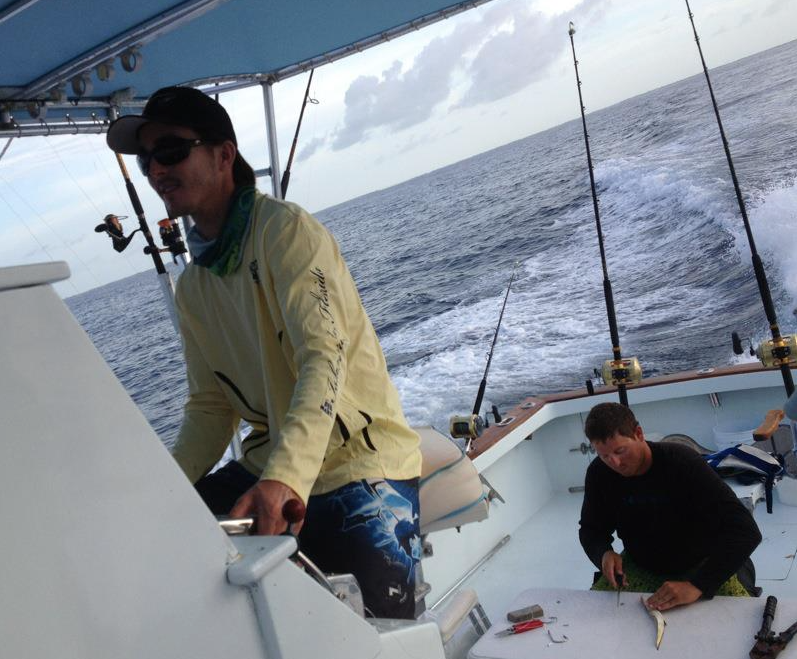 This rig is deployed using an 80-wide reel loaded with 80# spectra on a matching six and a half foot bent butt rod. Luckily, they have a cordless drill (and several batteries) with a special attachment to retrieve the line if you don’t hook up.

Due to the fast moving currents in the Gulf Stream, Capt. Nick deploys the bait while driving up current (to keep the rig from tangling) and then turns the boat down current once it’s about halfway to the bottom in 1200-1600′ of water. This lays the long leader out cleanly underwater and then allows it to sink to the depths.

Once the bait hits the bottom it’s brought up anywhere from 50-200′. This is where the real work starts.

As the angler, you sit on the gunwale, sometimes for hours and watch the rod tip for the slightest motion. The bite is normally very subtle. Sometimes it’s just a small twitch in the normally rhythmic motion of the rod tip as the boat rolls. Other times it can be a sudden and strong steady pull. Of the 9 bites we experienced, it was the latter: just a little tick or slight bob in the rod tip.

I completely missed the first couple bites, expecting a massive drag-pulling run similar to a tuna. When we did get bit, it was normally a clumsy effort with the fish taking several whacks, presumable with the bill and missing the hook. At this point we tried to “tease” the fish by reeling line up frantically to take the bait away and then dropping the bait back down for the same effect. If the fish didn’t come tight, we’d repeat this several times. 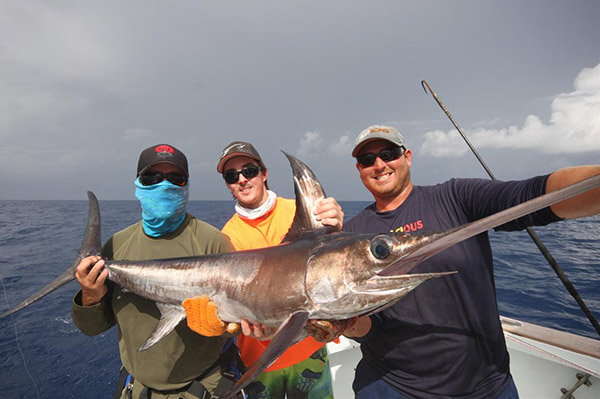 With my beginner’s luck on day one, we managed to go 3 for 4 bites. Two of the fish were rats in the 50# class and we got one decent keeper fish that weighed in at 92 pounds.

Once these fish were hooked, they tended to surface quickly and the race was on to keep the line tight. I had to reel as hard as I could to have any chance of keeping the hook in the fish. Fortunately the belly in the massive amount of line deployed aided in my efforts.

After a relatively short battle, the fish would come up behind the boat and “wash the windows” with its bill and one of the smaller fish even jumped clear of the water and tail walked a bit. It was really cool to be able to see the fish hot and lit up during the day and snap some great photos. The smaller fish were quickly leadered, pulled aboard for a quick photo op and released to fight another day. The larger 90# fish was brought to leader after a 20 minute tussle and met with a couple of gaffs. 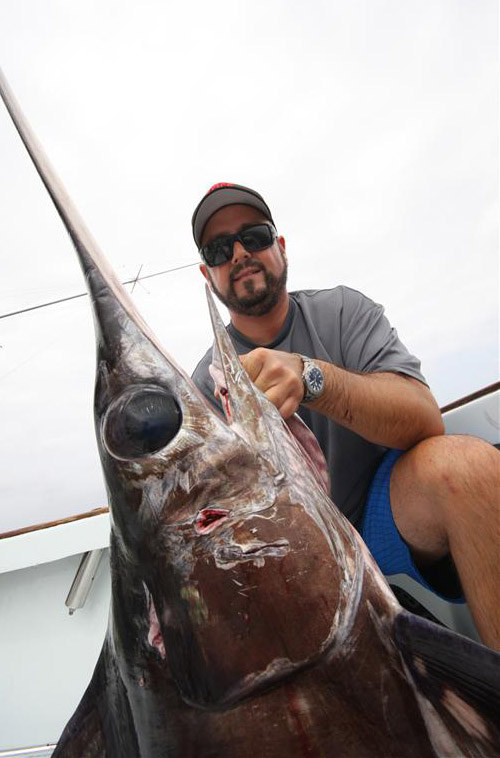 After a few photos we all celebrated our mission accomplished with a few cold beers. Later that night we had the fish cooked up at a local grill and it was nothing short of amazing. I’ve eaten very fresh swordfish many times, but this fish was much richer and sweeter than the others I had eaten. I’m not sure if it was the fish, where it was caught or just the fact it was the first swordy I had taken, but it was awesome.

The next day, the beginners luck had worn off and with plenty of bites, we struggled to connect. After a long hot day in the sun, it was my turn again and I got bit by the right one. This fish bit much harder than the rest and begin to pull drag at 1600 feet. Right then, I knew we had the fish we were really looking for. Unfortunately after a brief 15 minute seesaw battle, the hook pulled.

After talking numbers with Capt. Nick, this happens more often than not. By Nick’s estimation, they hook about 1 in 4 bites. Once hooked, they have about a 50% chance of landing the fish. That’s about 1 in 8 bites landed or a .125 batting average. Not great, but fortunately you’re generally presented with multiple opportunities per day. Nick feels this is in large part because of the clumsy feeding nature of the swordfish. 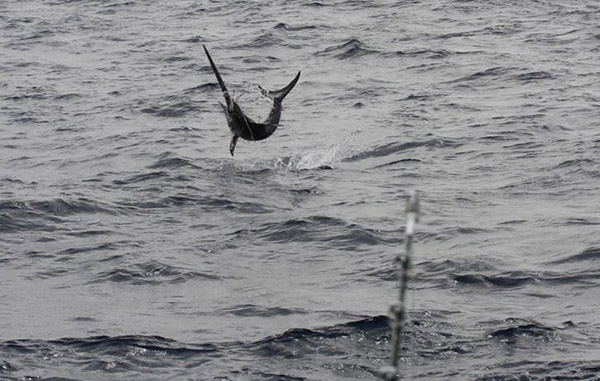 Unlike most of the other large game fish, the swordfish doesn’t inhale the bait and then turn and run. Instead they slash at the bait with their bills several times before they actually try to eat it. These slashes are what we were seeing with the rod tip as very slight movements. Many times this results in bad hook placements like the side of the head, top of the head, dorsal fin and pectoral fins

All in all we had a great trip, caught some fish and made some new friends. For me the primary reason was to learn. If we want to tap into this fishery in SoCal waters we really need to study what other guys are doing in different parts of the world. Clearly, each fishery is definitely different and has its own refinements, but the fish is the same.

I truly believe the biggest thing lacking in the development of the West Coast sword fishery is effort. Each year a few boats take a few trips for swords using one method or another, but no one has dedicated enough time to truly “crack the code.” 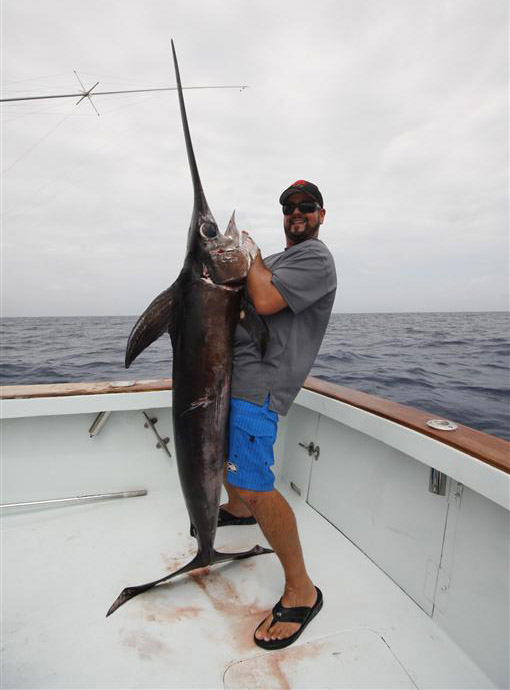 I plan on doing much more of the daytime deep dropping and night time trolling this season.

I’ll be sure to share our techniques and what we learn here and in the BD Outdoors forums. Hopefully we can inspire a few more dedicated anglers to help crack the code of the mythological West Coast broadbill swordfish.