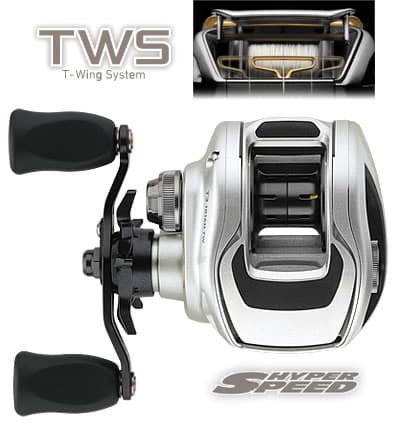 Levelwind reels present a helpful tool when it comes to laying line uniformly on the spool as an angler reels it in. But, that same levelwind can be a major nuisance when you cast. The line can hang up in it, interfering with distance and accuracy. To help anglers get the most out of every cast, Daiwa came out with a unique levelwind mechanism called the T-Wing System.

At the heart of the T-Wing system is a unique, T-shaped line guide aperture, designed to reduce casting friction, yet provide a precise levelwind upon retrieve.

According to Daiwa, when using an ordinary levelwind reel, line coming off the spool is forced to bend at a sharp angle to pass through the narrow line guiding aperture during a cast. If the line can’t freely flow off the reel, it creates casting friction. This is especially noticeable when the line guide on the reel is parked to one side during the cast.

With the T-Wing, line flows freely through the wide upper portion of the “T” with minimal friction. Tests against some of Daiwa’s own top casting reels showed a distance increase or more than five percent. They also saw the lure drop rate after splashdown improve by 12 percent. Upon retrieve, line is channeled through the narrow, lower part of the “T” for precise distribution onto the spool.

Keeping that extra casting freedom under control is a new, magnetic anti-backlash mechanism called Magforce 3D. Like Daiwa’s current Magforce V system, it automatically applies smooth magnetic braking that adjusts itself as the spool speeds up or slows down. The 3D system adds to that even finer control with a simple three-position switch with settings: All-Around for a wide range of normal use; Max for rapid breaking when casting into a wind; and Long Cast with minimum breaking for longer casts.