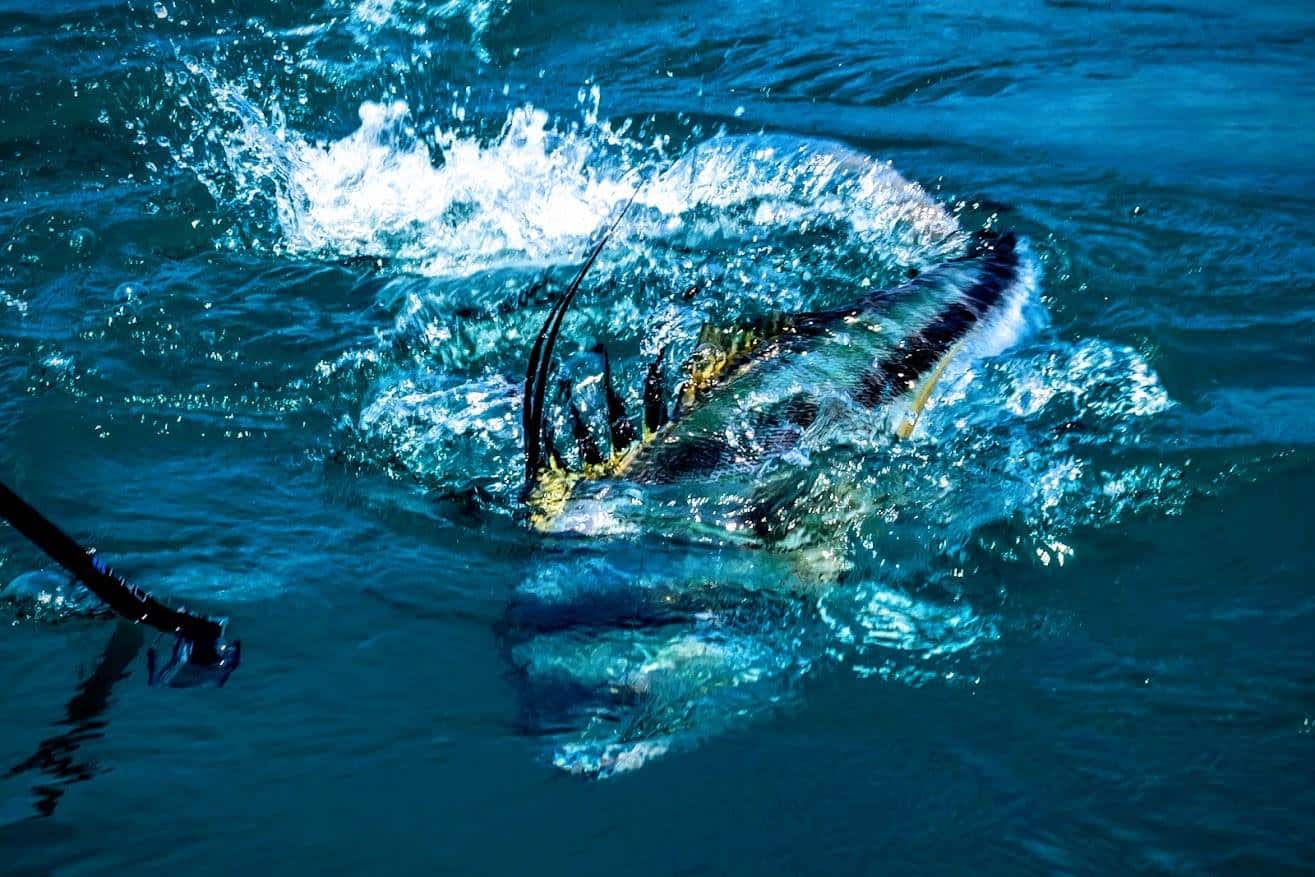 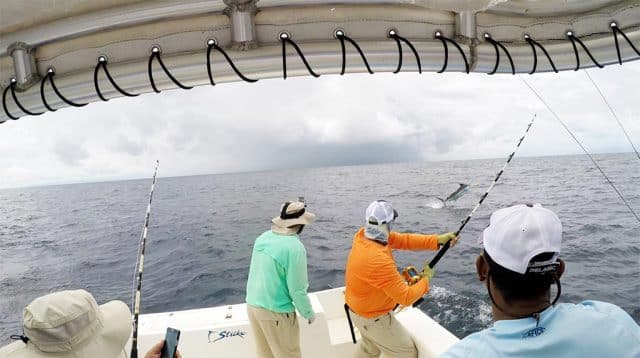 Well, it is summertime and things have begun to heat up at Crocodile Bay Resort, Costa Rica. Inshore the fishing continues to be great, with steady rooster numbers and a few surprises mixed in. Offshore the blue water has moved back in, and with it, so have the tuna. There are a few sails around and some marlin coming up.

Here are a few highlights from some of our anglers. 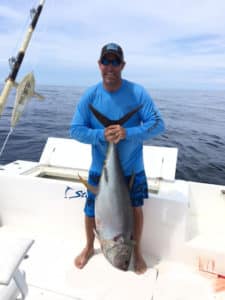 Clay Schreder from Montana, came down last week with a group of ten. They got into the tuna, and Clay had this nice yellowfin take a live bait. Robert and Robert Jr. Bartosh from Georgia came to visit us last week. They hit the water for some roosters, tuna, and snappers, but then were surprised by a barrel fish. Barrel fish are usually caught in very deep water, 800-feet or more and are not common here. They fight from the moment you hook them till they come to the boat and are excellent table fare. 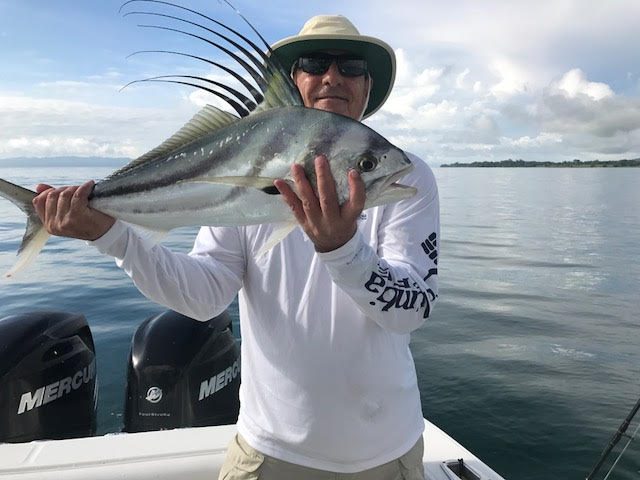 Andy Lowe from Texas has been fishing solo for the last three days. He told me the first day, he just wanted to catch a roosterfish. So far he has landed twenty five and kept his dinner plate stocked with pompano and snapper. On Friday he took a break from the roosters and released a nice cubera snapper after a great fight. He said ” the cubera just kept running into the rocks, but I finally got him out.” Yesterday, Andy was back looking for roosterfish, when he got a “different” bite. He hooked an estimated forty-pound tarpon, that jumped several times before throwing the hook. We catch maybe one or two tarpon a year, and it is always a surprise when it happens. 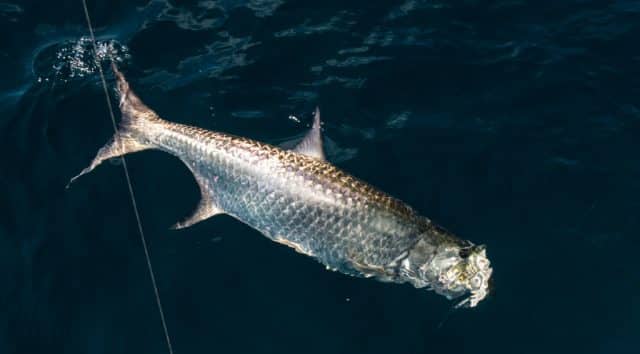 Tarpon are not native to the Pacific side in Costa Rica. Scientist believe that a few tarpon cross from the Caribbean into the Pacific, through the Panama Canal. They are not in targetable numbers, but make for a great bonus if you are lucky enough to get one. 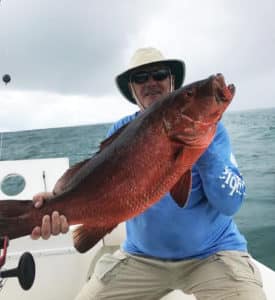 Mr. Lowe fished again today and hooked and landed several roosters and snappers, before getting two more unusual catches. The first was a six foot lemon shark and the second was an estimated eighty-pound manta ray. Both were long fights and needless to say, he came back a little early, tired and sore, but a happy angler.

Andy Lowe was kind enough to share a recap of his “Bucket List” fishing experience at Crocodile Bay Resort, Costa Rica – Here is what he wrote:

“Crocodile Bay fishing was outstanding!!! Love the cornucopia basket of fish caught! “Just like a box of chocolates, you never know what you got ’till you bring it up”! 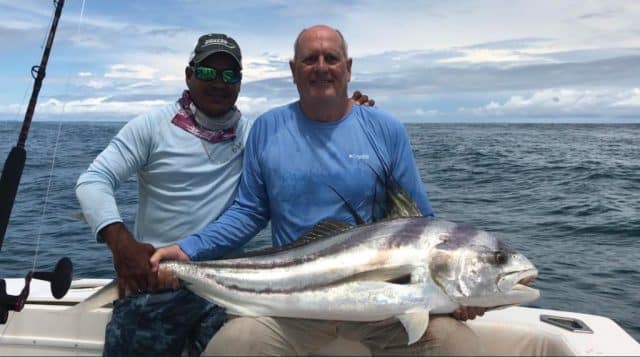 Crocodile Bay would like to thank Andy Lowe for sharing his Crocodile Bay Resort fishing experiences with us and we all wish him a Happy Birthday this Sunday! We will be adding his monster Roostefish (pictured below) to our Wall of Fame. Can’t wait for you to visit again soon you can see for yourself! 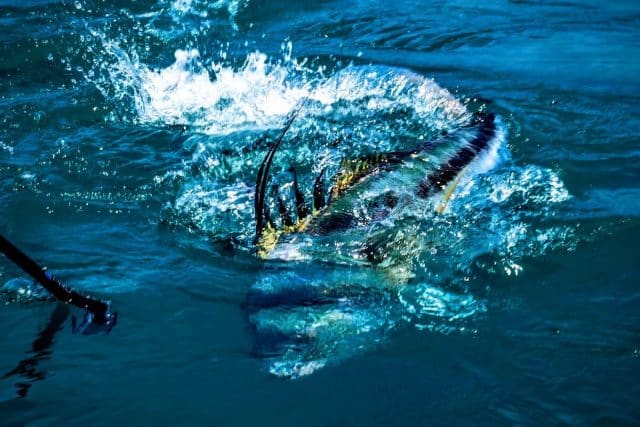 Offshore, we have been finding tuna most days, mixed in with the schools of dolphin. We saw a few sailfish this week and raised a couple of marlin. With plenty of bait offshore, the marlin bite should only improve as we move further into July.

Author’s Note – Just a day after this report was written, we released a nice Pacific blue marlin (see image on top of page)

Learn more about the fun you could have at Crocodile Bay Resort.