If you want a fishing boat that can do it all, the Crevalle 26 Bay will be tough to beat.

The Crevalle 26 Bay was one of our five picks for Bay Boats That Can Handle Bluewater, and after spending some time aboard this boat, it’ll be little wonder why. True, at its core this is an inshore fishing machine which draws a mere foot of water and has a moderate 16-degree transom deadrise. But when running the boat, we found it was built as rugged as they come, provided a surprisingly comfortable cruise, and with an 83-gallon fuel capacity and a best cruising economy of 3.1 miles to the gallon, has a range of over 200 miles with a 10-percent fuel reserve. So, when the weather’s right and time allows, nothing will stop you from punching through the inlet and setting your sights on offshore pelagics. 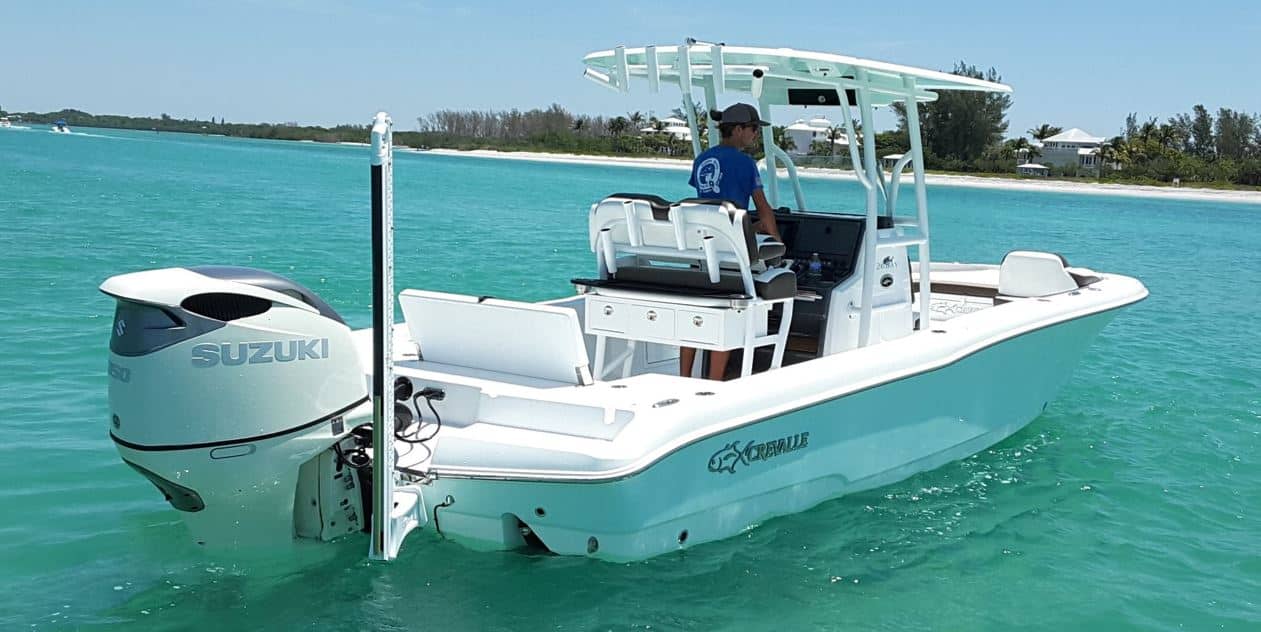 Naturally, there are a lot of angling options between trout in the backcountry and the tuna waiting well offshore. You want to target cobia along the coast? Get the boat with the optional half-tower and/or upper-station, and this rig will once again prove ideal. Kingfish are chewing up pogies 12 miles out? Make sure you’ve added the angled king-style rodholders to the hard-top. In fact, aside from a lack of outriggers (though we’re guessing you could add ‘em yourself without too much hassle) there are very, very few fisheries that can’t be attacked with the Crevalle 26 Bay.

Despite the boat’s versatile nature, it is, of course, set up specifically for light tackle inshore fishing. The foredeck is a huge casting platform, and the aft bench seat folds down to turn the stern into an aft casting deck, too. Livewell capacity is tremendous and well thought-out, with two 28-gallon release wells in the aft deck, one to port and one to starboard. They’re oval, baby blue inside, lighted, have multi-level inflows, and a shielded drain that means you won’t have to fight with or net around the stand-pipe. The wells are fed by dual Attwood 800 gph pumps, are oxygenated with venturi aeration bubblers, and the hatches are gasketed.

Well number three is built into the forward console seat. This one has an opening wide enough to drop in your cast net, a side-mounted overflow so again you don’t have to fight a stand-pipe, and a double-gasketed hatch. In short, the boat’s livewell systems are as good as modern technology and design can provide.

The same can be said of the rod stowage on the Crevalle. The starboard foredeck houses a large stowage compartment with rod-racks built-in – including tubes to protect the tips –for five rigs. You can double that capacity by having a rack put into the port side as well, though if the boat’s rigged for maximum rod stowage, fish stowage will become a bit thin. (There’s a cooler housed under the leaning post and another under the aft bench seat, but they’re sized more for bluefish than bluefin). There are also under-gunwale racks, and additional rodholders in the gunwale, the back of the leaning post, and on the T-top.

More about that top: like the livewells, it’s as good as they come. Maybe even better. One potential knock some may have is that the pipe feet hit the deck as opposed to securing to the console, which can be a toe-stubber. That said, however, grab the back of the top and do some chin-ups and you’ll find it’s as stout and well-secured as they come. Then check out the design; spreader lights, courtesy lights, stereo speakers, and an electronics box are all molded in. Hold the phone – there’s even a Misters system incorporated right into the top. That’s pretty special, but it’s when you actually wrap your hands around the pipework that you realize something even more special is going on. It’s grippier than usual, and somehow feels more comfortable to hold. In fact, the sensation was so odd that when I experienced it, I actually took out the cell phone, called the factory, and spoke directly with a Crevalle rep to figure what was up with those pretty pipes on our test boat. It turns out that when they powder-coated the top they had then applied a clear-coat, overtop the powder paint. This was done to protect the paint (powder coat paint can be difficult to repair if it gets chipped or damaged), but as it turns out, also has the added benefit of that grippy, comfortable feel.

In case it hasn’t come across just yet: yes, we were pretty dang impressed with this boat. And when we took it for a spin that didn’t change. True, we didn’t quite hit the 50-mph mark. But that was because the boat was over-propped a bit. WOT with the 300 hp Suzuki V6 outboard was a solid 900 rpm shy of the max recommended, so with the correct propeller speeds in the low to mid 50s should be no problem. In fact, Crevalle has a performance report posted with the same powerplant spinning right in the middle of the max rpm range, which recorded a top speed of 54 mph. If you want even more juice, opt for a Suzuki DF350A, which they claim nets a top-end of 57.

If you want to see the boat in action, there’s a FishTalkMag video review of the 26 Bay which shows the GPS and fuel flow, while running at a few different cruising and WOT speeds (as well as going through the features of the boat). What you can’t see on video, however, are the rather impressive construction methods used in this boat. Some examples include a fuel tank that’s coal-tar epoxy-coated, so longevity is ensured; the use of vinyls which have Syntec NTB antimicrobials to ward off mold and mildew; tinned-copper wiring with Deutsch-style connectors and heat-shrink terminals; and a single-piece foam-filled stringer system. 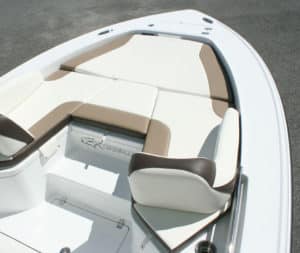 Okay: we’ve talked a bit about the construction, design, and features of the boat. We’ve touched on its performance. One might think that at this point, there isn’t anything else to talk about. One would be wrong. We still haven’t mentioned the fact that despite it’s fishing orientation, the Crevalle does also have some comfort-inducing features to brag on beyond those T-top misters we mentioned earlier. There’s a cushion set that turns the foredeck into a sunpad, and removable backrests (while they are a pain to stow) can be added to make it a lounger for two. There’s a tight but useable head compartment in the console. And there are bolster seats at the helm with swing-down armrests plus cup holders.

You say you want a kick-butt bay boat that can make oceanic runs when the conditions allow? Different boats are best for different folks, but if this is the type you’re looking for you’d be nuts not to look at the Crevalle 26 Bay, before signing on any dotted lines.