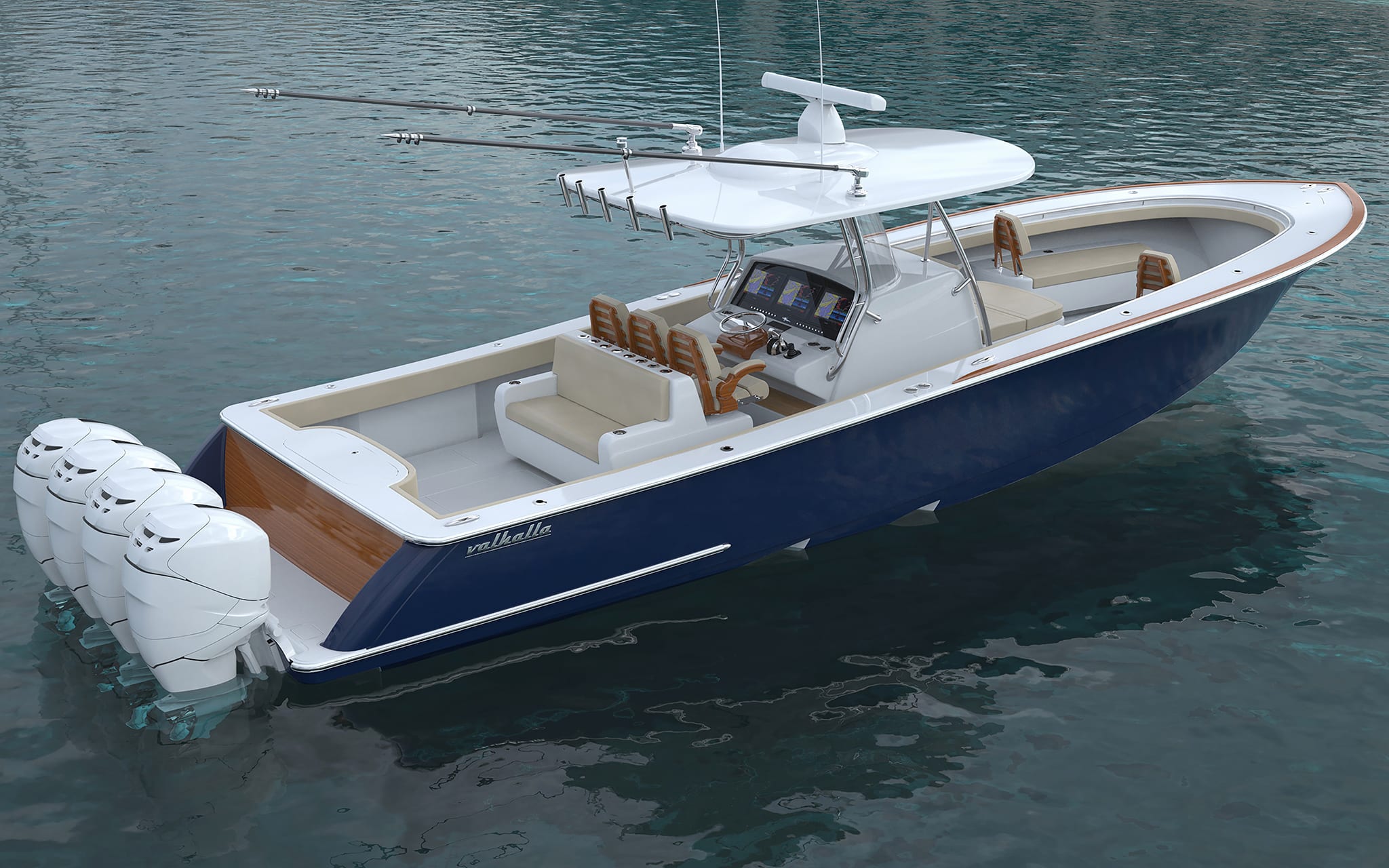 We checked out the crop of hot new fishing boats introduced at the Miami International Boat Show. Here are three you’ve just got to know about: the Regulator 26XO, Scout 530 LXF, and Valhalla From Viking.

Every year major manufacturers plan the introduction of their hottest, newest models for the Miami International Boat Show, and as we walked the docks and checked out all the center console fishing boats, convertible sportfishing machines, and express fishing boats, we weeded through row after row of gleaming fiberglass to spot the stand-outs. Truth be told there were dozens upon dozens of sweet new hulls bobbing around the docks, and picking a handful to call out was no easy choice.

These three, however, made their mark – and every angler alive will want to know about ‘em.

Regulator 26XO has a well-deserved reputation for turning out no-nonsense deep-V center console fishboats that are designed for making long runs to distant fishing grounds without beating you up. For 2019, however, they unveiled a completely new creation: the 26XO. This is their first shot at a crossover boat intended for both bay and ocean fishing. It has a 17-degree hull that drafts just 1’2” at rest, fore and aft casting decks, and can be rigged with a bow-mounted electric trolling motor for inshore use. But it also has a proud bow, the hefty construction, and the fuel capacity (107 gallons) to make oceanic runs when the weather’s cooperating.

While on the docks I had the luck to bump into Regulator’s President Joan Maxwell, and when asked why they decided to build a boat so different from their usual offerings, she had a simple answer: People kept asking for it.

One thing we noticed when we stepped aboard was the enhanced stability of the semi-V hull. Walking from side to side there’s minimal motion, and standing atop the bow casting platform you have to really work at it to rock the boat. We also noticed that the engine was rigged with a jackplate (it’s a standard feature), and the leaning post houses a 32-gallon livewell plus a tackle station which will satisfy both the bluewater crowd and inshore anglers. The 20XO is unusual for a Regulator, no doubt – heck, you can even get bow cushions to turn the foredeck into a lounge – and it’ll be of interest to fishermen from coast to coast.

Before even being officially introduced at the show, Scout already knew they’d be sold out for the entire first year’s production of this boat. Center console yachts like this have been incredibly popular ever since HCB Custom yachts started the genre with the Suenos, followed up with the 65 Estrella, and then Grady-White entered the fray with the Canyon 456.

Not to be out-done, Scout Boats decided to top their own 420 LXF by developing this monster 53-foot center console to run at a cruise of 40 mph and boast a 57-mph top-end when powered by five (yes, FIVE) Yamaha F425 XTO Offshore outboards.

This model incorporates the height of boat construction technology, and features an epoxy-infused hull with carbon fiber and E-glass. More tech touches include a completely digital control system with digital switching via a massive Garmin interface, and a standard Seakeeper gyroscopic stabilization system.  Other perks include a forward cockpit with a massive lounger on the console cabin top, an integrated hard top/windshield with a monstrous electric sunroof, and a mini-bar complete with an electric grill and swing-out barstools aft of the helm-deck.

The third big item of interest we need to draw your attention to doesn’t quite exist – yet. Despite not having any boats at the show, the new center console line called Valhalla was the talk of the town, because these are outboard-powered center consoles from the epic builder Viking.

The Valhalla line features a twin-stepped hull design with a 24-degree deep-V, consoles with frameless wrap-around windshields, transom livewells, in-deck fishboxes, and rod stowage plus a head in the consoles. Most importantly, however, they will be built with Viking-level quality and craftsmanship. The V-33, V-37, and V-41 are due to launch this fall – and we can’t wait to see ‘em up close and personal.

Well there you have it, folks: another Miami International Boat Show has come and gone. And as in years past, 2019 didn’t disappoint.

These hot new fishing machines are just the tip of the iceberg – stay tuned as we bring you reviews of the latest fishing boats to hit the water.