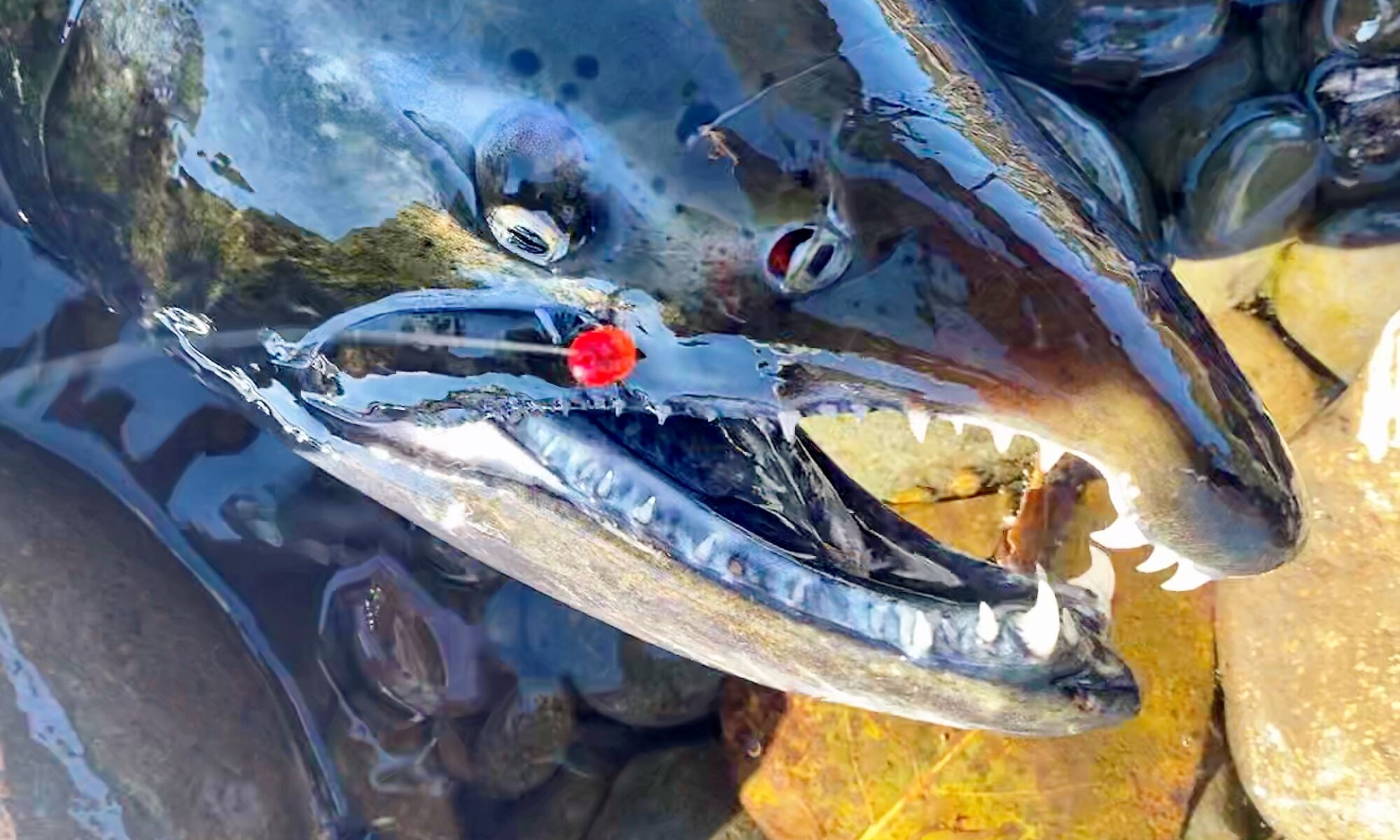 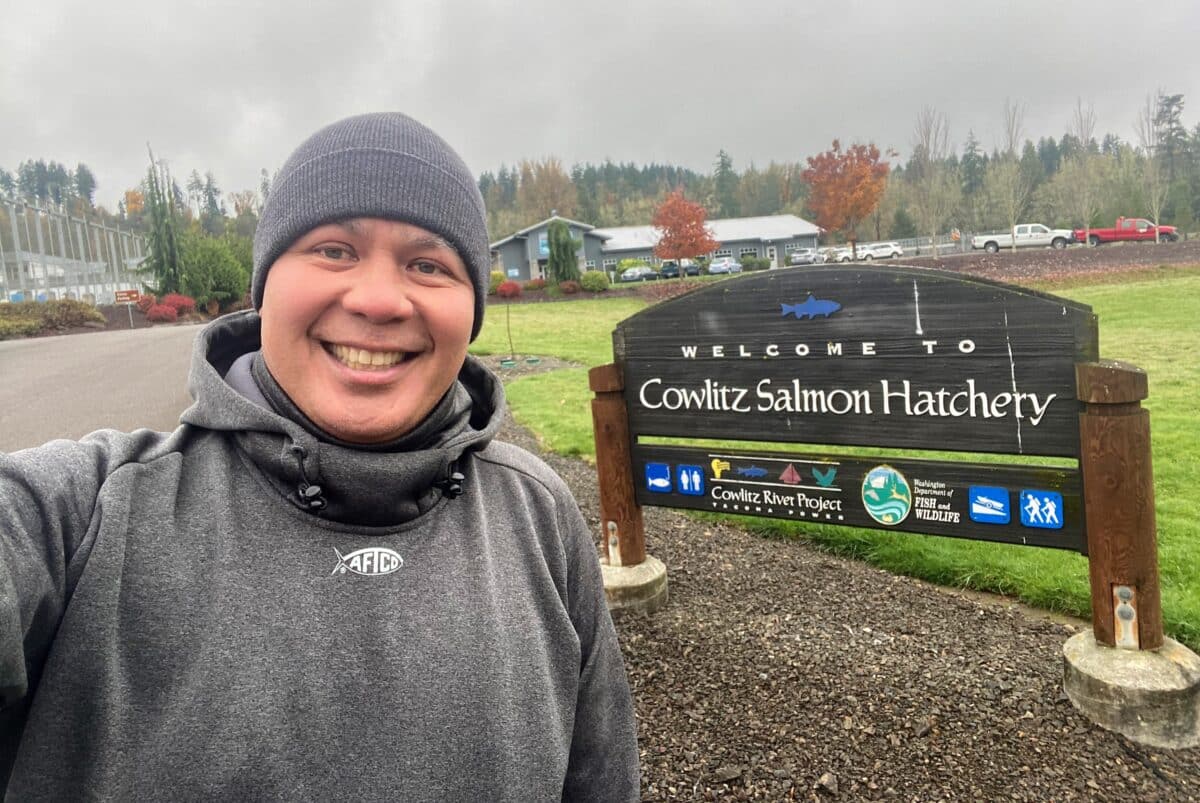 Last Monday (November 2nd), I drove out to my buddy, Ken Kim‘s house in the pre-dawn hours.  You’ll remember from last week’s post that Ken had planned a “venture out” spot for us to fish.  I’ve adopted Ken as my salmon guide up here for this quest.  He knows I want to catch a crazy looking pre-spawn chum salmon, so I’ve placed my trust in him to help me make it happen.  Still, I was curious about where we would be going, at least to prepare gear-wise.  “Same flossing tackle that you have.  I’ve got a better rod for you to use…just bring your reel if you don’t want to use a lefty.”  He could see I still wanted more information. 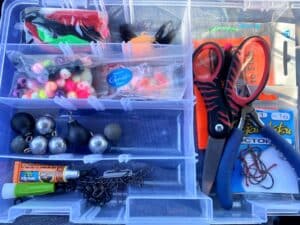 “Trust me.  Lots of picture fish.”

Monday morning, Ken was waiting by his car for me.  It didn’t take long to transfer my gear to his car.  I only brought waders, my reel (Tranx 300 with straight 15# mono), one tray of tackle (right), and my GoPro.  After a quick stop for gas and coffee, we pointed south on I-5 and headed off to our destination.

It was about a one and a half-hour drive before we exited the freeway and another 20 minutes or so before we reached the spot.  We were at the Barrier Dam area on the Cowlitz River, near the salmon hatchery there in the town of Salkum, Washington. 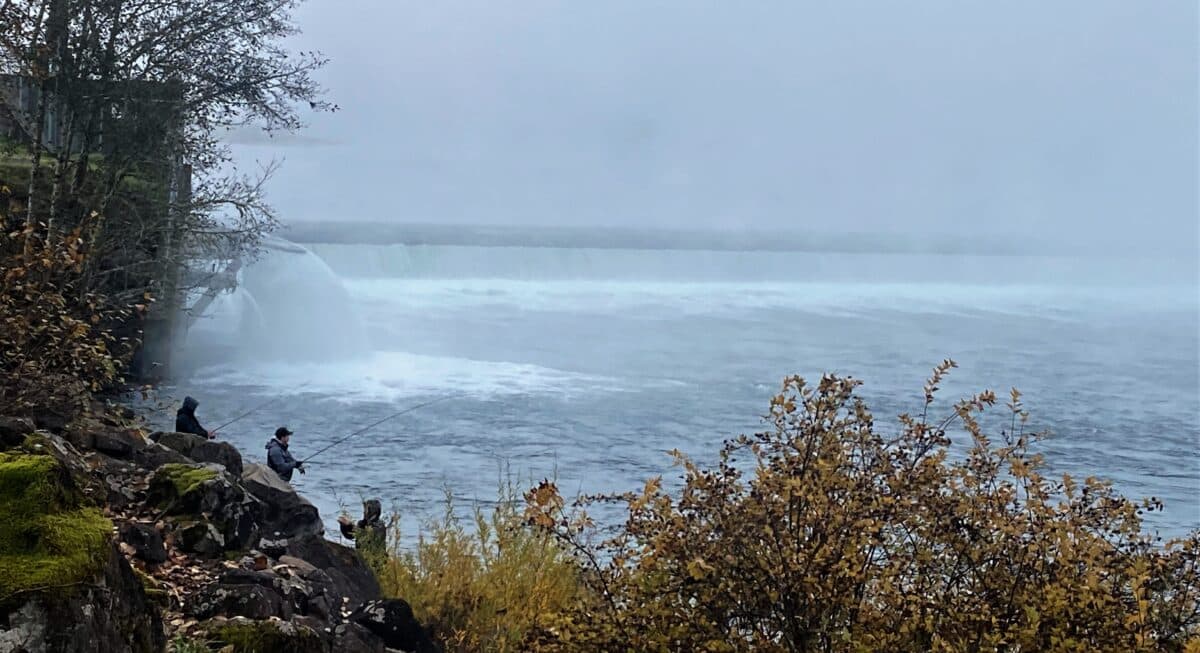 We parked and got out of the car.  Ken told me to leave the gear and just follow him.  We walked toward the river and stopped at a vantage point where Ken gave me a lay of the land.  “Up there above the dam is the hatchery.  This spot is the end of the road for the fish.  Here is where they spawn and die.  You’ll see a wide variety of fish.  Some will be ghosts and barely alive.  Others will be zombies, post-spawn fish just wandering around without a purpose.  Those guys over there are all fishing bobber setups.  We could go down and fish there, but they’ll get aggro because we’re flossing.  We’re going to go a little further down.  It’s better for us and less zombie fish.”

We got back in the car and drove downriver maybe a 100 yards.  After unpacking and rigging up, Ken led me down a trail toward the river.  At the end of the trail, I was pleasantly surprised to find a dry, rocky riverbed area, separate from the wooded area along the trail.  Unlike last week’s Bumhole spot, there was ample backcast area.  There were a few anglers there already, but plenty of room to stake out a spot of our own to fish. 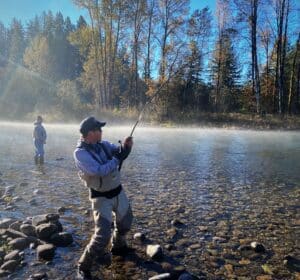 We started fishing and it wasn’t more than maybe 15-20 minutes before Ken hooked up.  The fish took off downstream.  Ken was pulling hard, but between the fish and downstream current, it was a tough fight.  Occasionally, the fish would jump, serving to show us just how far away it was from being landed.  The anglers downstream were gracious and got their lines out of the water.  Ken followed the fish past them all and eventually ended the fight at the sand bar before the river bend.  It was a dark green colored chinook/king salmon.  Great start to our day!

On my end, not having to think about casting allowed me to ramp up faster and just focus on the fishing.  Ken would later tell me that I wasn’t setting on potential bites.  I was getting enough of a feel for it though that I was able to feel one bite.  I set on it.  At first I didn’t feel a response and thought I had hung up my weight in a rock.  Then it started to pull back.  Fish on!

Wow!  I know a lot of it was fighting the river and not the fish, but I was still impressed with the fight. 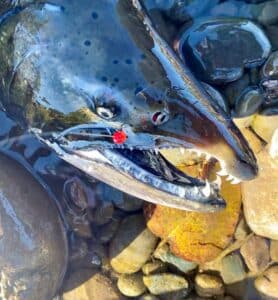 When I caught salmon earlier in the year off the pier (where I met Ken), the fights weren’t long, and landing them was more about finesse than brute force.  I took that mindset into this mission, but boy was I wrong.  I let the fish pull out a lot of drag and it was able to leverage the fast current in the middle of the river to take me down to within a few wraps of line on the spool of my reel.  Ken was yelling at me to pull harder.  I tightened down the drag and got more aggressive fighting it.  I started getting line back and Ken coached me to guide the fish toward the side of the river.  Once I got it out of the main current, things went much smoother.  It was a chinook that had almost fully transformed to it’s spawning state.  The body color was long past chrome.  The dark green was giving way to a blood red color and its mouth had the full hook to it.  And those teeth!  Too cool.

Here’s an abbreviated video of this catch…

Once I got past the exhilaration of catching that fish, I asked Ken if there were any chum in this mix too.  He told me no.  Because of the spawn, we couldn’t keep kings.  If we happened to catch silvers/coho, we did have the option to harvest it.  Ken told me he just wanted me to experience catching one in this fashion, so I could get a better feel for what it felt like.

After our quick morning success, it got a lot slower.  It was obvious there were fish around.  Every once in a while, one would pop out of the water right in front of us.  We just weren’t connecting with them.

Around noon, there was another flurry of activity.  Ken managed to get 2 more fish.  I got one…all kings.  At this point, a leak in my left wader boot had my foot cold and wet.  I was ready to call it a day.  Ken agreed and we were out.  We took a quick look at one more spot, but Ken wasn’t happy with what he saw, and that the end to our day.

I was super stoked about how the day went.  The opportunity to catch my target fish wasn’t there, but I came away from the experience with a better understanding of how this style of fishing worked.  Along the way, I got to see up close what these majestic fish looked like in their final state.  Very cool experience.  Hopefully, I can take the lessons learned from this session and apply it to a successful chum catch this coming week.  Stay tuned.  Good luck if you get out there.