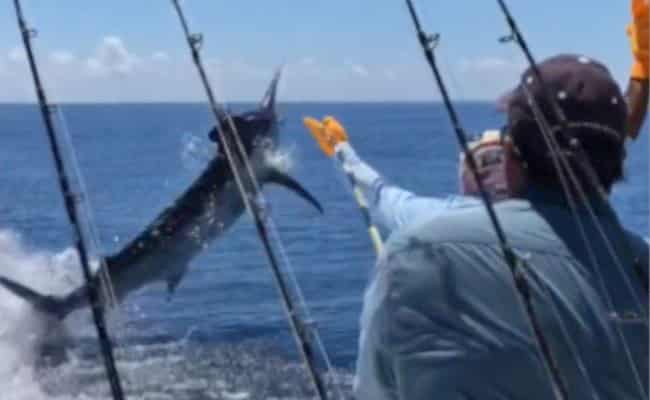 It has been an interesting couple of weeks with some very noteworthy catches. Rick Miller and his adult son Rick Jr. were down last week. They won the trip at an IGFA auction. They spent their first few days inshore chasing roosters, then decided to make a change and see what was happening offshore. After a couple hours trolling, they were surprised by a very large black marlin. Rick Jr. fought the fish on stand up gear for two and a half hours before finally landing the brute. It was an unusual catch in that we don’t see many black marlin, and the ones we do see are usually caught in July or August . Congratulations to Rick on a hard fought battle and a great catch. 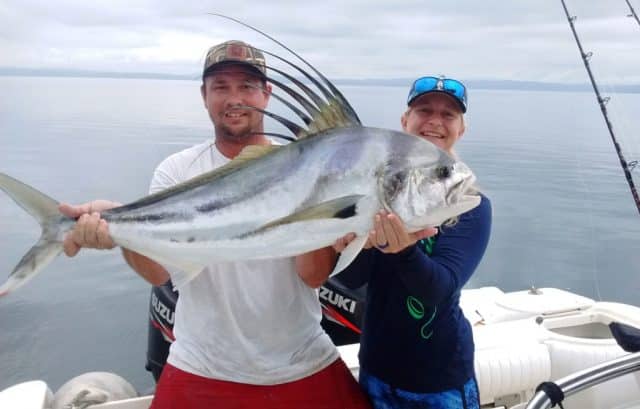 Tara Whitehead is another angler who was surprised this week.  Tara and her husband Jason are here fishing on their honeymoon. It was their last day fishing and they were hoping to finish up with a few more Roosters, when Tara hooked 100-pound +tarpon on a live sardine.  It was a grueling, almost two hour fight,  but finally the mate was able to grab the leader and release the fish. Though tarpon are commonly caught on the Atlantic side of Costa Rica, they are rare in the Pacific. We catch just a few every year that have crossed from the Atlantic to the Pacific Ocean via the Panama Canal. Congratulations to Tara, she is now part of a small group of anglers that have landed Atlantic tarpon in the Pacific.

Christine Basset, is another angler who brought her lady luck down and landed a beautiful 65-pound + dorado. Though we catch many quality dorado,  Christine landed a real trophy.

May 1st  marks the one year anniversary of my running the fishing department at Crocodile Bay Resort. I would like to thank the captains, mates and mechanics for all of their hard work. We have a great team at Crocodile Bay and when firing on all cylinders, they make my job easy.  I would like to also thank all of our great guests this year. Meeting with you and hearing about your experiences on the water is the best part of my job. My responsibilities do not allow me to fish very often, but I do live vicariously through you and your wonderful stories. Thank you all  for a great year.

Visit Crocodile Bay Resort to plan your adventure or learn more about this stunning area of Costa Rica.