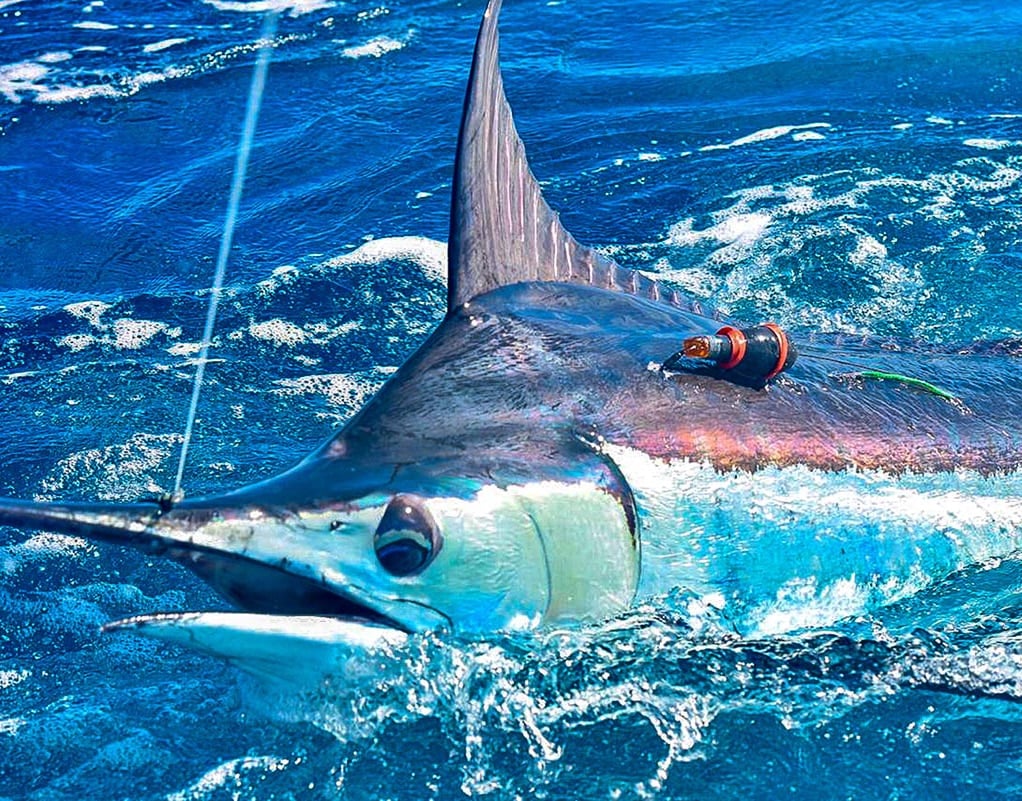 The question is, are the blue marlin in Costa Rica being caught well offshore in the rainy season the same body of fish that we are seeing well inshore in December/January? 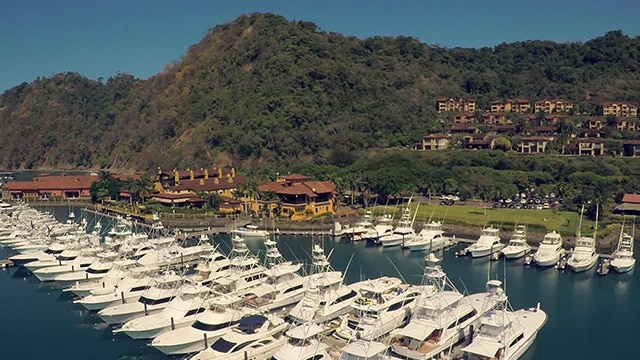 When we first began asking this question, many people agreed this was a hot point question, and we should try to study this together. The first mention of this work was to Will Drost from Maverick Sportfishing out of Los Sueños Marina. We had worked on this question for over a year and recently, “the stars lined up” for our team on the most successful and amazing trip so far.

Gray Fish Tag Research is an international, fully interactive fish tagging program powered by the world’s largest network of fishing professionals consisting of approximately 10,000 charter boat captains and mates. It is an essential tool for promoting the sustainability of marine game fish and increasing public resource awareness.  The program collects information in real-time, producing valuable scientific data, directly from fishermen in every part of the world — connecting professional fishermen and angling enthusiasts with the scientific community who is desperate for relevant data.

Will Drost from Maverick out of Los Sueños Marina’s new 50-footer would soon be ready. He wanted to buy a Sat Tag and go to the seamounts with our GFR team to deploy it and together try to answer this question.  Within a week, Will sent the funds, and a tag was ordered. Once Board member Dick Tanner heard about this program, he immediately offered to buy the second tag. Throughout the high season, we waited and eventually set the date of July 25, 2019.

During the Los Sueños Tournament, we shared with Ashley and Eduardo Lizano the plan for the upcoming season.  Bill Royster and his team also bought a tag.  We were now set to deploy three PSAT tags on blue marlin.  Would it take one day? Two days? Three days?   While we planned, board members and sponsors wanted to know if they could be a part of the study, catch these fish, and help deploy the tags.

The concept and the model for this study have resulted in the most amazing cooperative fish-tagging study ever.

We asked the team led by John Brownlee how we could catch three blues to tag? How could we include a large group? How could we make this a reality and share with the world this potentially great expedition?

John and the team at Maverick worked on the idea and came up with a plan that seemed doable: two boats for an overnight trip to the 80-mile seamount. We were able to invite up to twelve guests. If we covered the hard expenses of the trip, the expense of the boats and crew were on them! In a few hours of calls, the boats were full, and we were booking flights.

When we arrived in Costa Rica, the adventure began. Justin Poe of Accurate Fishing Reels planned a surprise welcome dinner at the home of Christian Bolanos, Gray Taxidermy Area Rep to Costa Rica. He brought a 10-pound rib eye and was waiting for the first group. We were joined by Stu Webber and Marlon Jacobs (CR Primo sponsor) and Alex Henry (Southernmost Apparel Sponsor) for dinner. We had a great time prepping tackle and telling stories of what we might expect from the upcoming trip.

Stu is a five-star chef in California and had no problem “doing his thing” with the U.S. beef, so he became the “go-to guy” for the food. The crowd buzzed with a single unanswered question: What are the chances we can catch three healthy blue marlin in one day?  We all felt the bar was set high but believed in the guys who do this.  Board member Carter Takacs from Marina Pez Vela was coming and was in constant contact awaiting the trip. We also had the commitment from Tracy Ehrenberg (Board member and Research Center in Cabo) that she was sending Rebecca Ehrenberg from Cabo because she believes so much in the work we are doing.

July 24, we all came together at the Maverick Center at 4 p.m. in Los Suenos for a ‘meet and greet’ while shooting a video with the crew of both boats and prepped for a 9 p.m. departure 80 miles offshore. We boarded our assigned boats and were rocked to sleep, chugging all night at 10 knots. The mates prepped rigs, and the excitement filled the room.

Our crew was Capt. Carlos Espinoza (Pollo), on boat one, the 50-foot “Sea Fly,” donated by Will Drost. The first mate was Jose Zuniga (Poncho), the second mate Esteban Gonzalez (Gallo). 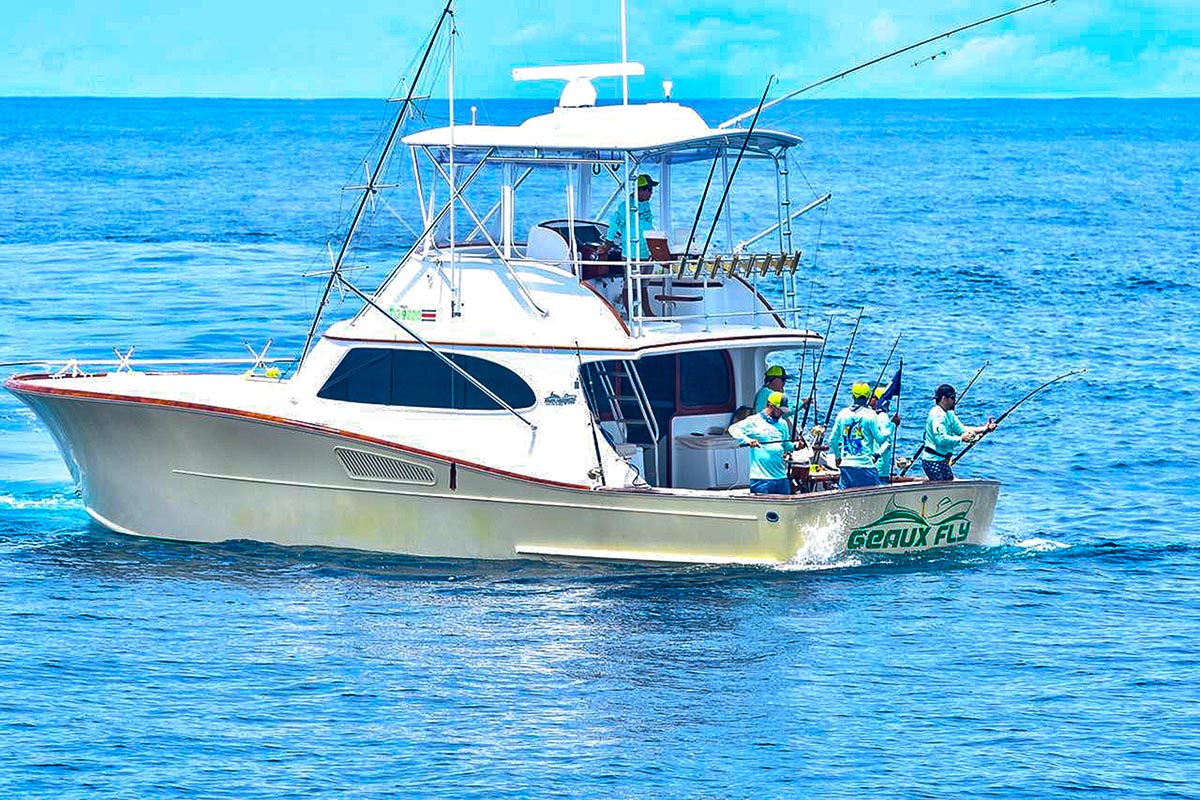 The second boat was the “Geaux Fly,” donated by Mitch Drost, captained by David Messen and crewed by Dempsy Avila, Eduardo Espinosa (Macho) and Christian (Chimpa).

The expedition was finally happening, and we were steaming to the unknown area where the stories had been coming. At 4:30 a.m., I was the first awake, followed by Pollo and Poncho. At 5, we deployed bait rigs and awaited the sun in absolutely flat calm waters, nearly 100 miles from land. 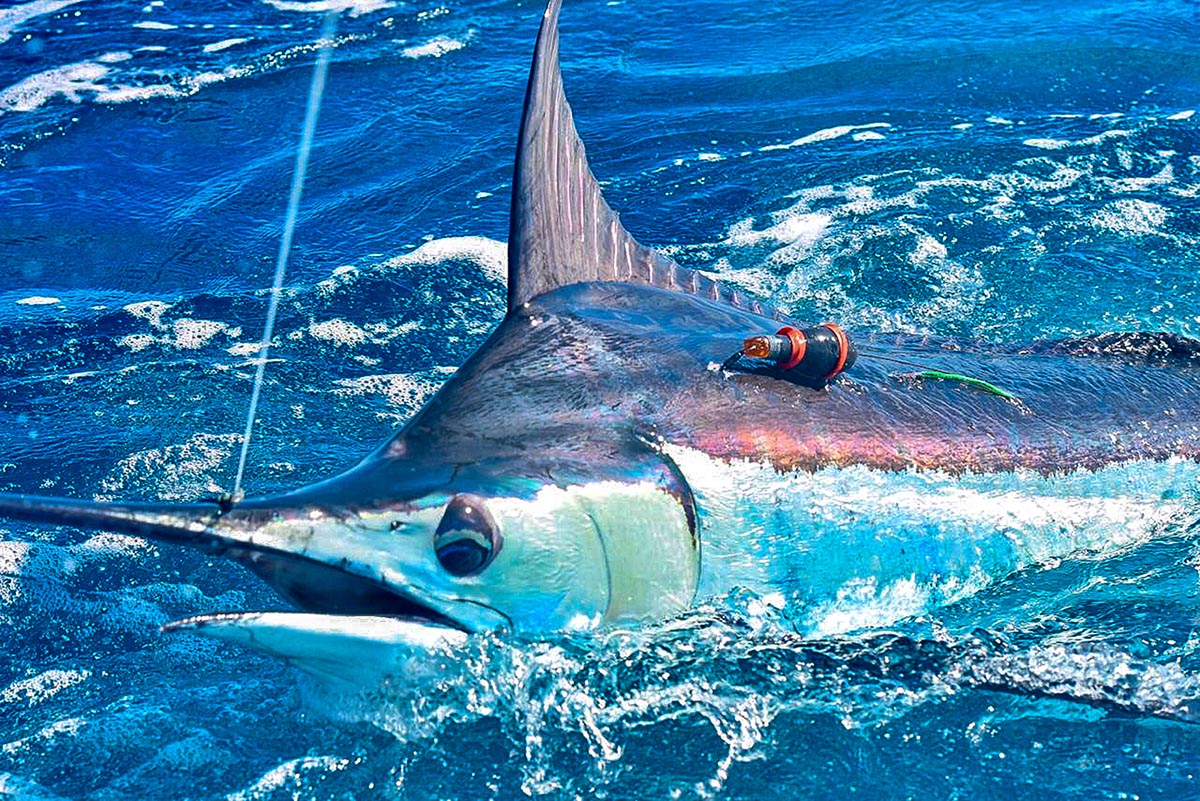 I assisted Poncho in the bait-catching project while he deployed the spread of lures and bait. We enjoyed about five minutes of quiet before all hell broke loose!

Poncho and I were the only two awake, and we had two monster blue marlin bites; we managed to catch and release one of the two before 5:30. While screaming and yelling, the entire team was up, and Alex Henry caught the first blue of the day. On the “Sea Fly,” we had approximately 16 blue marlin grabs, catching 12 by 1 p.m. We were able to tease one up and hook it on a fly as the countless stories continued from boat one. Our entire team managed marlin: Carter Takacs, two; Rebecca, three; Alex, three; Gallo, three; and I caught four.

The “Geaux Fly: (boat two) had similar results with a Grand Slam in the mix. They caught a blue, a sailfish, and a striped marlin in one pass and tagged them all with GFR green tags.

We were able to deploy two Sat tags aboard the “Sea Fly” and one aboard the “Geaux Fly” by 11 a.m.

These satellite tags are set for a six-month duration.  We await their release and the return of data. We expect some great information on a story that has yet to be told. We will share it with all of you as soon as it becomes available. 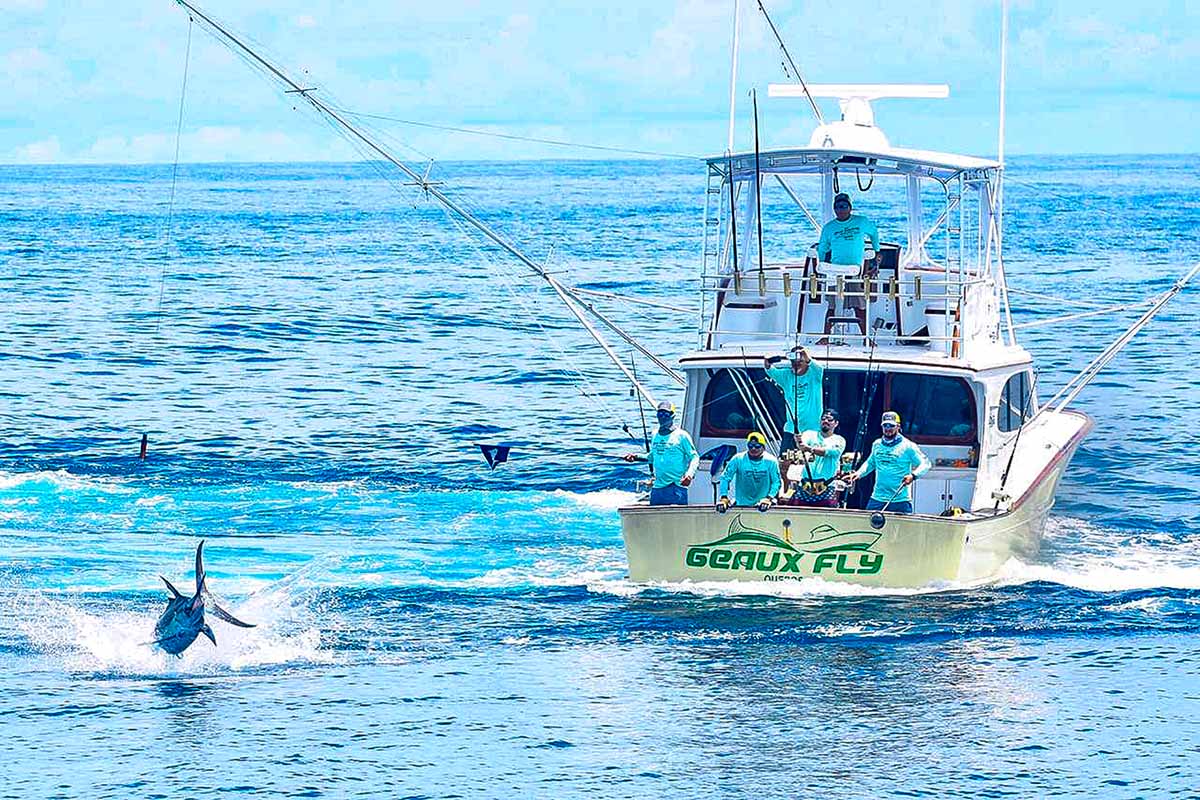 The fishing was epic; the people were exceptional, and the crew on each boat were like no others.  The boats were first class, and the experience was one that I will never forget. Our entire team agreed that they all had the best fishing trip of their lives and that they are ready to return.

The fishermen running these boats said: “We are family, Bill,” “We had the best time ever,” and “We are very interested in the tagging results.” The camaraderie was as good as it gets, and we are so thankful to all who made this possible.