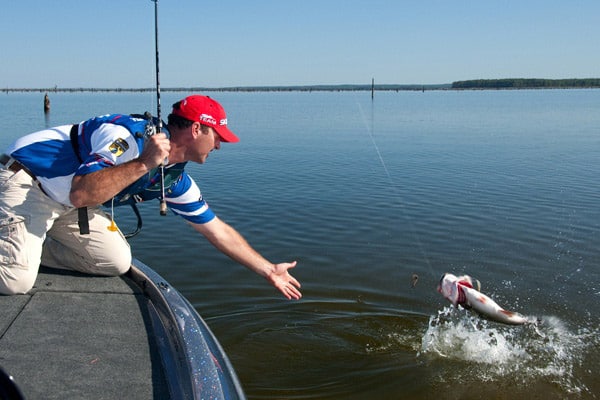 Although many bass fishermen have already put away their soft plastic lures and replaced them with crankbaits and jigs now as water temperatures get cooler, Todd Faircloth isn’t one of them. Instead, the veteran Yamaha Pro is still using soft plastic jerkbaits, creature baits, and worms because he can fish them slower but still impart a lot of action to them.

“On many lakes, bass are still feeding predominantly on shad, and I just believe the soft plastic lures imitate that type of forage better,” explains Faircloth, who will be fishing his 11th Bassmaster Classic® in February. “I can also rig a soft plastic bait weedless and fish it in heavy cover.” One of Faircloth’s favorite presentations for heavy cover is flipping, and for this he uses a creature bait, a lure with a fairly small profile but with multiple appendages that swim and flap as it falls. He can control the lure’s action, depending on how active the bass are.

“I’ll fish the creature bait around laydowns, boat docks, vegetation, stumps, and rocks, and I start by working it pretty aggressively,”

notes the Yamaha Pro. “Because it has all the legs and flat tails, a creature bait tends to glide through the water rather than falling straight to the bottom, so I hop it pretty high to take advantage of that gliding action. You can’t do this with jigs or crankbaits.

“I usually start by rigging with a 3/8 ounce slip sinker and 20 pound test fluorocarbon line, but if I’m fishing extremely thick cover, like the hydrilla we have on my home lake of Sam Rayburn, I may use a heavier sinker to help pull it through the vegetation. That cover is what holds both baitfish and bass shallow even in colder water, so that’s where I want my lure to be, too.” In slightly more open water, particularly the backs of coves and in tributary creeks, Faircloth often changes to a fluke-style plastic lure, generally described as a soft jerkbait. This is his favorite lure when he sees shad activity, but actually seeing the shad isn’t a prerequisite.

“With these lures, I make long casts and let the fluke sink a foot or two below the surface, then retrieve by twitching my rod so the lure darts erratically from side to side,” continues Faircloth. “I work them much slower than I do in the summer so the lure not only goes from side to side, it also sinks slightly when I stop moving it. “It really does imitate an injured shad when I retrieve it like this, and I catch a lot of bass fishing it around visible cover, normally in just five or six feet of water. Again, one advantage I have with this lure is that I can rig it weedless with a very light sinker and bring it right through tree limbs, brush, and weeds.”

In slightly deeper water, Faircloth may use a straight plastic worm, often called a stick-worm. He rigs with a 1/8-ounce sinker most of the time, but may opt for a heavier ½-ounce weight in clear water so the worm falls faster.

“One way I like to fish these baits is to let them fall beside cover, such as standing timber, underwater brush, and dock pilings, and then just shake them on the bottom without really moving them very much,”

concludes the Yamaha Pro. “In clearer water, I don’t want the fish to get a very good look at the lure, so that’s why I use a heavier sinker.

“Sometimes, especially on high pressure days after a weather front moves through and the skies are clear, bass don’t want to chase lures. Even though they’re still in shallow water, they stay pretty tight to cover, and that’s why I prefer these types of soft plastic lures. I can put them right into that cover and not worry about getting them snagged, but still impart plenty of action to them.”