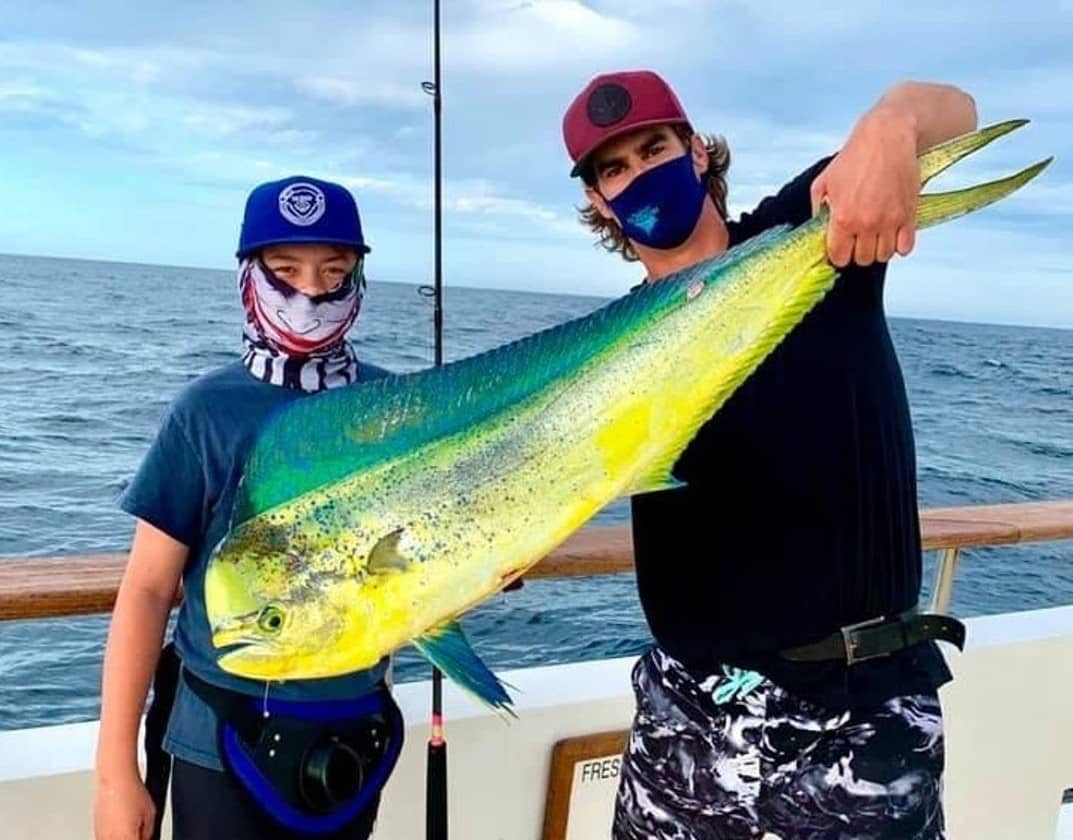 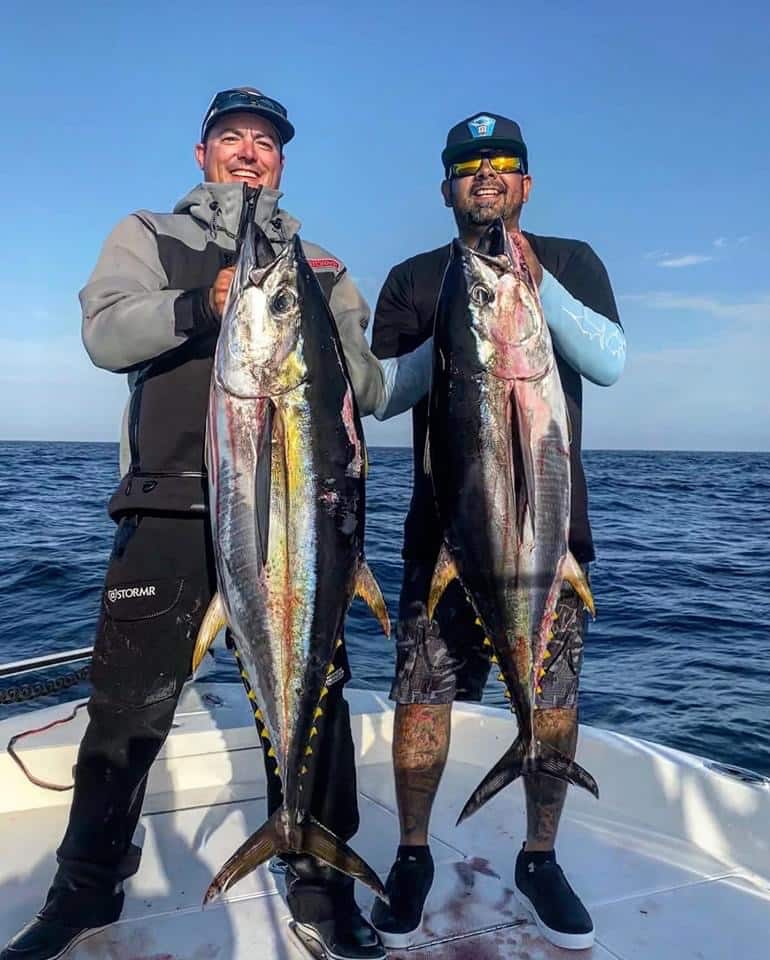 It’s been another good, if sporadic, week of fishing in SoCal waters. As expected, the northern gang bang broke up over the weekend as the bluefin off the west end of Catalina disappeared. Their departure left a lot of San Diego based overnight boats scrambling for something to catch over the weekend and quite a few of them ended up at San Clemente Island. I fished bass there on Saturday and saw more sport boat coverage than I’ve ever seen at the west end of the island. There were half a dozen boats anchored on the 9-Fathom spot, including a long range boat. The good news is that the yellowtail were somewhat cooperative that day and most boats caught fish. The even better news is that the fish started biting again offshore so I won’t have to be weaving around sport boats while trying to fish bass at the island.

Speaking of offshore fishing, there’s a lot of it to cover this week so let’s take a look at our Navionics Chart. 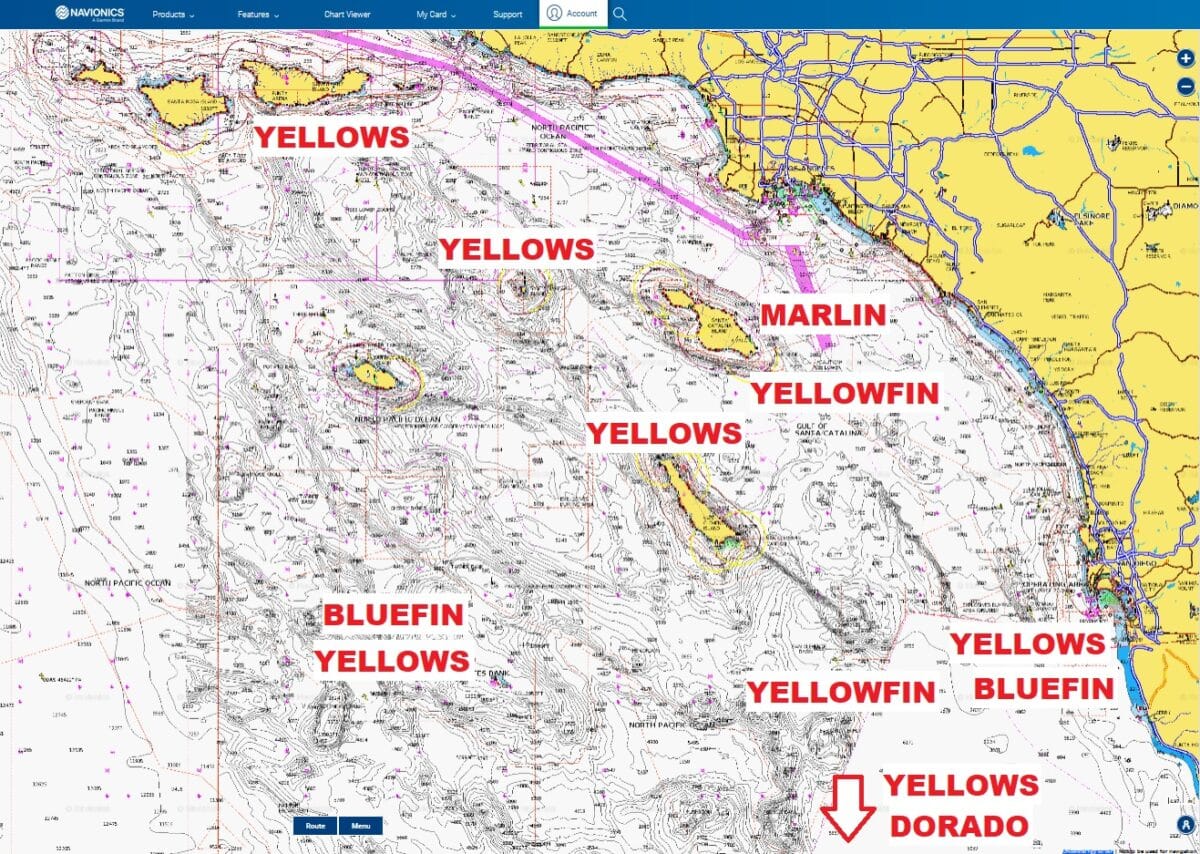 Starting up north, there are some yellows biting at Santa Cruz Island. The deep drop guys are also catching swordfish up there and I wouldn’t be a bit surprised if a few marlin and bluefin weren’t swimming around up there too. There were yellows and some bluefin biting at the dirt clod but SBI did it’s normal thing and stopped biting as soon as a few boats started fishing the island. 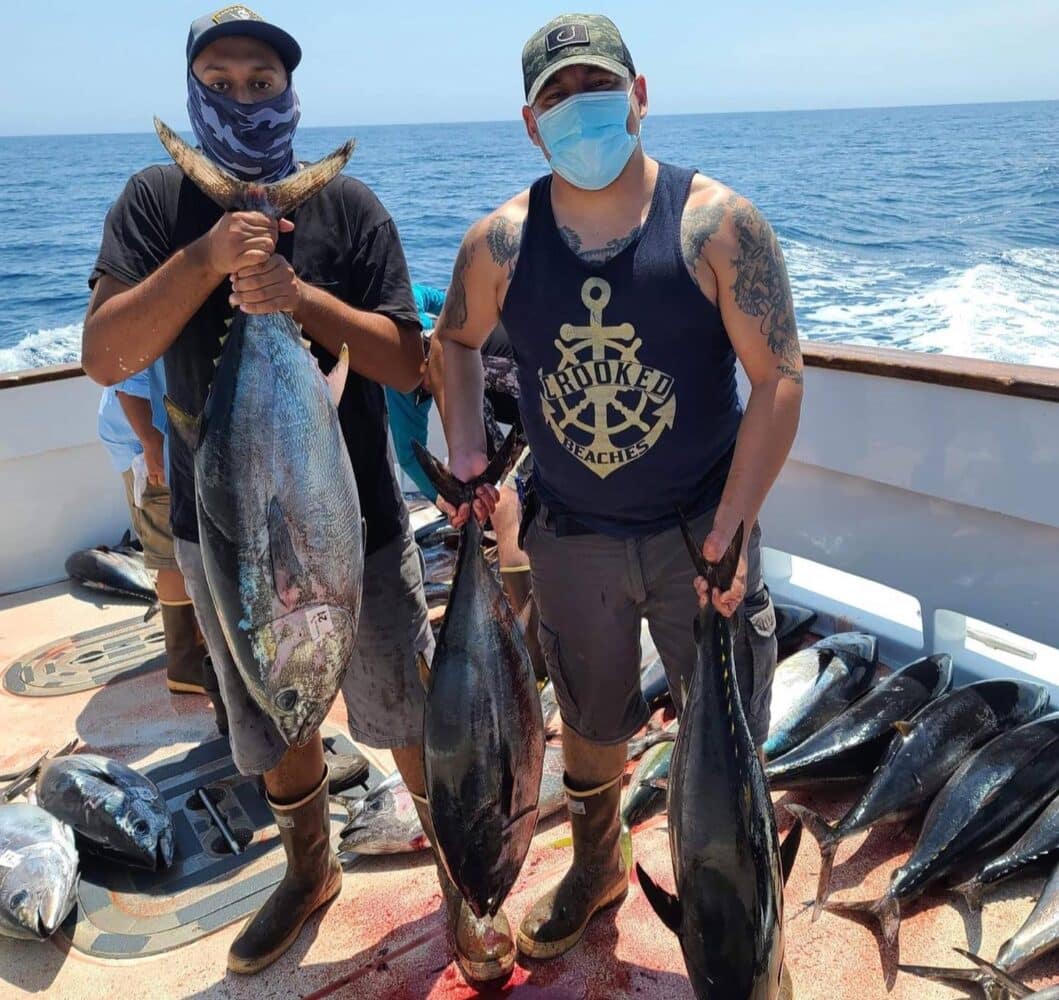 Moving to the west, the bluefin tuna are biting well for the boats fishing the Cortes Bank. Boats from San Pedro to San Diego are making the long run on overnight and 1 1/2-day trips for what can be easy limits on some trips. These fish are in the 20 t0 30-pound class, with a few exceptions above and below and are biting fly-line sardines on 20 to 25# fluorocarbon and a #2 to 1/0 hook. The boats are also catching some nice yellowtail. If you have any interest in fishing the Cortes, I’d recommend jumping on a 1 1/2-day trip as you’ll get a lot more fishing time than you will on an overnight boat. 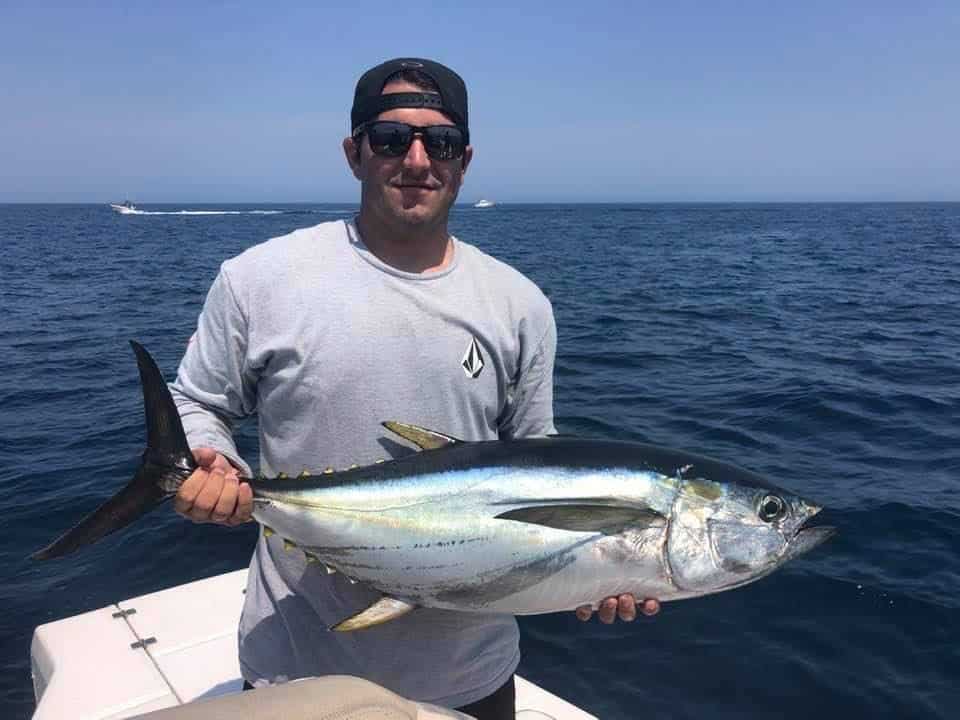 Heading back towards the beach, there have been spots of yellowfin popping up off the east end of Catalina Island. We stopped on some terns on the way home from Clemente on Saturday and marked a huge spot of yellowfin just inside Catalina but they were down 20-fathoms and not biting the jigs we dropped on them. My friends Gary Reyes, Jay Jones, and Mike Stembridge, drove through that same zone four hours later and those yellowfin were up and biting. They ended up going two for three on topwater baits.

On Monday Jimmy Decker, Matt Kotch and I went out to fish marlin at Catalina. The morning started off strange when we attempted to catch mackerel at the Newport Jetty and ended up with our bait snagger fully loaded with 10-inch long bonito. On our way to the island, we saw some dolphin with birds on them inside the shipping lane and as we pulled up we saw yellowfin jumping among them. We gave it a few fruitless casts before continuing on. We ended up getting one knockdown later in the day on the same pink lure that caught our last fish but it didn’t stick. After we got tired of marlin fishing we made a big loop from Cat down through the inner banks but didn’t see any tuna. There was a ridiculous amount of anchovy everywhere though. 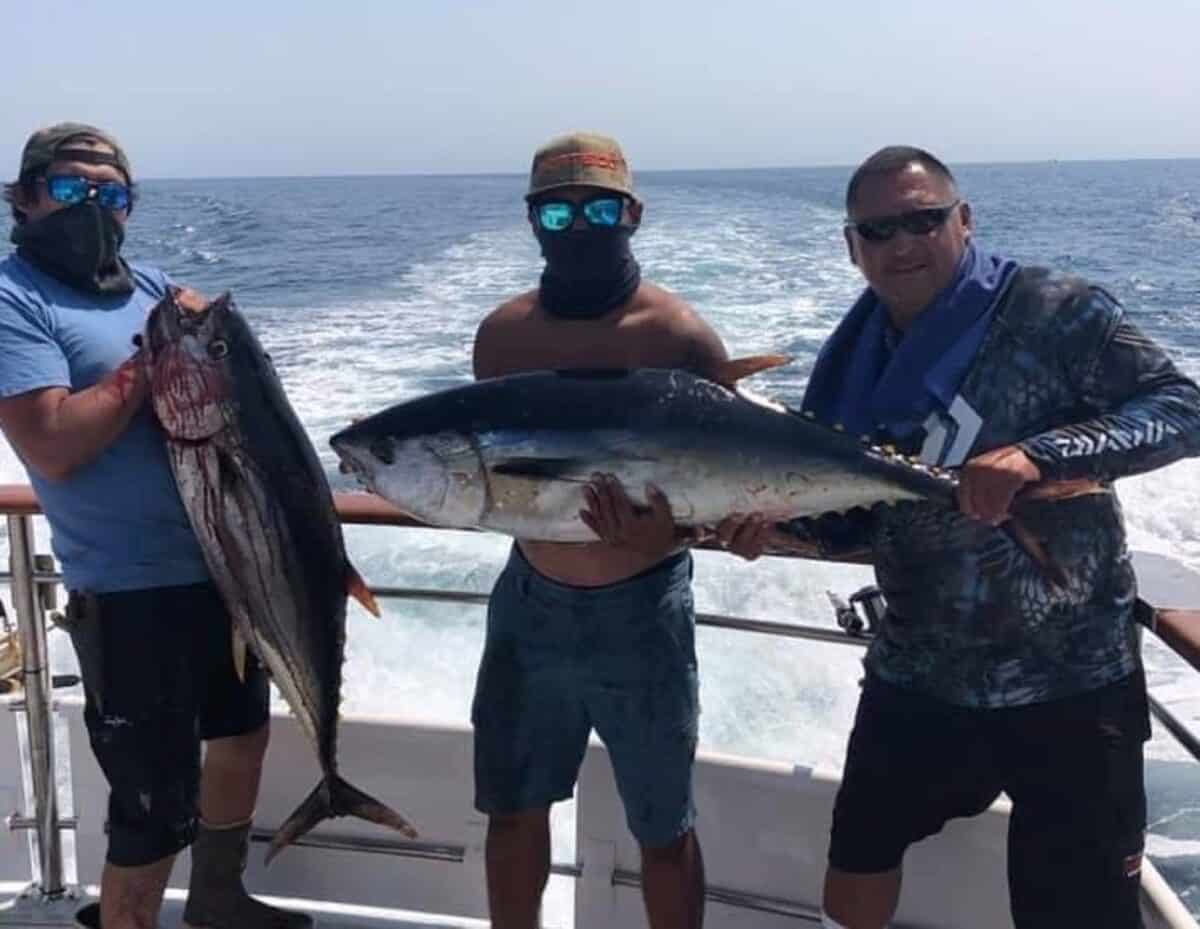 There were a couple of yellowfin caught off the east end of the island on Monday and a few more on Tuesday. By Wednesday it had become another gang bang and if those fish hang around until the weekend, I’m sure it will be completely unfishable. The good news is that on Wednesday there were also some reports of fish being seen in other areas nearby so if you’re willing to spend the day looking around you can probably find something to have to yourself.

Heading down south, the yellowfin that had not really been biting for the boats out of San Diego slid into US waters late last week and got hit pretty hard by the seiners. There are still some yellowfin biting outside the 43, but that’s a pretty long run to make for a not so sure thing. As a result, the full-day boats have mostly been fishing the Coronado Islands and while the fishing is better some days than others, you’ve got a chance of catching both yellowtail and bluefin tuna. The overnight boats are making longer runs south where they are finding very good kelp paddy fishing for dorado and yellowtail. While that might not sound as exciting as catching big tuna, the good news is that the offshore season is still young and I’m sure we’ll see plenty more good fishing in the coming months! 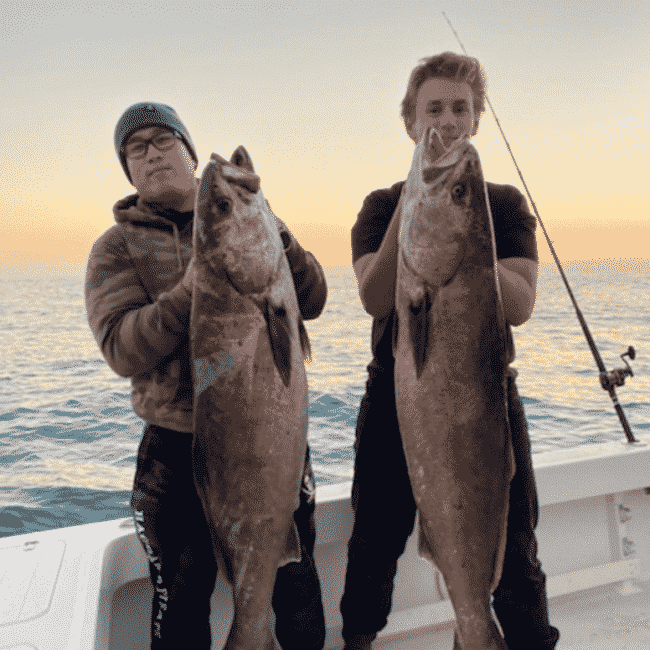