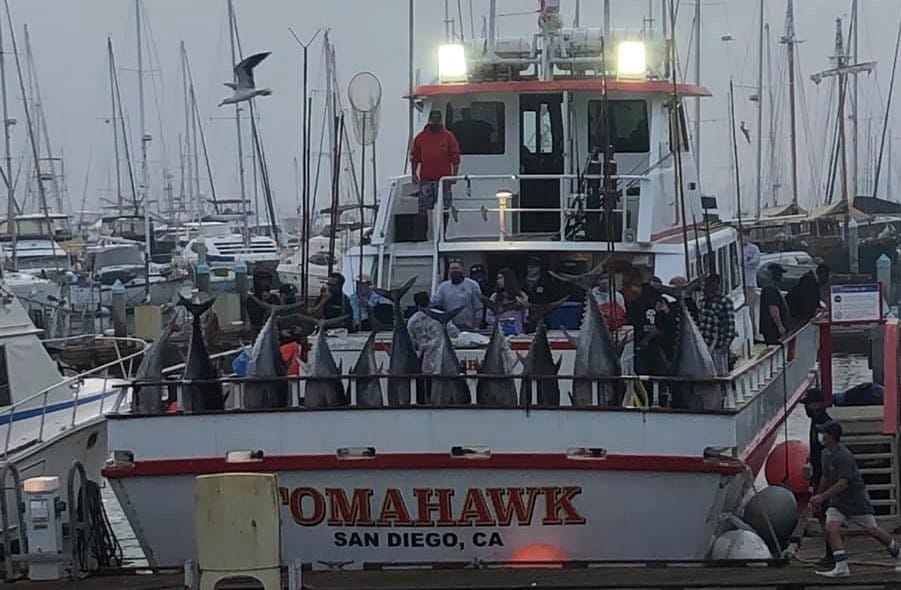 At the risk of sounding like a broken record, it’s been another really good week of offshore fishing in SoCal. Though boats are having to make longer runs to catch them, the big bluefin continue to be the stars of the offshore show. The Tomahawk out of Fisherman’s Landing recently returned from a 2 1/2-day trip with thirteen triple-digit bluefin including a 350-pound boat record, a 346-pounder, and six fish over 200-pounds.

The boat also landed seven yellowfin from 30 to 60-pounds. If you’re a sport boat fisherman who wants to get in on the action, I recommend booking a trip ASAP, but if you’re a private boater you may want to wait a bit as the offshore weather is not looking small boat friendly this weekend. 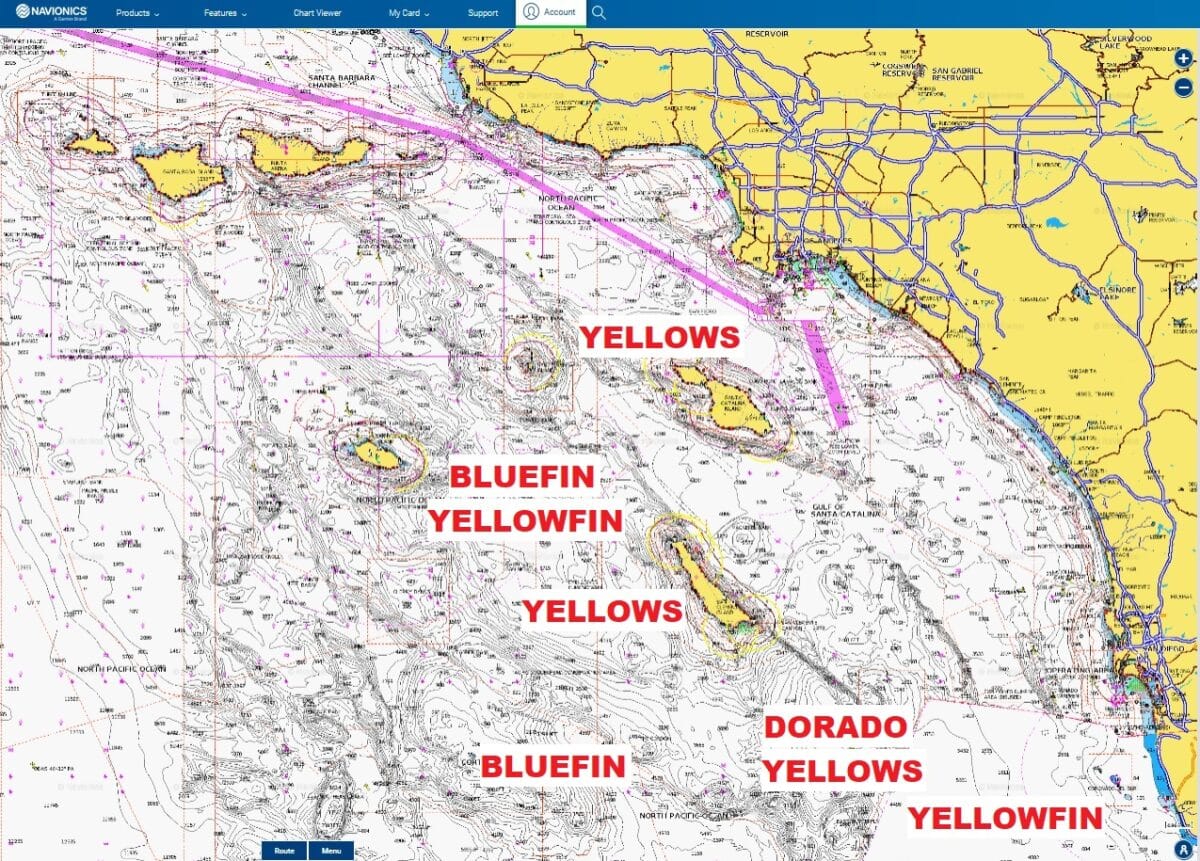 As you can see on this week’s Navionics chart, the bulk of the fish are 60-plus miles offshore, and with the wind forecast to blow in the low teens from Friday through Sunday, it’s likely to be a little sporty out there. The breakdown on the tuna zone is that there are some mid-sized to big bluefin out on the Tanner and Cortes and there are small to big bluefin, along with 30 to 70-pound yellowfin scattered around above Clemente. While most boats are fishing at least halfway to San Nic there are fish scattered around in the triangle between the west end of Clemente, the west end of Cat, and the Dirt Clod. 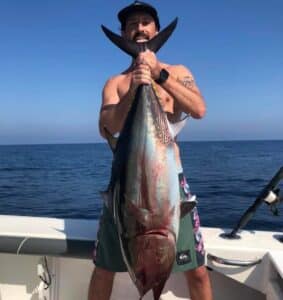 I fished San Clemente Island on Saturday with Jimmy Decker and we had good bass fishing on the west end. We also had good yellowtail fishing, that was actually bad because they were biting weedless swimbaits in the middle of very heavy kelp. There were two grades of fish biting, 10-pounders, and 30-pounders. We ended up going 2 for 6, landing the small ones and getting destroyed by the big ones. Got tired of losing fish, so we left them biting and decided to take a look offshore.

Knowing that there were tuna approximately 20 miles north of the island, but not having the gas or interest in making that long of a run, we cruised along the fathom curve on the edge of the San Clemente Escarpment towards the 499. We hadn’t even made it 7 miles when Decker spotted a breezer of tuna. Decker fired a popper that he had tied onto one of the new Penn Fathom baitcaster reels, that we were out there that day to shoot a commercial for, and was bit on his first pop. Sadly that fight was extremely short-lived as Decker’s drag was still hammered from the earlier yellowtail fiasco. Luckily the fish stayed around and he was able to retie and hook another on his next cast. 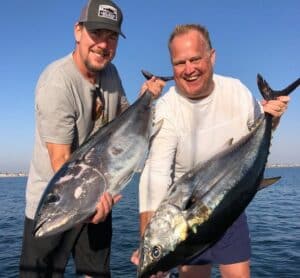 Once he’d boated the 30-pound fish, we went looking for the fish again but couldn’t relocate the breezer. We got the binoculars out, picked them up and they landed right on a huge foamer of bluefin about a mile away. The fish were down by the time we made it to them but another foamer soon popped up and Decker was on again. I had injured my hand earlier in the day and wasn’t up to fighting a bluefin, so I cast a subwalker into the foamer, took two winds, came tight, and handed the rod to our cameraman Matt. The fish was snagged in the side of the head so Matt got his butt kicked.

At that point, it was way later in the day than we’d planned on fishing, so we pointed it for home and looked on our way. We did find one spot of sheerwater birds acting fishy and stopped on them to take a look. We put Decker in the bow as we slid up to them but told him not to cast when I saw a fish pop up because they were way too big for the gear we had. There have been fish scattered around a pretty big area in that zone for at least a couple of months now and some days it’s not real easy to find, but it beats making a super long run or fishing with the fleet. 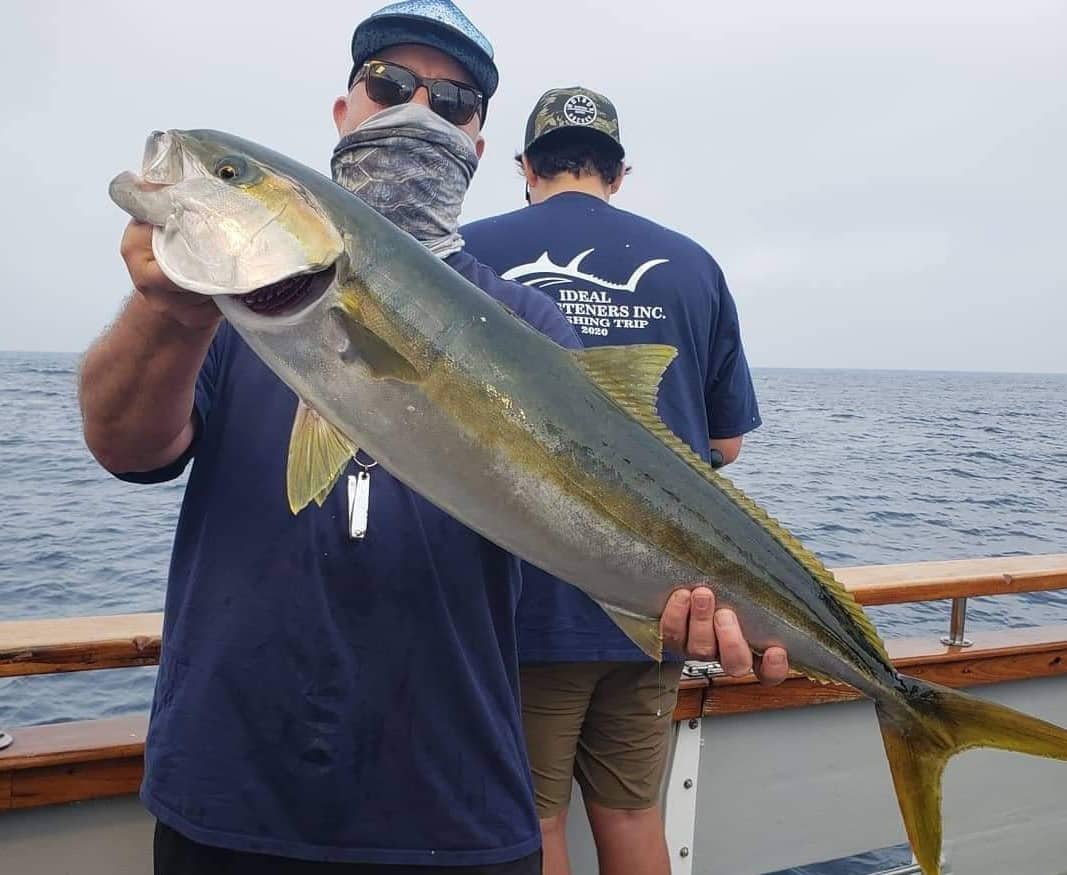 The yellowtail have been biting at both San Clemente and Catalina islands and the boats that have been finding them in places other than the middle of really heavy kelp have been catching some nice fish. There are also bonito biting at both islands. From what I’ve seen at Clemente over the last few weeks, if you’re a bait fisherman you could probably anchor up on the up-current or outside edge the kelp, chum a little, and have a shot at catching some yellows. All of the yellows I’ve seen at the island over the last month have had birds on them, so looking for terns or gulls working is probably a good first step in finding fish. 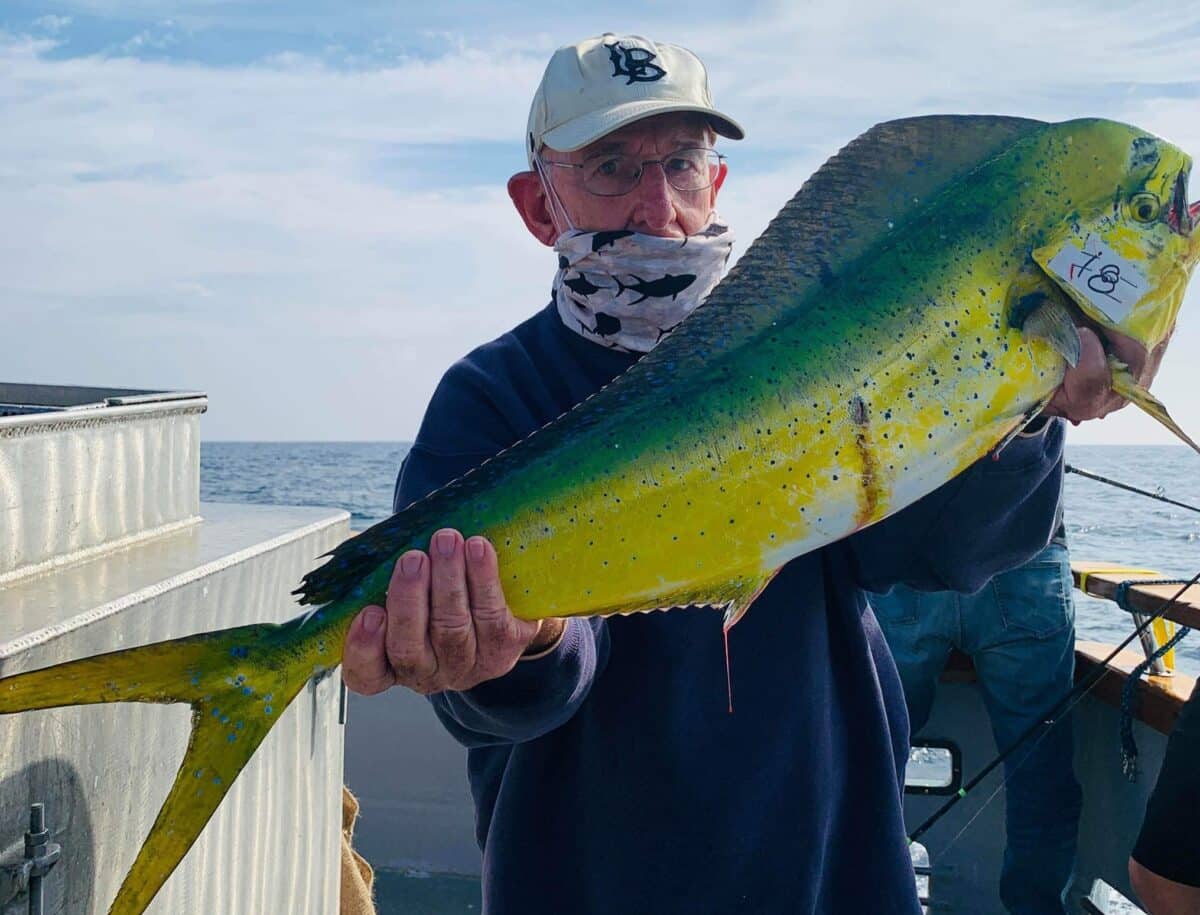 Full day and overnight boats from Newport Beach to San Diego are still doing pretty well on smaller yellowfin, yellowtail, and dorado. The dorado are biting in US waters but they are mostly all below San Clemente Island. I looked at several paddies in 75-degree water above Clemente and outside Catalina but they were all bare. The good news for the guys fishing out of San Diego is that the weekend weather looks better in the local offshore zone than it does to the west so you should be able to get out and catch some fish in decent weather. Good luck this weekend! 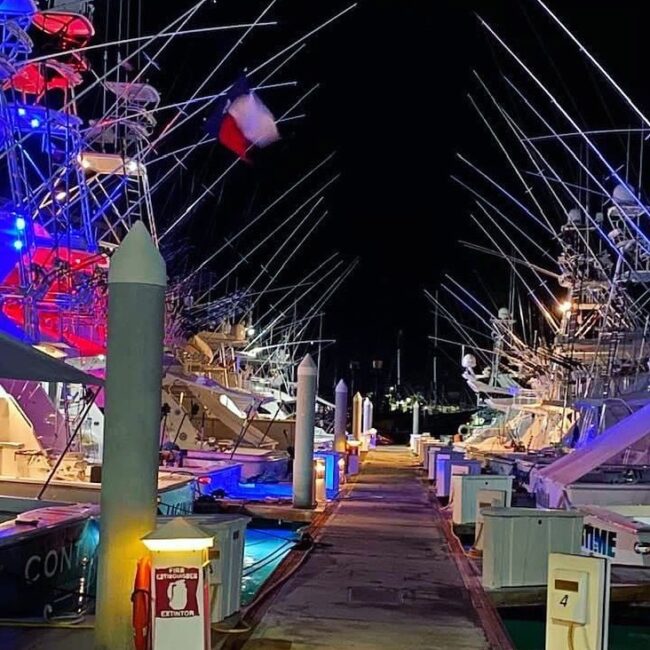 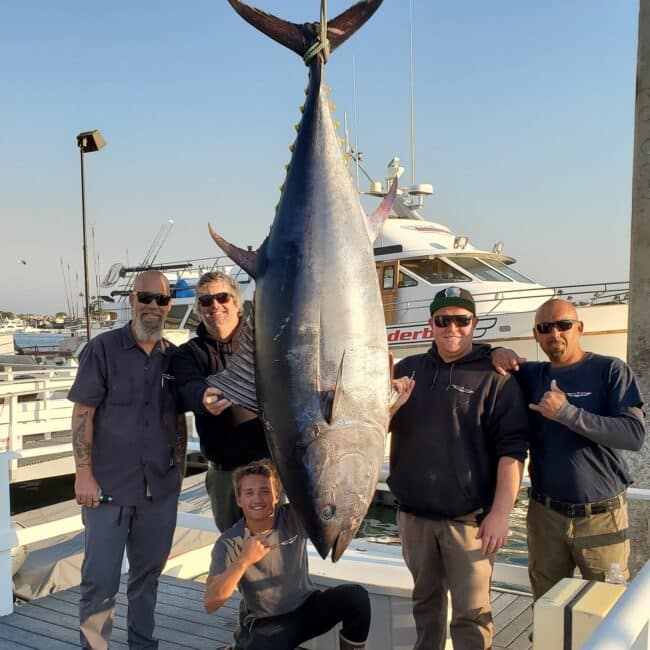 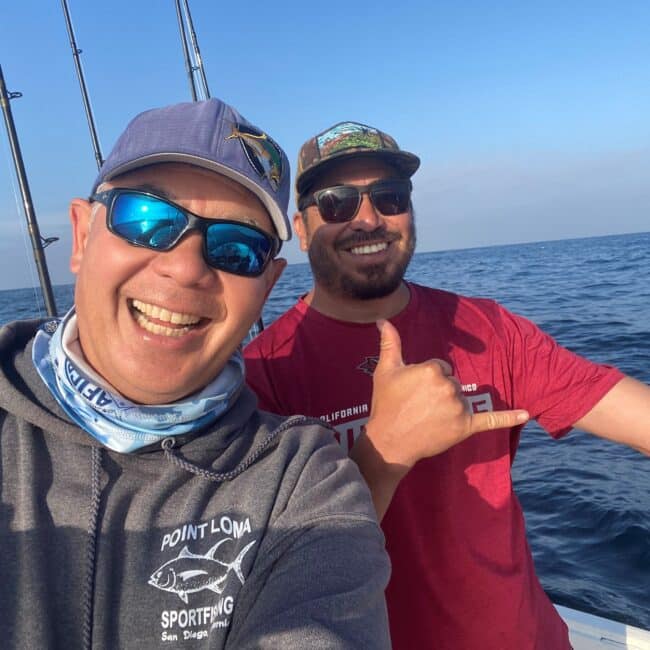